My first day as a Canadian Gypsy with my sister was more exciting than I thought. I figured that the first two days of driving through Ontario would be the most dull but despite the fog and rain, the ferry ride was fun, the geography was stunning, and 3 odd animal sightings! 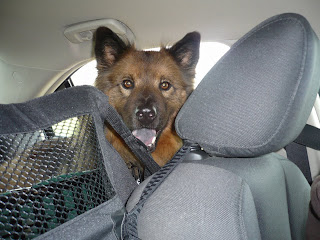 Augh, 5:30AM wake up and packing of the car. Shelley and I finally escaped her driveway (after I had to run back in to get the maps I left on the kitchen table, needed those!) at 6:40 AM. 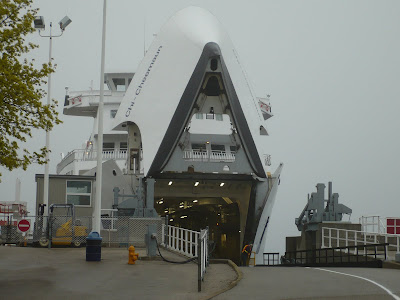 We had to be in Tobermory to board the Chi Cheemaun ferry an hour before our 8:50 AM departure time. We made it and I had a chance to go check out the front of the ferry. 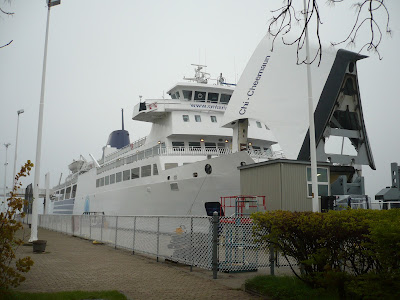 The Chi Cheemaun leaves from Tobermory and unloads it's passengers in South Baymouth. The trip takes 1 hour 45 minutes and threads between the uninhabited Tobermory Islands. 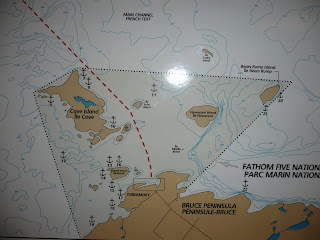 It also travels over the underwater Fathom Five National Marine Park. There are many shipwrecks from the time when captains had only charts, compass, sounding line, and their wits to guide them. As you can see from the map, there are lots of islands, and lost of places to hit rocks and sink. 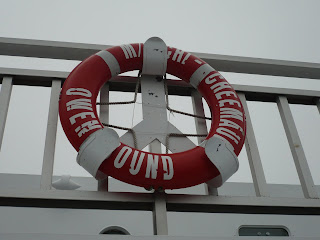 Just in case, Shelley and I scoped out the safety equipment and hoped not to sink because all our stuff (and Dante who was in the car hold) would be gone.

Obviously we survived to tell the tale of our crossing 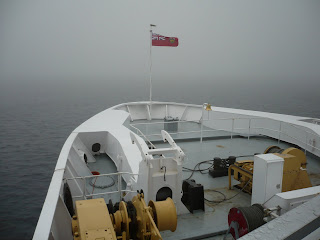 Despite the fog, obscuring the view the whole way, it was still a great experience. Traveling through the fog was terribly unnerving. We couldn't stop humming the Pirates of the Caribbean Disney song as it reminded us of the beginning of the first movie. 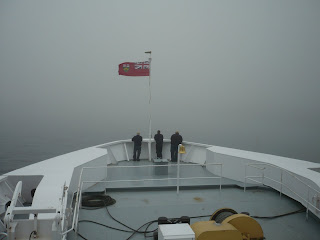 It was very interesting to watch these crew men help guide the ship into South Baymouth.  The fog was so thick they had to be the look outs to indicate the buoys less we go off course on the rocky shoes. 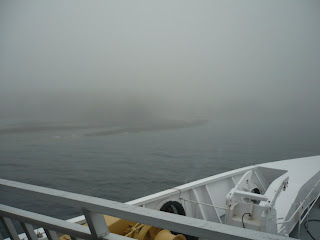 Shelley and I were disappointed shortly after embarking on highway 6 to discover that there is no sign to pose by for The Mounted Animal Nature Trail. If you are unfamiliar with this song you can listen to it on this youtube video: http://www.youtube.com/watch?v=5H-uLvhDGBw. We found the park, but in the years since the Arrogant Worms wrote this song, the place has become a whole nature resort. We listened to the song anyway as we drove by. 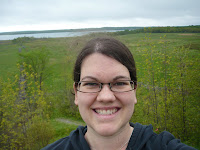 I had to touch Manitoulin Island so we pulled over at a scenic look out overlooking the Strawberry Channel. 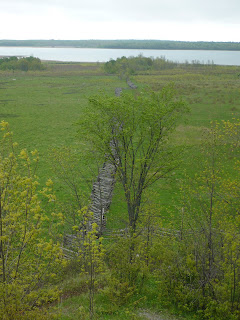 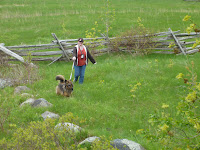 Dante also had a chance to get out of the car and let any passing wildlife know he was there. He did not find a monocle, but he did make Shelley's feet very wet in the long wet grass in his search attempt.

Wolf Sighting and Bird Attack
About 10 minutes south of Espanola, through a break in the trees that led to an abandoned railway (the tracks had been ripped up at some point) I saw a wolf walking along. Terribly exciting, though of course it happened to fast to even think of grabbing a photo of it.

Between Spanish and Cutler road, Shelley's car door was attacked by a bird. The car won and we left the carnage behind us.

Shelley had read online somewhere that there was a giant statue of Paul Bunion and his blue ox Babe in Blind River, Ontario as a road side attraction. We were excited to see Paul and do a pose with him. 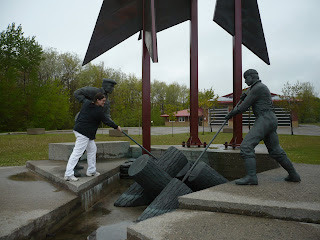 Unfortunately we never did find him, but we did find the National Logger's Memorial and they looked like they could use my help. 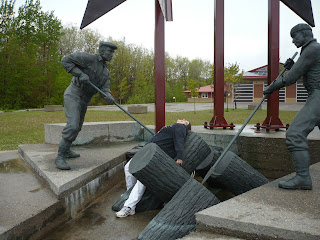 They didn't think so. (Yes this is a memorial but I believe big gruff loggers would find this funny) 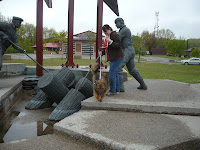 Dante did not find his monocle here either. To show his displeasure he marked the OPP station wall. We left quickly after that.

Just west of Iron Bridge Shelley saw an omen of 4 buzzards sitting in a row on a fence. That of course set off a short round of "4 Short Neck Buzzards."

Sault St. Marie on a Dime
Unbelievably, due to 2 hours of travel on the Chi Cheemaun and not on the road, we made it to Sault St. Marie on half a tank of gas.  We rocked our way into the city with Lady Gaga, and the drive-by look I got of Sault St. Marie was that it wasn't really anything special and I couldn't put my finger on a description. 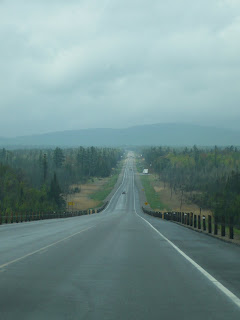 Shelley told me it's a steel town and is pretty much the Hamilton of Northern Ontario. That was the description I was looking for. It had the same feel, but with less flames. Also who knew it was so hilly north of the Sault - certainly not me. 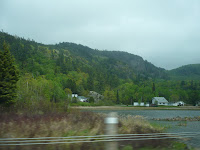 When leaving Sault St. Marie Celine Dion's All By Myself started playing and Shelley and I amused ourselves in realizing that it is my dog Andy's theme song. If anyone has a cover sung by someone with a deep voice I would appreciated it. 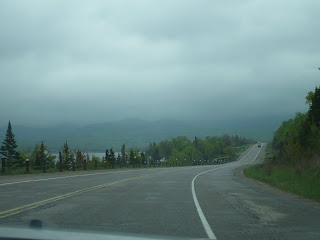 Starting around Batchewawa Bay (above) we started to see signs for Agawa Crafts. The first one got our attention because from a distance it looked like they had a dog on their sign. Every successive sign (and there were many starting as far as 24 km away) we would discuss what type of creature it was. 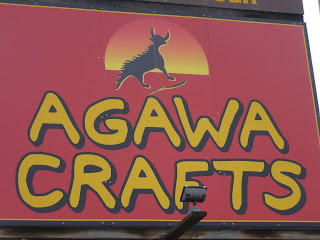 Our concencis was that it must a Lesser Lizard-Wolf-Demon. We stopped by the craft place but no answers as to the name of the species of animal depicted in their sign was found. 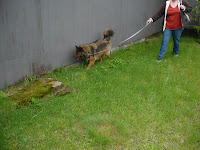 Dante took this opportunity to enter the forbiden "private walk area" which instructed us to use the "designated pet area". I in my infinite understanding of the English language took this to mean that it was a private walk area designated for pets. Dante has started a habit of letting animals know he was there in forbidden places along this trip. 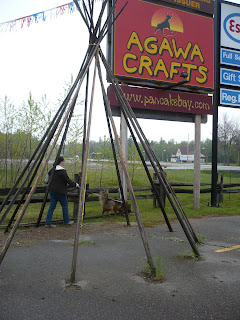 No monocle was to be found here. Dejected, Dante reentered his tiny space in the back of the car and determined to blame someone, took to barking at the odd truck (and only trucks) that passed in the opposite lane.

Lake Superior Provincial Park and Alora Bay
Tomorrow I will be seeing a lot more of Lake Superior. But I couldn't wait for better photo ops. I was just too excited to see Lake Superior from the ground (I've only seen it once from the air). 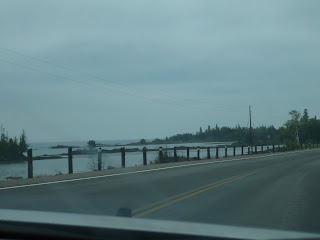 Tomorrow hopefully I will touch it! 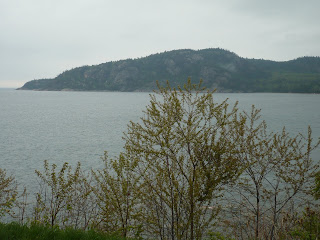 Alora Bay photo platform. But it's pretty much Lake Superior. 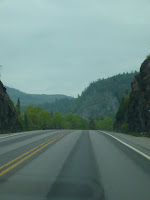 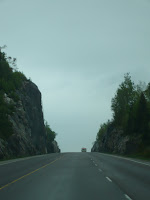 Lake Superior Provincial Park was very beautiful, even overcast. I'd love to go on a canoe/camping trip here someday. Lots of hills but no moose. We did see a fox carrying it's kill in the ditch though. It was much larger than the scrawny foxes I've seen in Southern Ontario. 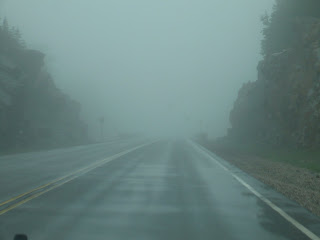 Our day ended as it began. In the fog.

I probably won't remark to much on some of our other accommodations along the route, but this place is fantastic. I can't recommend this place enough for people traveling with dogs. The owners love and understand dogs and are extremely friendly. 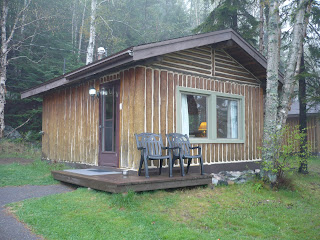 , We are staying in a cabin that sleeps four, have a flat screen TV, free movie rentals, kitchen and free wi-fi (which is why you are getting an update today, don't expect it everyday) 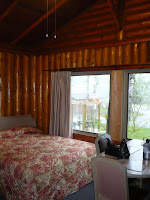 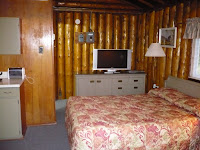 Dante is extremely tired from his trip. We suspect he had a nap on the ferry but didn't really sleep other than that. He loves the cabin and has decided that the table is the best place to sleep under for the night. 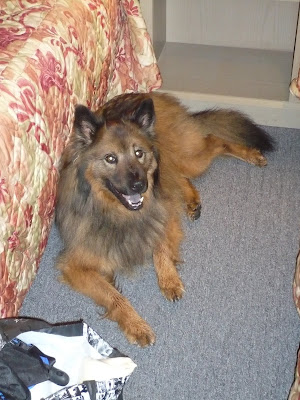 He has the right idea. Shelley is already asleep for our trek to Kenora tomorrow. I no longer assume the day in Ontario will be dull as today was much more exciting than I had expected. I am on a moose watch.