Click the link under the map for a more interactive map. You can select the bubbles to see the name of the event and a short description. Most green and yellow bubbles correspond with photos below. 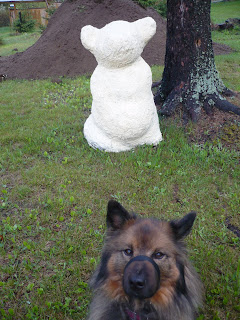 While I ate a breakfast of oatmeal, washed the dishes and packed the car, Dante and Shelley went for a morning walk.  The front of our cabin site had about 7 of these tiny statues that look like they were made out of butter.


Dante is not amused at having to pose by the Butter Bear.


Shelley and Dante then found a hidden gem behind our cabin site. We bring you the most terribly unsafe ski lift ever! 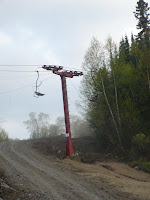 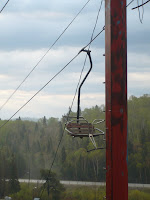 And we finally got to see some sun, for awhile anyway 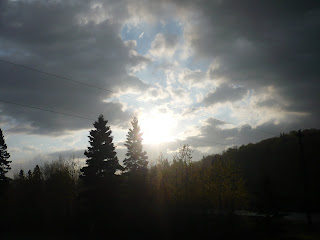 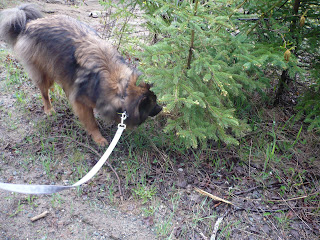 Dante searched the area high and low but still did not find a monocle. He is sad as he does not look distinguished enough without it.

Magpie High Falls
We were interested to know why our cabin was called the High Falls Motel and Cabins. So we checked a local map and sure enough, there were High Falls nearby. Before entering Wawa we traveled about 5 minutes down a terribly maintained dirt road and were rewarded with the scene below. 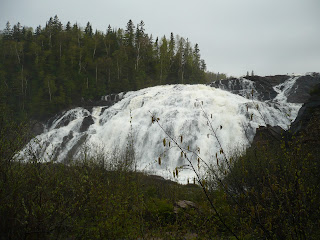 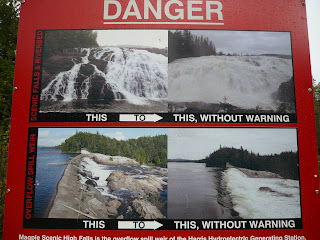 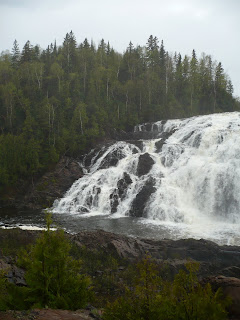 The Magpie High Falls is the overflow spill weir of the Harris Hydroelectric Generating Station. The water level, and flow can change without warning and at any time. It is extremely dangerous to ever enter the river bed below, even when the water is lower in the summer. 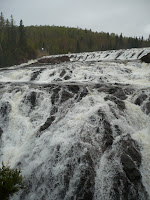 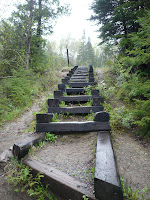 The Magpie River flows from Esnagi Lake and empties into Lake Superior. The bedrock is pink granodiorite and is more than 2500 million years old from the Precambrian Era. We may not have historical buildings in Canada more than a few hundred years old, but we certainly have old rock formations. 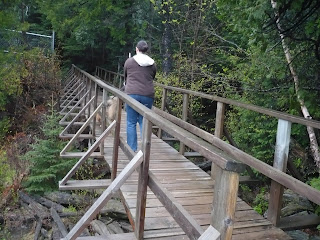 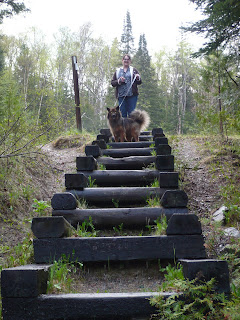 Dante enjoyed the extra morning exercise and really didn't want to get back into the car after the trail.
Wawa
The proper pronouciation of Wawa can be heard here: http://www.sadtrombone.com/, click play and turn your sound on.
This is not to say that Wawa was a failure but so you can know how Shelley and I referred to Wawa on Day 1 and continued to do so today as well. In actual fact Wawa was one of the highlights of the day (though they do "grab you by the short and curlies" with regards to gas at $1.459/L aside, but did provide us with the great quote of the day regardless.)
Most people think Wawa and think "Big Canadian Goose", but no one ever mentions the fun stuff to do on the way to the Big Goose.
No one mentions how there are three of these happy guys! 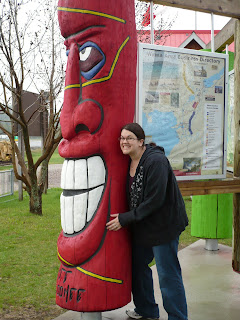 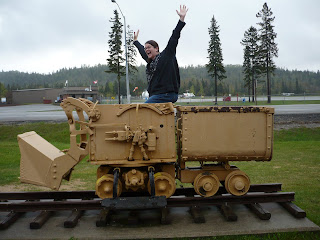 Or that Wawa was once a mining town. And that Sir James Dunn, who was instrumental in the rebirth and growth of Wawa and Sault St. Marie in the first half of the century, was "an articulate and outspoken businessman with a personality that demanded respect." In layman terms, he was an ass. (That's my translation of a sign about him)

No, all anyone EVER mentions is the Big Canadian Goose. 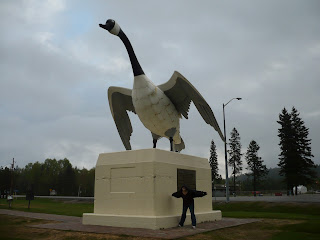 Probably too much fun for 8AM on a Sunday morning 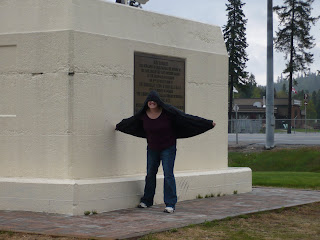 Canada's REALLY Big, or Rocks and Trees with the occasional Water
The title says it all. 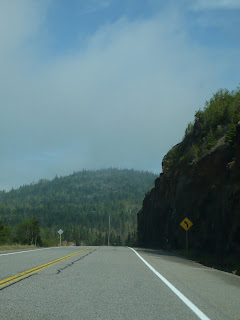 As Shelley and I turned onto highway 17 west from Wawa, we played the Arrogant Worm's Canada's Really Big, just to remind ourselves that yes, Canada is REALLY big.  That song was followed by their song titled "Rocks and Trees". If you search for these songs and listen to them, that was essentially our day.
There were some highlights along the way, such as what I suspect is a new growth forest from an old forest fire. 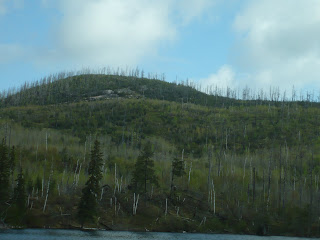 This area of forest lasted from the town of White River to the base of White River Lake. On the google map, you can actually see the change in colour from the satellite image and it shows you how large this damaged area was. It was very interesting to see large section of low brush interspersed with the limbless, leafless trunks of poplars sticking up like a buzz cut on the land.
Lake Superior and Black Bear Sighting
The fog descended upon us again as the road drew nearer to cold Lake Superior.
Due to the fog, and the abrupt transitions from rock to lake of Superior (ie lots of cliffs), I had given up hope of being able to actually touch it.
Losing my goal of touching Lake Superior was sad but I moved on to my other goal of finding a moose and at every "Moose on the Loose" sign I demanded loose moose. Just past highway 614 enroute to Marathon, I glanced over to the side of the road and was stunned to see a black bear sniffing the air much like my dog Andy does. I hadn't even dared hope that I would see a black bear, unfortunately Shelley missed it as it happened quickly - such are the hazards of a road trip.
The fog made the rocks slippery, as I learned first hand going closer to the edge to take this photo. I now have the bruise tail bone to testify to this fact. 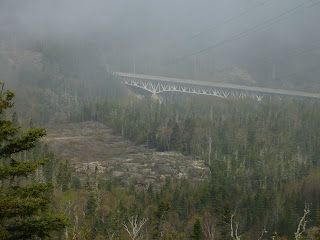 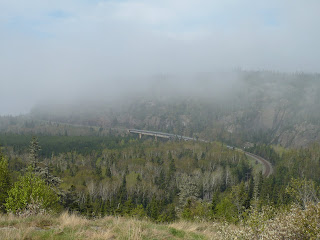 Lake Superior is there somewhere beyond the fog of this photo. These were taken from a scenic rest spot just past Ney's Provincial Park.
Noticing on the map that we were about to enter bays at the top of the lake, and this would be our last chance to try to access Lake Superior, and wanting to avoid pay a provincial park fee to access Lake Superior (as is the thrifty Gypsy way),  Shelley did some fancy driving and succeeded in finding a back road that led us to a place we could crawl down and test the waters.
As expected, it was cold - yet somehow it was still unexpected when I actually stepped in and had to stay in for the photo. But at 11:35AM I successfully touched Lake Superior. 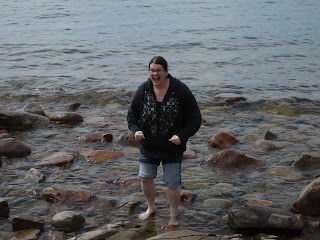 Shelley demonstrates the proper way a true Canadian enters the frigged waters of the north. It's good practice for her in Prince George. 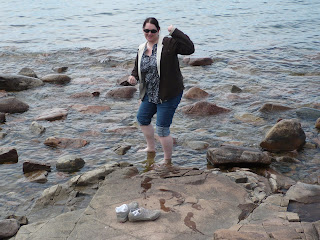 Due to the Wilson Island's close proximity to the shore, we were able to get a stunning shot of Lake Superior sans fog. (or as Shelley coined it, the Cleavage of Lake Superior) 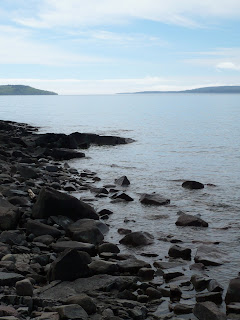 Goal one of the day complete, now all I needed was to find my "Moose on the Loose".
Baby Black Bear and More Rocks, and Trees, and Water
Still lamenting the lack of loose moose (Canada's REALLY big remember and entertainment is low on this route) I was even more surprised to see a baby black bear on the right side of the ditch chowing down on some tasty plant life. No mommy in sight but Shelley had a chance to see this one so that makes me even more happy. So TWO black bears, yet no moose :'(.
Then around Nipigon, something happened to the rocks. They turned red! 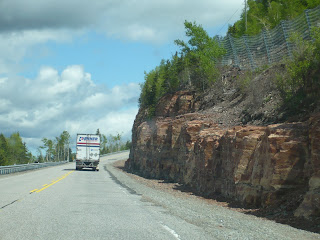 Let me remind you that we have been on the road since 7:10AM with a dog that likes to whine in the car, and occasionally bark at oncoming trucks, and have been staring at rocks and trees for hours. 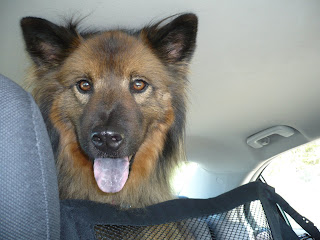 The red rocks were an exciting transition. We later saw some signs for Amethyst Mines. I assume Amethysts like red rocks.


Nothing of Note in Thunder Bay
We satiated our hunger. That is all.
Loosed Moose and Time Warp
North of Thunder Bay we saw a large something on the shoulder of the road. It wasn't sleeping. Poor female moose had been loosed.
Shortly after the Loosed Moose we crossed the Time Zone and magically we had gained an extra hour of sleep tonight (that I am wasting by finishing this blog).
Mind Numbing Boredom leads to Pit Stop
We started out the day so excited and got to see so many exciting things. Let me tell you, there are only so many times you can demand a Moose on the Loose in vain while staring at rows upon rows and rows (did I mention rows) of the same type of tree. Our rocks were gone. I never thought I'd miss the rocks. Water was sparse. Just trees, tress and more trees, all coniferous.  We had to make a pit stop. We were going crazy.
Surprisingly the Pit Stop had a simple beauty. 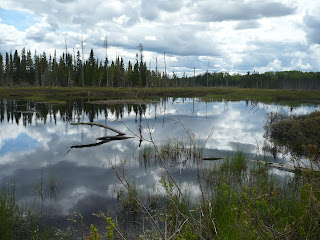 No beavers, though I'm not holding my breath to see one of those. Car commercials lie. Beavers do not show up on the road often so you have a chance to use your brakes, tires, or whatever else they are advertising. Trust me. I know. 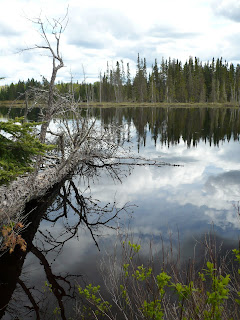 Our rocks returned shortly after this stop. I never thought I'd miss rocks so much.
Shelley the Goal Saviour
Just as it was Shelley's determination to get us down to the water so I could touch Lake Superior, it was Shelley who spotted the moose first.
There she was, on the left side of the road. She was large, she was drinking, and most importantly she was Loose.
(I think Shelley found her so I'd shut up about Loose Moose.)
Posted by Colleen Speed at 8:31 PM