View Day 3 - Kenora, ON to Moosejaw, SK in a larger map

Breakfast for Gypsies
We got a continental breakfast this morning. I made off like a bandit. Stuffing three apples, two muffins, and two yogurts into mine and Shelley's pockets. Snacks for later. We had to pay a $10 pet fee so I was getting our money's worth.


I hid the food on the way out of the hotel one of Dante's bandanas as a hobo pouch.
Here's the loot! 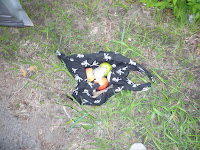 Manitoba
Manitoba is really close to Kenora. After leaving later this morning at 8:30AM due to gather materials for our "Prairie Entertainment Project", we ended up leaving the Manitoba visitor's center at 9:19AM. 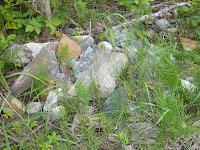 It already felt like more progress than yesterday.  After spending two days driving through Ontario, it was hard to wrap our minds around driving through Manitoba and ending up in Saskachewan tonight. 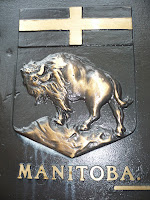 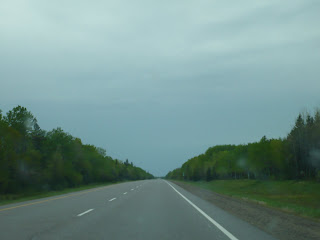 Shortly after starting on the four lane Transcanada Highway, it started to rain. It seemed fitting as we had already imagined having to portage the car through Manitoba due to the flooding reports west of Winnipeg. It made for an interesting image of Shelley and I attempting to move the car over water with Dante sitting on top like an Emperor on tour to visit his people.


"Pip, Pip, onward servents, and bring my my monocle." 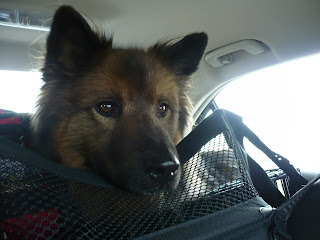 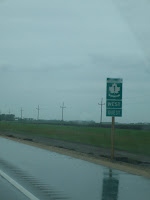 Needless to say, Dante is NOT a water dog.
I do have some complaints about how the Transcanada is designed in Manitoba. There are stop lights, railway crossings, no on ramps - no you just turn onto the 100km/hr highway like any old intersection, no acceleration lane. Need to go the other direction? No problem, just cross two lanes of speeding traffic and make your left hand turn. Have the civil engineering of Manitoba never heard of an OVERPASS!?! Seriously people!
Floods!
We were told at the visitor's centre that the Transcanada and Yellowhead highways were never flooded but we did get a chance to see some of the rivers swelling well beyond their banks. 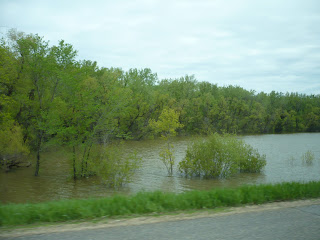 This is the Assinaboine River by the Winnipeg by-pass 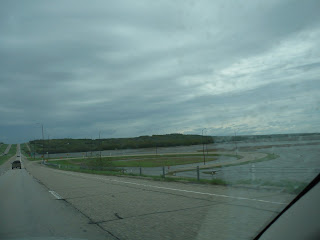 Assiniaboine River in Brandon, MB
There was a big field of piled wet hay. Not too sure what that was about but it was all definitely ruined whether intentially or unintentionally. 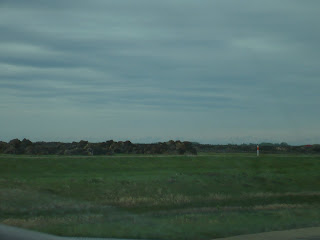 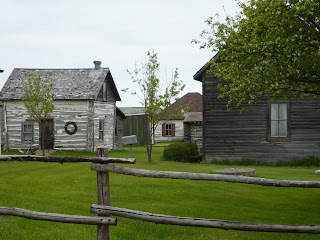 I made Shelley laugh really hard when I "aquired" some hay for our "PEP." We fled the scene before the awkward questions could start from the employees. 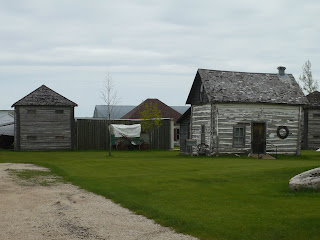 Saskatchewan - it will take your breath away. Literally!
The welcome centre over the Saskatchewan boarder looked a little shabby as it was receiving a new roof. I don't know how the roofer's didn't blow off. The flags in the photo really wanted to escape in the wind. 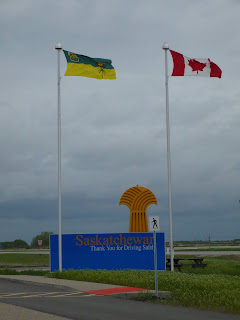 Prairie Entertainment Project (or PEP) - Part 1
I spent almost the whole time being disappointed in the prairies. I expected flat, large fields, with little to no trees. It was actually kind of hilly. The topography seemed similar to Huron County, in Southern Ontario, except the fields were larger, everyone had an antique tractor or farm equipment abandoned at the side of their field, and the trees were skinny, flimsy and shorter -probably to bend with the wind.
Fortunately Shelley and I had prepared for boredom that everyone who has driven the prairies warns about. It took awhile to find a suitable place to set it up. You see, we didn't want any car, or farmer's equipement to hit it unexpectedly. 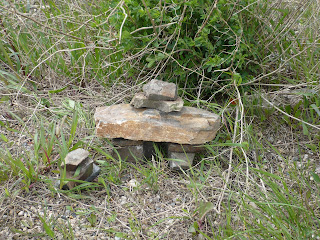 Anyone who's driven in any place in Ontario where the rocks are cut out for the road to pass through has probably seen lots of little inukshuks litering the landscape in recent years. Well the past two days we saw a lot of them. I wanted to make one but it seemed less special somehow when you could find one on almost any rock formation on the side of the road.

I decided I would make my inukshuk in the prairies and Shelley concurred (actually she laughed really hard as I came up with this idea in between demanding Loose Moose, and we were already loosing our minds). Shelley found the rocks in Kenora, during Dante's morning constitution, and we finally found a place to set it up by the flat road of Saskatchewan (110km/hr speed limit) without it being a hazard to motorists and farmers. 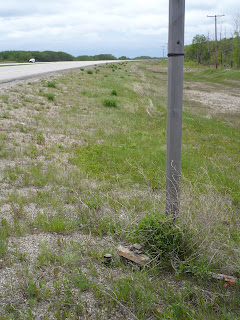 Maybe we will start a new trend.
No Animal Sightings with Life
You can check the map for the locations but today I was disappointed to realize I had been woefully misled by Doug and did not see one live prairie dog ("that's too easy of an animal, they are everywhere"). I saw lots of dead ones - so many I didn't record them all. Also a dead coyote, and a dead Elk. That's right Doug - an Elk! You told me it was too soon for Elk - you lie!
I Can See for Miles, and Miles
After thinking my idea of a proper prairie landscape was fictional, we finally entered a new area, west of Regina! 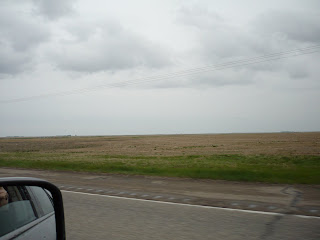 And Land by the C.P. Line (Canadian Pacific Railway) 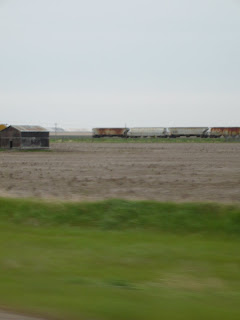 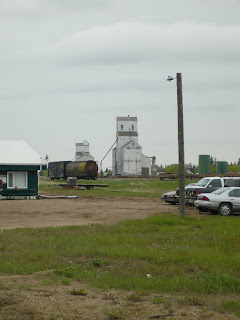 On the whole, the summary of the today has a lot less impressive images than the past two days, but surprisingly, due to our PEP scheming, I never experienced the mind numbing, brain-leaking-out-of-your-ears, boredom that I experienced for part of yesterday. 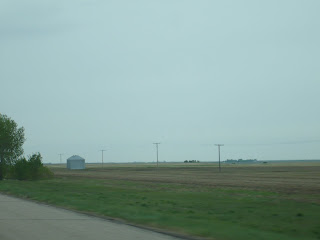 A huge plus was Dante finally figured out that after two days of intermittent whining or barking, we weren't going to the dog park. He slept on, and chewed his giant rawhide and watched quietly out the window. He is still very tired. We gained another hour we were not aware of until we got the hotel. I'm finishing the blog at 10PM tonight for once instead of 11PM. 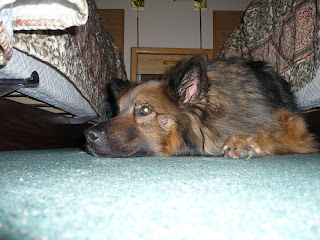 Prairie Entertainment Project aka PEP - Part 2
Oh and you may have noticed that the Inukshuk was Part 1 of the "PEP", Part 2 will have to wait until we are done the trip and Shelley has the time to edit the videos. I'll give you two hints. There are prairies in Saskatecwan, and look at the first photo of this post.
Posted by Colleen Speed at 9:11 PM