via Banff and Jasper National Parks.

A great day for wildlife sightings. Two black bears, ground squirrels, deer, mountain goats (I didn't even know Canada had those!), and multiple elk.  I actually managed to get a photo of one of the elk, and the ground squirrl. I tell you, the animals in the park are so use to people gauking at them, they barely move away as you approach them with a camera. 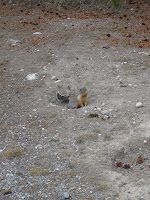 We saw two huge groups of people at two different points on the side of the road taking photos of the black bears. We didn't realize what they were gathered for until we had already passed so no photos of black bears. 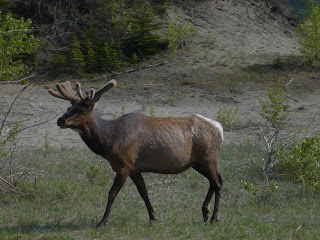 Dante really wanted to get this Elk.
The Mountains - Are Very Pointy
You can see the Rocky Mountain range from Calgary. Yet it still takes an hour or so to drive there. And even when you get there, you still aren't very close to a lot of the mountains. 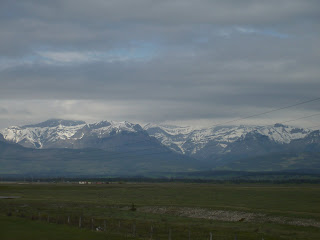 Note this is not the view you get from Calgary, in the city you can just make the shapes of the mountains out on the horizon. This photo was taken on Hwy 1 towards Banff National Park.

Lac Des Arcs
This is the first place when you are heading towards the Banff National Park that it's worth pulling over to take a photo of the mountains. 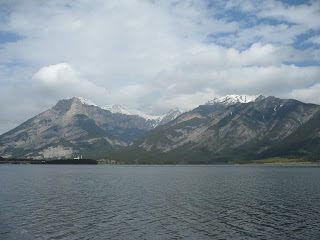 You can get an idea of the scale if you notice the tiny little white processing plant on left side at the base of the mountain. 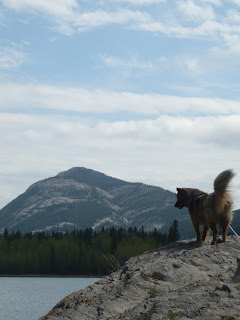 Dante enjoyed being a mountain dog and drank some of the cold mountain lake water.
For those of you keeping track, no he did not find a monocle.
The Three Sister's in Canmore
Shortly before you enter Banff National Park is the tourist town of Canmore.  From Canmore you can get a fantastic view of a popular mountain called The Three Sisters. 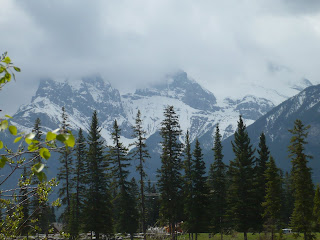 It may be difficult to see as the clouds were low when we started out in the morning but there are three very similar styled mountain peaks side by side.
A Matter of Scale
The Rockies are big. You think you are approaching a mountain and then you realize you are no where even close to it's base. 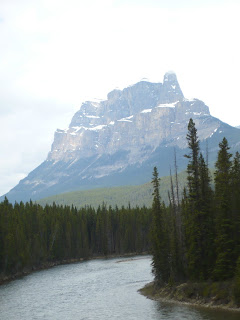 I tried hard to capture the majesty of being surrounded by mountains, but it's really something that has to be experienced and can't really be captured through the photos. 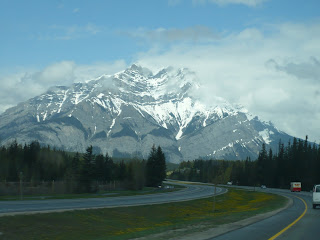 The cars in this photo give you a bit of an idea of the scale and we aren't even that close to this mountain yet.
Crowfeet Glacier
We drove up to this Glacier's look out point and couldn't stop laughing because there in the pouring rain is a miserable crow at Crowfeet Glacier. 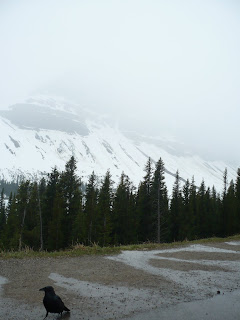 Like the other animals in the park, it seemed unconcerned with my presence and managed to pose nicely so I could include it in the glacier photo of it's namesake. 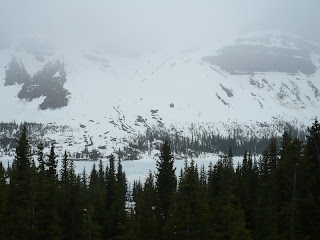 Crowfeet Glacier is 50m thick at the edge. Once again, a matter of scale.
And the higher up we went, the more white stuff we found 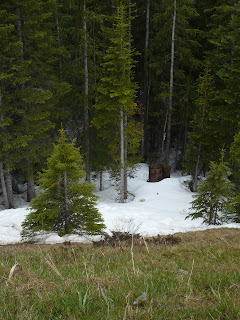 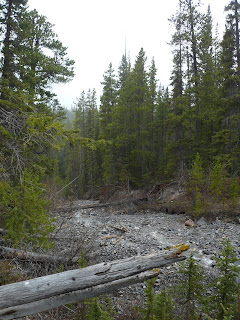 Then you would lift your view above the road, and there loomed a mountain. 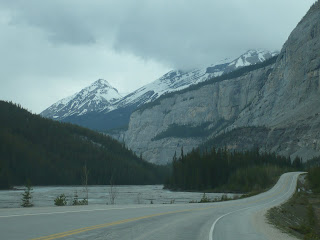 And you would be reminded of the scale of the landscape 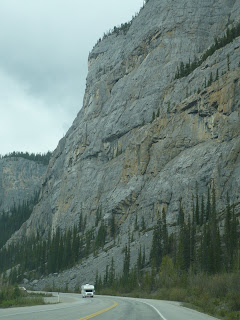 And you try hard to convince yourself that you are actually here and experiencing this. 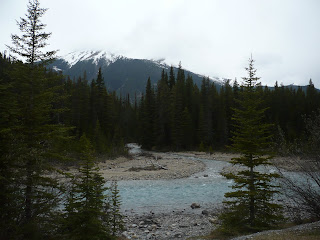 And when you think that it can't possibly get any better,
you climb higher 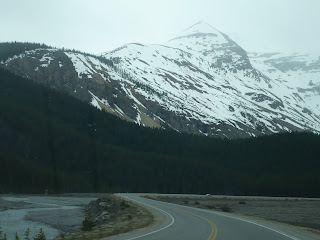 This road does almost a 360 degree turn to get you onto a path that climbs a mountain.
The View From Up Here
This is probably the most breath taking spot we stopped at (save the ice fields that were so high I was actually a little short on breath on the climb). 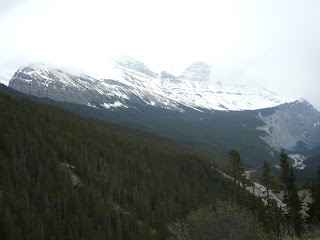 To understand the scale, see if you can spot the bus on the road below us. 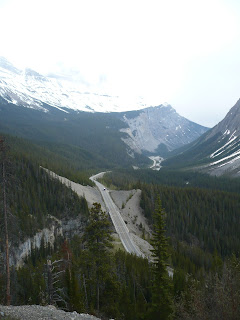 This is MY mountain. 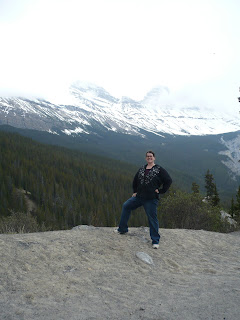 We did have some jocularity on this leg of our journey. 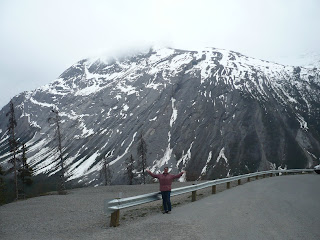 But overall I can't use enough adjectives to describe the experience. 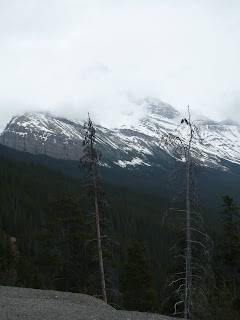 The Tip of the Iceburg - Athabasca Glacier in the Columbia Ice Fields
We continued to climb higher and higher up the mountain in the car (and saw some crazy cyclists) until we finally stumbled upon the Athabasca Glacier. 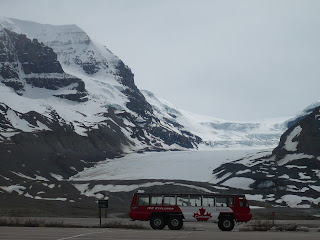 We wanted to get closer so we found the path that led to the top. 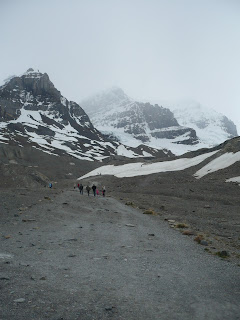 Unfortunately we were unprepared for a hike through a section of snow on an incline (we were wearing running shoes and hoodies). Shelley remained behind but I continued forward undeterred by my sore knee (probably foolishly).
I was determined to see the glacier closer. 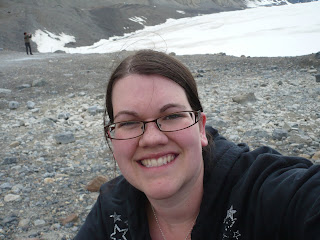 At 6,500ft (2000m) it was harder to breath but not too bad. I still wonder if it was all in my head because I swear I was fine until I read the sign and started climbing.
This glacier is only a hint of the huge ice fields hidden from view. 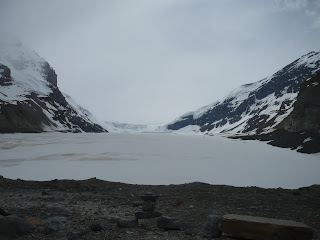 If you look closely in this photo you can see an inukshuk in the bottom middle.
The ice in glaciers always flow forwards, as ice accumulating at the top flows down toward the toe. However, during warmer periods, the rate of melting at the toe may exceed the rate of accumulation at the source causing a glacier to retreat. 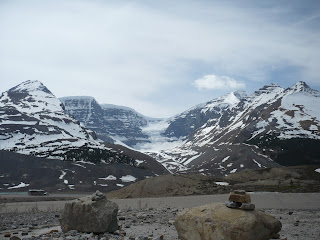 Butt Eating Beavers?
When my sisters and I were younger, we did a lot of travelling from Southern Ontario to visit family in Northern Ontario. If we had to go to the washroom a long the way, the only option was an out house. If you've ever used an outhouse, you know that the size of the hole in the ground is pretty big (admit it, you've looked in before). Big enough to fit a bear one would say.
My sisters and I use to go to the bathroom as fast as we could because we swear there was a bear in there just waiting to bite my bum.
So when I saw this today, I couldn't help but take a photo.
Caution, Butt Eating Beaver. 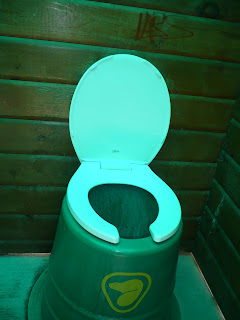 Incidentally, Shelley wondered why I was taking so long in the bathroom. Really it's because I was giggling so much at the though and taking a photo (the first one turned out blurry so I had to delete it and try again)
Sunwapta Falls
Unsurprisingly these falls are located in the Sunwapta River 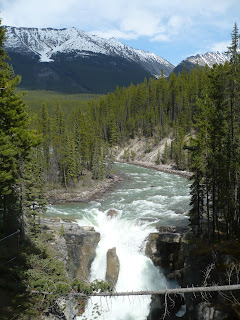 And I'm happy to be here. 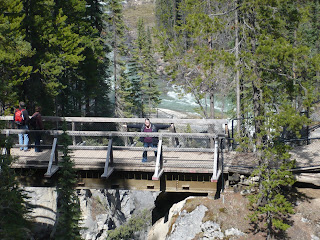 I'm now officially further north than I've ever been in my life (technically that was Drumheller yesterday too, but now I'm even further north). 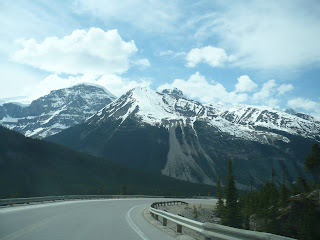 Tomorrow I'm going to be entering British Columbia for the first time in my life. We will go through some more mountains but I don't think they will be as stunning as the ones we saw today.
Posted by Colleen Speed at 10:58 PM