We arrived safely at Shelley's new house in Prince George B.C. on June 2 early afternoon. I've been unable to update anything as the internet at Shelley's house is due to be set up tomorrow, and I leave on the bus to Edmonton tonight. Our only contact with the outside world has been Shelley's new smart phone, and the radio. Currently I'm attempting to do a quick update for everyone while squatting on Starbucks' wi-fi (I did buy a chocolate-coconut frappichino which is fantastically delicious by the way).

Edit: The wi-fi at Starbucks was too slow to update the photos and the map, so I'm finishing this post from Edmonton, AB at my friend's place.

On With The Show

We had a lot of animal sightings on our final day of our cross country adventure. I actually managed to get this epic photo of a black bear chowing down on the dandelions. 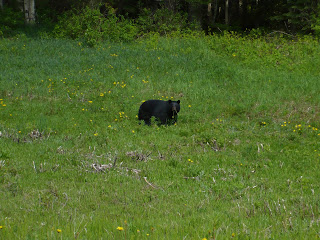 Capturing this photo was quite amusing, we saw it off to the right side of the road and pulled over (the highway between Jasper and Prince George is rather devoid of traffic), I rolled down my window and as I turned the camera on, the bear paused to sniff the air. It quickly deduced we were humans gawking from a car and turned back to it's delicious meal of dandelions. Now that wasn't the photo I wanted, I wanted the bear to look at me, so Shelley and I started calling "Mr. Bear" and making kissy noises like you would to get the attention of a dog or a cat. 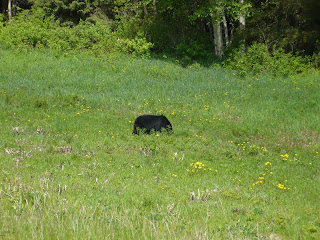 It didn't work. He went right on munching. Dante, who at first assumed the bear was a large dog was whining, once he stopped to sniff the situation out and realized it wasn't something he'd ever smelled before, he started to bark - loud.

That worked. The bear looked over at us with a look (captured in the photo) like "you seriously aren't going to let that thing out are you? Because yea, I'll mess it up, I'm eating here."

Let's Do The Time Warp Again
Shortly after crossing the boarder to British Columbia, we gained another hour to our day. 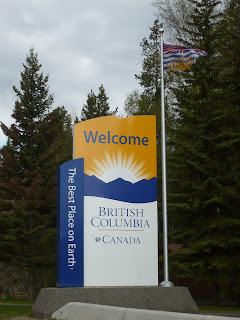 I would hate to do this trip in reverse where you lose an hour to your day.

Mount Robson is the highest point in the Canadian Rockies as 3954m. Obviously it's still pretty far away in this photo. 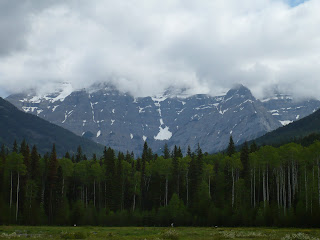 This started the debate about Mount Logan in the Yukon, which is the tallest mountain in Canada. That would lead us to believe that Mount Logan is not in fact a mountain in the Canadian Rockies' mountain range.  It's true, it's not. I just never really put a lot of thought into it before.

The Scourge of British Columbia

While driving through British Columbia, Shelley and I noticed a lot of brown/burn looking dead trees. These are trees that have been attacked by the pine beetle. Pine beetles attack older trees of approximately 80 years of age. The beetles have become more widespread since 2005 because the winters here have been unseasonably warm and the beetles haven't been dieing off in the cold. 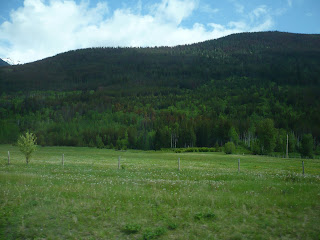 It was sad to watch the landscape pass buy and notice all the infested trees, and trees showing early signs of infestation. 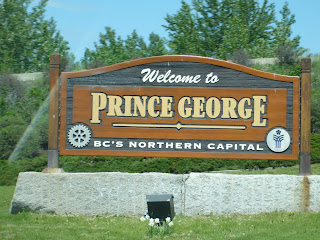 After spending a few days in Prince George B.C. I can understand why Canadians have a reputation of being polite. People were so polite it was creepy. People actually apologised in COSTCO for cutting you off with their cart - a shock to me who once witnessed cart rage at COSTCO in Ottawa, ON that would have lead to a fist fight had security not arrived.

This, my friends, is officially the most northern point on the planet I have ever been.
Posted by Colleen Speed at 9:30 AM