Thems Some Big Waves
On Saturday we planned to take Claire to the Twin Lakes Beach in Santa Cruz. One thing we have learned here is you don't plan an alternate beach day due to rain. One aspect of beach going we did not anticipate however was wind. 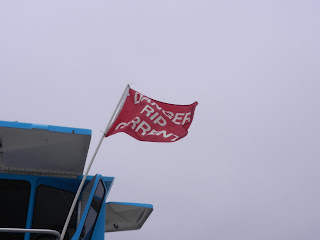 We arrived early at the beach, and were terribly excited about the size of waves we were seeing. Steve and I have been boogie boarding enough now that we were up for the challenge, however we lamented that these waves were not conductive to instructing a new person how to ride a wave on a boogie board. 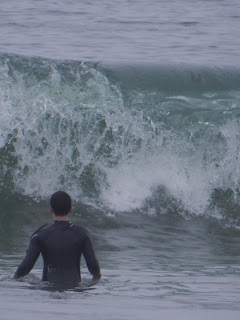 Not to be deterred (or perhaps naively ignorant of the power of such waves) we stuffed ourselves into our wetsuits and Claire was very eager to learn to ride her first wave. 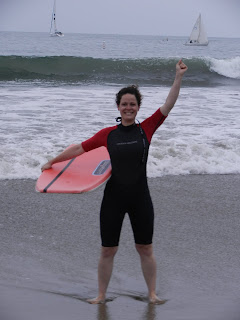 She boldly charged straight into the water, eager to receive her instruction.
"Like Flying Through the Air"
We quickly encountered a problem. How does one catch a wave before it crests when you can't reach the point in the water before the wave crests without being beaten down by the wave before? 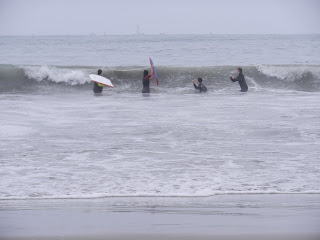 After a couple of failed attempts to get through the large waves, Colleen decided to try an experiment. She discovered that since the waves were so large, it was possible to ride the wave after it crested and crashed back down. 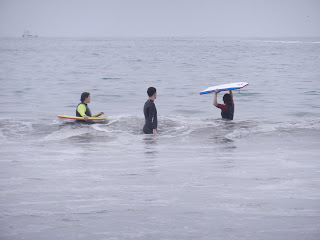 After some instruction of how to hold and get on top of the board, Claire was ready to ride.
And ride she did - like a Boss.
(Colleen didn't time this wave right and you will notice she doesn't make it that far) 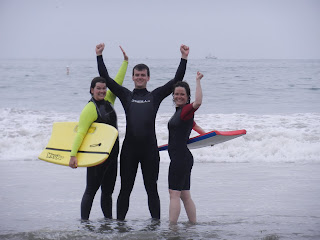 A successful venture.
Face-Plant on Ocean Floor
The more experienced Cameron's had mentioned vague reasons why it wasn't smart to attempt to boogie board on the crest of these waves. Colleen obviously didn't take them seriously and decided since she had boogie boarded twice before, it was worth a shot.
She caught the 12 foot wave as it was beginning to crest and for a brief moment in time was insanely proud as she rode at the tip of the wave as it curled beneath her. As the wave continued to roll forward Colleen learned first hand why you do not boogie board (nor surf) on large waved close to shore. 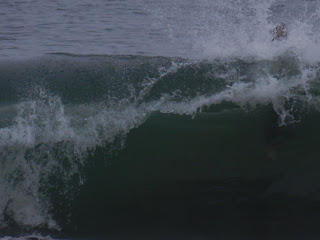 As the wave curled and gained height, her board pointed straight down and she plunged 90 degrees straight into the waver - in front of the wave. She forced her body to go limp, (the proper defense of being rolled in a large wave) as she was rolled head over heels, a mixture of salt water and sand filling her nose. As she finished her second rotation her chin slammed straight into the sandy ocean floor. Pushing upwards with her hands she surfaced, skinned chin but conscious and feeling mighty stupid for the attempt. 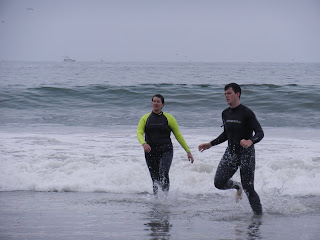 This is not the first time Colleen has attempted such things beyond her skill level *cough* skiing in the winter resulting in head injury *cough*, you'd think she's learn.
Boys and Their Large Toys
After attempting to play in the large waves with Steve and Gord without a board, Colleen decided she was tired of having sand shoved in her ears and being rolled by the waves and left the water to get some photos. 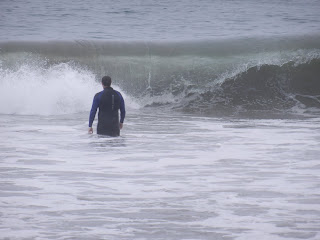 These waves were massive, 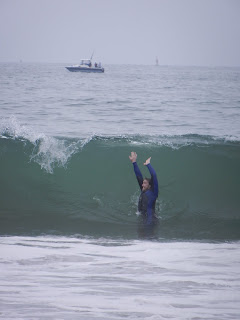 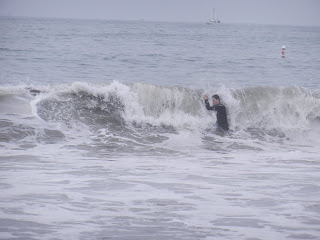 and full of sand 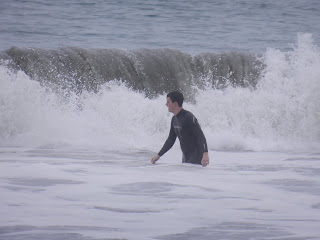 Yet somehow Steve and Gord managed to successfully body surf a few. 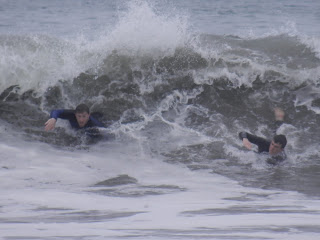 It was fun day regardless of the lack of warm sun - the large waves were an experience in themselves. 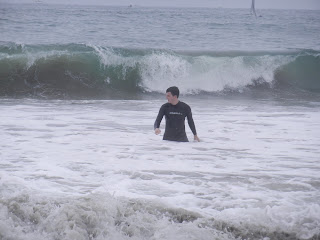 By the time we left for delicious food at the Cameron's parent's place, the waves were getting larger and the red "Danger Rip Current" flag was displayed on the life guard hut.
Posted by Colleen Speed at 11:53 PM