We have rented a car for the weekend so we can get to the launch point of our whale watching tour tomorrow.  We took advantage of having the car a day earlier to get some groceries. We heard some weird bird noises coming from the trees as we were leaving the parking lot and look what we found in the trees. 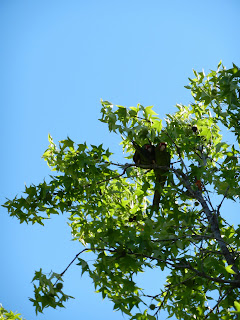 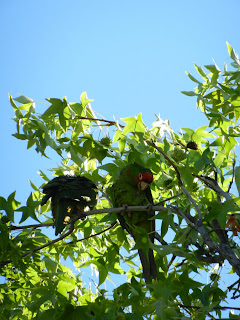 Obviously these tropical birds (who Colleen believes are red faced parakeets due to a google image search) are not native to the area. We had been told about seeing tropical birds here periodically but had never seen them until today. When people's pet birds escape (or are let go) they don't die off during the winter. This place is insanity!

For this evening we didn't want to just let the car sit in our parking spot while we stayed at the apartment (even if the hot tub was oh so ever tempting as always) Steve came up with the last minute plan of  "Let's look on Google Maps for an exciting road that goes up into the hills and looks really zig-zaggy, since that means it's switchbacking up a steep incline".

The plan to climb Mount Hamilton was born.

Silicon Valley is Indeed a Valley
Anywhere in "the valley" you go, you can always see a mountain range on the east and on the west. 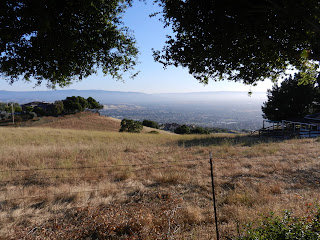 As we started to get to the edge of San Jose, any straight line in the road showed it was starting to go up, and the hills became something we were going to drive into in minutes, not hours. 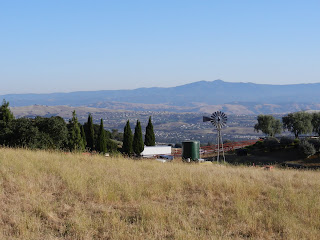 There were definitely some extremely rich people who live in some huge houses along the way. We're sure the land is worth a lot due to the view of the valley.

Not for the Faint of Heart with Heights 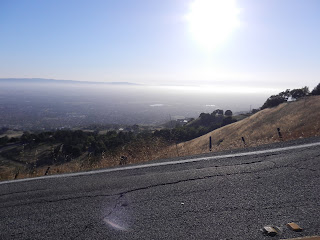 The built up area ended quickly as we started to climb. The road wound it's way up and up, with sharp drop-offs beside the asphalt, usually with no guard rail. If you enlarge this photo look for the top of the second telephone pole. They are spaced as usual. This highlights the extremely vertical drop off by the road (which is still early on in the climb up so we still have a guard rail at this point.) 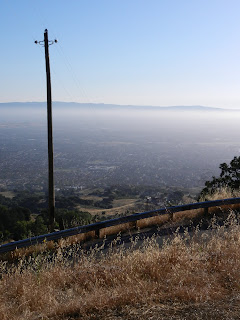 It was exciting, to navigate blind corner after sharp switch back after steep climb, and every couple of minutes there would be an amazing view that was even better than the one before. The roads in this photo is the same road we are standing on, just lots of sharp turns a long the way causes it to snake like this up the mountain. 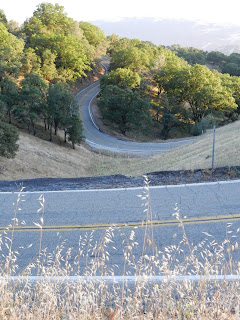 We had some surprise wild life sightings a long the way. This is a female black tail deer and her two fawns following her through a field. 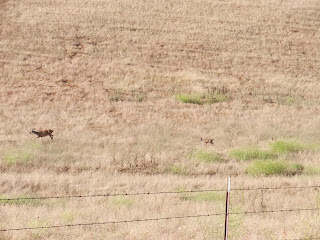 Colleen got a chance to use the epic zoom (by shimmying herself out the passenger window to lean over the hood of the car as to not spook them) on our new camera. 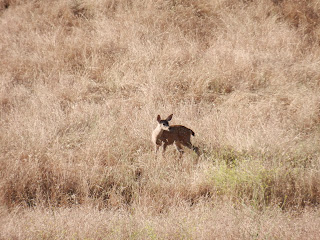 The observatory is still far away. Interestingly you can see the observatory from highway 101 in San Jose but it still takes 90 minutes (2 hours with stops to enjoy the view) to finally make it up to the top. 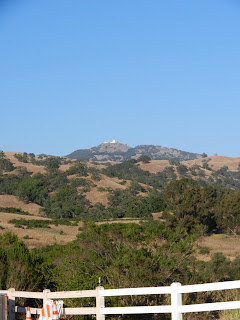 We quickly learned that the camera can't capture the awe that the views caused (or the thrill of driving next to a steep drop off with no guard rail), but we still tried. 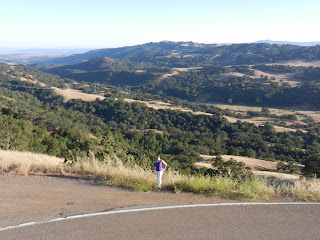 At one point we pulled over on a small stopping area. In an effort to show scale, Steve crossed the road and climbed a hill about 1 or 1 1/2 stories above the road, so he could get a shot of Colleen with the valley below her. Even then, the scale behind her couldn't be captured unless Steve kept the camera zoomed out, which meant Colleen was barely visible standing on the side of the road.

The Observatory and Mount Hamilton
At 4,196 ft (1,279m) Mount Hamilton is the tallest mountain in California's Diablo's Mountain Range.  Our ears popped once on the drive up. 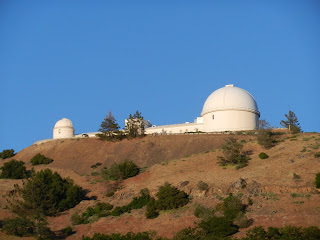 We found more black tailed deer when we reached the top. This one was super close to the car. 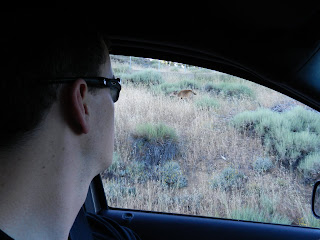 We were close enough to her to see her fur moving in the breeze. 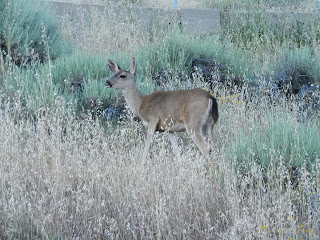 Welcome to the observatory. Someday we will go up first thing in the morning so we can get the sun to our backs which interfered with a lot of our landscape photos as we were facing west over looking the valley in the evening. 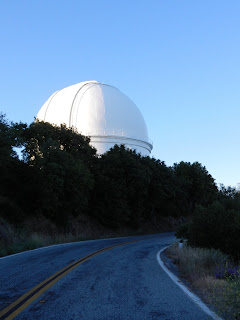 There were times at top where you could see valleys out both car windows at the same time, it was epic to be at the peak of this mountain.

Oddities Along the Route

Colleen adores this stump. It looks like something out of a fantasy novel or movie that should come to life and walk or strangle someone. 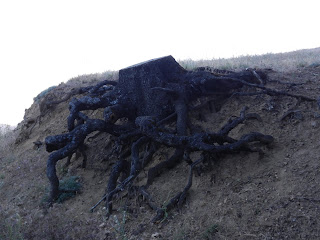 Giant pine cones! We don't know exactly what kind of trees these fall out of yet but they appear to look really similar to the white pines you would find in Ontario. But for some reason their pine cones are on steroids! 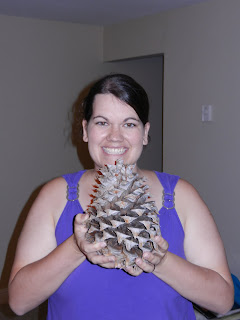 We also saw wild turkeys, male deer with large antlers, ground birds that were either partridges or quails, and the California equivalents of the blue jay and yellow finches.  Next time we do this drive, it will be in the morning and I think we will pack a picnic.

We highly recommend this scenic drive to anyone who comes to stay at our Motel California as long as you don't suffer motion sickness and can handle driving by really sharp drops with no guard rails (even if you do we are still game if you are!). What a fantastic evening adventure!
Posted by Colleen Speed at 11:56 PM