Welcome to the Motel California

This post has been long in coming. Firstly it was delayed because I borrowed a camera and kept forgetting to get the photos from Gord when he was not at work, and secondly because there is so many other exciting things to do!!

Building and Plant Shock (not really culture shock)
The next 4 months or so for Steve, this is home. For me, this is home until I come back to Canada the beginning of August. 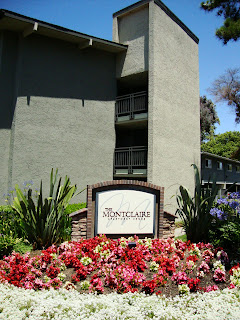 There are quite a few little oddities to get use to when living in California. Prepare for caplocks throughout this post because sometimes my mind is just blown. In the previous photo notice the stairwell behind the sign?
Notice anything odd? 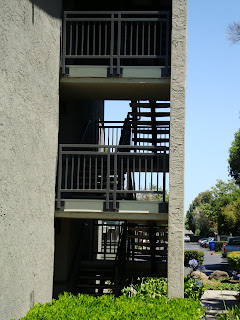 It's OPEN TO THE ELEMENTS!
After being here for a month it still blows my mind that you do not need to concern yourself about winterizing things. It's rained twice in the month that I've been here, and even that wasn't anywhere nearly as impressive as the downpours we had in Ontario all April and May.  Here you will be walking along a hallway between apartments and BAM - outside! 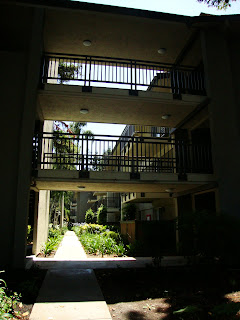 This is a hallway on the second and third floors between some apartments. Insanity I say!
Another thing that takes some getting use to is walking down the street to a store and... 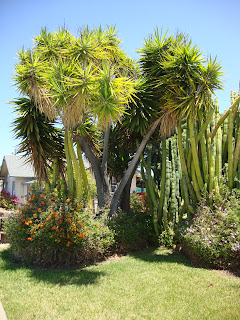 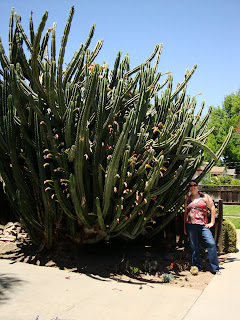 And they certainly aren't the size of the ones we in Ontario buy in pots at the grocery store. We pass this one on our way to the market on Murphy street on Saturdays and it gets pretty flowers! 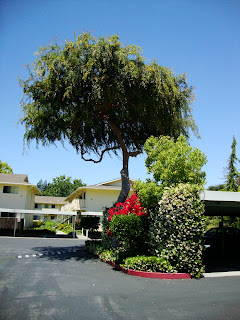 This is a parking lot at an apartment building. Everything here is so pretty, but none of it holds a candle to the excitement of... 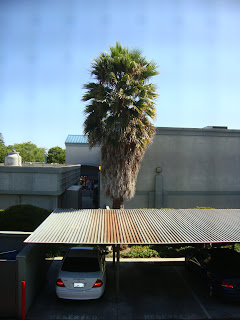 Welcome to the Motel California 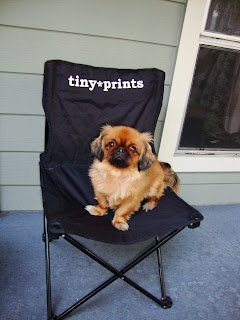 We are still mostly living out of boxes - or not opening boxes we don't immediately need because Steve signed a 6 month lease when he arrived from Canada with no place to live,  $4000 in his pocket, and only a couch to crash on.

Yes that's a giant TV box covered with a sheet acting as a shelf. 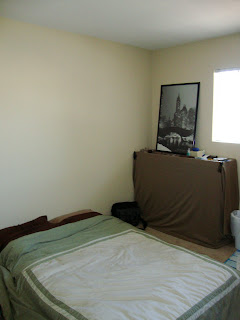 .
Regardless, where ever we live in California will be called Motel California - our friends and family now have a free place to stay to explore the west coast. 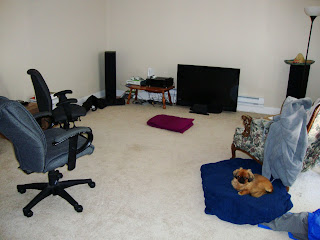 We moved Steve and Gord's stuff in the smallest U-Haul truck you could get. Gord drove (with Lex and Ruby) with the few belongings worth packing up to make a cross continent trip.Hence the lack of seating and well - stuff. 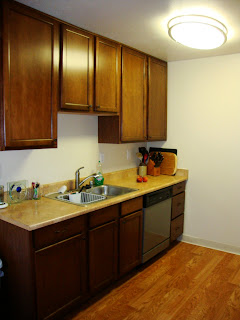 Our kitchen is actually kind of snazzy. 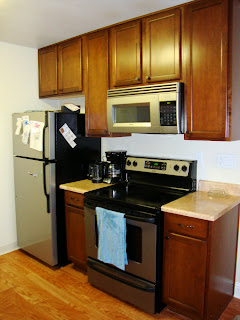 The cupboards are really tall though so we don't keep much on the top shelf. 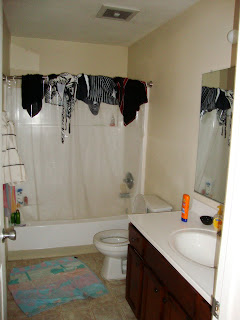 This is how the bathroom typically looks. Sunscreen on the counter for daily use, and bathing suits drying on the shower rod from the night time trips to the hot tub.
Living here feels a lot like living in a resort 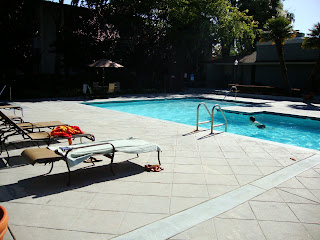 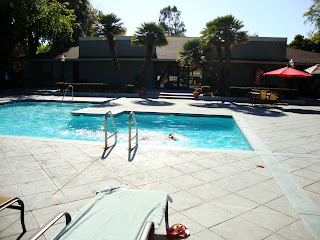 I assume at some point palm trees will stop exciting me. If it makes you feel any better they aren't native to this area but have all been introduced. But still - PALM TREES! 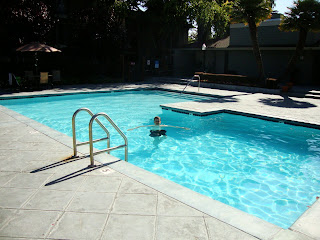 It's odd that every night we are the only ones in the hot tub until it closes.  I wonder when I'll start taking it for granted like everyone else who lives here. 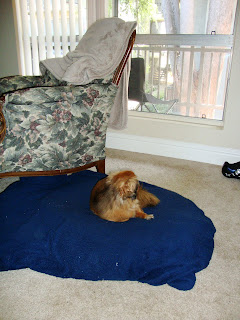 Ruby also enjoys her life of leisure, sleeping on her make shift bed of an old duvet and cover, she stares longingly out the window awaiting the next squirrel to dare set foot in her tree (or for her favourite person Gord to come home from work) 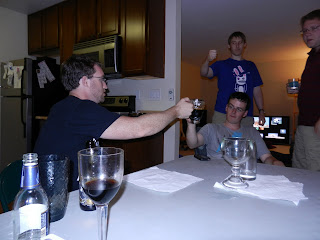 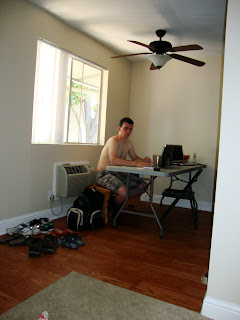 And this is how it looked after Gord's parents left. 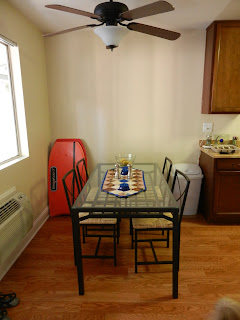 Pretty fancy. It's like we are growing up...or something 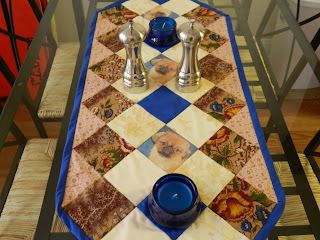 I don't want to ruin the surprise. So when this is posted online, assume Gord has seen it - though I'd probably be safe because he doesn't read the blog unless I force him to read something I wrote about him, but I will error on the side of caution. Ruby has likes this new table a lot. I rarely saw her go over to the other one, even when we dropped food. 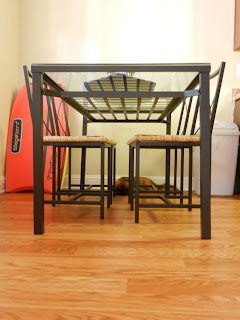 SCIENCE!
The addition of a real table means that Steve and Gord can set up their work station for their electronic experiments. 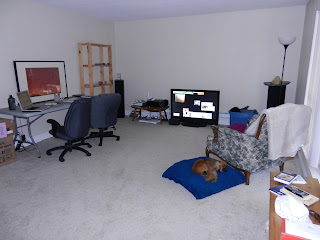 Or whatever mad plans they are hatching. 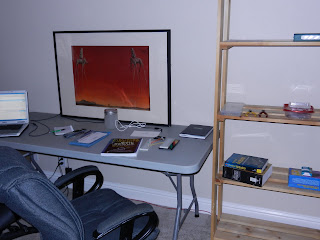 I wonder if I should be worried... 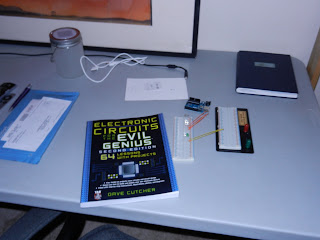 Maybe it's not the table Ruby likes, but figures she might as well practice her duck and cover for emergencies. 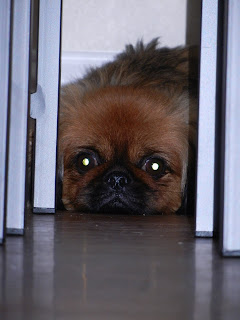 'Relax,' said the night man,
'We are programmed to receive.
You can check-out any time you like,
But you can never leave!'
Posted by Colleen Speed at 8:18 PM