Monterey Bay, California has a unique deep water canyon that allows for a very wide array of marine life to be viewed within the bay itself.  The Submarine Canyon is located in the middle of Monterey Bay and it reaches depths of 11,800 ft (3,600m) from sea level. 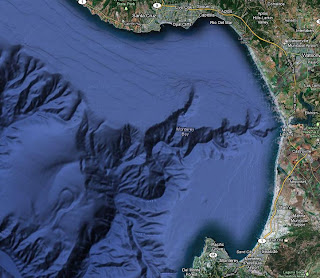 It is this Canyon that attracted us to choosing a whale watching tour that tours this area. Our boat left from Monterey, located on the map at the bottom of the bay.

The Tour that Almost Didn't
When we booked our tour we had a choice between 10am or 1:30pm launch times. We asked if there were viewing differences with the marine life and the times and were told that the only difference is in the afternoon the wind is stronger and the waves are more choppy.  As we wanted as much time as possible to drive to Monterey and find our launch point we chose the 1:30pm tour with Chris' Whale Watching Tours. This tour was chosen over others because their boats are more fishing trawlers, something we felt would add to the overall experience. 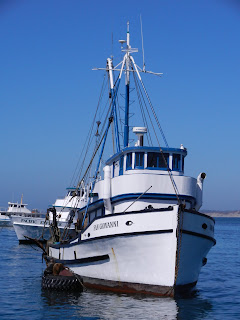 Note, this is not a boat owned by Chris' Whale Tours but this is similar (check out the California Sea Lions on the left bottom by the boat)
Unfortunately when we arrived at quarter to one, we were told that the waves were too large and the water too choppy and they were not going to run the afternoon tour. They said some of the other whale watching tours with larger boats were still running, and while we were disappointed to not be going on a fishing trawler, we were determined to see whales.

While Colleen was insanely excited about the prospects of whale viewing today, Steve and Gord spent the trip out discussing various boating mechanics and simply commenting how excited they were to simply be out on a boat in the water. 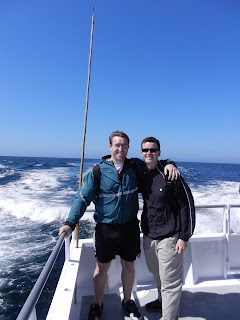 A few renditions of this song were sung periodically throughout the trip.
There She Blows
As it turns out, Chris' Tours was very correct. The waves were VERY large and choppy. I (Colleen) made it until after our third viewing of the whale, 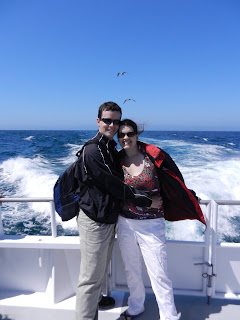 then I had to go to the stern and vomit. I'm certain some marine life will enjoy my regurgitated squid and crab I ate before the tour.  It was still totally worth it, nausea and all. (Next time I'm bringing gravol and going for a morning tour)

The reason we wanted to go whale watching this weekend (despite it being the Independence Day weekend therefore lots of people) is that Blue Whales migrate by the coast of California during mid-June to July. 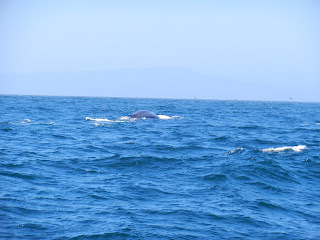 Blue Whales feed on krill. During the day Krill live between 300-400 ft of water (for perspective the first level of diving a person can do certifies you to 60ft, the second level to 100 ft and you require a special certification and a special mix of oxygen and nitrogen to dive to 300 ft). For this reason Blue Whales are not typically a whale you see close to shore. Due to Monterey's deep water canyon, we had a chance to view a Blue Whale about 45 minutes boat ride from our launch at Fisherman's Wharf. 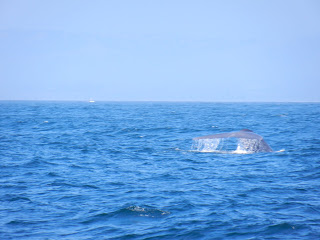 The tour we took had the unique chance of finding a lone male during their 10AM tour that would show it's fluke (a term we learned that mean it will stick it's tail out of the water before it dives. We learned that Blue Whales do not normally do this so the boat's crew was anxious to find the same whale again. A Blue Whale can dive for 13-15 minutes before needing to surface for a breath. During that time underwater it can cover a lot of ground as they can travel at a maximum of 30 miles per hour. 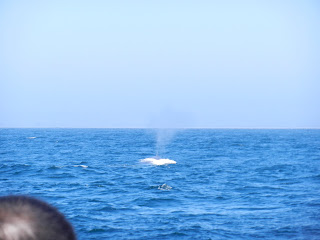 When our boat arrived close to the area they had last seen the whale, everyone on deck was told to look for the 3-story tall whale blow (the spray you see when a whale opens it's blow hole and explosively exhales it's breath). The blow hole of a whale is it's nostrils. If you get it on your face, that's not just water - that's water AND whale snot!


The Largest Mammal on Earth

Viewing a Blue Whale is certainly not as exciting (as we imagine since we have no comparison)  as viewing Humpback Whales or Orcas (who breach the water, jump around, and come really close to your boat) but it is an astonishing experience in itself when you realize what exactly it is you are seeing. 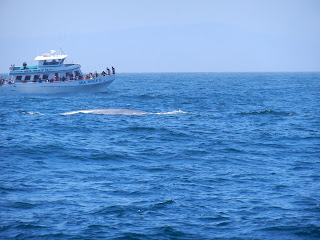 At a recorded average of 100ft long and 3 stories tall (the size of 30 elephants!), Blue Whales are the largest mammal on Earth. Their eye is the size of a basketball, their heart is the size of a Volkswagen Beetle, and a child could pass through the arteries that lead to their hearts. Take the photo of the whale below for example which was estimated to be around 85 ft long: 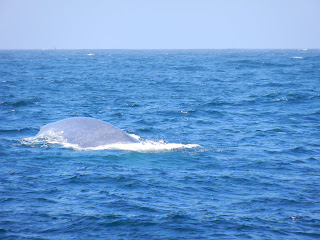 Note the tiny dorsal fin on the left end of the part of the whale you see in the photo here. Now look at this image of a blue whale and look where that is located.

That's A LOT of whale under that water!
Interestingly enough, the markings you see in the previous photo before the drawn image is the section of the Blue Whale scientists use to identify Blue Whales in a global database. Like the markings of a Humpback Whale on the bottom of it's tale, these markings on the side of the Blue Whale function as unique to each whale as finger prints are in humans. 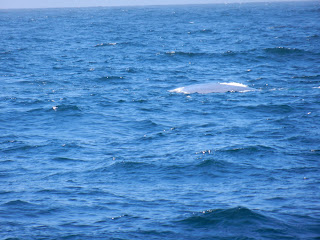 Gord compared watching the Blue Whale dive after a breath being like watching a serpant. It is an appropriate analogy. That's a lot of whale to see pass from blow hole to tail. 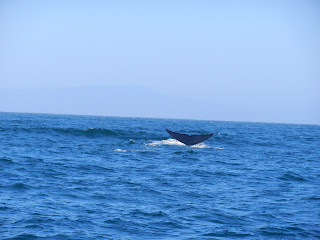 We got a chance to see this Blue Whale fluke it's tail twice. An amazing encounter.
After Whale Snack
After our epic Blue Whale encounter, we were walking the Fisherman's Wharf back towards our rental car when we smelled a scent so sweet we had to investigate. 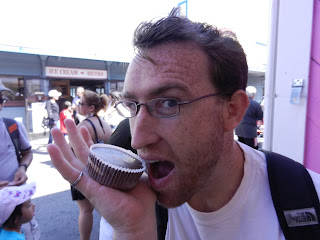 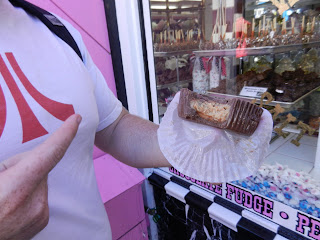 Because everything's bigger in Texas. And Oh So Delicious.
Because Anything Goes in California
The California Sea Lions you see around Monterey Bay are statistically 95% male. 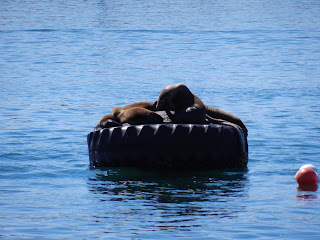 They love to spoon. California is a very liberal and accepting state :)
Monterey Marine Life That is Not Whales
Out new camera has an epic zoom. 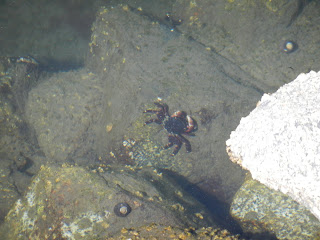 This video highlights our epic zoom. Look how tiny it is!
California Brown Pelicans and California Sea Lions - who knew a walk back to a car could be so biologically diverse? 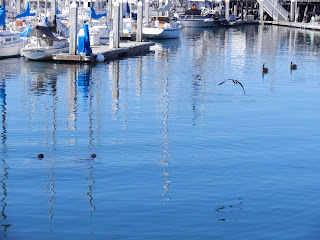 Two in one photo! Excite! 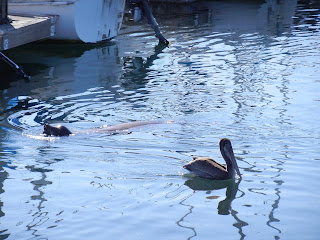 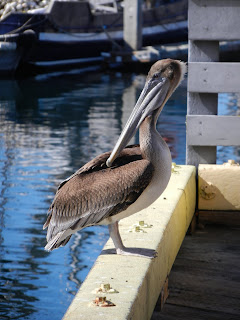 And because Colleen can not help herself and must always push the boundaries when approaching wildlife: 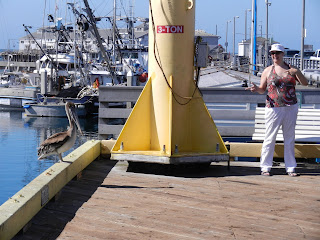 (That Pelican definitely gave me the stink eye!)
Lessons of the Day for all Future California Tourists
1. Book your whale watching tour for the morning - it is less choppy
2. Check the time of year you want to tour and what is migrating or in the area.
3. Take some Gravol - even if you don't normally get motion sick, remember Colleen loves roller coasters and has no problem reading in a car and she vomited.
4. VOMIT! You feel so much better after you do, ans so many others are doing it you don't feel strange or on the spot. Trust Colleen, the experience is worth the discomfort and once you return to port you will feel perfectly fine.
5. Make sure you vomit off the stern of the boat - other passengers do not appreciate the wind carrying your vomit into their faces. 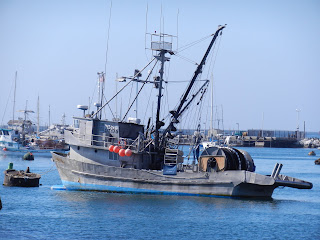 Posted by Colleen Speed at 8:22 PM