Disclaimer: I do not normally stalk my dog Andy so much with a camera. There are two reasons I've made a post specifically about my dog and his time at the cottage this past week.
1) We have a new camera and Andy has suffered from second child syndrome in that we don't have a lot of photos of him and
2) Steve hasn't seen Andy since April and would enjoy seeing Andy have so much fun.
If you are not a fan of an owner photo pimping their dog so much, move along, there is nothing of interest for you in this post - and you are not human because who can resist Andy's chubby face?
A Water Dog - Who'd Have Thought?
Andy loved the dock. He did not however love leaving the dock to get into the water. He likes to walk into the water and would not try stepping down into the water as he thought it was too steep. 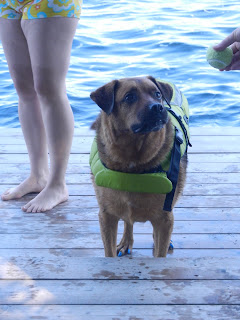 He wears a life jacket because he loves balls. A lot.
You could throw a ball super far and he would go retrieve it regardless of how far it or tired he is. So he has always worn a life jacket in the water in case he suffers fatigue. Except apparently he will not jump in after a ball.
Eventually I picked up his front paws and put then on a rock just off the dock into the water to show him the rock was there.  He was still uncertain but would risk it to recover his precious ball. 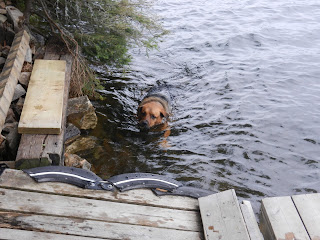 That evening we didn't want him to go in the water because he'd be wet to go to bed so figuring he would stay out of the water if we didn't throw a ball, I did not put his life jacket on him.  He surprised us all by entering the water on his own and just swimming for the sake of swimming.
He seemed so much more relaxed and confident without it I didn't put it back on again all week.
Everyone Loves Marine Land 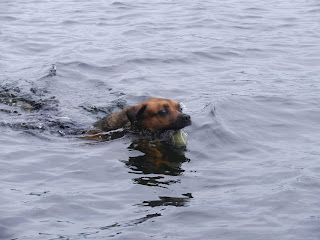 Andy spent many a hour chasing balls thrown into the water, retrieving them and stomping on them in the shallows. 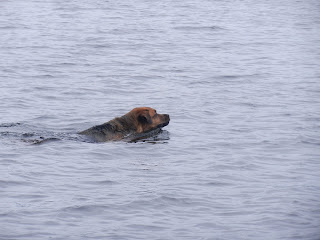 When he's on the retrieval of a ball he really pours on the gas.
He would accelerate and the front part of his body would start to lift out of the water like a speed-boat. 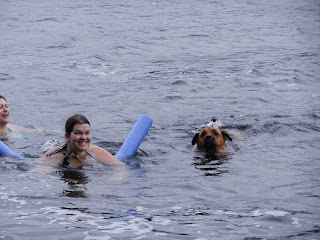 None of us could out swim him when he was on a mission. 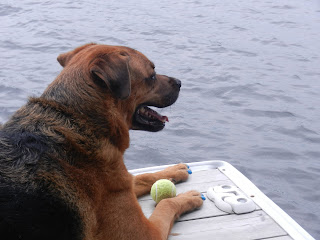 Andy enjoyed relaxing on the dock, ball between his paws and keeping an eye on the neighbour's ball-like buoy in case it ever moved and needed retrieving. The rock buoy that he attempted to retrieve once looked remarkably like his jolly ball which soon joined the water fun.
From then on the tennis ball was replaced with his jolly ball 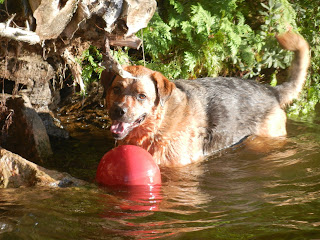 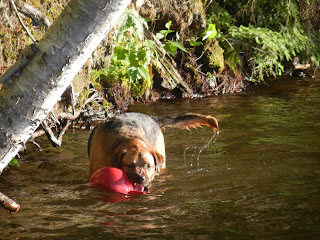 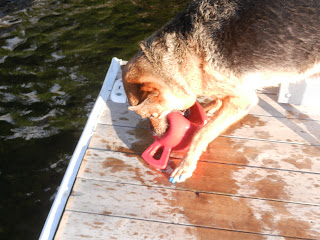 "I'm Slightly Concerned..."
Anytime Andy was on the dock and people were in the water, you would see this face 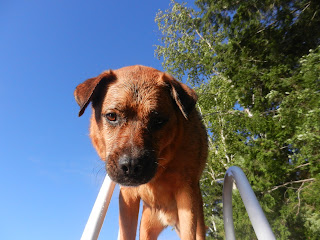 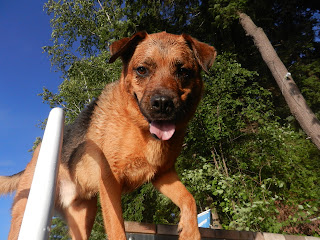 The worst though was when I tried to leave in the kayak. Andy was having none of that and was determined to join me. 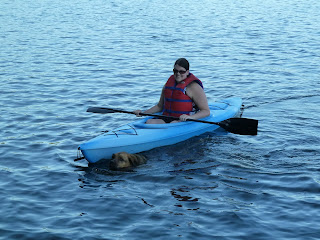 You can see Andy try to climb in the kayak with me. Good thing he's wearing his nail caps so he didn't scratch anything.
Nap Time
Andy had so much fun, he would be so exhausted any time we would come in from outside 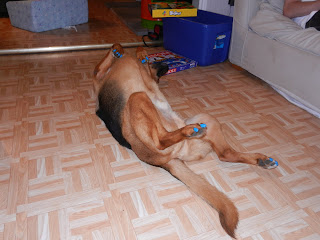 And even when we still were outside 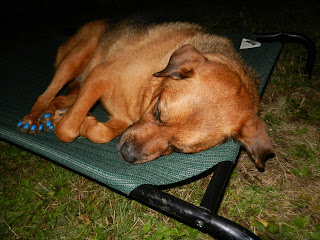 That is if there weren't bugs that needed to be exterminated. 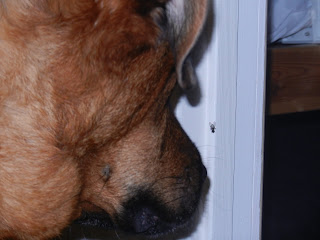 Andy had a fantastic time - though he was determined not to be left behind as we packed up. 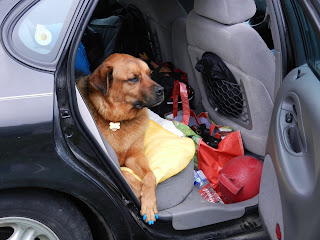 He jumped in the back seat as soon as the blankets were down and I had to drag him out to join the group photo because he refused to budge.

"Thanks for letting my people rent the cottage, 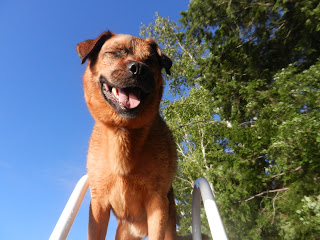 it was fun and made me happy."
Posted by Colleen Speed at 4:12 PM