I (Steve) arrived in Clinton on Saturday afternoon. After greeting a crazy wiggly Andy, he followed me around as I packed the car up. Tetris skills came in very handy, considering I needed to make sure for the next 6 nights, I could unpack the luggage I'd need, without the rest of the clown-car falling out. I finished up, had dinner, and set my alarm for 5am, in order to drive the route below

Waking up that early was surprisingly easy. Andy and I said bye to Jean, got in the car, and started our drive. We picked up some Tim Horton's (don't leave Canada without it) and made our way to the border. I had to wait for a bit while they processed my paperwork to import the car (they didn't care about any paperwork to import Andy).

Side note, while waiting I saw a family's vacation get ruined by not knowing the rules. Rule: If you're going to the US to visit, make sure your passport is valid for atleast 6 months. If it expires before that, they won't let you in.

After being released by the border guards, my newly minted Ameri-Dog and I headed to Detroit to complete the team.

Detroit didn't look as bad as I was led to believe, but then again I didn't see that much of it. Around 9 mile road I saw a whole row of abandoned (and some where fire-damaged) crack houses, but I had a full tank of gas and the highway was fine, so I just kept trucking to get to the airport to pick up my navigator. I pulled into the pickup zone, checked my phone for text messages, and saw Colleen had just landed about 20 min before. Perfect timing (for me, see below for her story).

It Was Hot and Sticky

Not the fun kind of hot and sticky either.

The tail of the aircraft I (Colleen) was suppose to arrive in broke before take off in San Francisco. As a result I arrived 3 hours later than planned (and grumpy since we switched planes for one with a non-broken tail and I lost my extra leg room that would have been really nice for me to be able to stretch out my surgery leg), but right on time to be picked up by Steve.

As soon as I left the airport I knew I wasn't dressed properly for the humid heat of the Great Lakes region. I was wearing jeans and a quarter length sleeve sweatshirt. And our A/C was broken in the car.

Fortunately we had planned to meet a friend of mine in Ann Arbor, MI who was coincidentally visiting friends of hers. I was able to change in the bathrooms of Panera Bread hobo style, and now wore my only cool pants for the trip, which incidentally where white.

While I visited with my friend (and tried to focus on the conversations which was hard since I didn't sleep at all on the plane) Steve went to the local REI and bought a reserve gas tank (for Nevada mainly) and filled up our camping fuel canisters with white gas.

After about an hour we were on the road again, determined to out drive the heat. 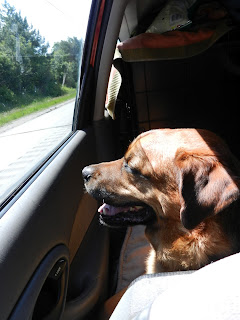 Andy would like to remind you how stinkin' hot it was in a car with no air conditioning.

Have I mentioned it was hot and I was grumpy? Well I missed our turn off for the I-90. It was fixable but we'd have to drive through Gary, Indiana. Steve gave me funny looks and I started singing "Gary Indiana" from the Music Man, and then I remembered an email a friend of mine had sent when I shared our route with him. It read:

Have fun!  Don't stop in downtown Detroit or Gary though.  They can be less than pleasant.

The town (city?) of Gary was deserted. In retrospect it was more deserted and run down than the ghost town we slept at in Nevada. 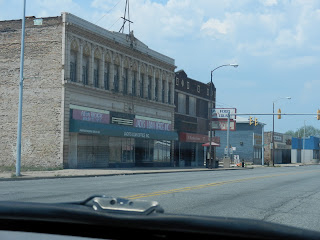 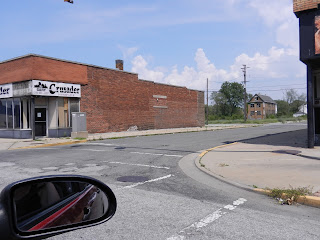 we thought it was probably best not to make a spectacle of ourselves as tourist gawking at a city that was probably lovely before industry shut down. 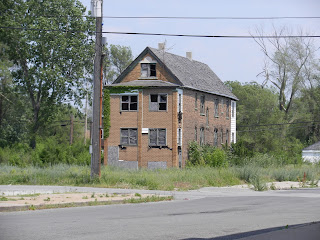 There were streets lined with houses that all were in the same condition as this one. Streets! 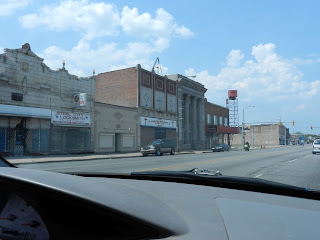 There were some lovely historical buildings that looked like they had been bombed (well as far as we can relate to bombed out buildings from movies we've seen of WWII) We didn't manage to get a photo of any of the really nice stone work buildings that were shells of their former self. 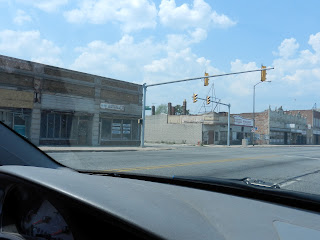 We were too busy just taking it all in. Store front after store front empty.
Terribly depressing. 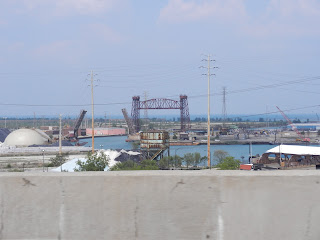 Next time Lake Michigan, next time.

There is Probably Song About Chicago

In Chicago we hit traffic. In fact this is the worse traffic we hit the whole trip. 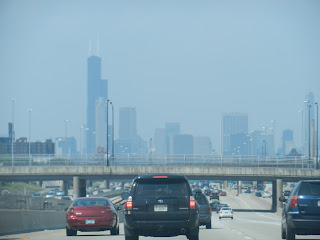 It worked well to get some good photos of the Sears Tower. 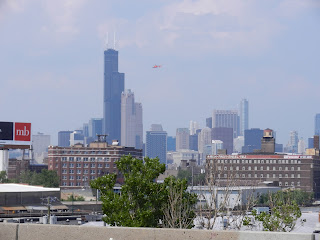 We were actually surprised that the I-90 took us right by the city centre. 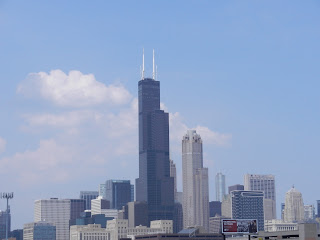 Andy would like to remind you that stop and go traffic without air conditioning is stinkin' hot. 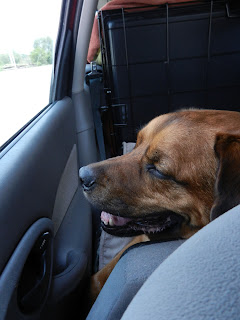 Steve would now like to interrupt this post to rant about his favourite part of Indiana and Illinois.

So I had no idea there were so many trains in Chicago. I had a great thing lined up for this about how it's not "the rainy city" it's "the trainy city", but that totally falls apart when you realize it's actually nicknamed "the windy city" 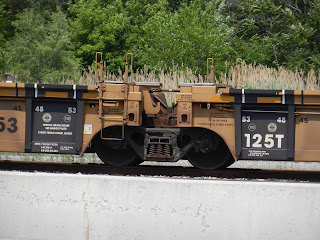 I have to admit: Trains are really cool. They make everything better. Driving under a bridge is better if a train is going by on that bridge, and being stuck in traffic in Chicago traffic with no air conditioning is better when you're crossing over a bunch of railroad tracks with long cargo trains trucking along.

By the end Colleen was definitely laughing at me as I pointed out more and more trains. Trains are interesting  in an absolute sense, but when you're stuck in city traffic and running on not enough sleep, they're the coolest thing ever. 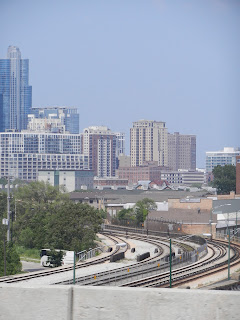 A Break of the Heat with a Storm

Did we mention that it was stinkin' hot? Well it was. And when we stopped for gas in Wisconsin, south of Madison we also got some Slushies. 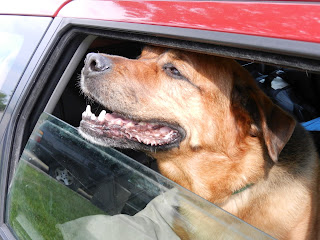 As we were packing up to get back into the stinkin' hot car, we felt a cool breeze. Cool breeze? Impossible. This is what we had been facing while drinking our slushies 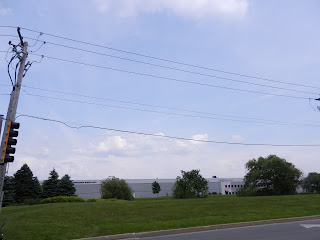 And when we turned into the direction of the cool breeze we saw this: 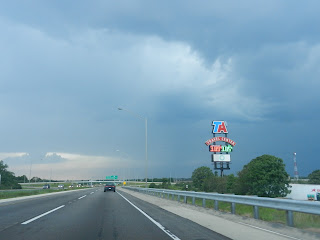 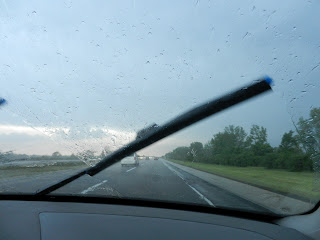 Finally a break in the heat.

We stopped for the night in Portage, WI but were both too tired and finally cool enough that we found food, took showers then went straight to bed.  The next day promised to be exciting with Wisconsin Cheese, the Jolly Green Giant in Minnesota, and Badlands National Park in South Dakota.

As long as it wasn't going to be stinkin' hot, we were ready for anything.