Steve and I have been training for volunteer positions at the California Marine Mammal Center, which rescues, rehabilitates, and releases injured or sick ocean mammals. Their patients are primarily elephant seal pups, harbor seal pups, and sea lions. We've been training for stranding which means we will be on call to

Today I attended my first release of a group of elephant seal weaners (yes that's what they are called at that age), and sea lion pups.
The first group released consisted entirely of sea lion pups. Two had already entered the water before I started filming. Sea lions are very agile on land (and bitey) so since it was my first release I didn't want to take photos instead of concentrating on the task. 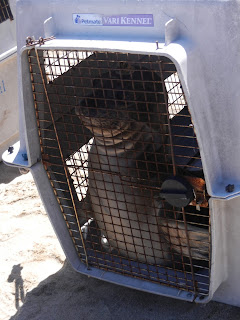 Elephant seal weaner is eager to leave the carrier. Both flippers were up but I didn't get the photo taken as I was trying to avoid eye contact to help reduce the weaner's stress. 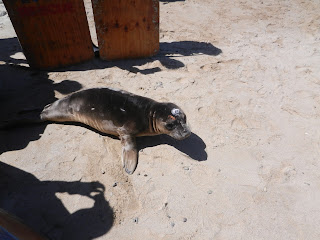 Boards are used to protect the volunteers and to hide the silhouette of a person so the seals and sea lions do not acclimatize to people.

The boards also help with directing the seal towards the ocean. Elephant seals have no natural land predators and have no fear of humans but will move to avoid having their back flippers crowded. 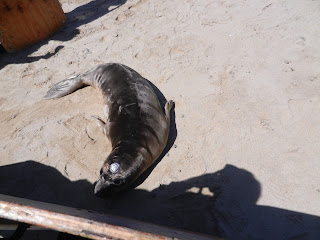 The "party hats" on their heads are for identification. If someone is around when they pop their heads out of the water, a number can be recorded and reported to the Marine Mammal Center. They will fall off when the weaner is old enough to molt.


Weaner party!
(The dance of choice at a weaner party is evidently the electric worm) 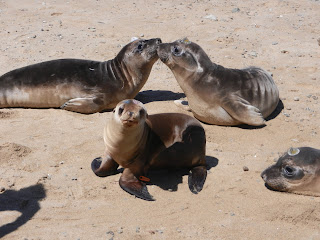 Once all four weaners were free we released a final sea lion pup so it would guide them to the water as the weaners would just move a few feet and then start throwing sand on themselves and go to sleep - lazy weaners. 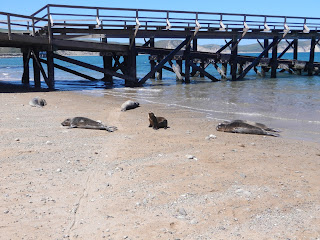 Three of the four weaners joined two weaners who were on the beach of the rookery already. 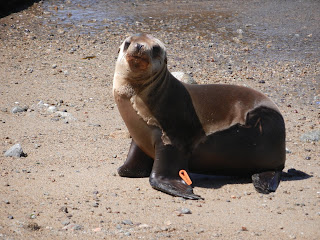 The sea lion was a little stinker and kept hanging out with the elephant seals or attempted to come back up further on the beach. 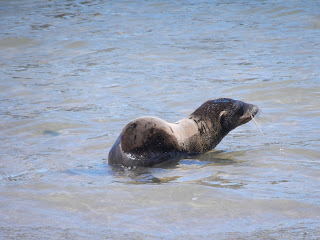 Finally entered the water and one weaner followed it.

An amazing experience. Every time I go see elephant seals I see researchers in among them. I always think, I want that to be me. Today, that was finally me among the seals.

I'm hooked and I can't wait to go on my first assessment and rescue.
Posted by Colleen Speed at 9:40 PM