Colleen and I have been signing up for volunteering at the Marine Mammal Center recently. We've been on-call for stranding (go out and collect an injured mammal) twice, but this morning we got our first call.

"Hey, we are transferring two sea lions and one harbor seal from Monterey Bay to our main facility. Can you help drive?"


So it began. We drove to the main center in Sausalito. It was a "medium" kind of fog. Not like driving through mayonnaise, but not clear either. 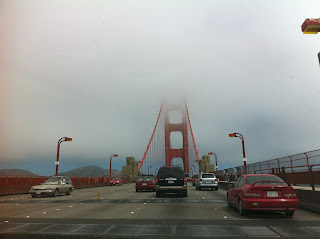 Once we arrived, we helped load the truck with some supplies destined for the Monterey Bay facility. 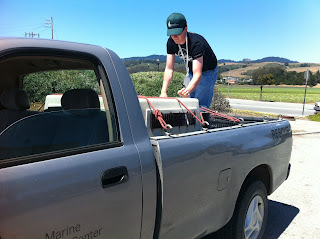 With the truck tied down, we headed south. After cruising down the coast on Hwy 1 for about an hour, we pulled off at a gas station in Half Moon Bay and waited. Truck 2 (the truckening) showed up with another volunteer. She had driven from Monterey, and there were also three animal carriers tied down in the back. Basically, it looked just like our truck, except there were seals in the carriers. Stinky, stinky seals.

Not to keep the seals waiting, we switched trucks, and the other volunteer headed back to Monterey in our stink-free truck with fresh carriers and supplies. Colleen and I jumped in the stench truck and started driving. As long as we kept moving, the stink couldn't get us. 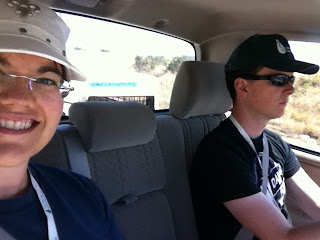 Colleen: "Ya know, when we decided to move to California, I didn't expect
we'd be driving a truck full of seals up the Pacific coast. Worth it."

We couldn't really see Musty (one of the sea lions), or Purpy (a harbor seal), but Pix-up-Stix (the sea lion tied in right behind me) was busy either sniffing the bars, pooping, or attempting to escape through the bars. When he relaxed, he would just drift his head around like he was grooving to some slow jazz. 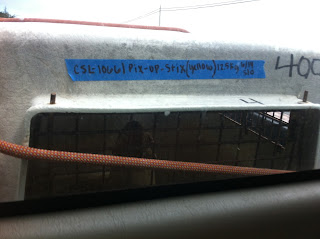 An hour or so later, we go our new patients back to the Marine Mammal Center. We helped unload them, weigh them (still in the crates), and then put them in pens. The harbor seal was so lethargic it seemed dead, so it was easy to "pour" it out into it's pen. The two sea lions were older and more active, so it involved using the boards to make sure we didn't get bitten. Sea Lions (dogs of the sea) are very "bitey" and don't take no crap from no one. The transport coordinator working with us also needed to ninja in and get a grease marker mark on them (to keep track of which is which) as they came out of the carriers. That worked once, but the other scampered away before we could mark him. Next time.

Some simple cleanup afterwards, and packing away the truck, and we were off. Mission accomplished.

Note: Colleen wants me to point out that only the harbor seal is a seal. The two sea lions are sea lions. They're all pinnipeds. I use "seals" because I'm lazy and not a scientitian.
Posted by Steve Armstrong at 9:16 PM

Email ThisBlogThis!Share to TwitterShare to FacebookShare to Pinterest
Labels: Pinnipeds