Always Watch for the Bitey End

Yesterday we were called in for our first sea lion rescue.
Note: This post doesn't have a lot of pictures because we were (understandably) more focused on the rescue and not on taking pictures and selfies.

Since we live in East Bay we rarely get called on our On-Call days. We've always speculated that if we were to be called it would be because of an adult sea lion who is sick and has been turned around in The Bay looking for a place to rest.

This scenario is a challenge for a first stranding rescue because:

1) California Sea Lion rescues are more challenging in general than harbor seals or elephant seal, as they are a lot more agile since they can walk on all fours. Harbor seals and elephant seals can only move in a worming thrust movement.

3) sea lions are prone to hauling out on a dock. Dock rescues are tricky as the person netting the animal basically has one shot to catch the sea lion and the rest of the rescue crew has to run in to prevent the sea lion from immediately rolling into the water when threatened (try hauling 300 lbs of netted fighting animal out of the water, we weren't eager to try that).

4) it would be our first rescue where we were helping net an animal and not a person pretending (like in training).

When we arrived to the location we actually couldn't find her and after speaking to some locals learned that some children had approached her and scared her off.

Fortunately we met up with a more experienced stranding volunteer who suggested we hang around and keep checking the surrounding area because the sea lion, if sick or injured would most likely haul out again nearby. 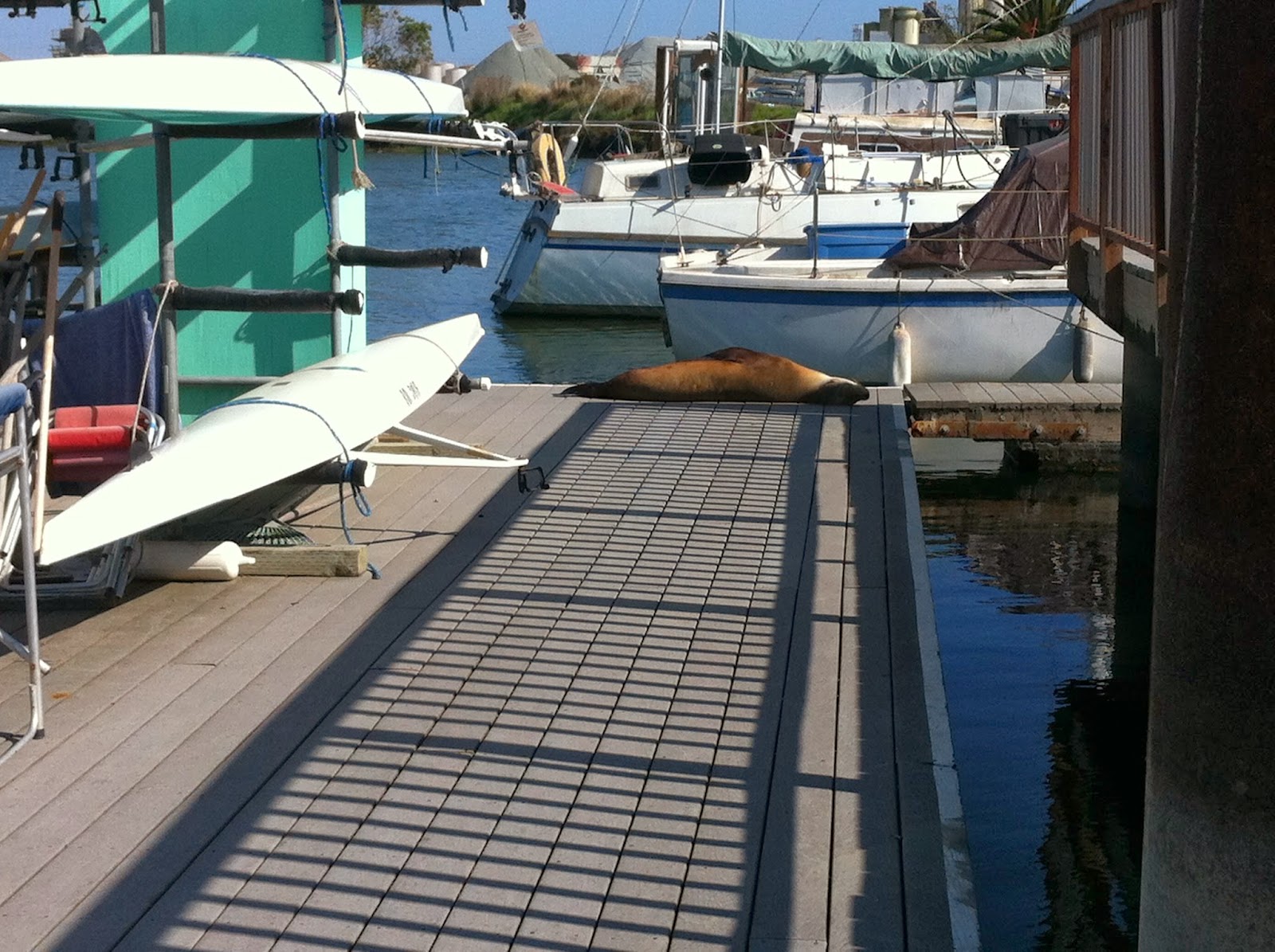 The first dock we checked, there she was.

So let's check our challenge list
1) California sea lion - check
2) Adult - check, (though we were fortunate she was only around 200lbs and not an adult male)
3) Dock - check (with two locations she can easily try to escape into the water)
4) A real animal, not a person - check

Talk about jumping in to rescue with both feet.

Of Training and Preparation


During training we are given a list of things we should put in a tote, including snacks, water, sunscreen, and folding camp chairs.

It seems like an odd list to have but before a rescue can begin there is an initial assessment of the animal (things like location, alertness, weight, visible injuries, and behaviour). Once these particulars are shared with The Center they send out a truck with the appropriate equipment for the size and species of the pinniped.

And watch the sea lion.

And drink some water.

And interact with the public to explain our presence and answer questions.

Chairs, snacks, water, and sunblock now seem like very important things that we included in our stranding bin.

After making its way an hour through traffic, the truck arrived with another volunteer and our supplies so the rescue can begin.

Strategy, Docks and One Chance


Before any rescue a plan is devised based on the animal, number of volunteers and environment. In this case the sea lion was located on a dock so our biggest concern was getting the net over her so she was trapped the first time. We would not get a second chance because she would spook, roll into the water and most likely another team would have to be called again the next day.

We worked in a group of four volunteers total, one netter and three boarders. The sequence was basically:

And it went off without a hitch, except for things like:

Then it's a "simple case" of carrying a 200lb dog carrier with a moving grumpy and sick animal across the parking lot and into a truck. When tying everything down, Colleen learned that she should really learn to tie different knots and Steve's knot mastery from scouts had a chance to shine.

So the sea lion, named Marialtus by the member of the public who called her in and watched the rescue, was admitted as a 78.5kg (172.7lbs) patient, and is listed on their current patient list. Right now no diagnosis or other info is available, but we'll keep an eye on her. Hopefully she has a happy ending with a successful release, like these ones.

Marialtus was determined to be suffering from domoic acid toxicosis. It's acute which means there is a good chance she can be released without stranding again (as opposed to chronic, which we can't treat).


What is domoic acid toxicosis?

It's produced by algae, generally in larger blooms (think red tide) and accumulates in fish and shellfish and works it's way up the food chain. Marine mammal predators like sea lions can offer us early warnings about the health of our ocean and location of algae blooms. Domoic acid toxicosis can affect people who eat contaminated fish.

For us, marine mammal rescue with The Marine Mammal Center is much more than just saving sea lions and seals (but that's pretty awesome too!), it's about contributing to the research that tracks the health of our oceans.