And it deserves it. The 64km route (40 miles) has as many as 300 deaths per year. It's even been immortalized on BBC's Top Gear. Despite (or because of) this, when Karen asked what our number one thing we wanted to do in Bolivia was, we answered: "biking the death road". 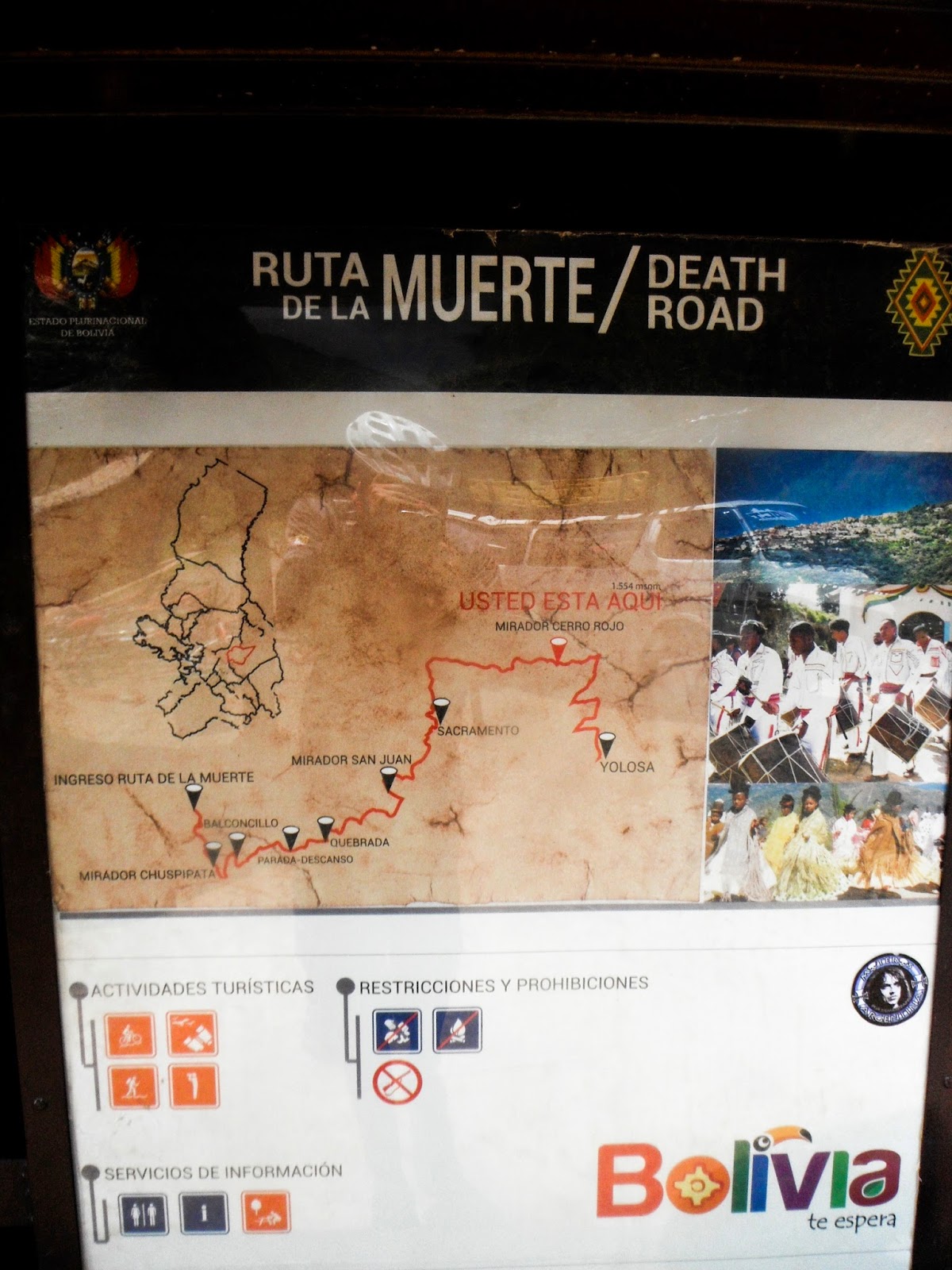 This route through the mountains used to be really busy (see the Top Gear episode), but they've built a bypass highway in recent years, and now the upper part is paved and wide, and the lower part (now redundant) is basically for tourists on bikes (or buses if your are really lazy). We went with Vertigo because they had good reviews, good safety, and smaller groups. We recommend them, and will go with them again anytime we're near La Paz. 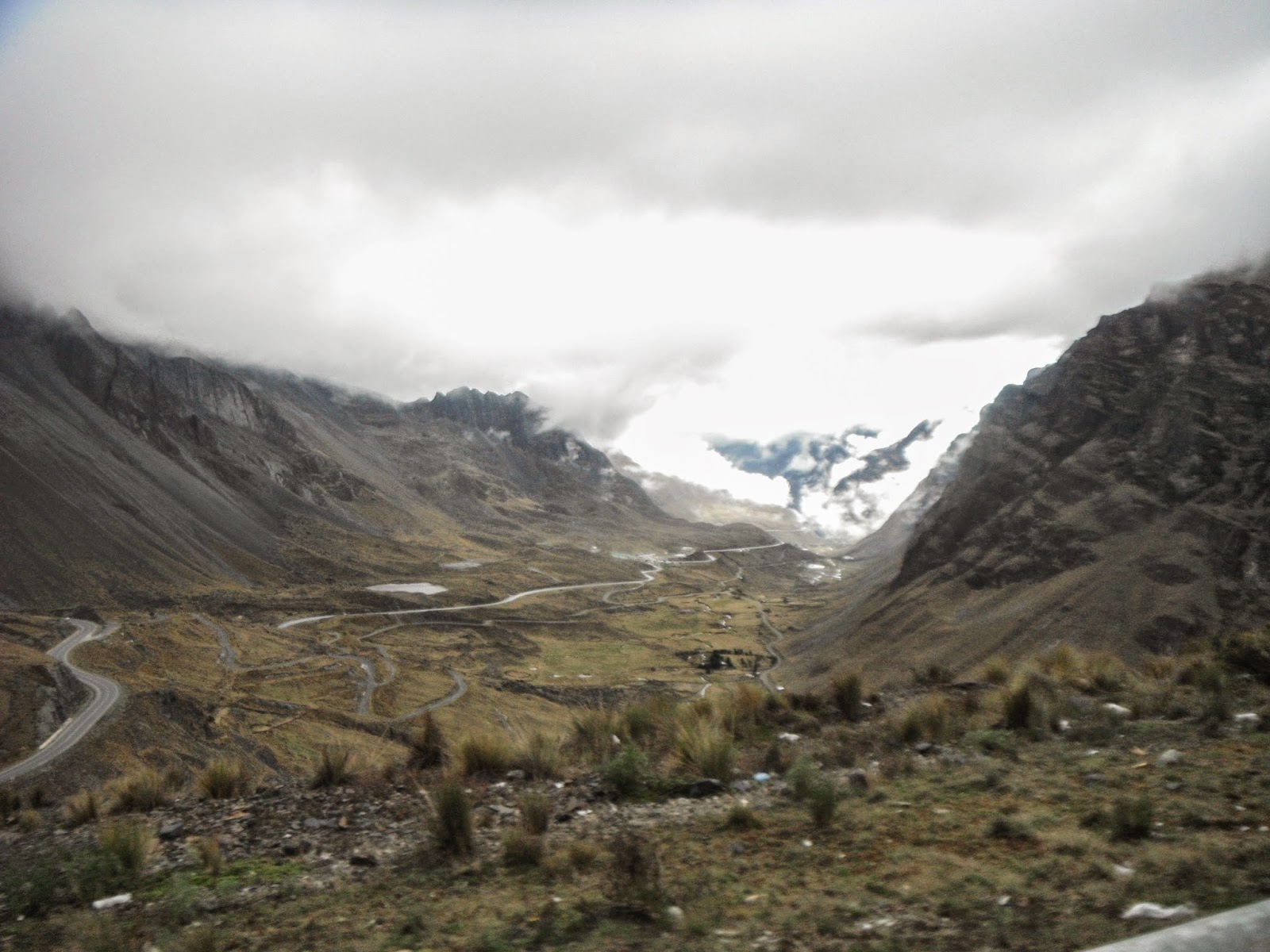 We suited up, got used to the bikes, and got ready for the first leg of our trip, which would be on paved wide roads (not the official death road, just the route to get to it) and at a faster speed.

We thought that sounds fun. 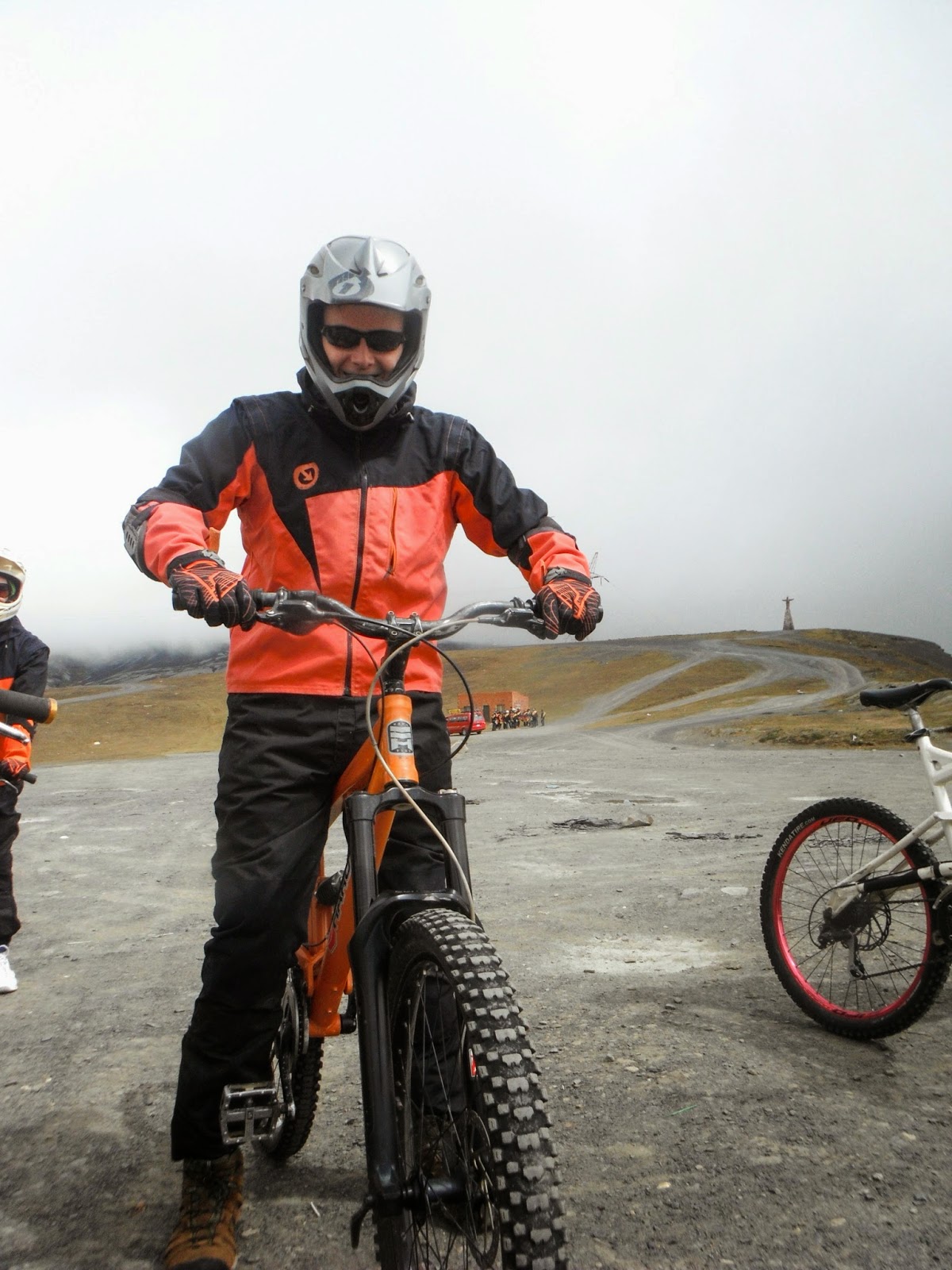 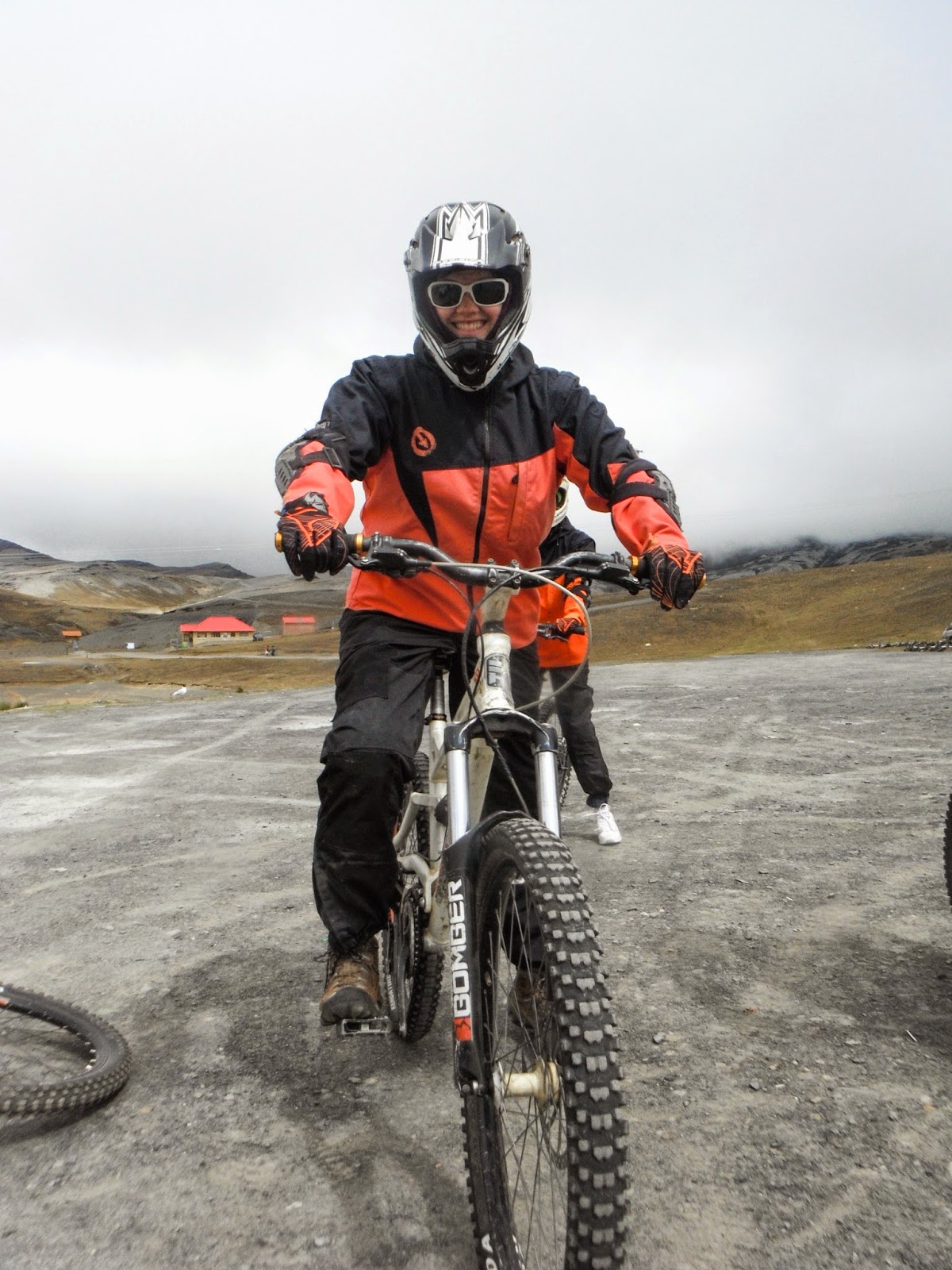 It's important to know that Karen probably didn't think it sounded as fun. She had not been on a bike since she visited Steve and Colleen in Ottawa (probably 7 years ago) when she rode once, on mostly flat paved bike paths, for the first time "in a while". It took Colleen 8 months to convince her to come biking with us ("They built a bypass so there's no more cars", "The company is really good with safety", "A van follows you the whole way down in case you think you can't finish), but she was there, and was going to power through. Steve stayed with Karen as she got her wheel legs (this is a term I've decided to try to coin), while Colleen went further ahead with the random stranger and kept pace with the insane speeds of our guide.

The views were phenomenal, 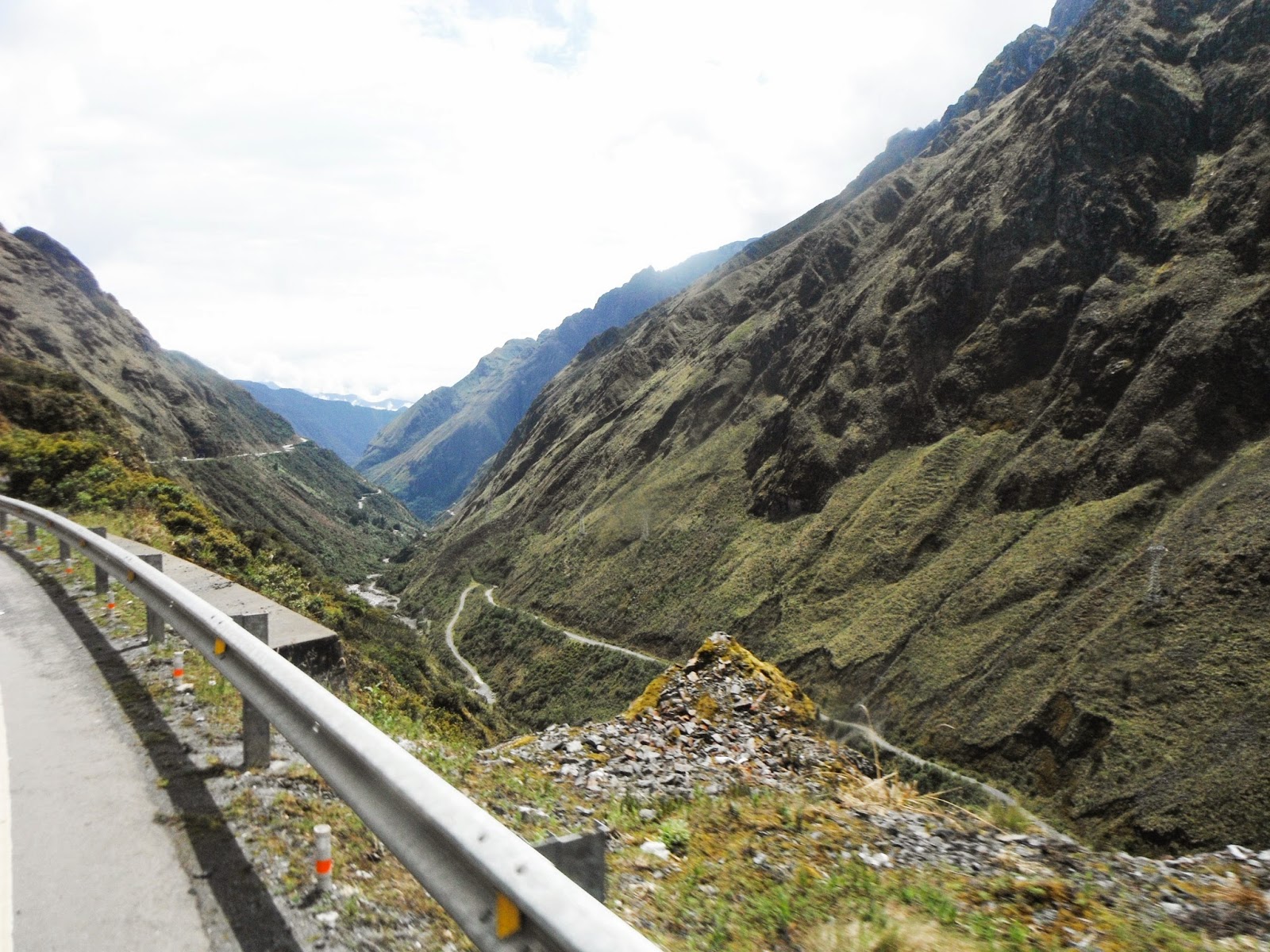 and biking down means optional pedaling. It also means fast.

The wind got really cold sometimes, and it was almost too easy to never brake and get up to ludicrous speed. 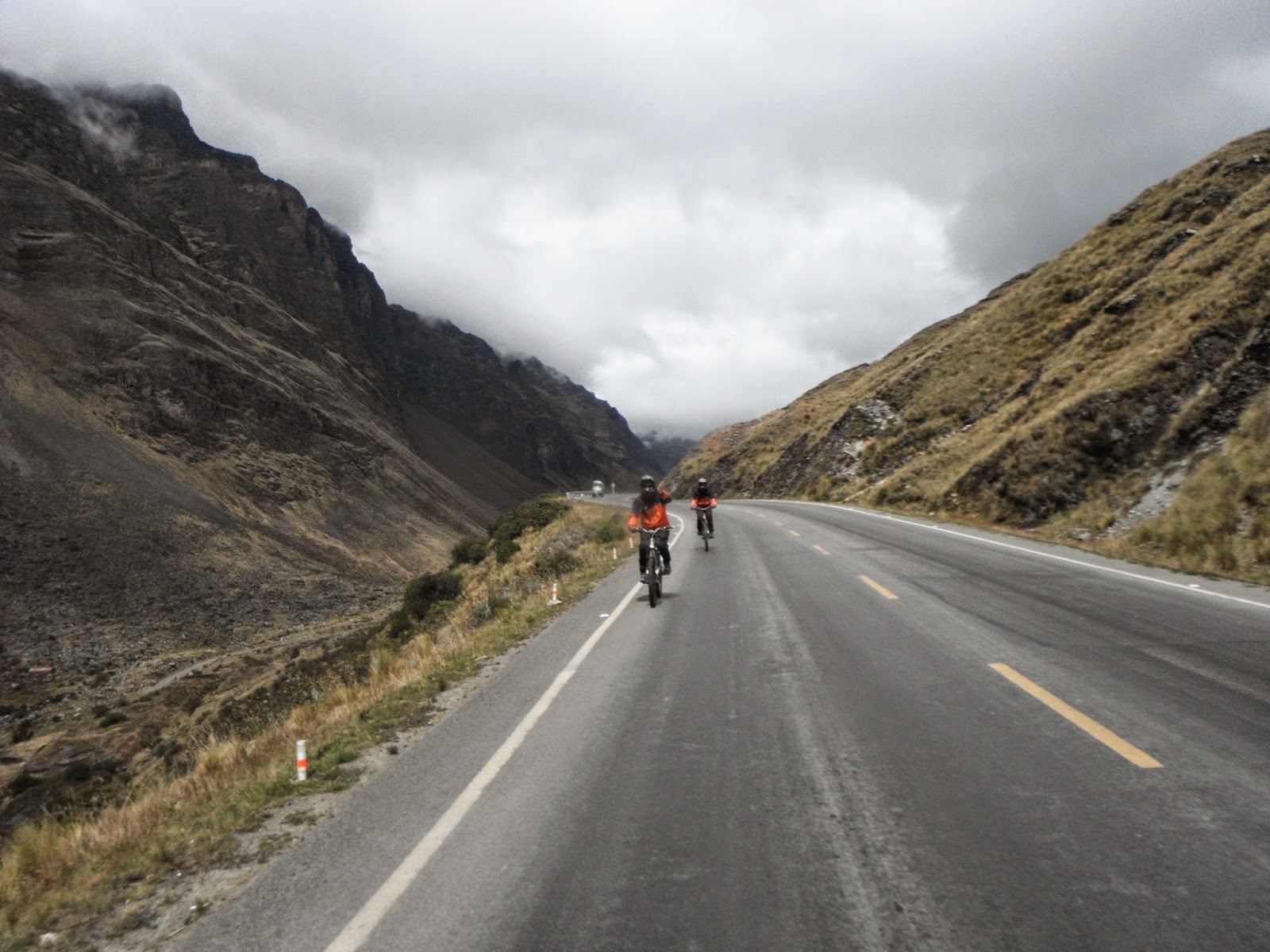 With a brand new road and gradual turns though, it was amazing. 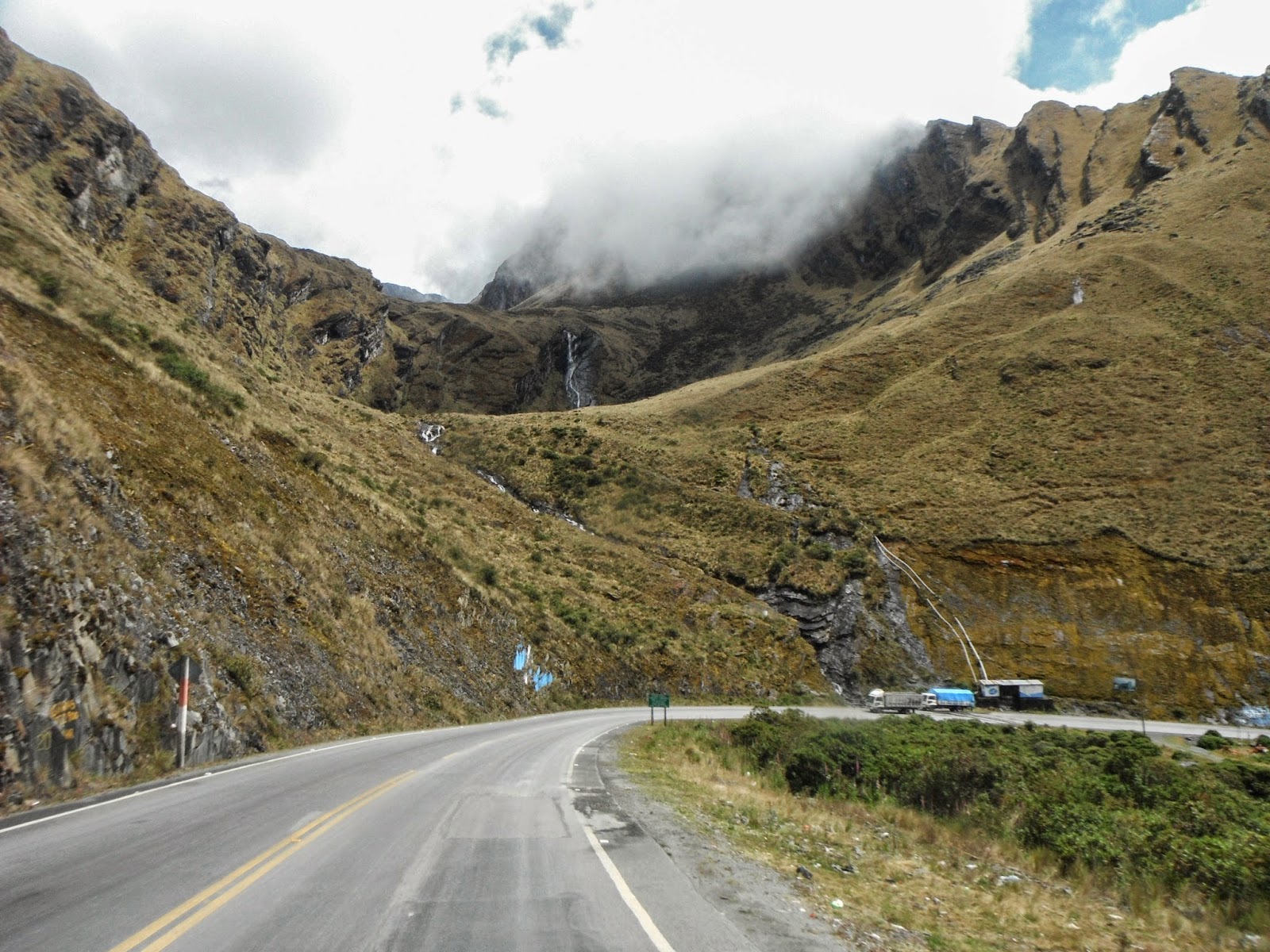 While there was more than 0 other cars, the traffic was still pretty low. Karen got used to biking pretty quick, and even passed a transport truck. 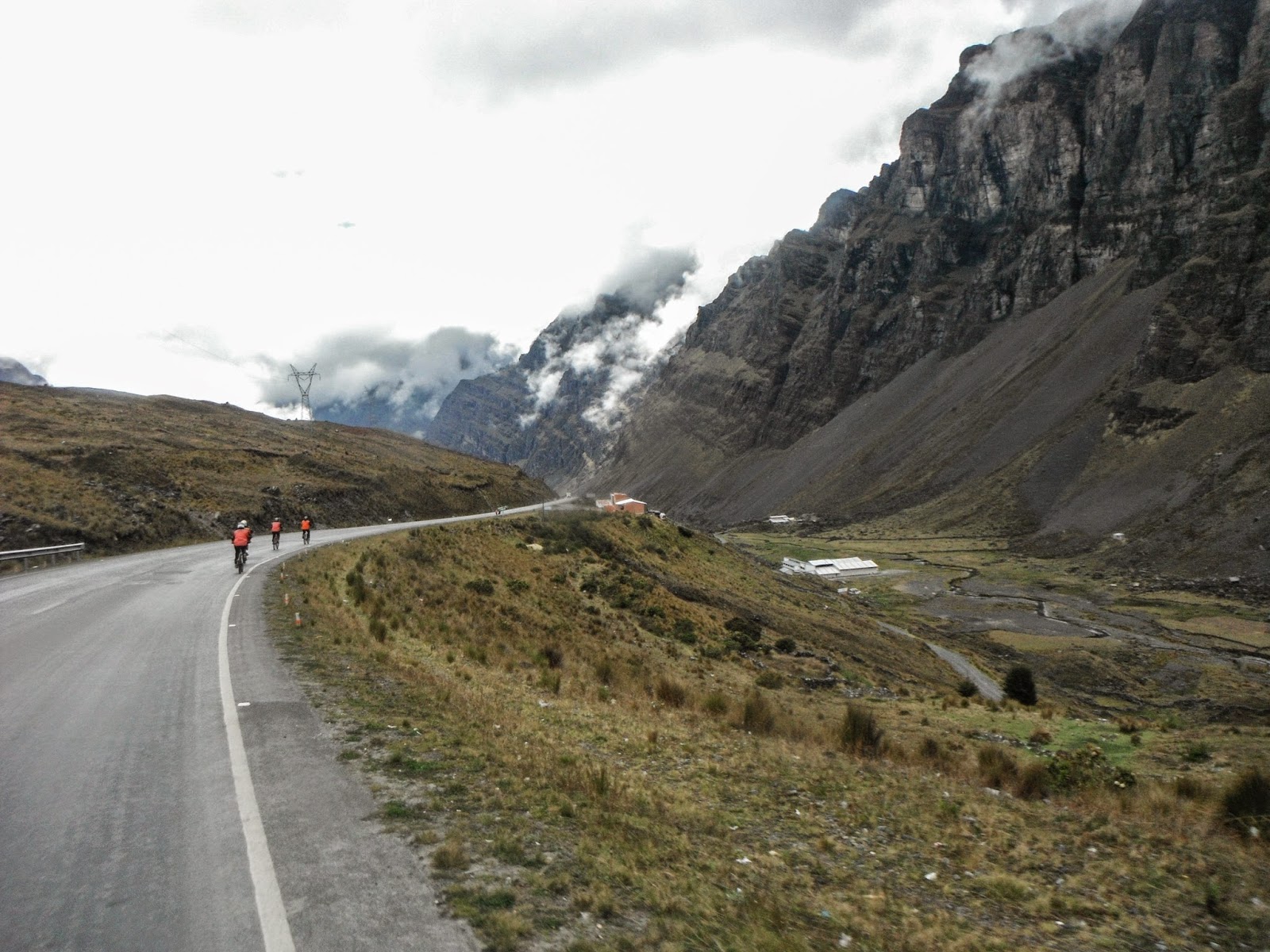 At a checkpoint, we switched up and Colleen stayed back with Karen while Steve tried the "go way too fast down a mountain" part. 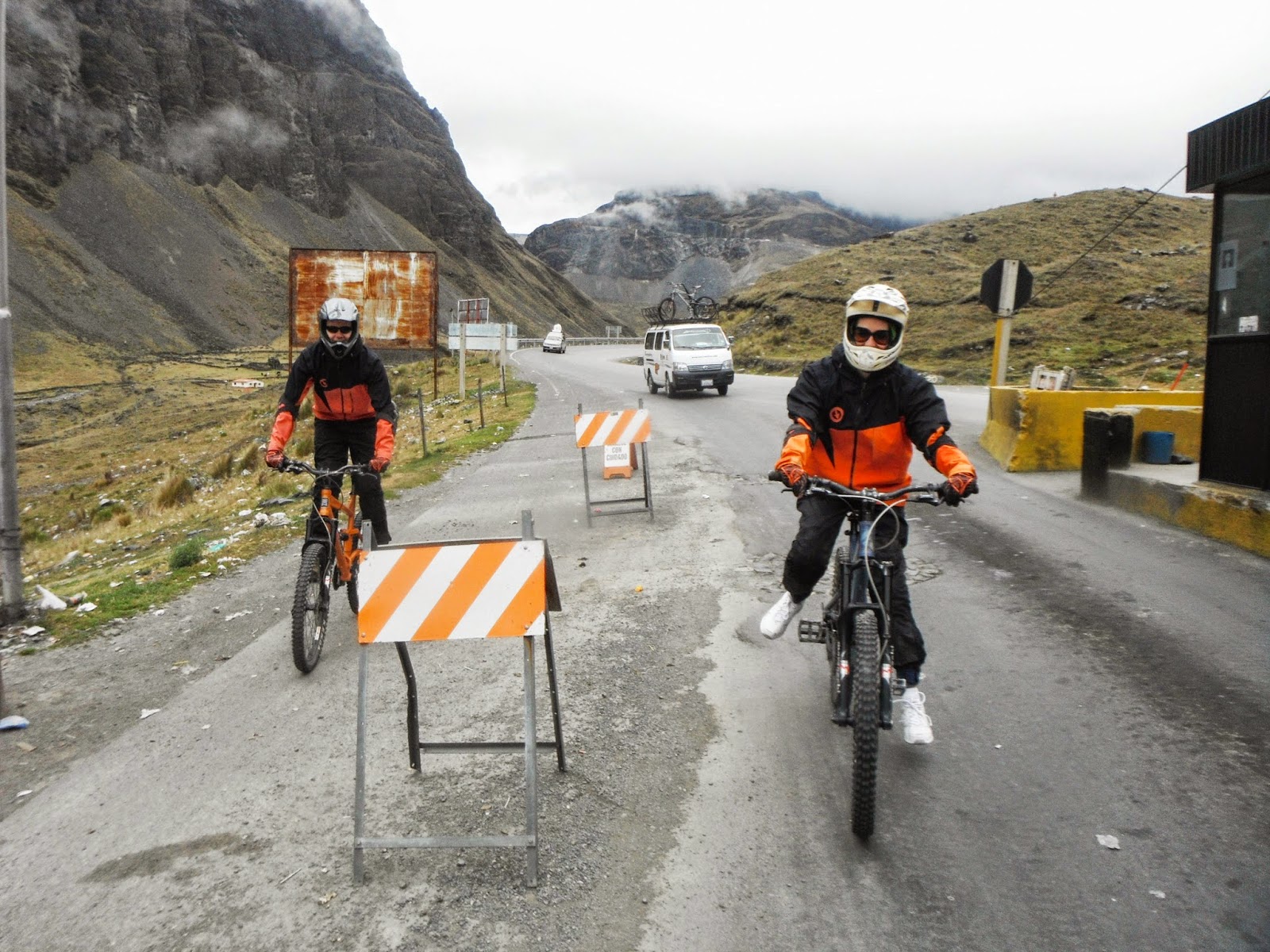 We reached a thing. I guess "pit stop" makes the most sense, but it was a row of shops barely clinging to the edge of the road. Maybe it was a town. 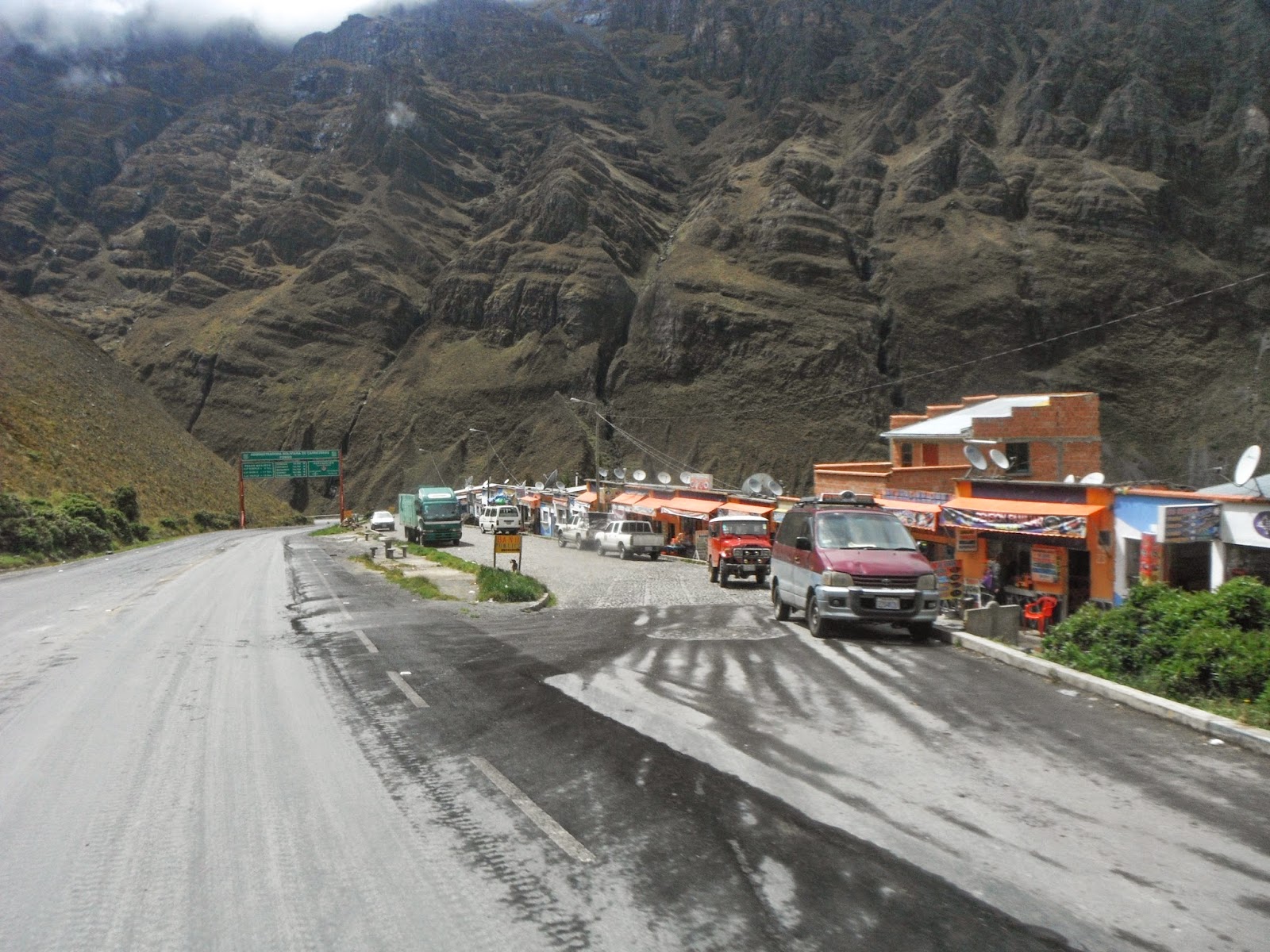 We ate lunch here, bought our passes to be allowed on the real death road, and piled back into the van. They drove us a couple miles (because it was slightly uphill, and tourists are lazy) to the top of the next phase. 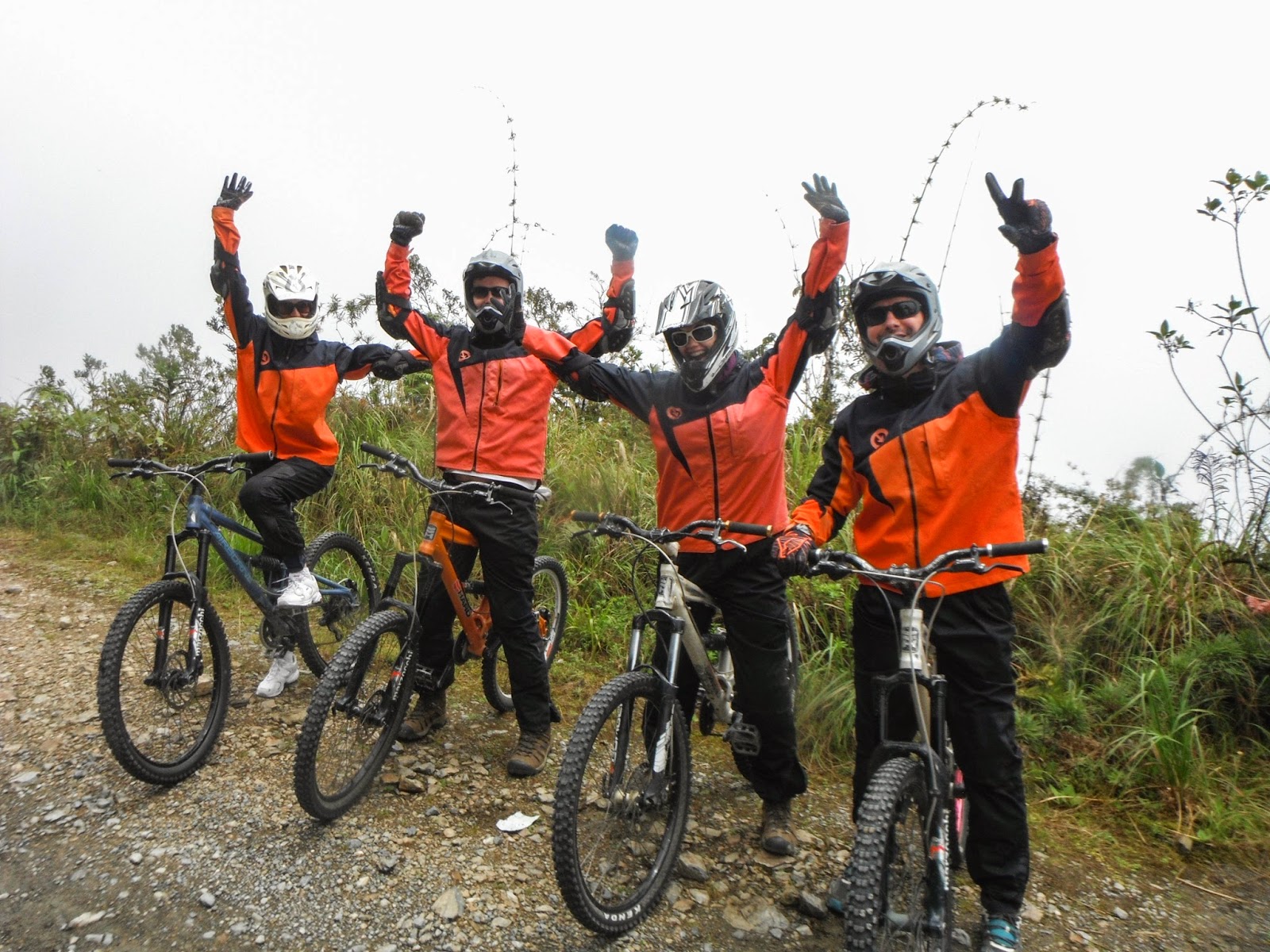 The van turned off the paved road to a path of hard-packed gravel, with no side rails. We were here. 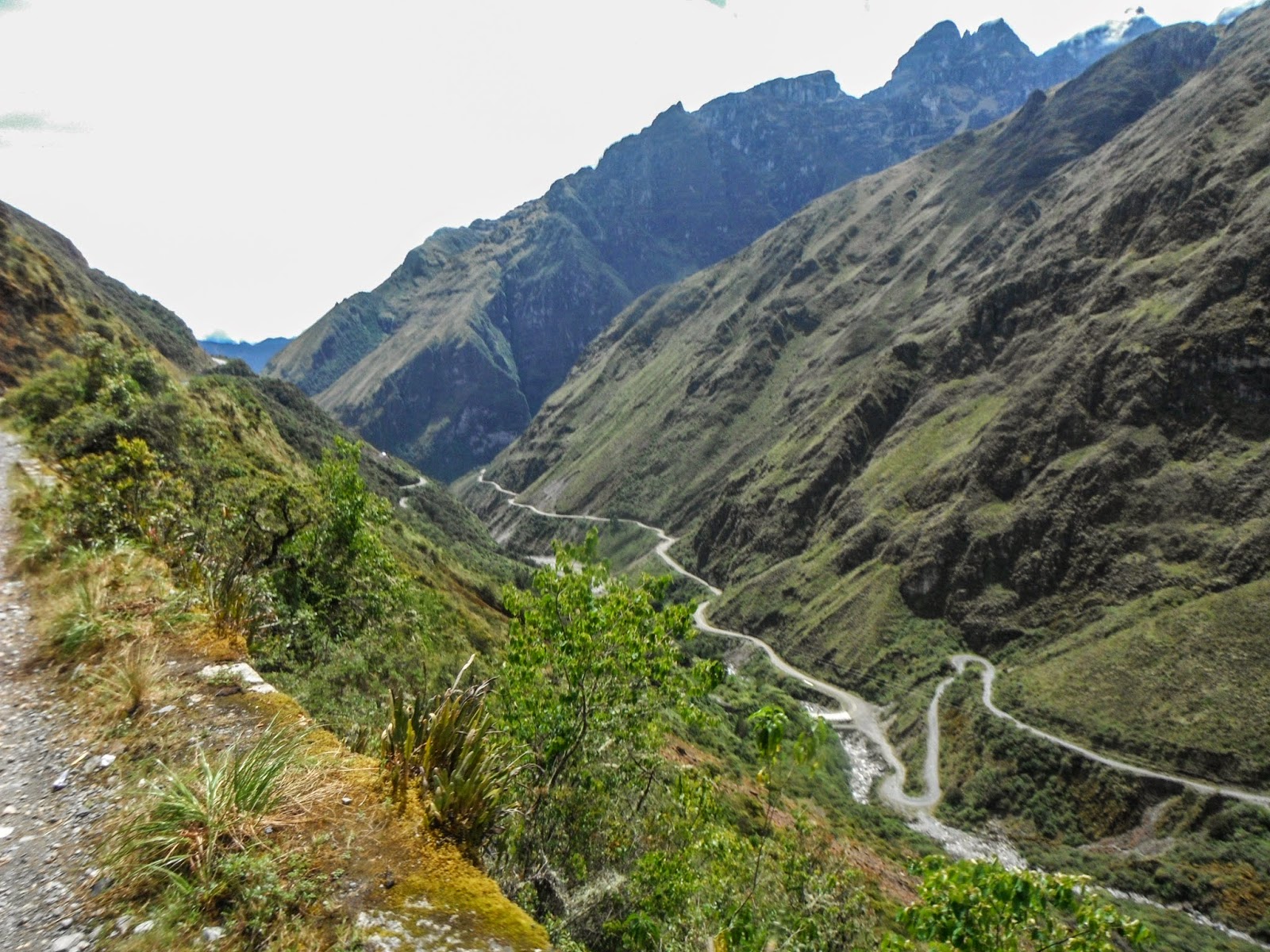 We pulled the bikes back off the van, and got a quick safety summary. The cars drive on the left side of the road here (not in Bolivia, just on this part of the road) because the drivers must be able to open their door so they can see the edge of the cliff on their side. That's how thin it gets at some points (again, see the Top Gear episode above). 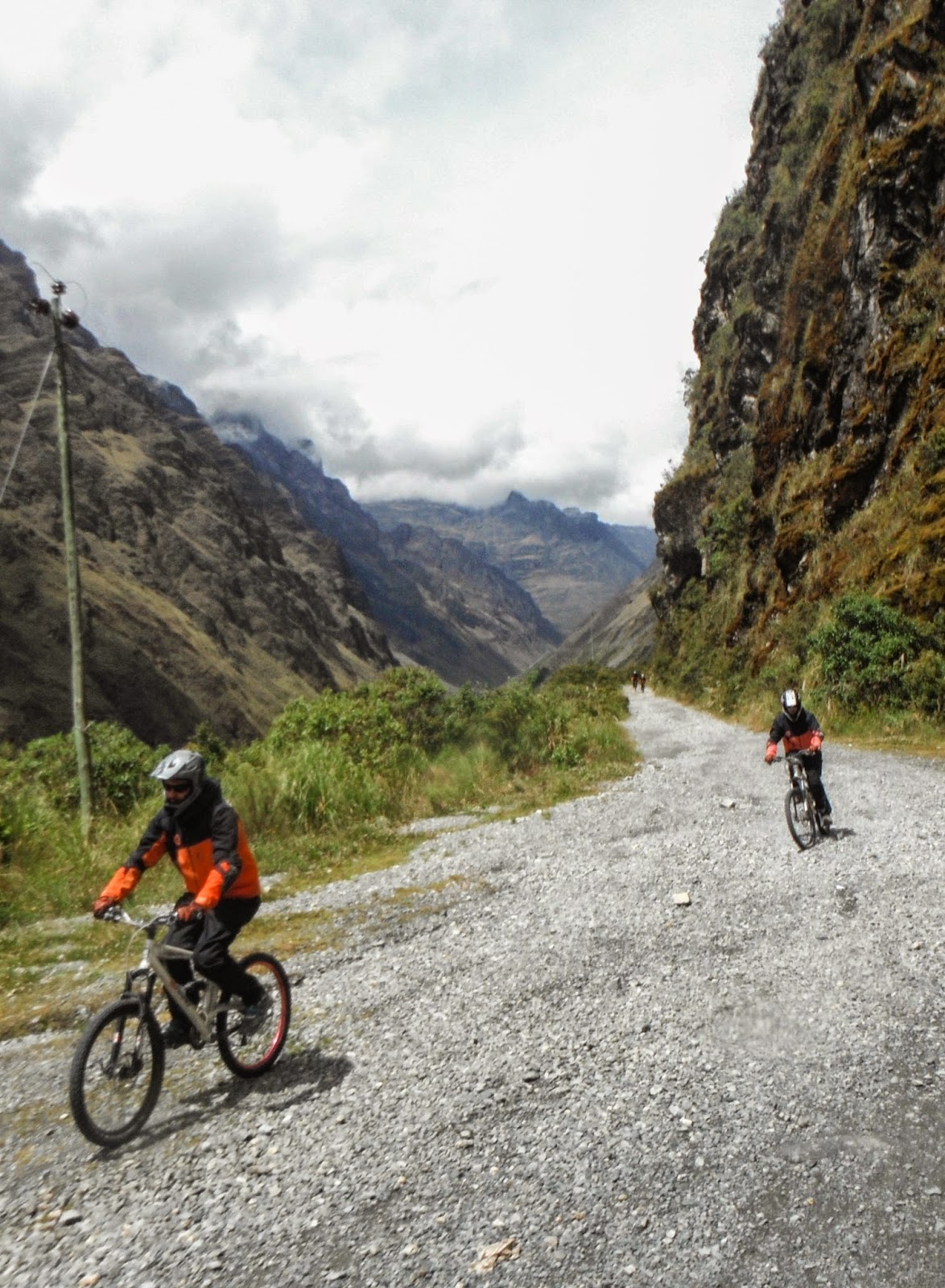 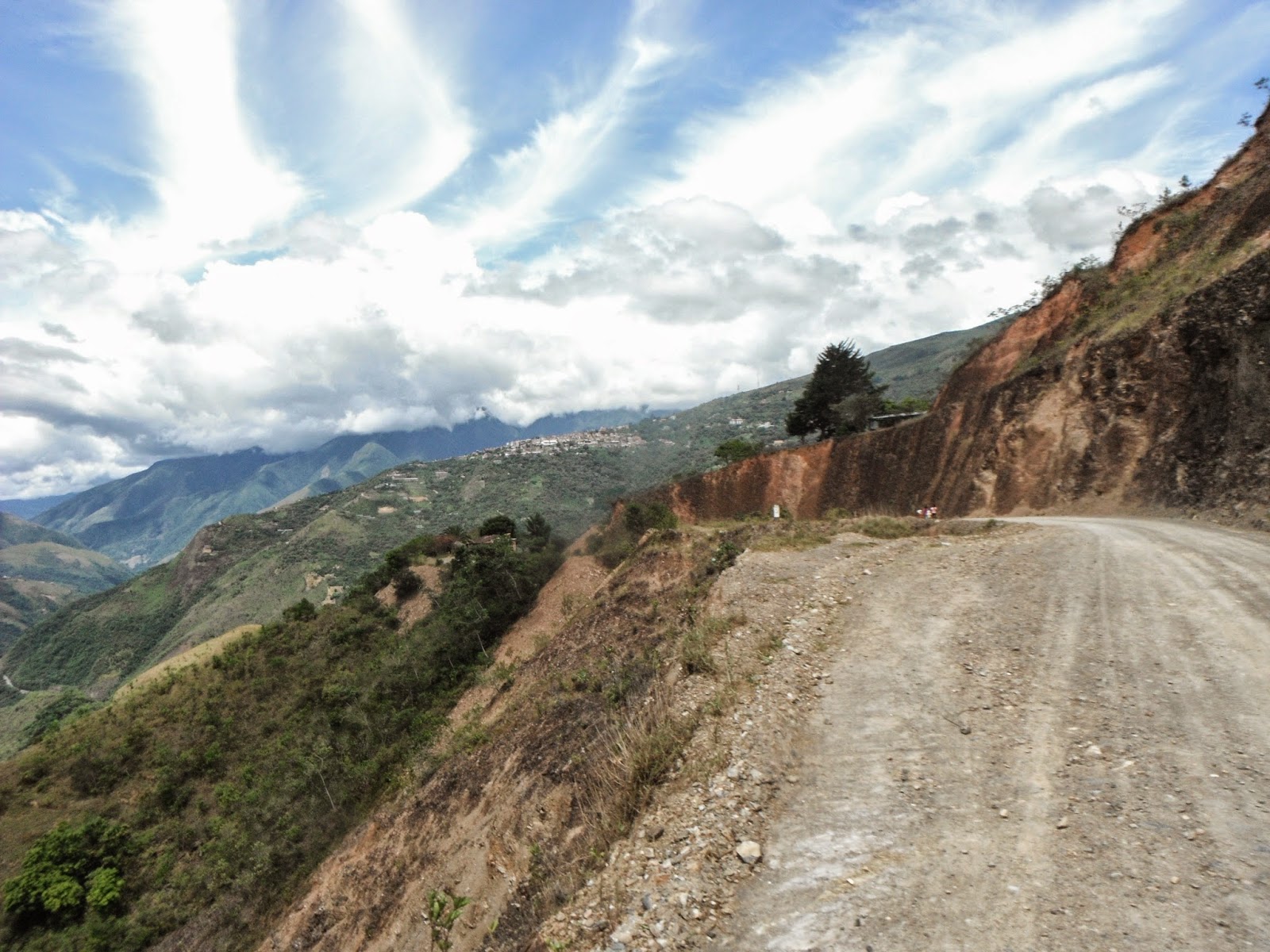 The views went from long vistas to pea-soup fog and back as we rode. During the foggy parts, it was damp, but we were already starting to notice the warmth. It was now cool, not cold, and getting warmer with each foot we dropped. 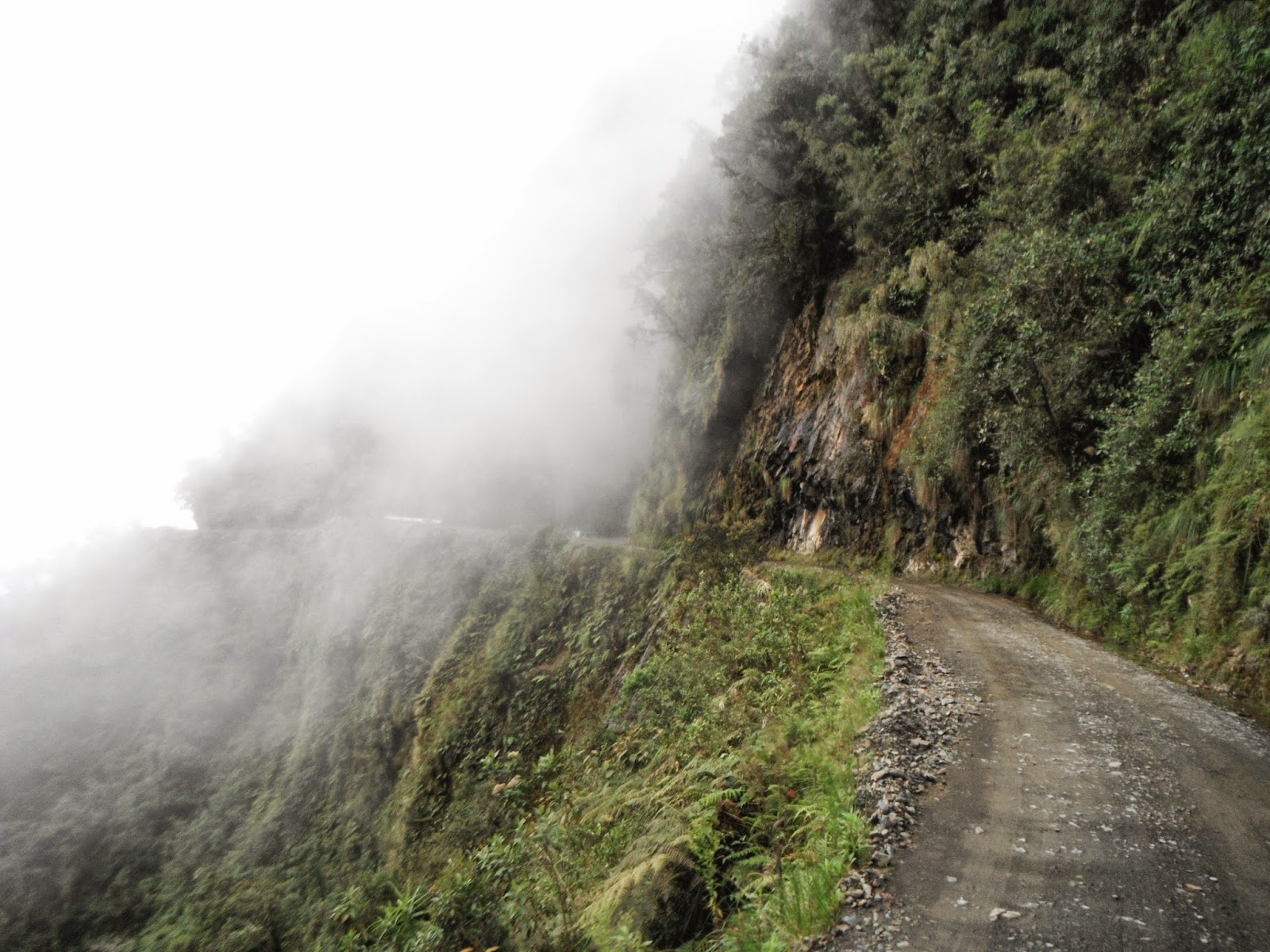 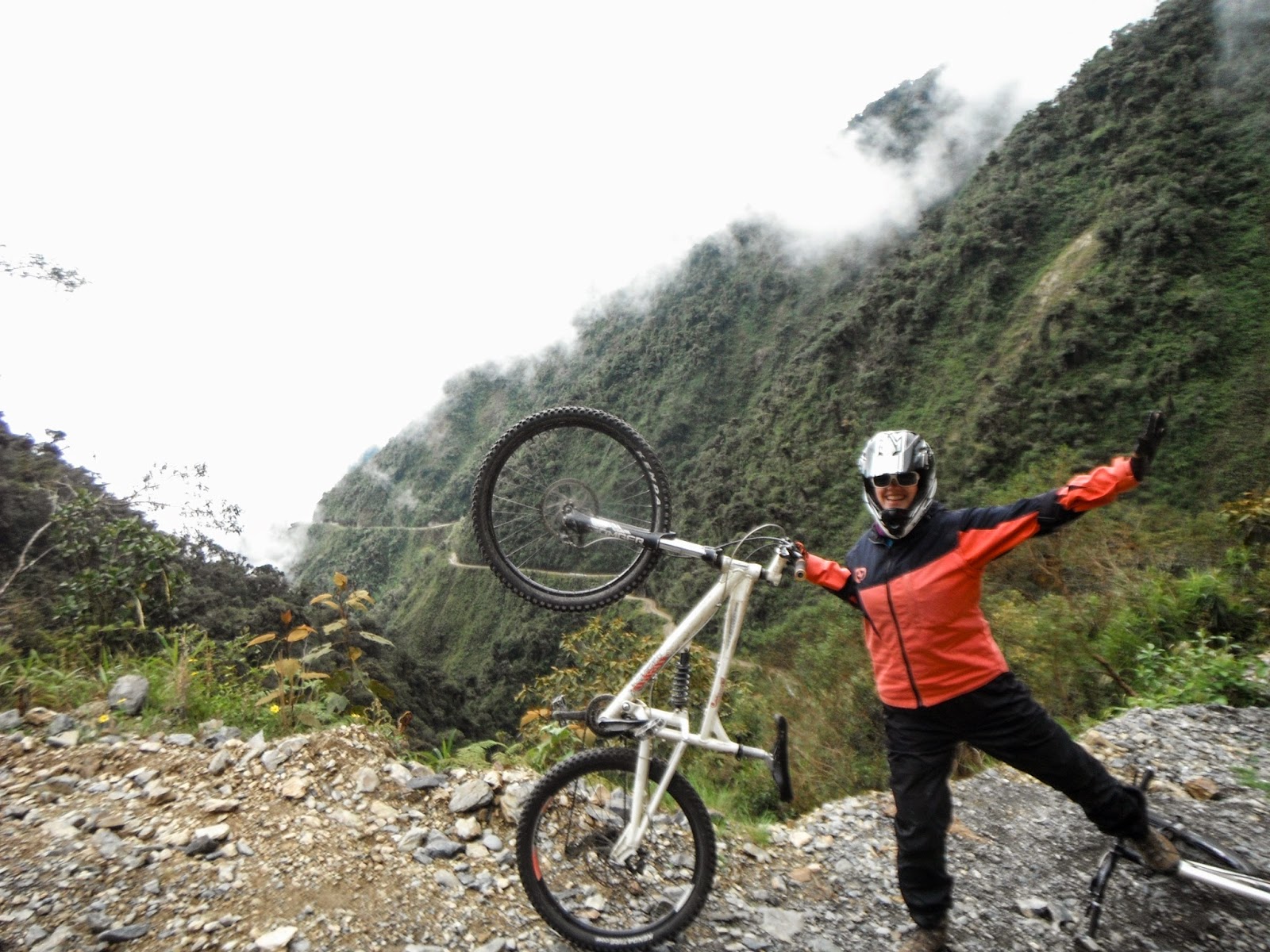 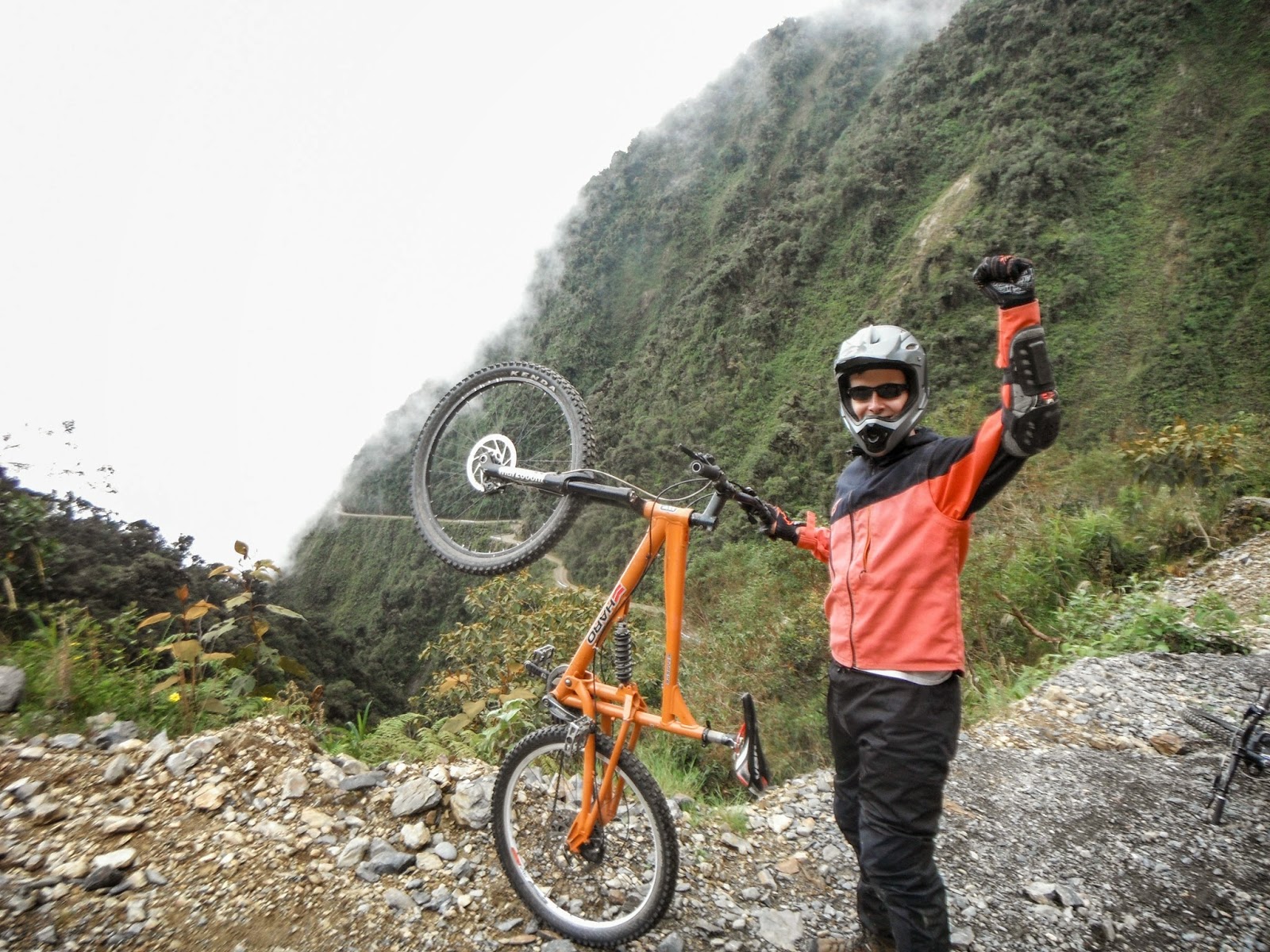 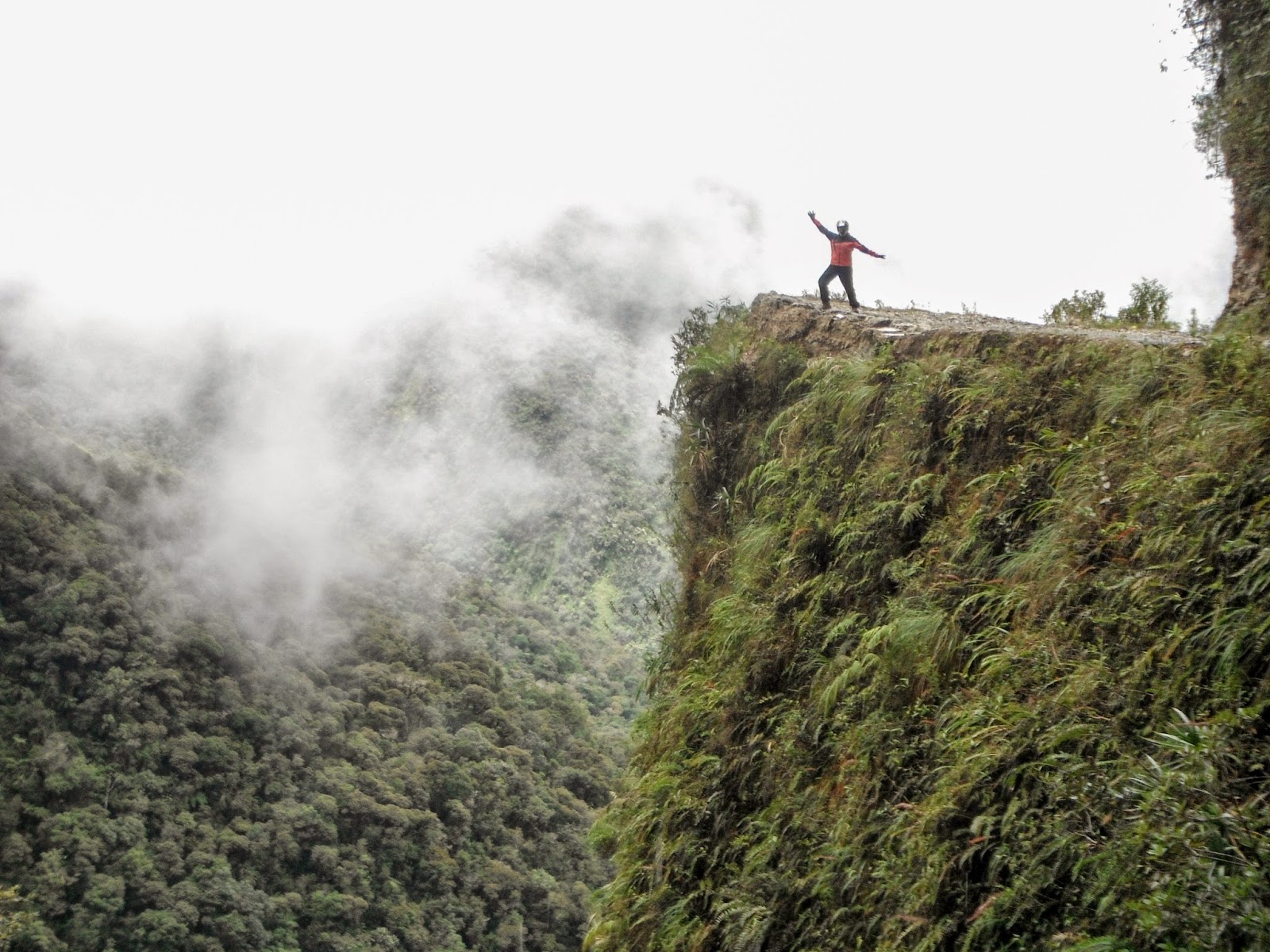 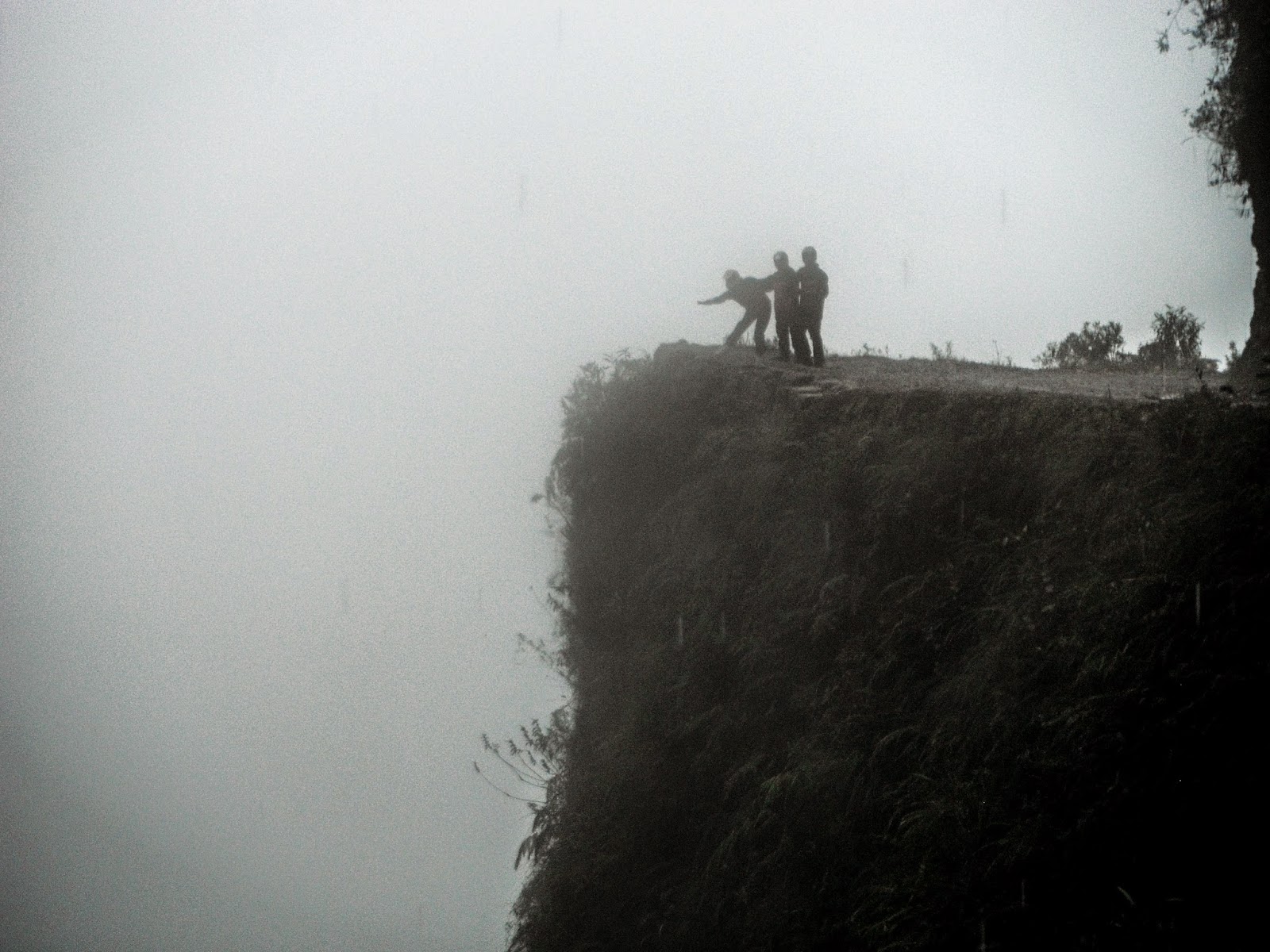 Karen pointed out that she had never biked on gravel in her life. Luckily this wasn't gravel. It was a bunch of stones that were wet, sometimes with an active waterfall hitting the middle of the road. 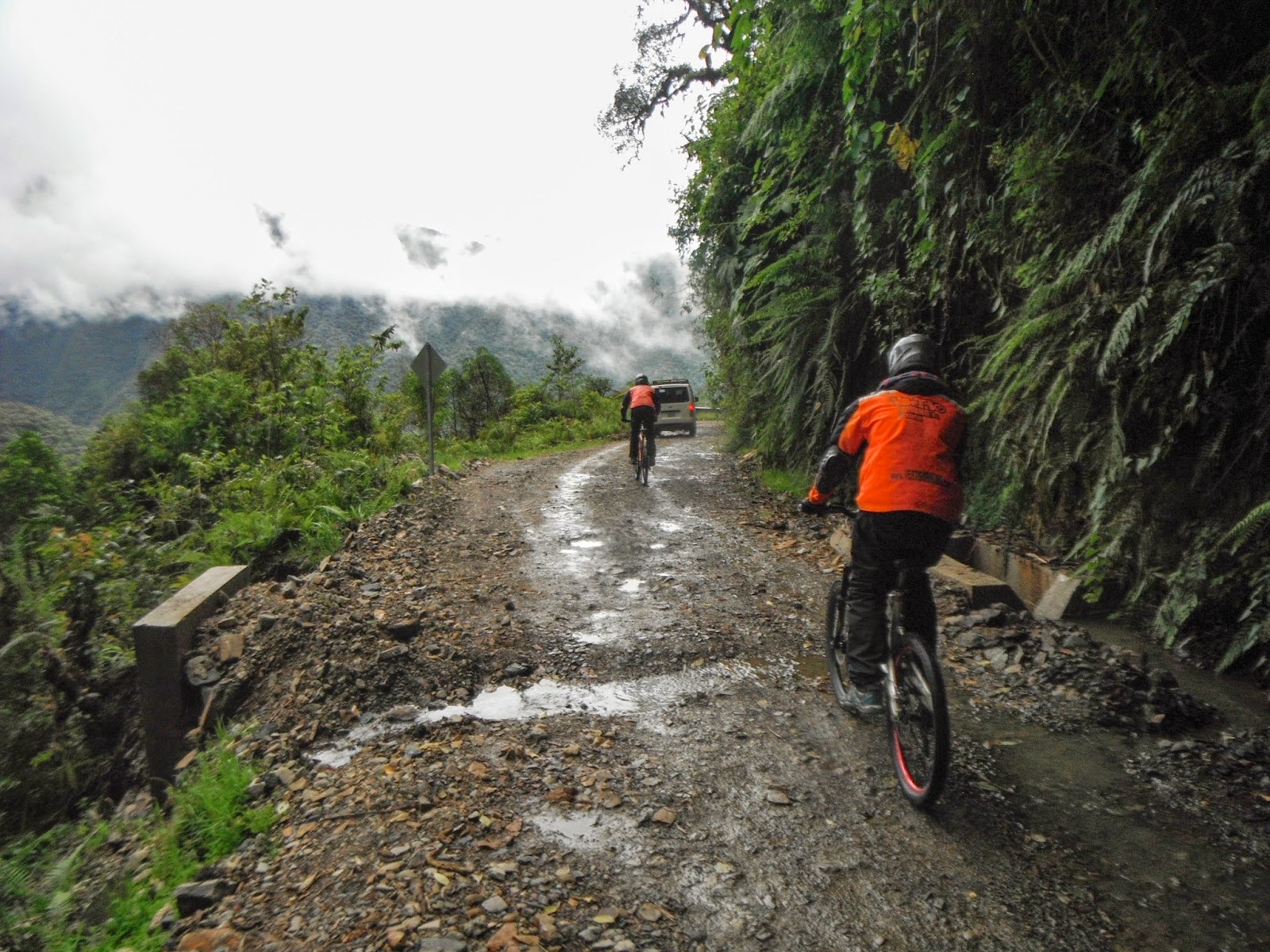 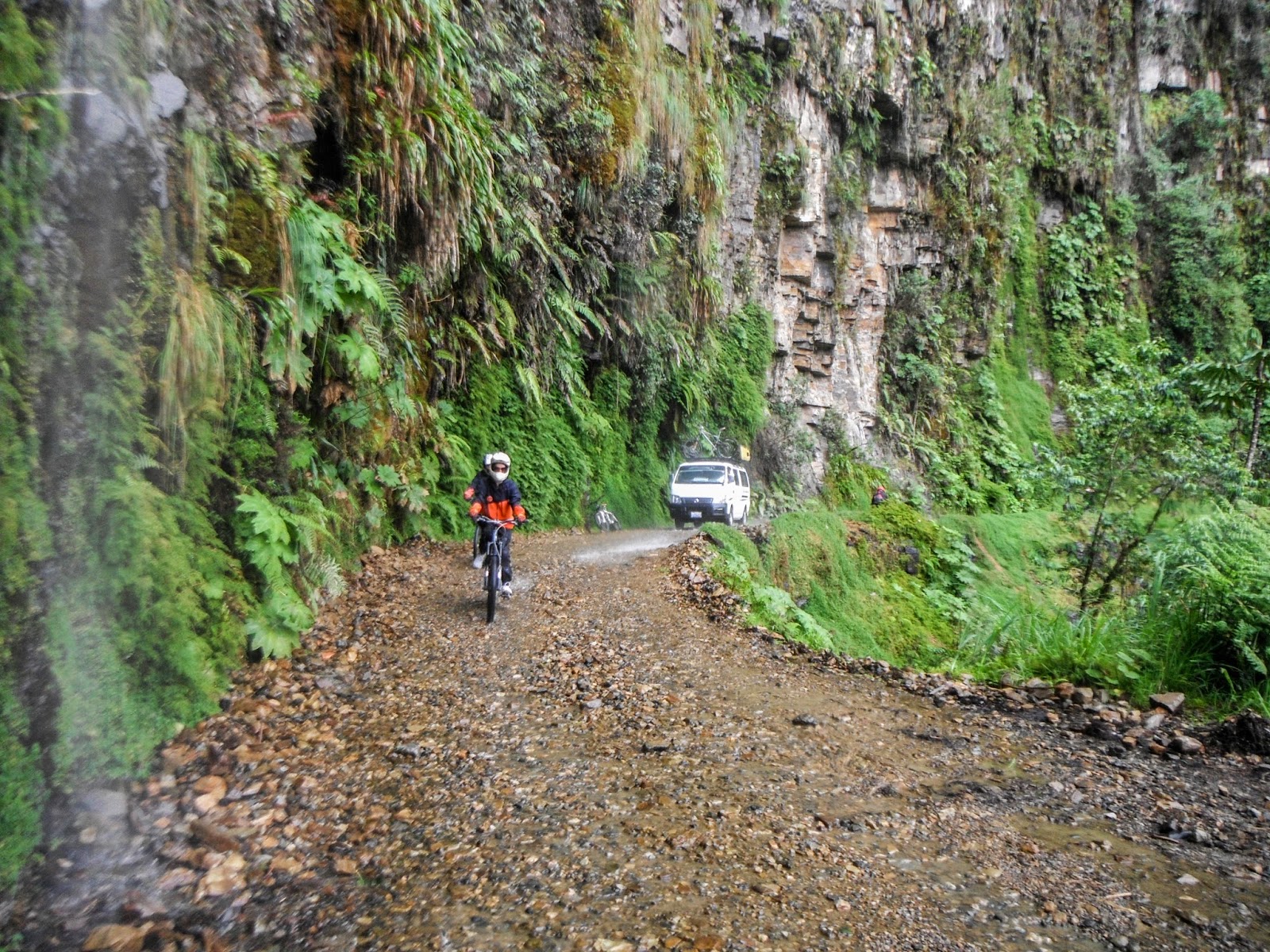 Side note: One thing that sold Karen on joining us was the van that always follows along if you need help, and that the guide is certified for cliff rescue if you go over the side but manage to survive and grab a ledge or a fern on the way down. 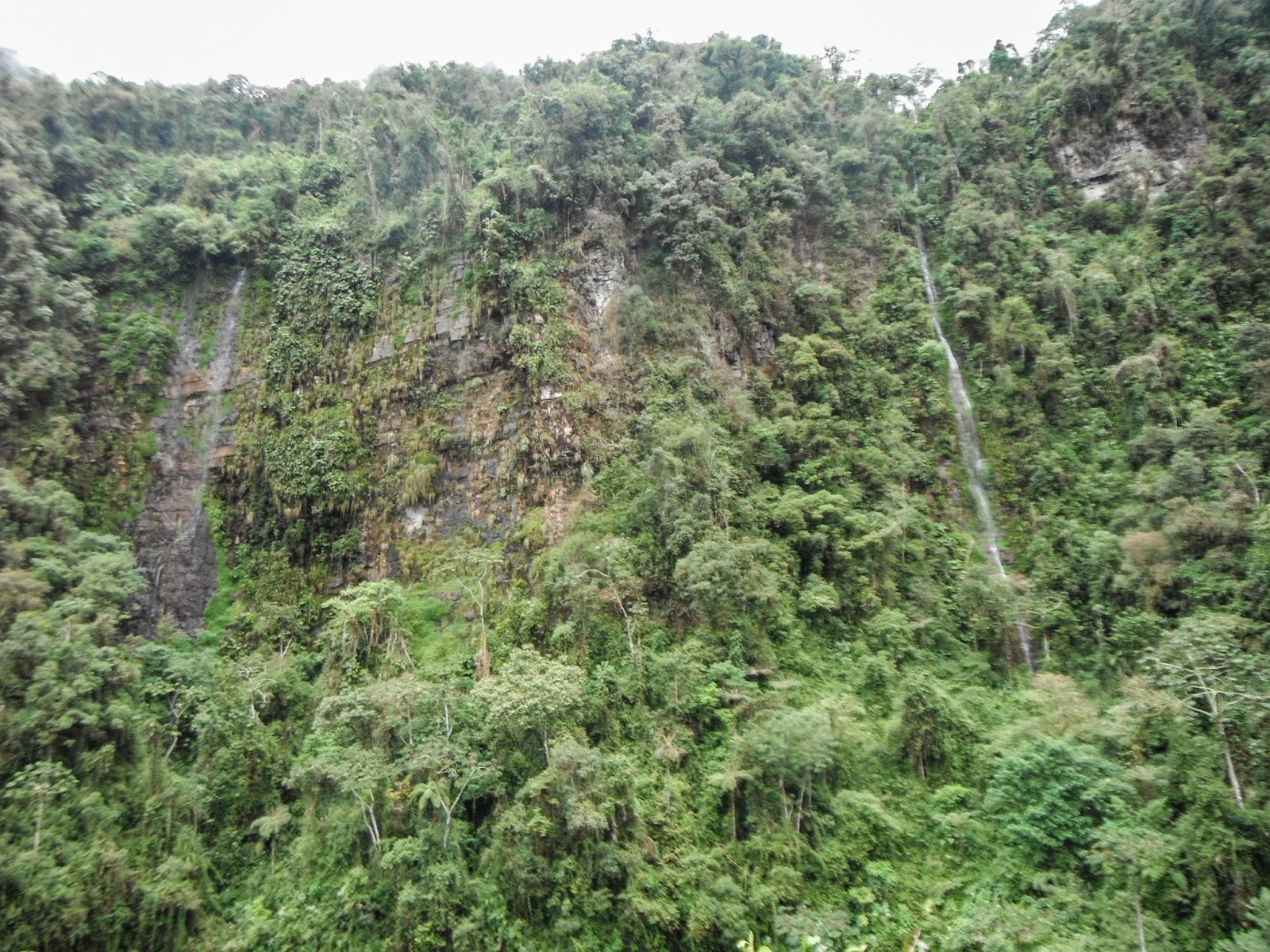 With no side barriers between us and the huge drops, you'd think it would dominate our minds. Nothing takes your mind off the danger 6 feet away like speed, and large wet rocks right in front of you. As you can see, the road was just packed rocks. As you can't really see, some of the rocks were as big as a grapefruit, and needed to be dodged. 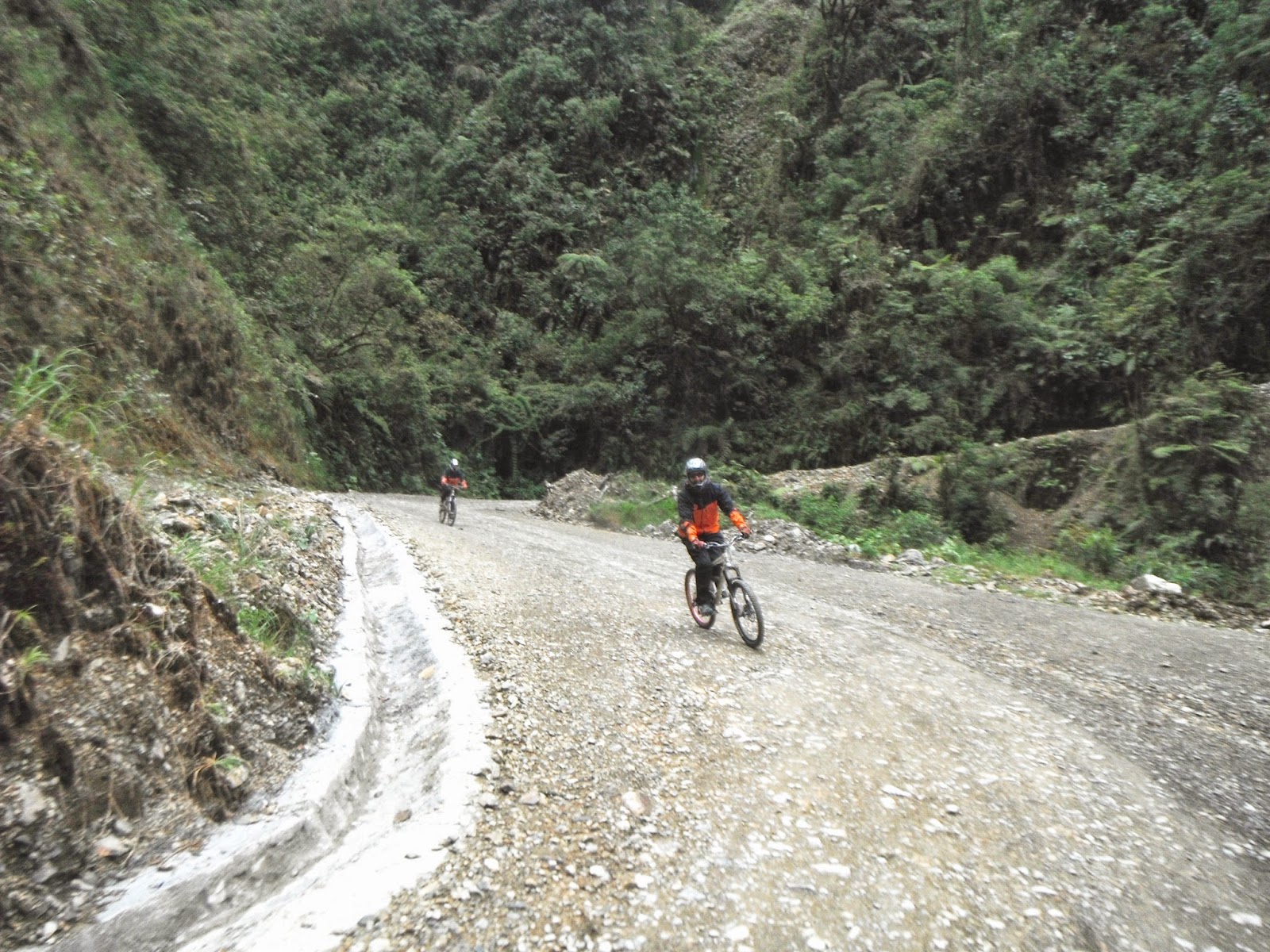 The trip was split up into legs. The guide would give us advice on the next 10 or 15 min of biking (watch out for the waterfall, stay inside on some of the turns since they're steep, watch out for lazy dogs and crazy chickens) and we'd regroup after that. One of the stops had a little pavilion where we snacked and the guide checked our bikes. Apparently the massive change in altitude affects the brakes, and he likes to adjust them. 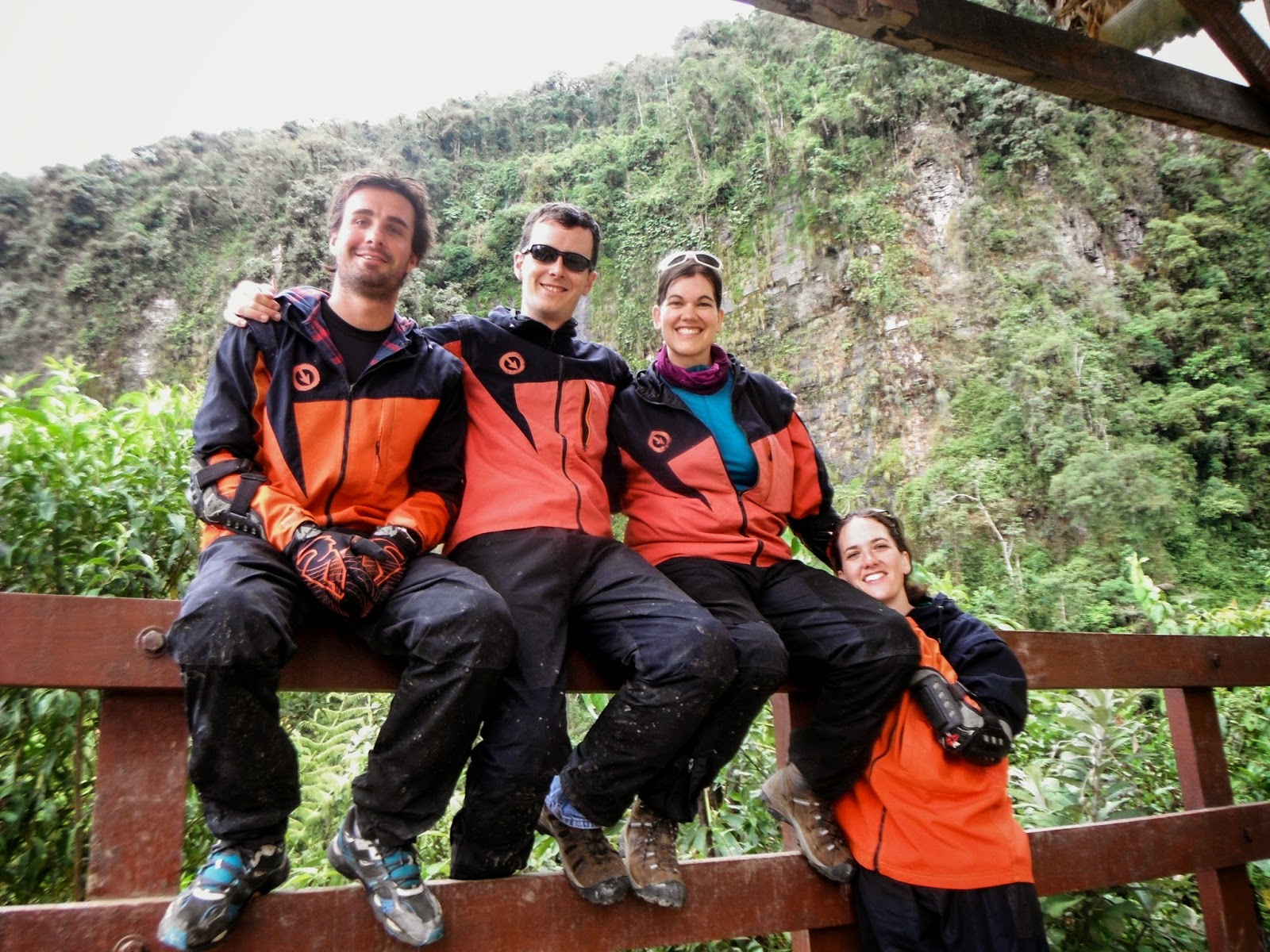 For this picture, Karen had determined that she had already met her fill of excitement for the day and was not risking climbing up on a tall fence to pose for a photo.


By this point, we were low enough it was getting hot. We took off our raincoats/wind breakers leaving only the safety pads. Setting off on the final push, we turned off the normal road and took a side road to our lunch destination. 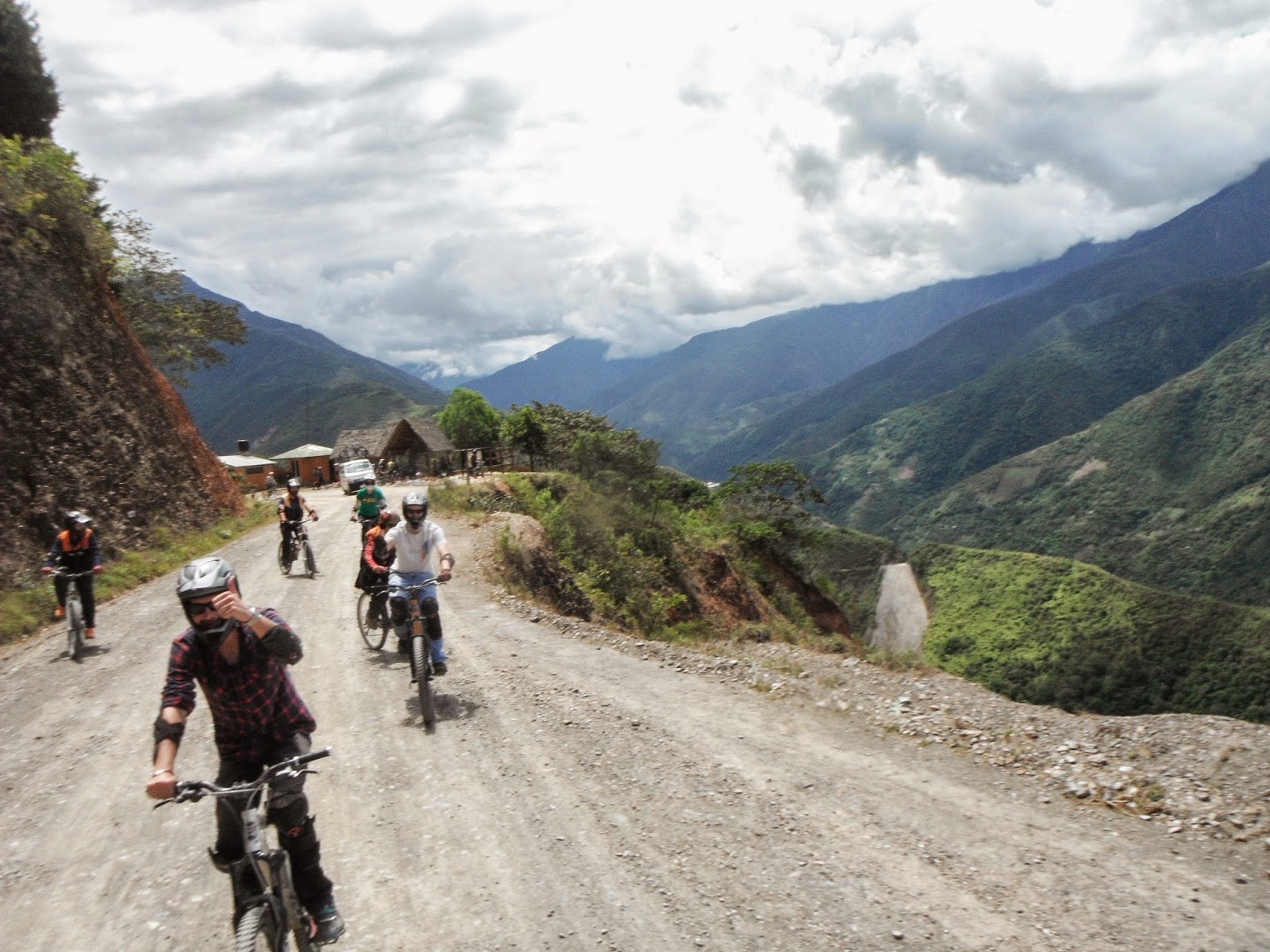 This last side road was thinner, and much less smooth. Bigger rocks, bigger troughs eroded by the rain, and lots more vegetation. 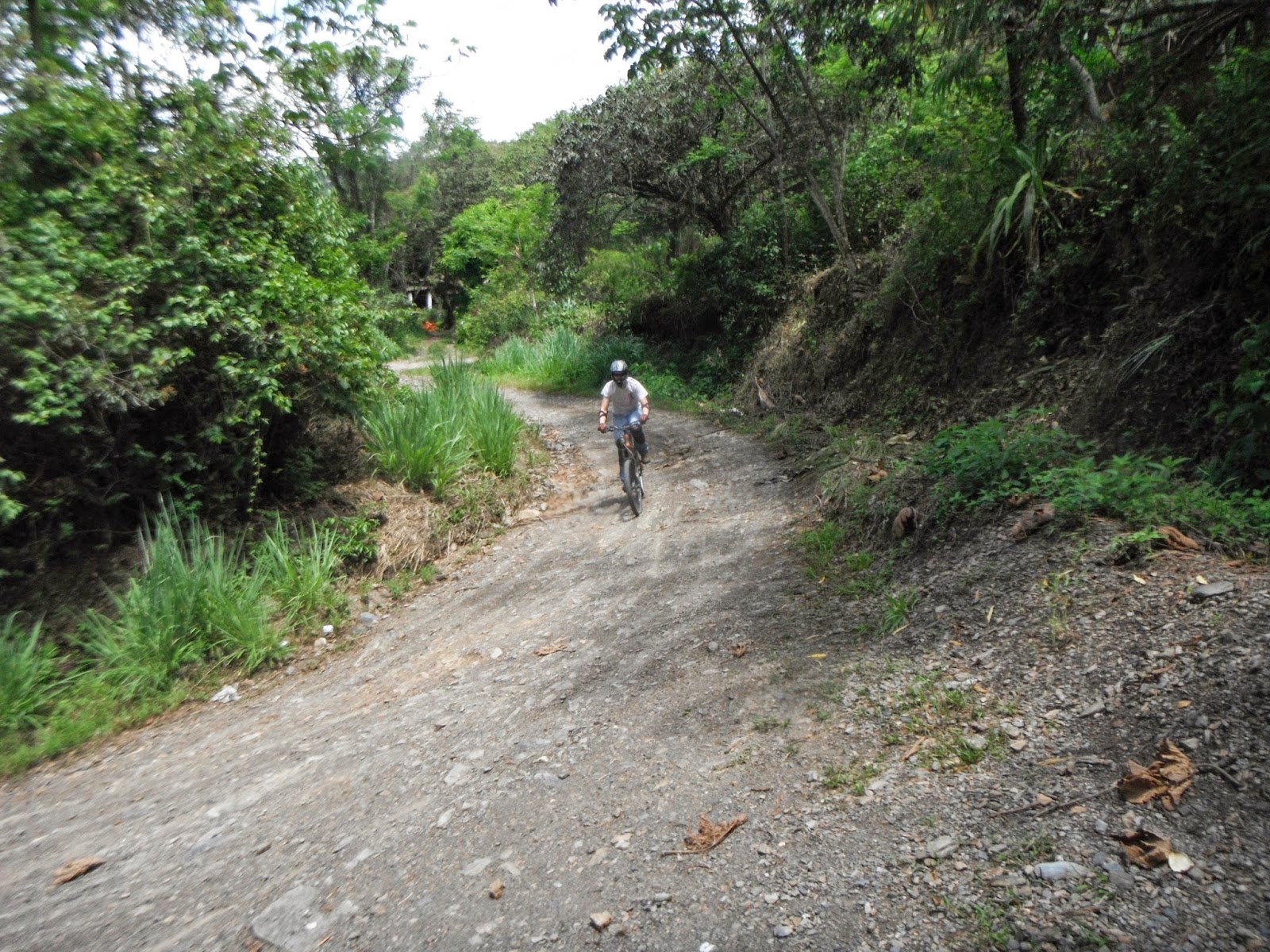 Karen came into her own on this last bit, letting off the brakes, gaining speed and weaving for the most solid path. 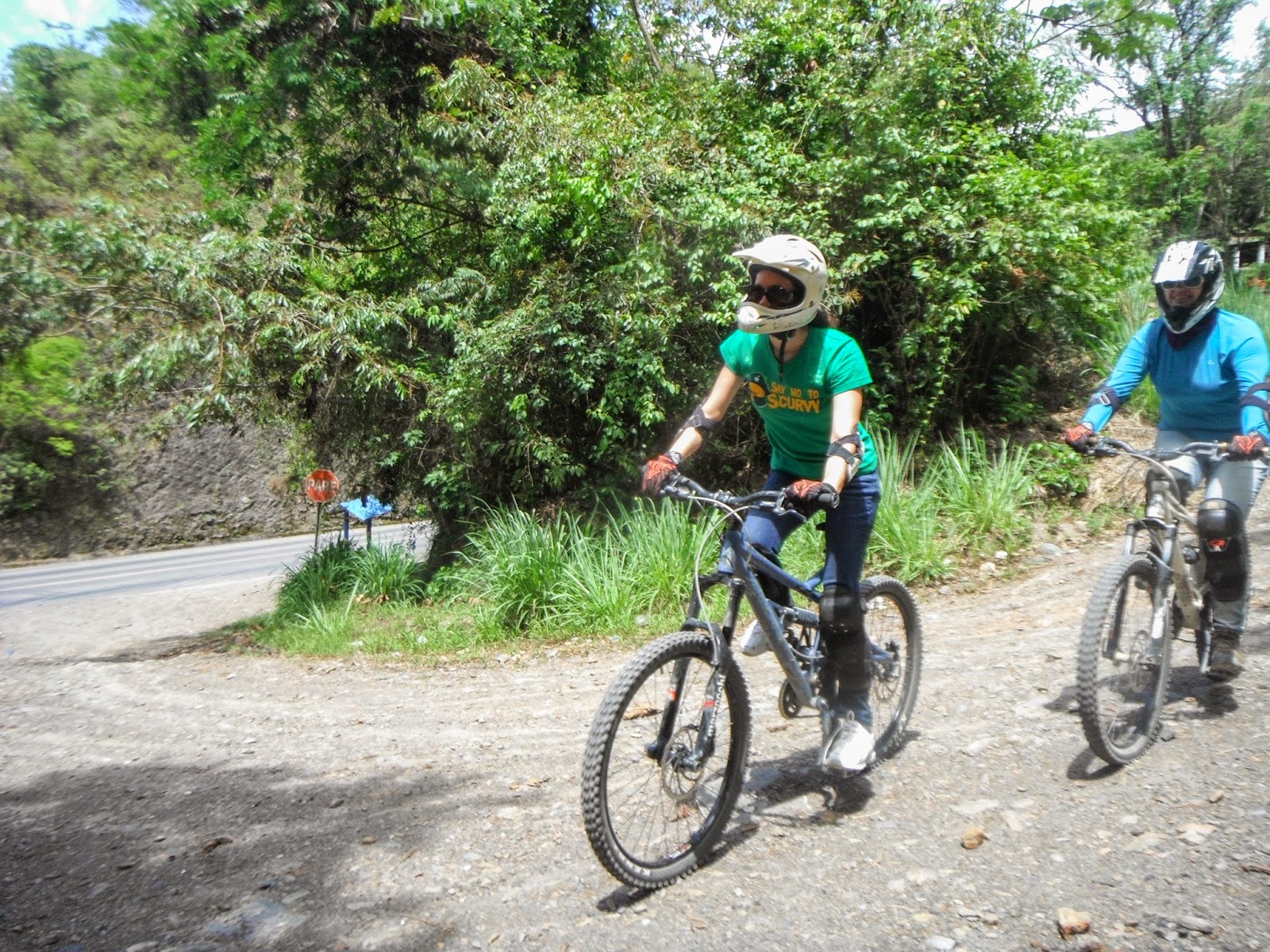 Finally being finished, Karen started to come down from the adrenaline that had kept her performing, and said "Colleen, for the first time in my life I know what people mean when they say 'I need a drink'" 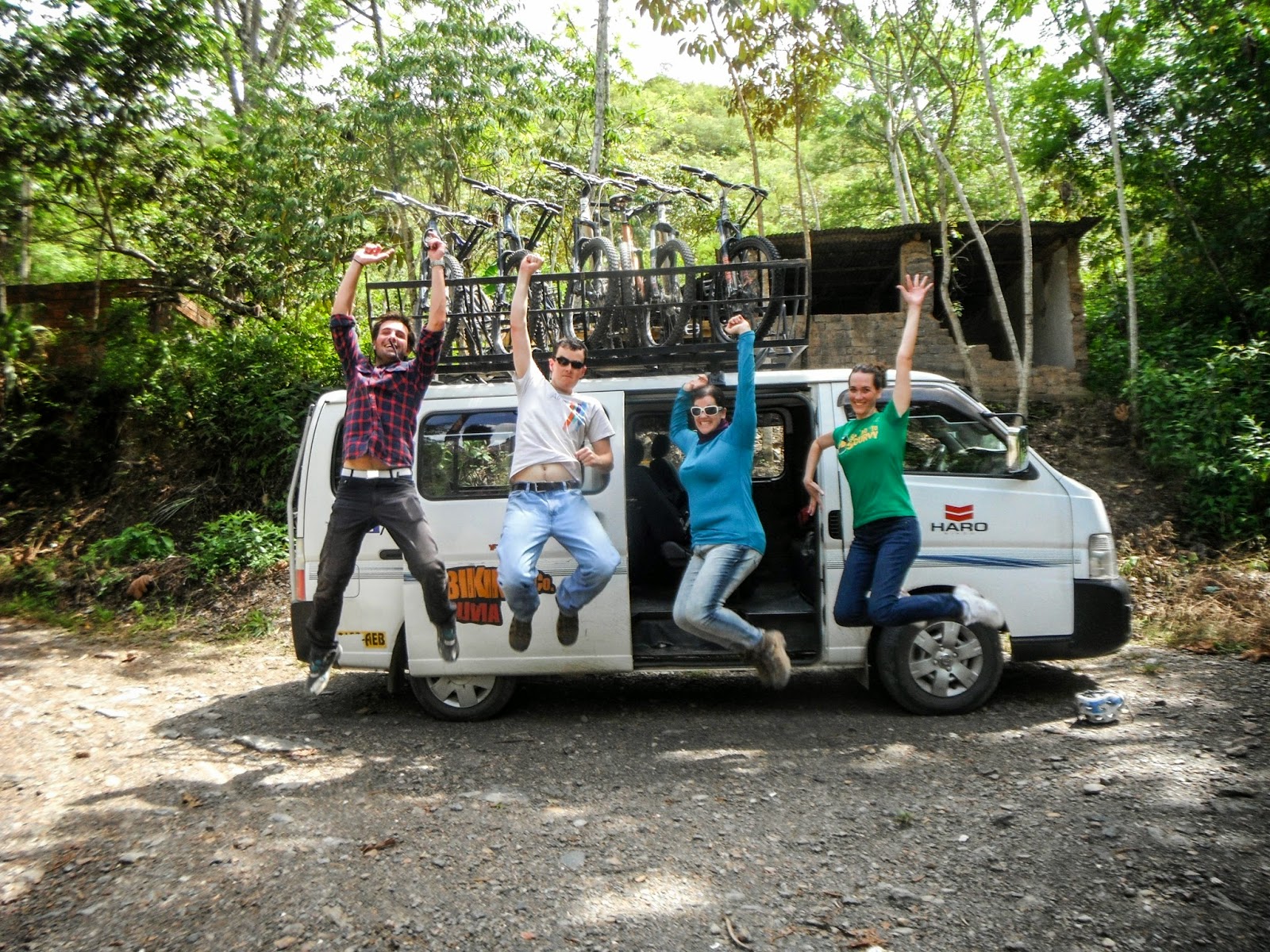 Posted by Colleen Speed at 5:12 PM