You know what is awesome? Dinosaur footprints.  Why? Because dinosaurs are awesome. 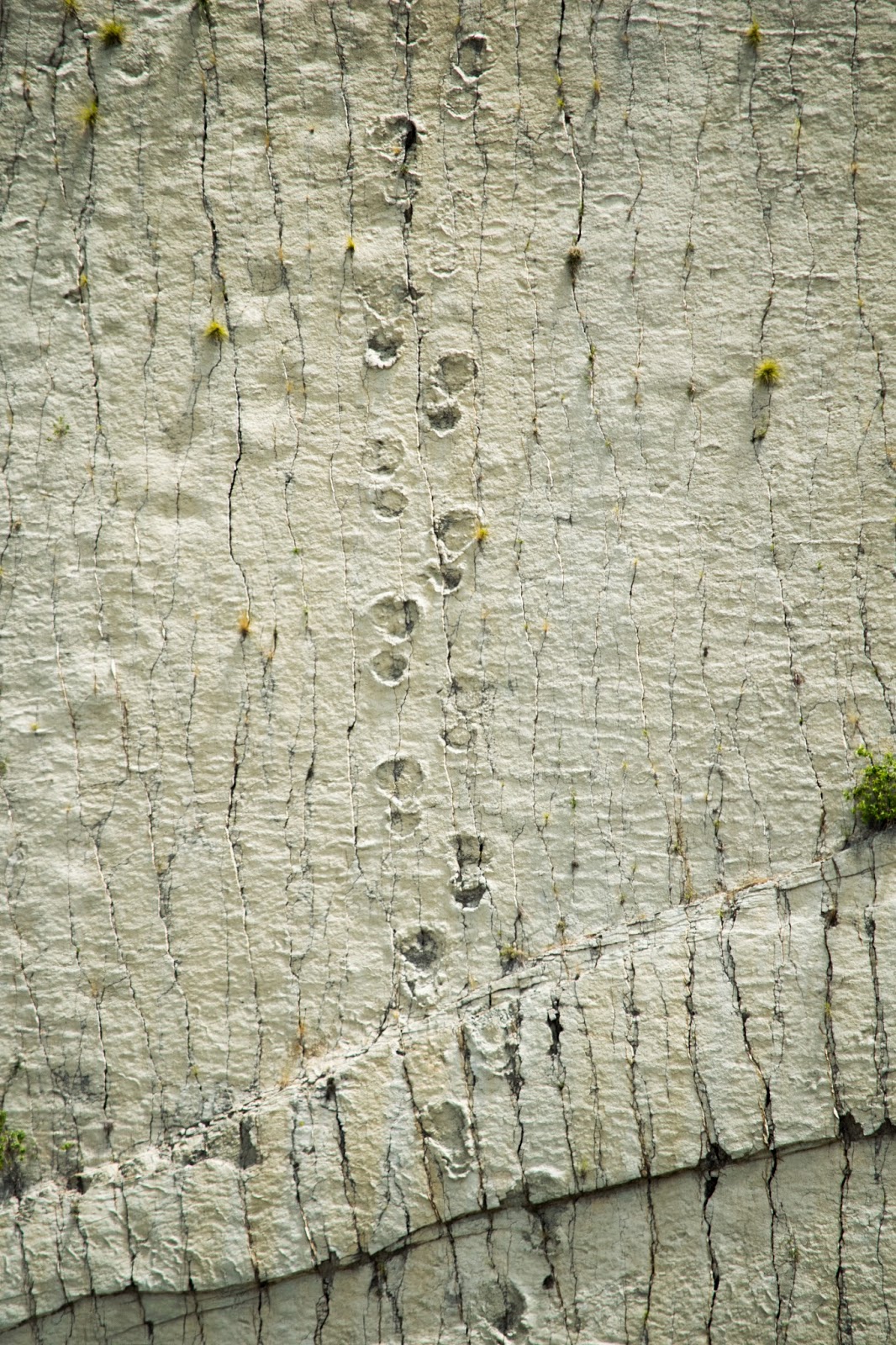 We got up early for our simple 10 kilometer hike with Condor Trekkers. After some breakfast (and borrowed hats from our hosts), we took the bus into the town square to meet the group. 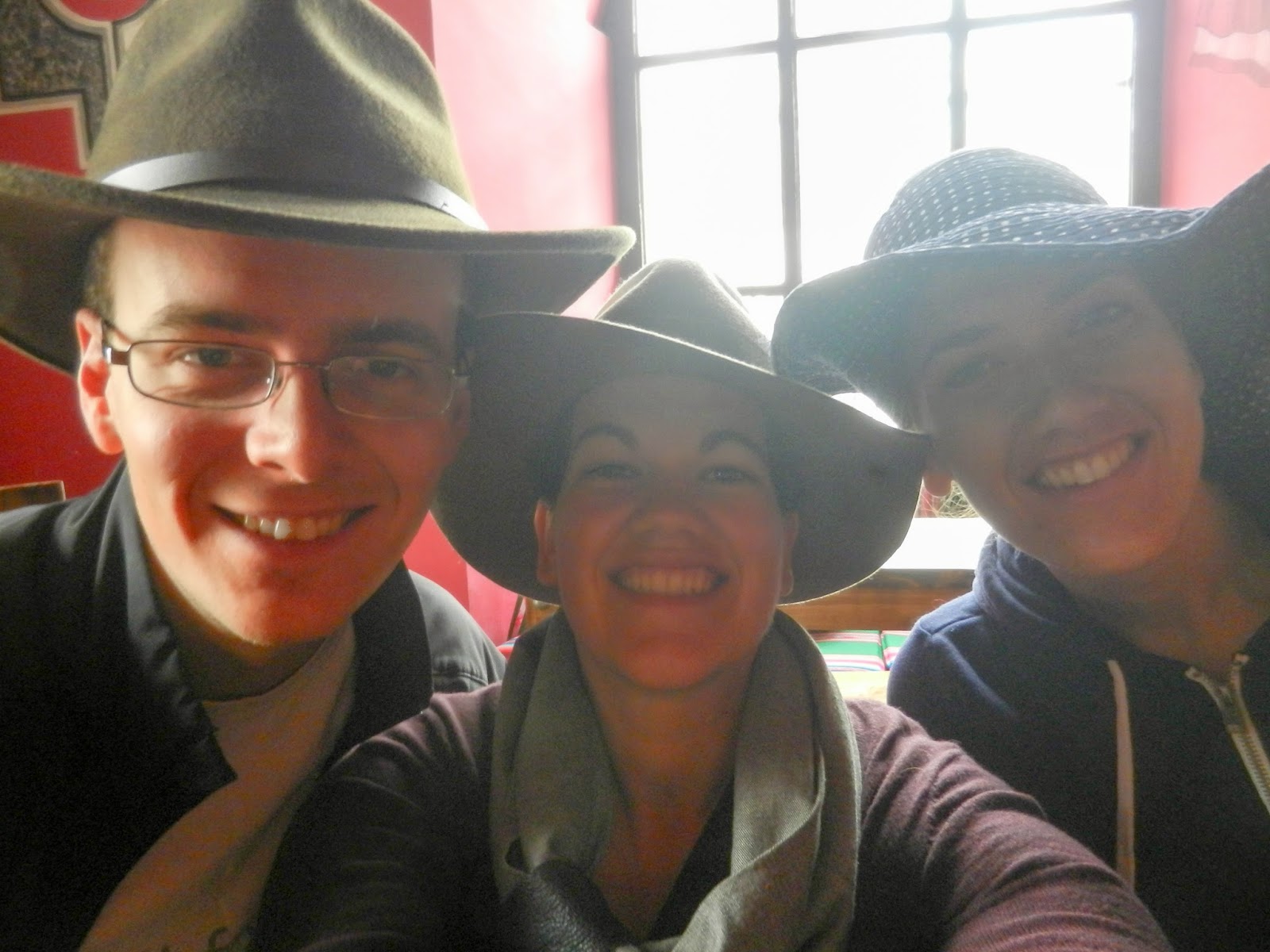 Traffic in Sucre (and the rest of Bolivia) doesn't like to obey stoplights, so there are people dressed as zebras who's job it is to block traffic so tourists don't get run over. 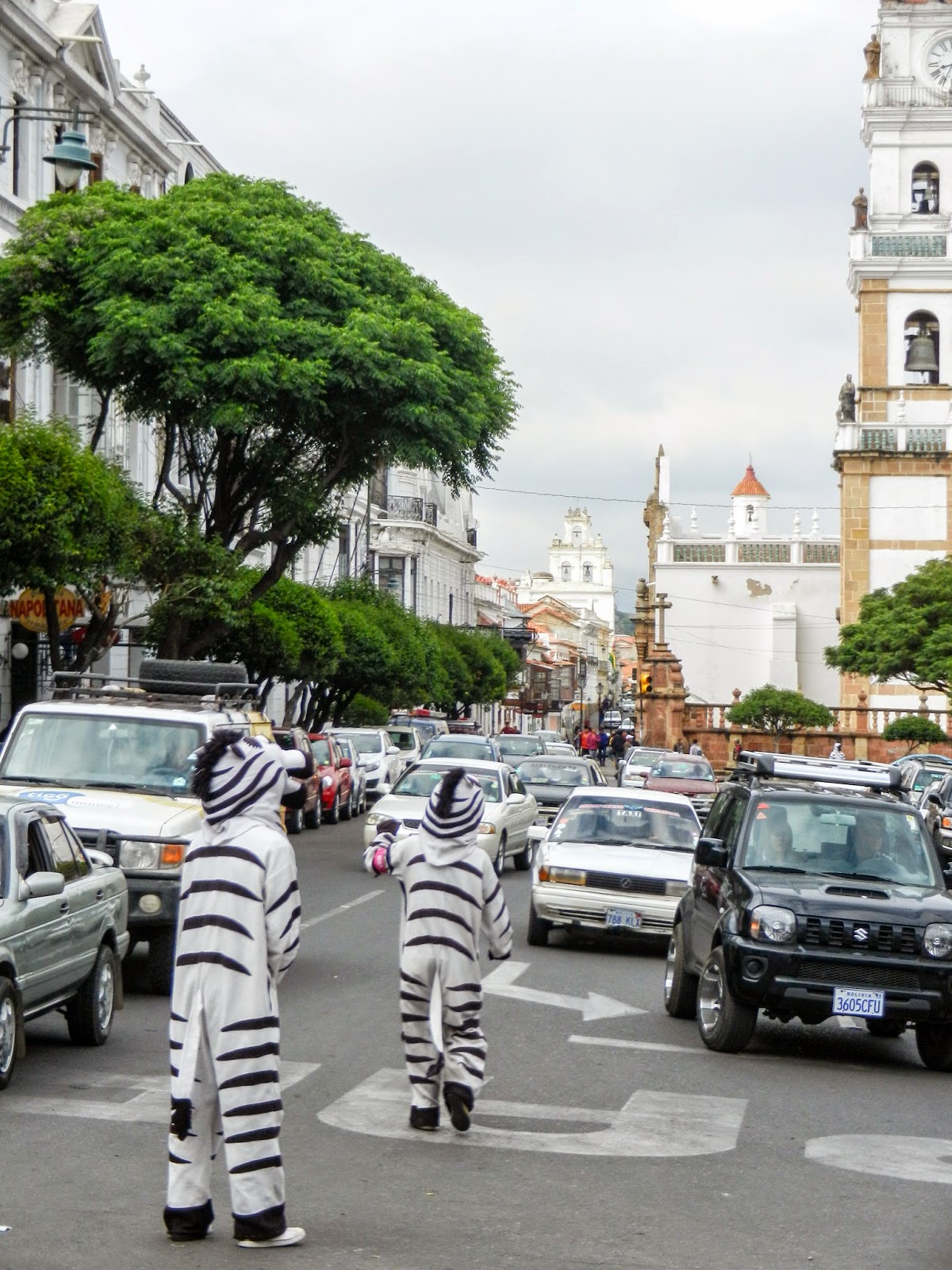 The first part of our tour was a bus ride to the edge of the city to Parque Cretácico, a museum/park where dinosaur footprints can be viewed.   Looking back towards the Sucre we had nice view of the valley and the mountains nearby. 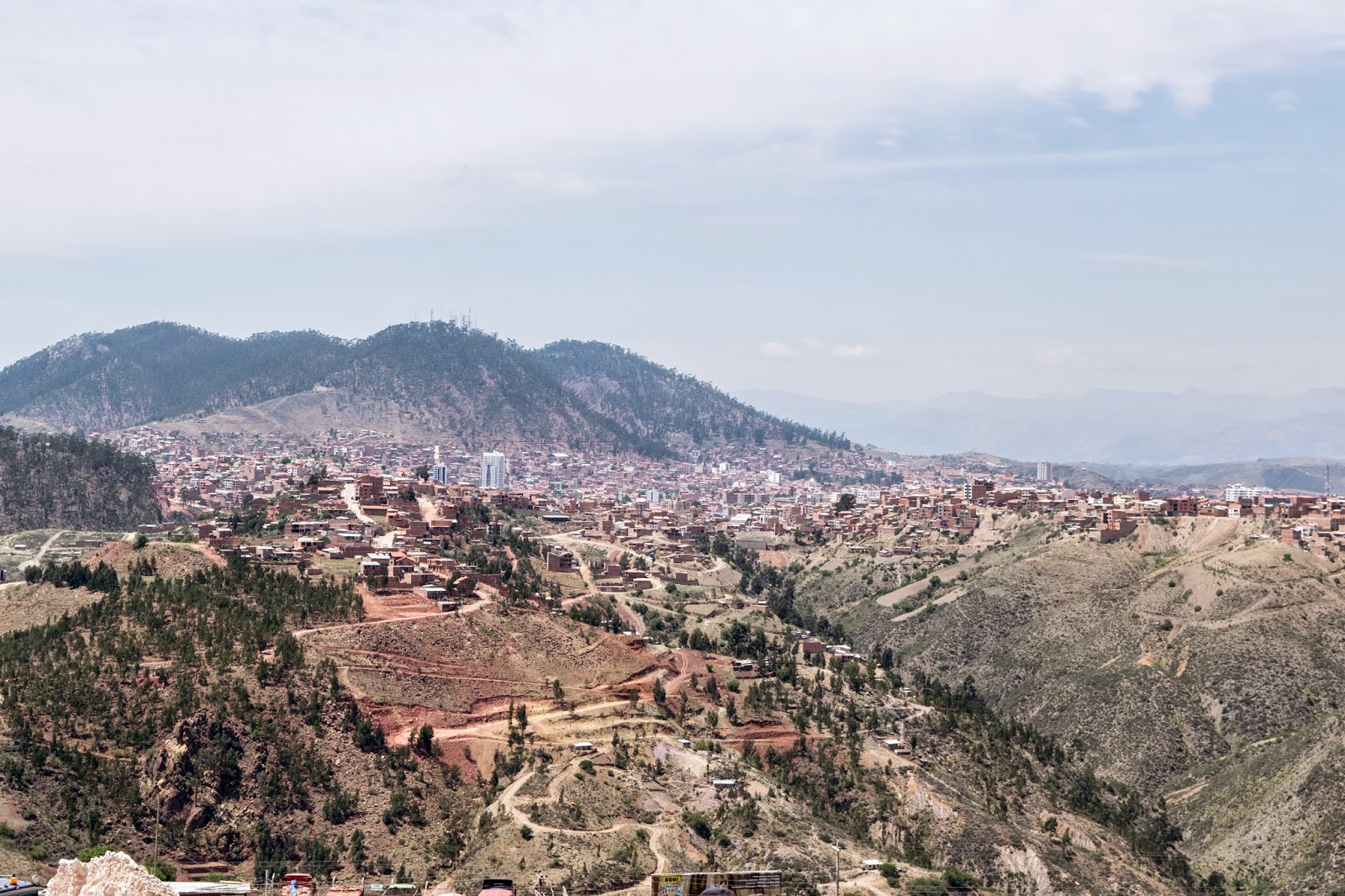 The museum was built beside a still active cement-quarry-turned-archeological-site. While strip mining down the side of a mountain, they found fossils of dinosaur foot prints on the wall. At first glance it looks as if the dinosaur somehow defied gravity and managed to walk straight up a 90 degree cliff. 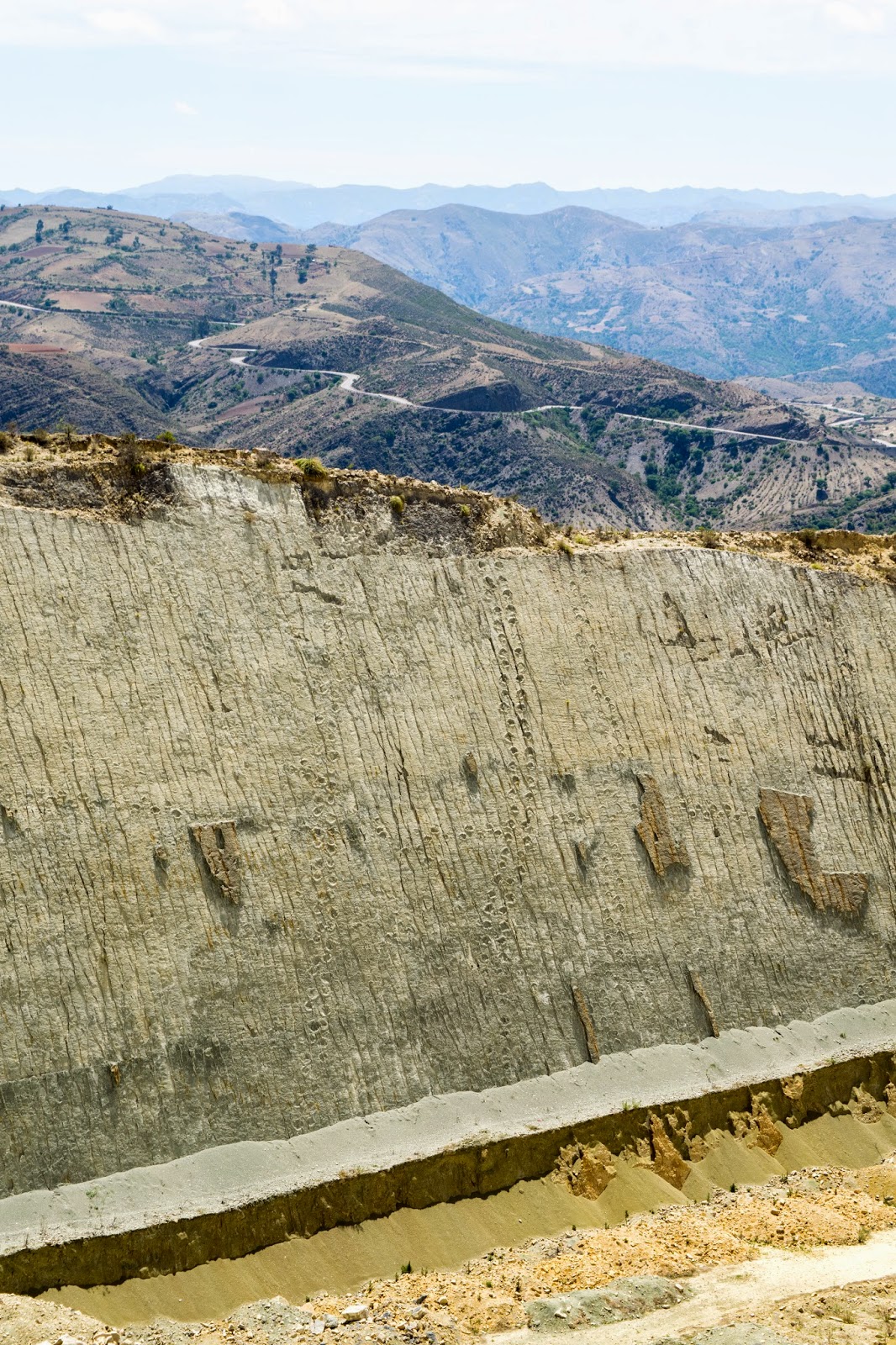 In reality, Bolivia 58 million years ago was a vastly different place. It had shore line for one. 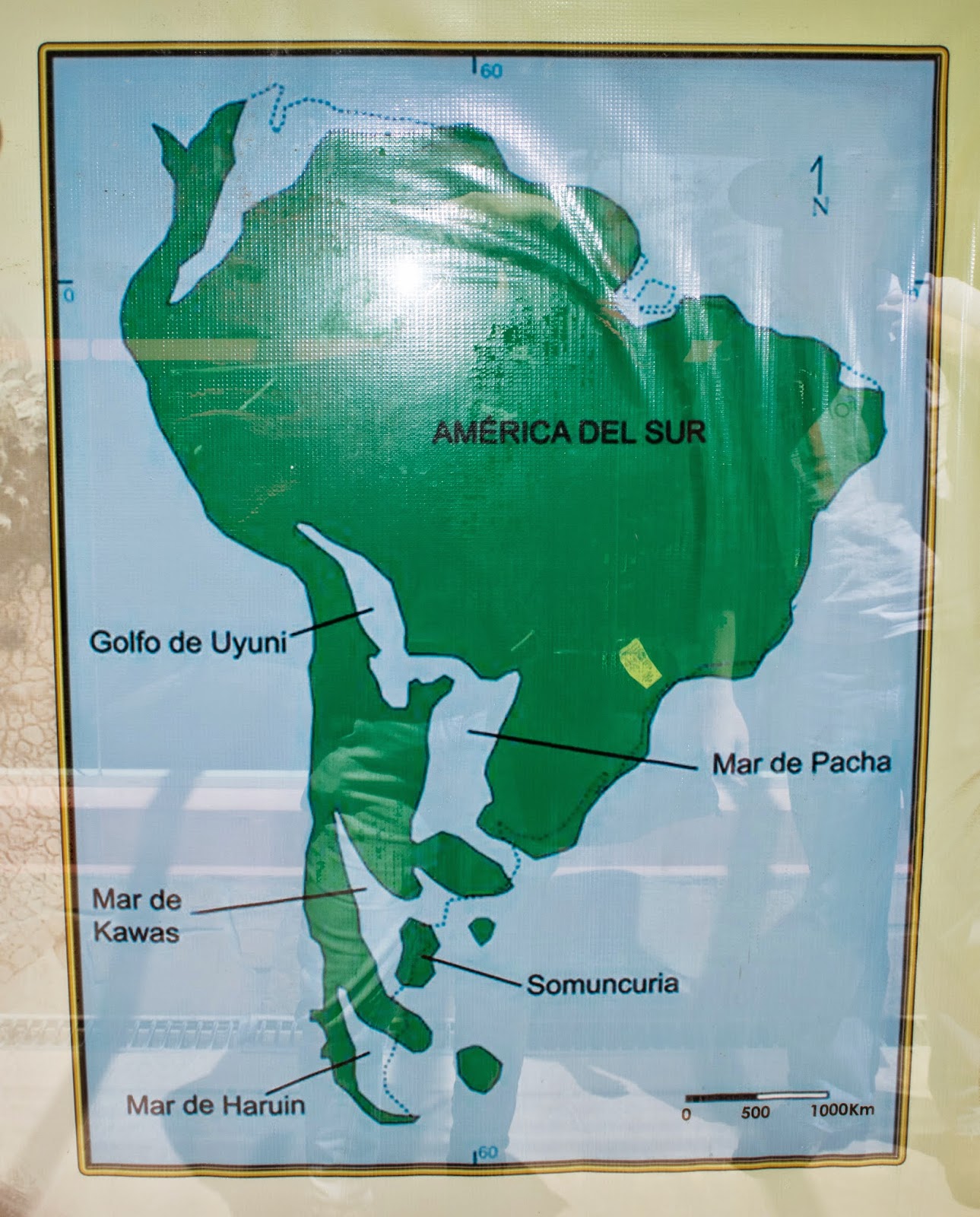 And dinosaurs stomping around on the beach made a bunch of foot prints, which were preserved by a volcanic eruption. We learned all this in the most violently graphic video retelling of how dinosaurs lived, hunted, and died. Bolivia really doesn't sugar coat reality from children. 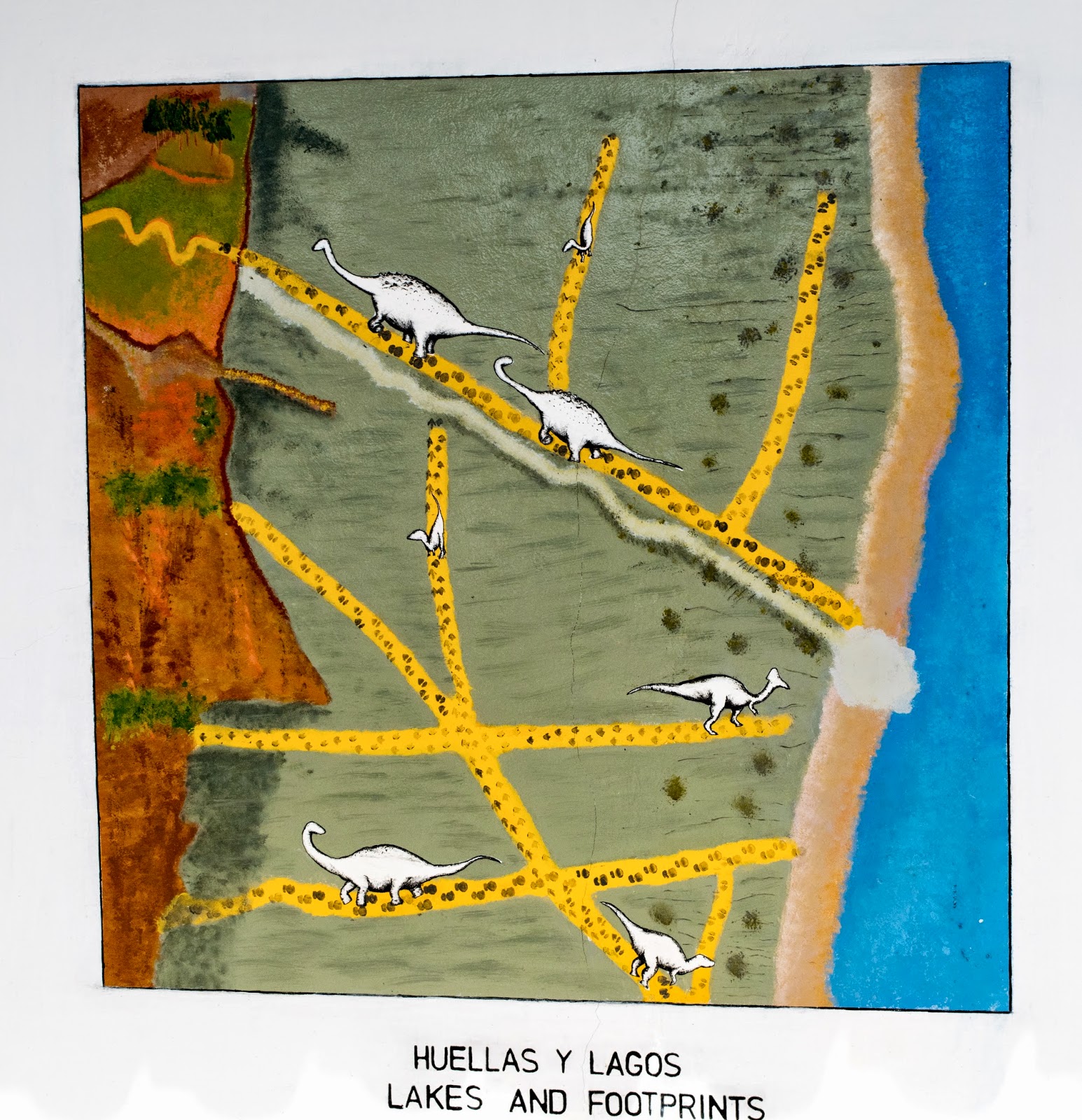 Turns out, 58 million years is a super long time and the ground doesn't stay still. With some nice robust geologic upheaval, what use to be a beach is now is 90 degrees from the ground, giving the appearance that the dinosaurs walked straight up a wall. 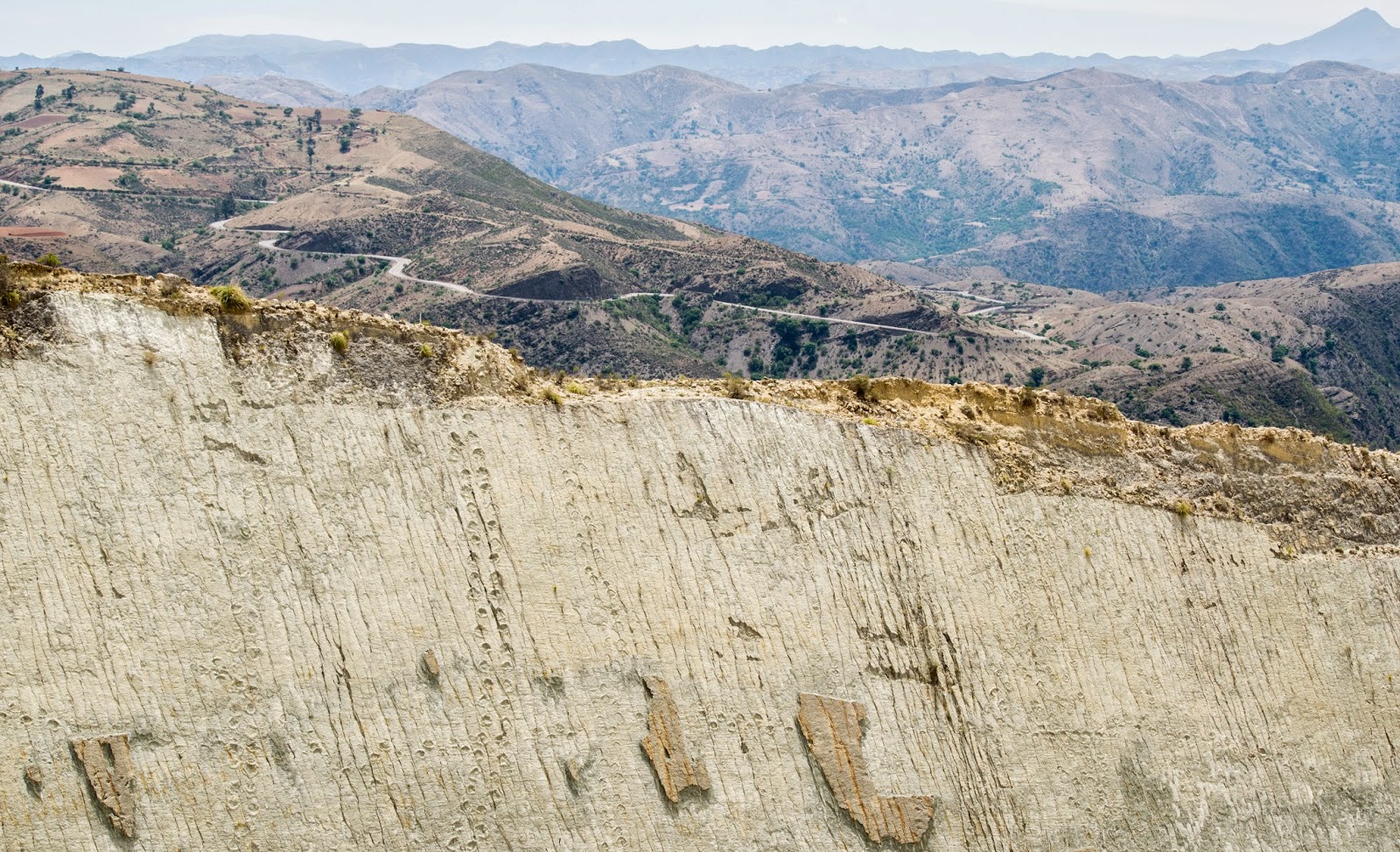 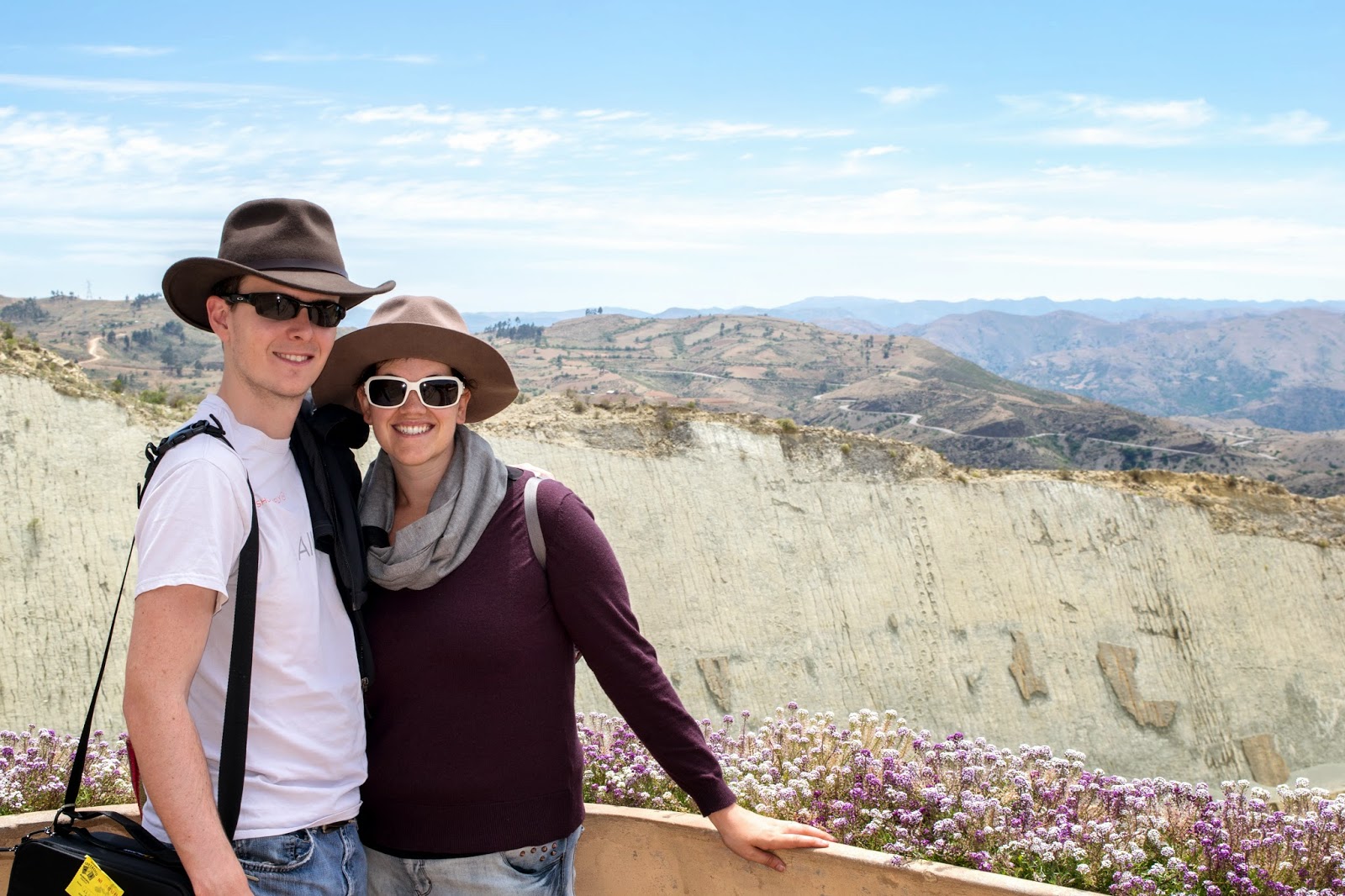 The limestone wall containing all the fossils is now a preserve, but the mine still operates nearby. At noon, however, the miners stop for lunch, and the patrons of the museum are led down to the wall to touch the footprints. Unfortunately, we were there too early, so we explored the life-size dinosaur models and exhibits. 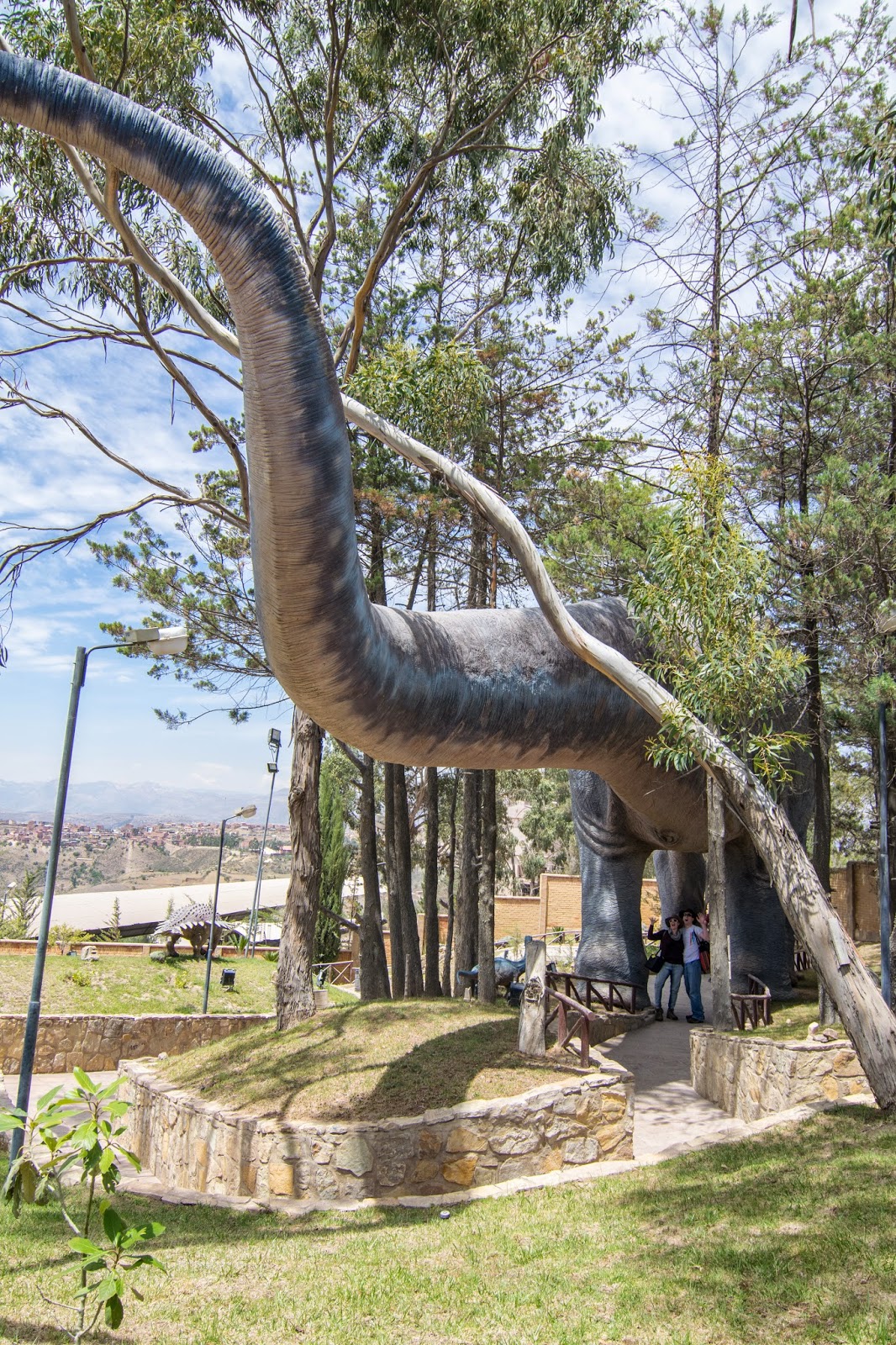 After finishing our wanderings, we shouldered our bags and started our 10 kilometer hike to the waterfalls. Steve and I regularly do 12-14 kilometer hikes up mountains in California. This'll be easy... 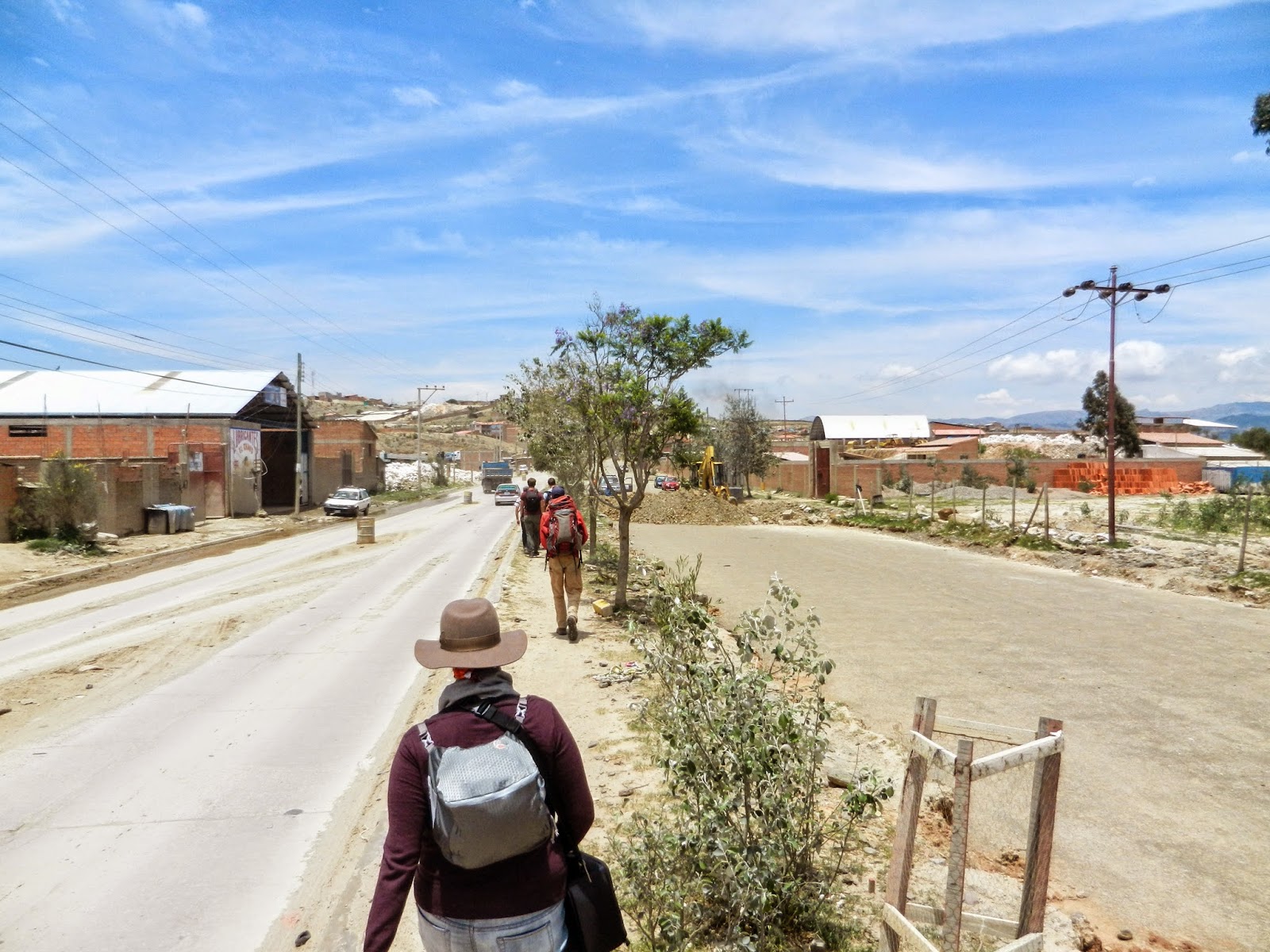