On Top of the World. Mostly.

Waking up sore from the hike, we caught a cab to the airport to leave Sucre and flew to our next destination: La Paz.

A combination of a short flight, starting at 9,000 ft and going to about 13,000 ft meant we were flying closer to the mountains than any North American flight we've ever been on. At some points, we seemed to be flying down the valley between two mountain peaks (at a lower altitude than the summit of either mountain). It made for some great views (and so great pictures). 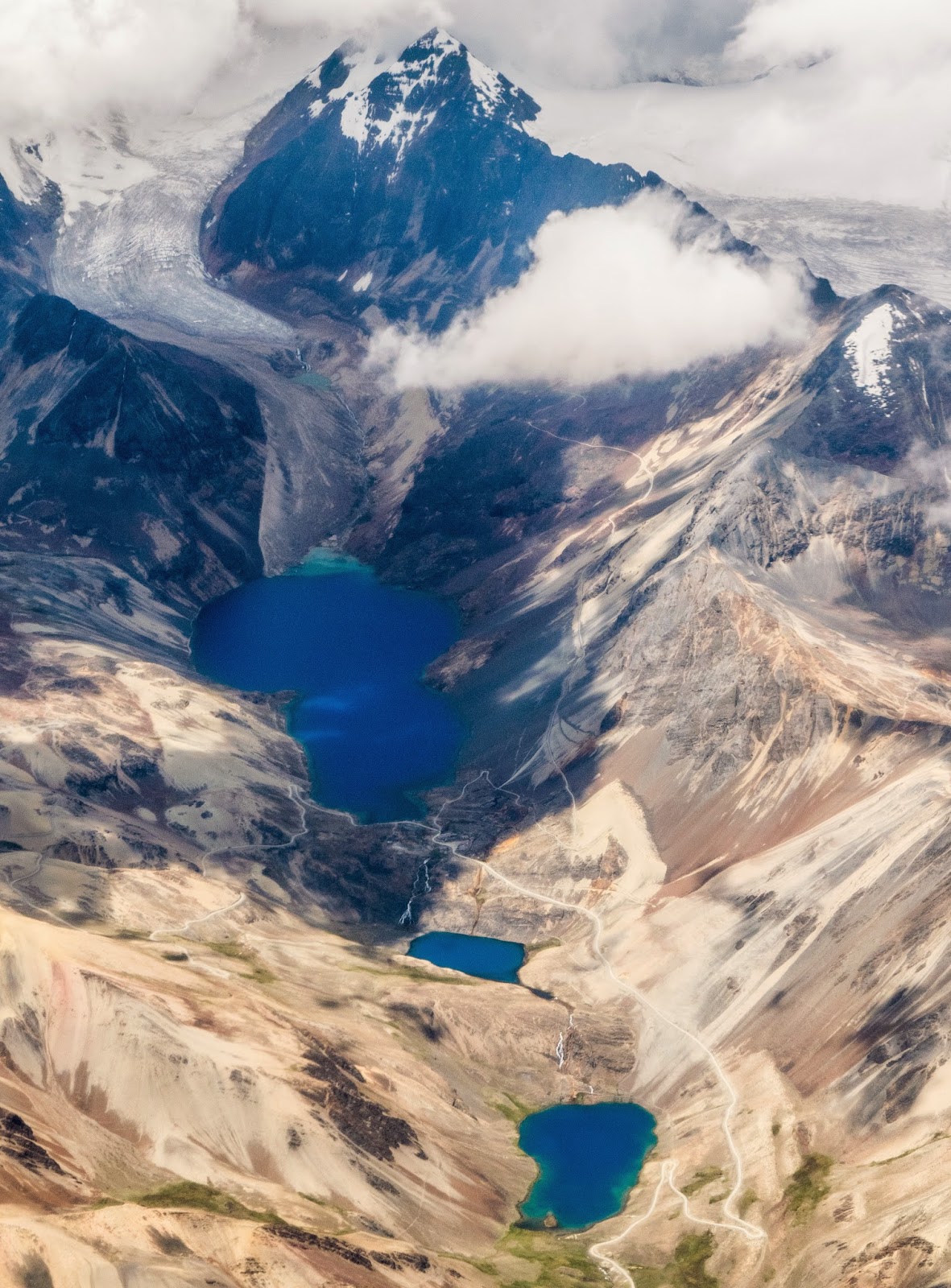 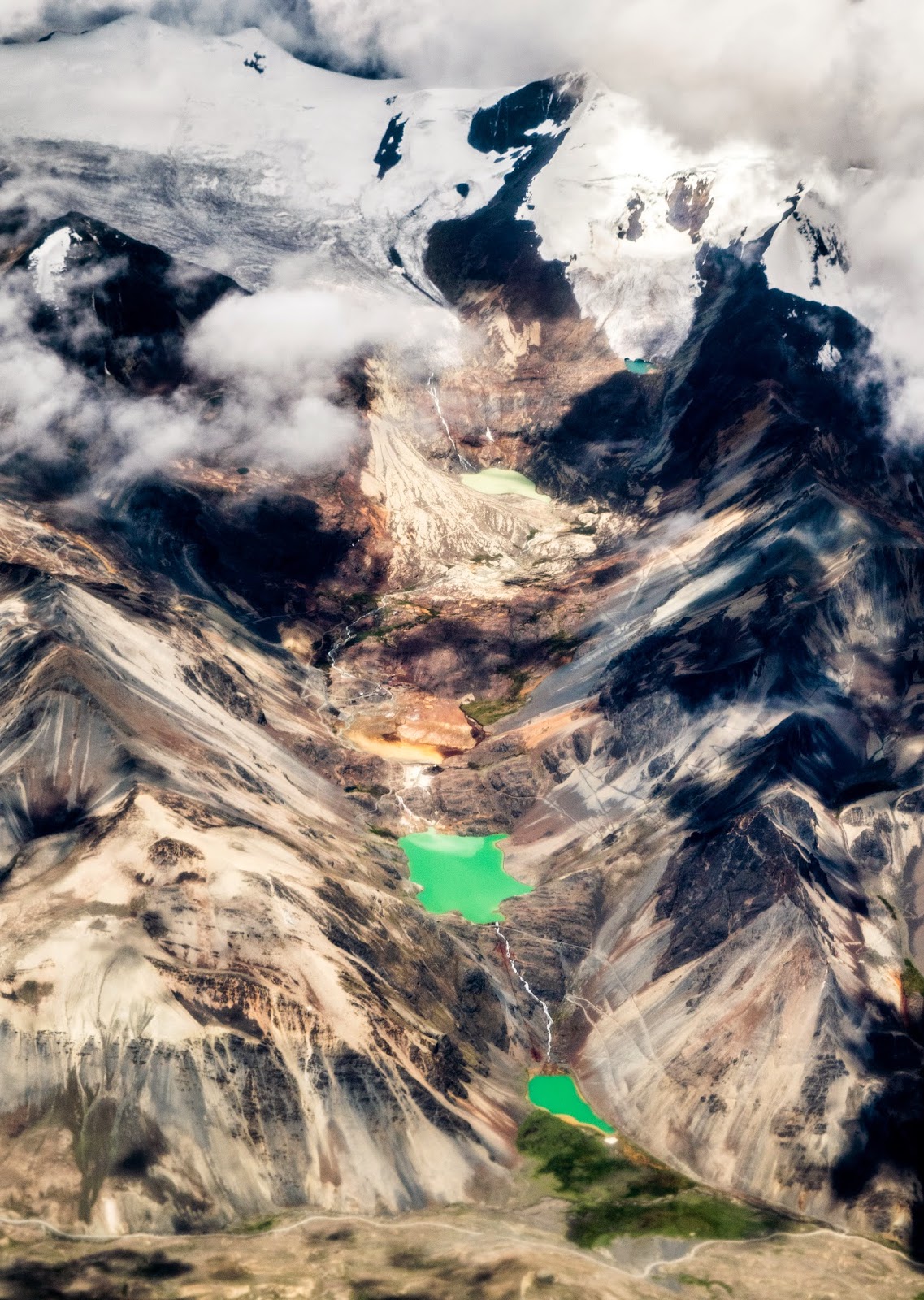 A glacier sitting on top of a mountain, with two valleys it was running into. It was kind of bizarre to see the lake system on the right so green when the one on the left (just one ridge-line over) so blue. 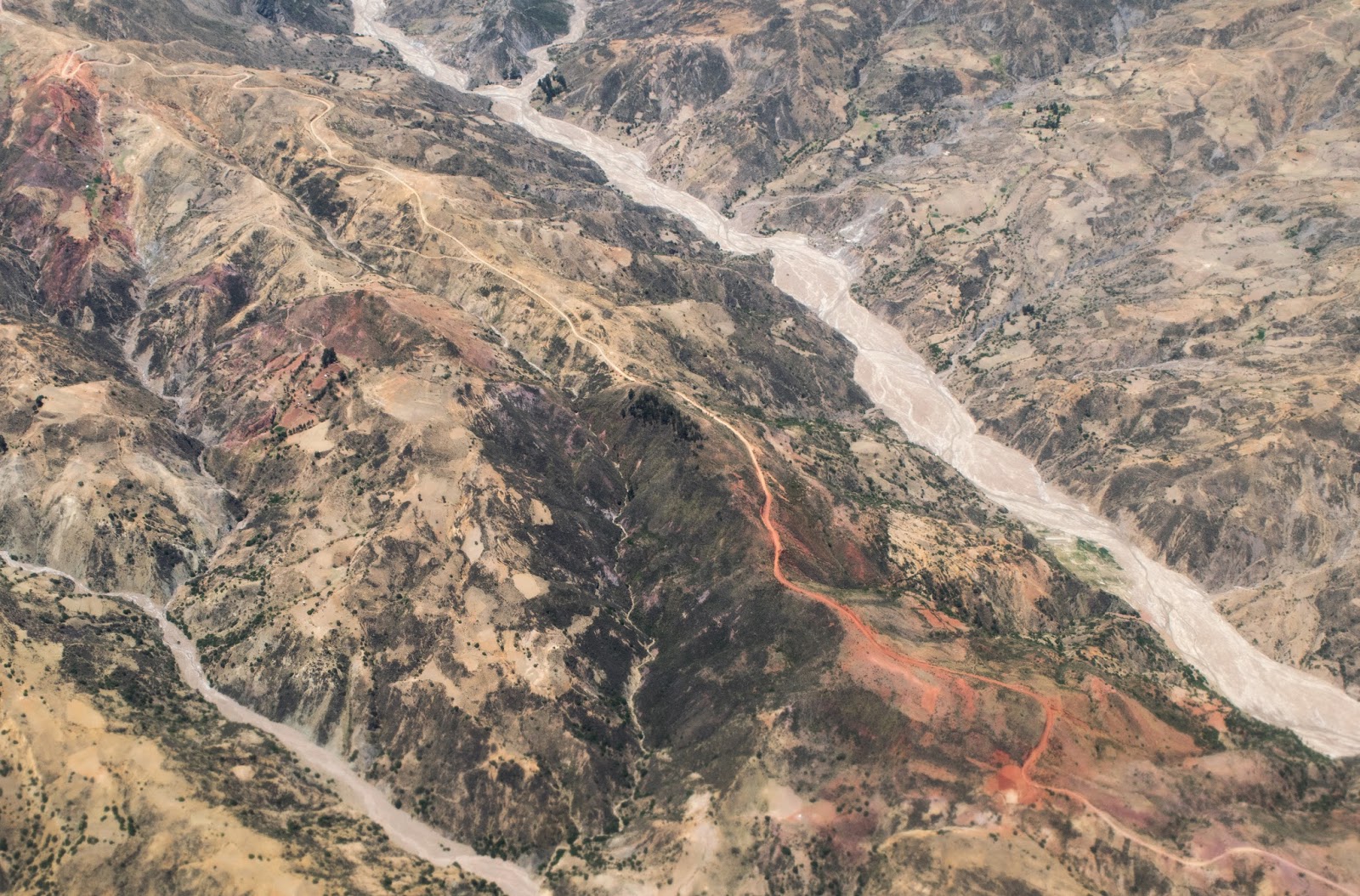 A road winds along a ridge, showing the deep red soil in some parts. 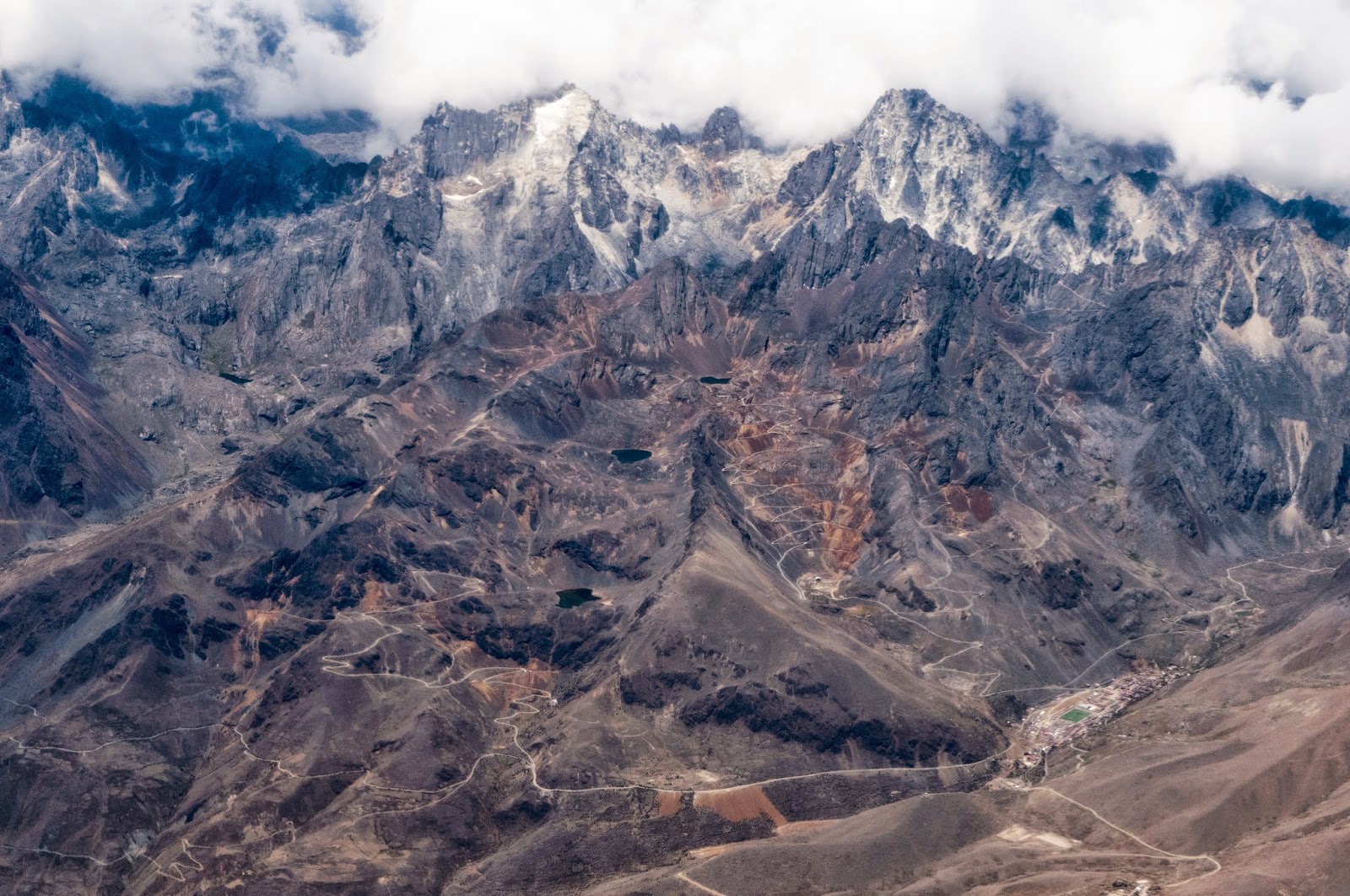 Some of the extremely windy roads that turn a 1 hour flight into a 12+ hour drive. 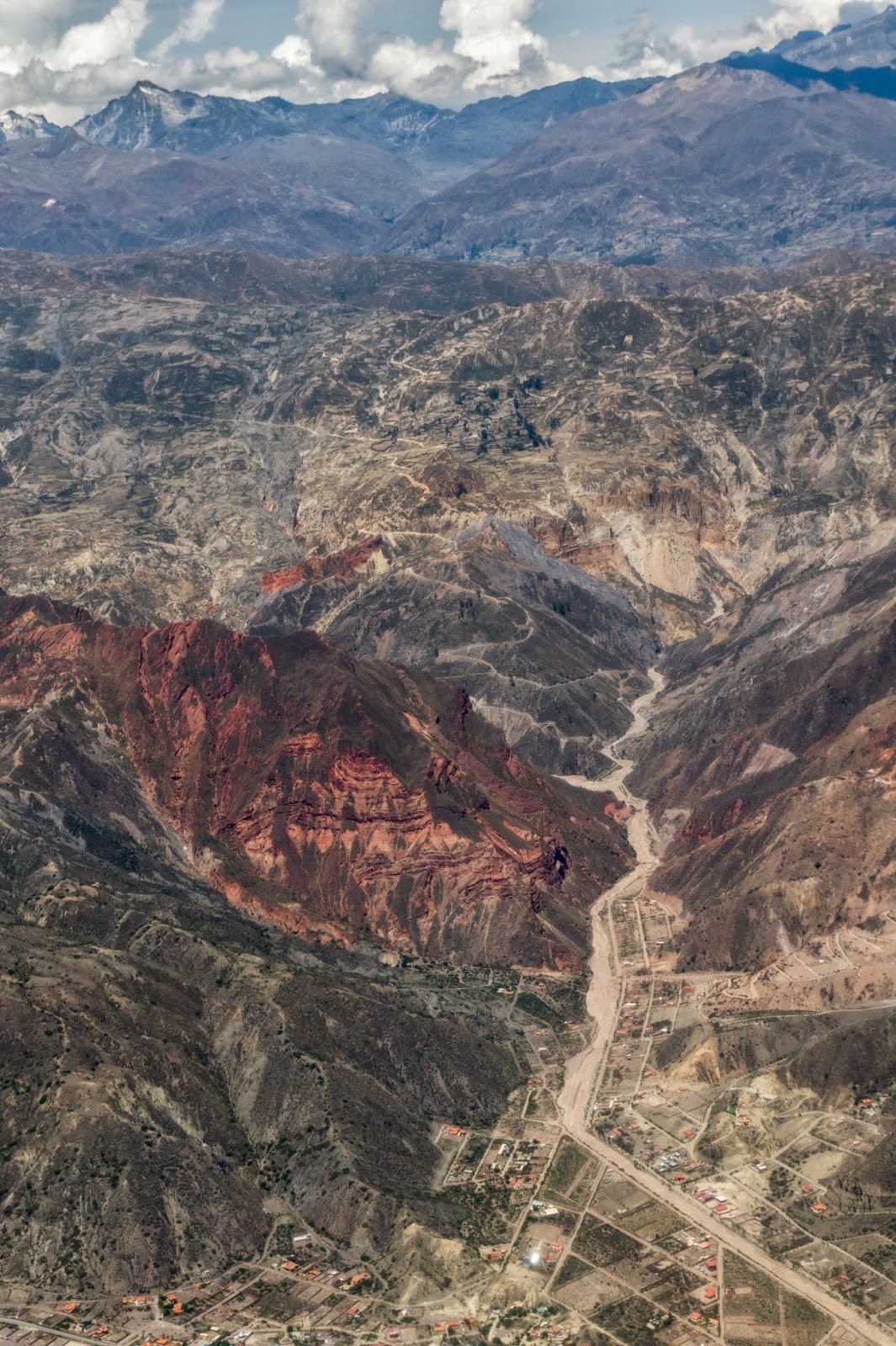 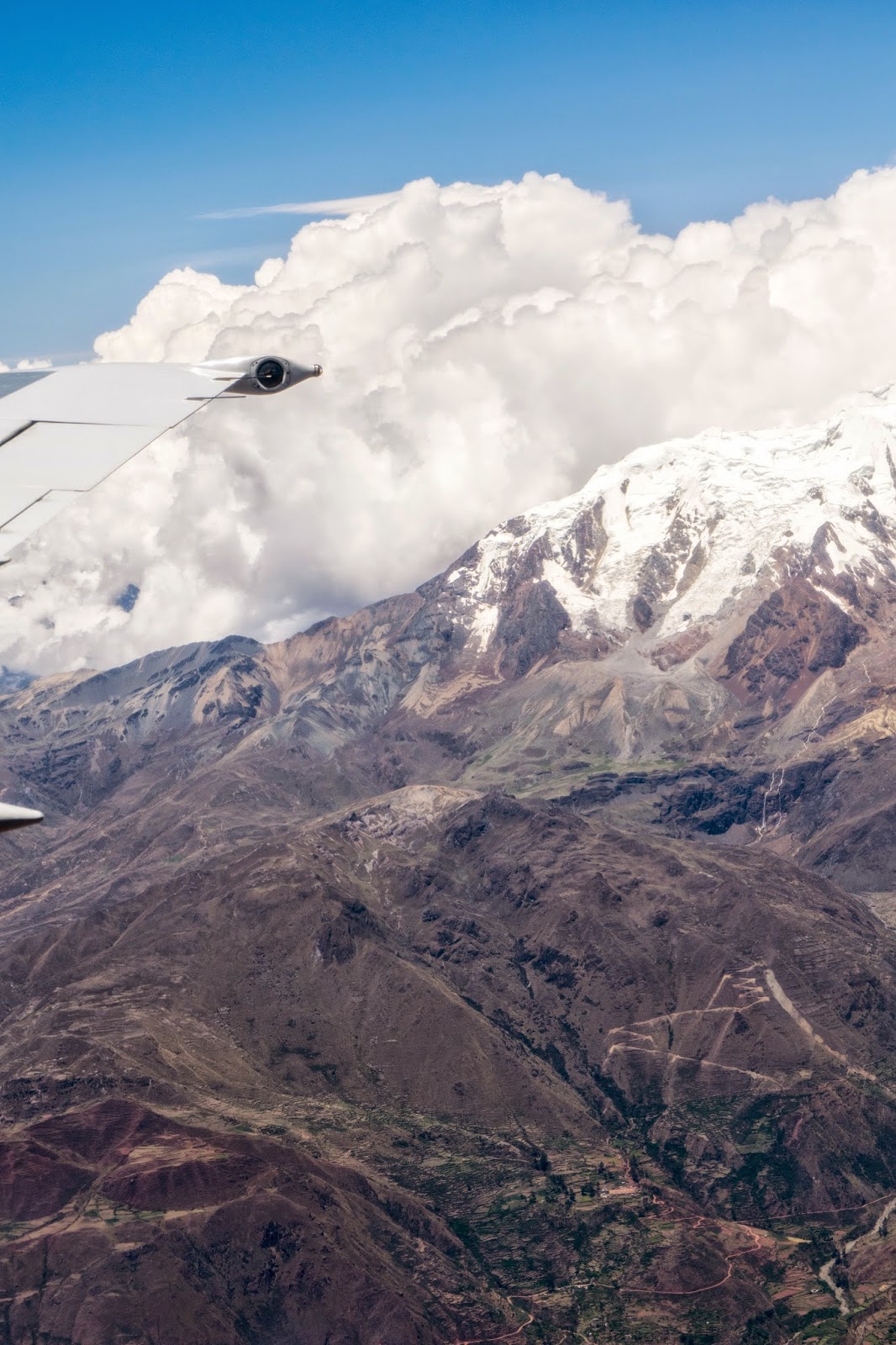 More of the deep red soil (left), and the mountain right outside La Paz (right), as we descended to land.

As we came in for our landing, we saw for ourselves the difference between La Paz, which sits at 12,000 ft in the bowl-like cauldera of an extinct volcano, and El Alto, a sprawling city on the plains above at 13,600 ft (which also contains the airport). 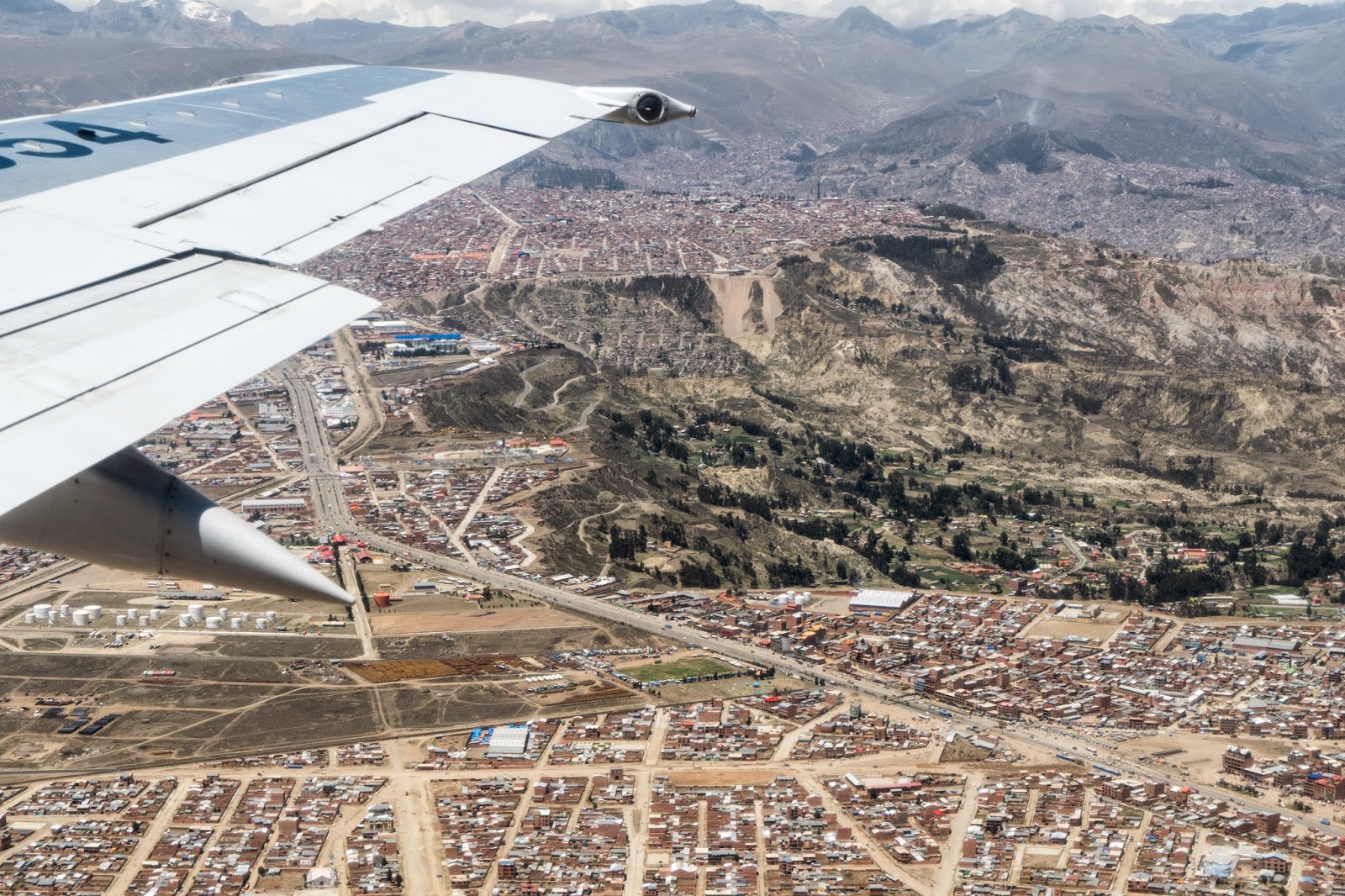 One part of El Alto had a hexagon layout, with seemingly nothing in the center of each zone. 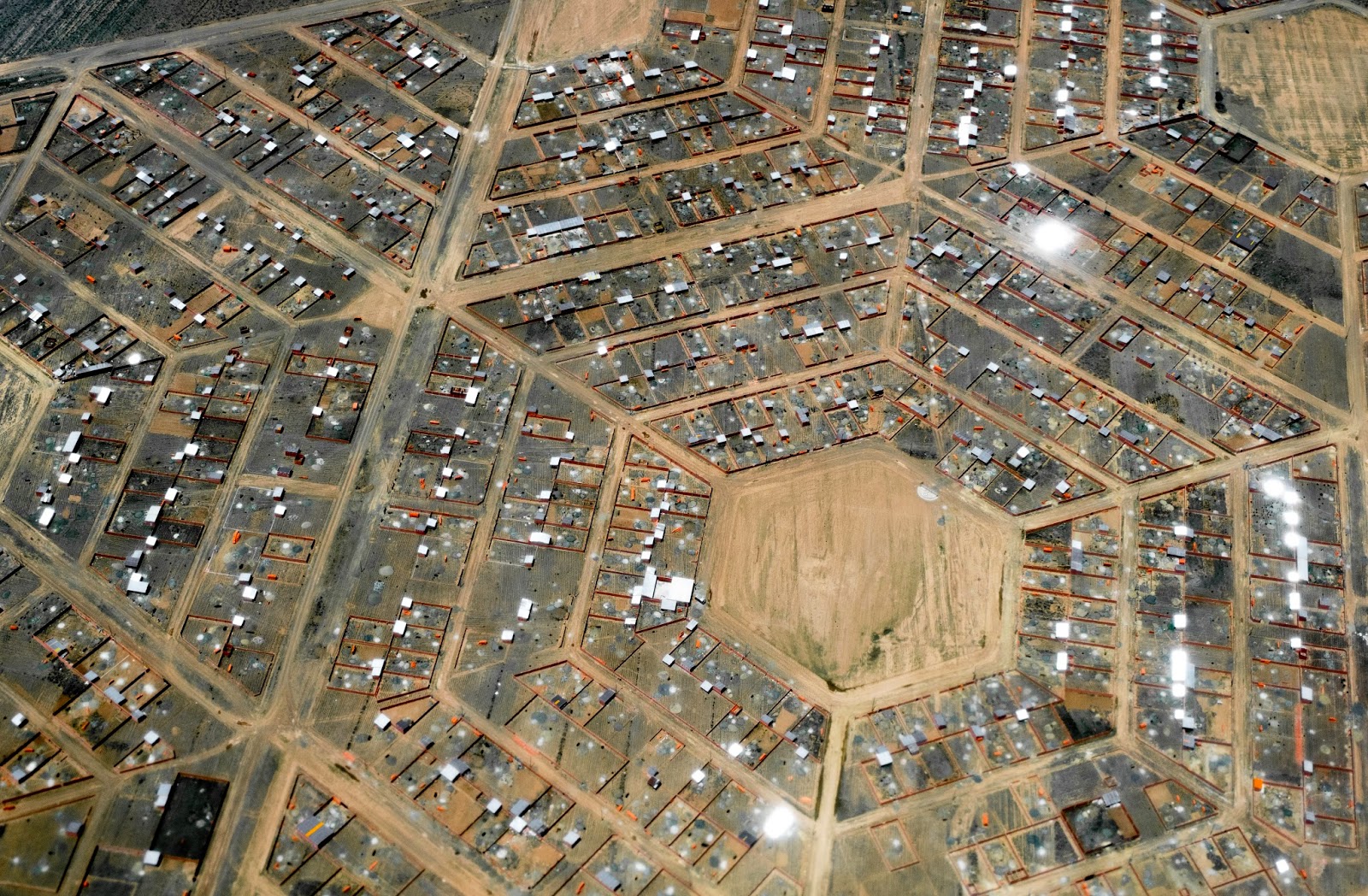 Being an "airsick lowlander", it's hard to mentally take in the global perspective of where we landed. El Alto looked like any semi-urbanized sea-level farming region. Sit back and think about it however, and the mountain peaks remind you that these plains are over 13,000 ft above sea-level. Mind blown. 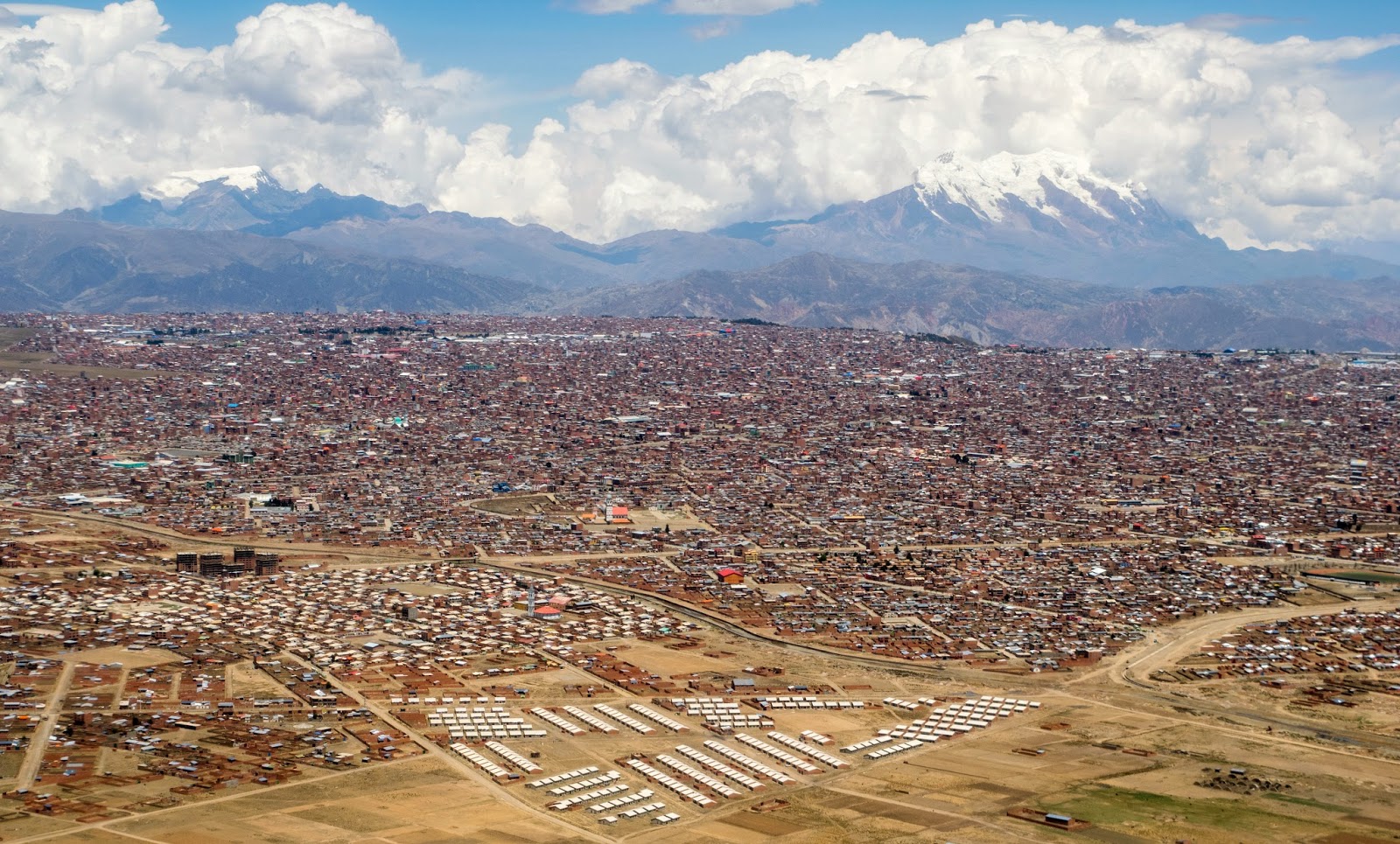 After landing, we loaded a cab up with our bags, and drove down into the city. After winding our way down the side of the cliffs, we pulled up to Hotel Milton. After hiking up to the 7th floor (the ancient elevator could only handle 3 people, or 2 people with gear), we collapsed onto our beds for a bit. 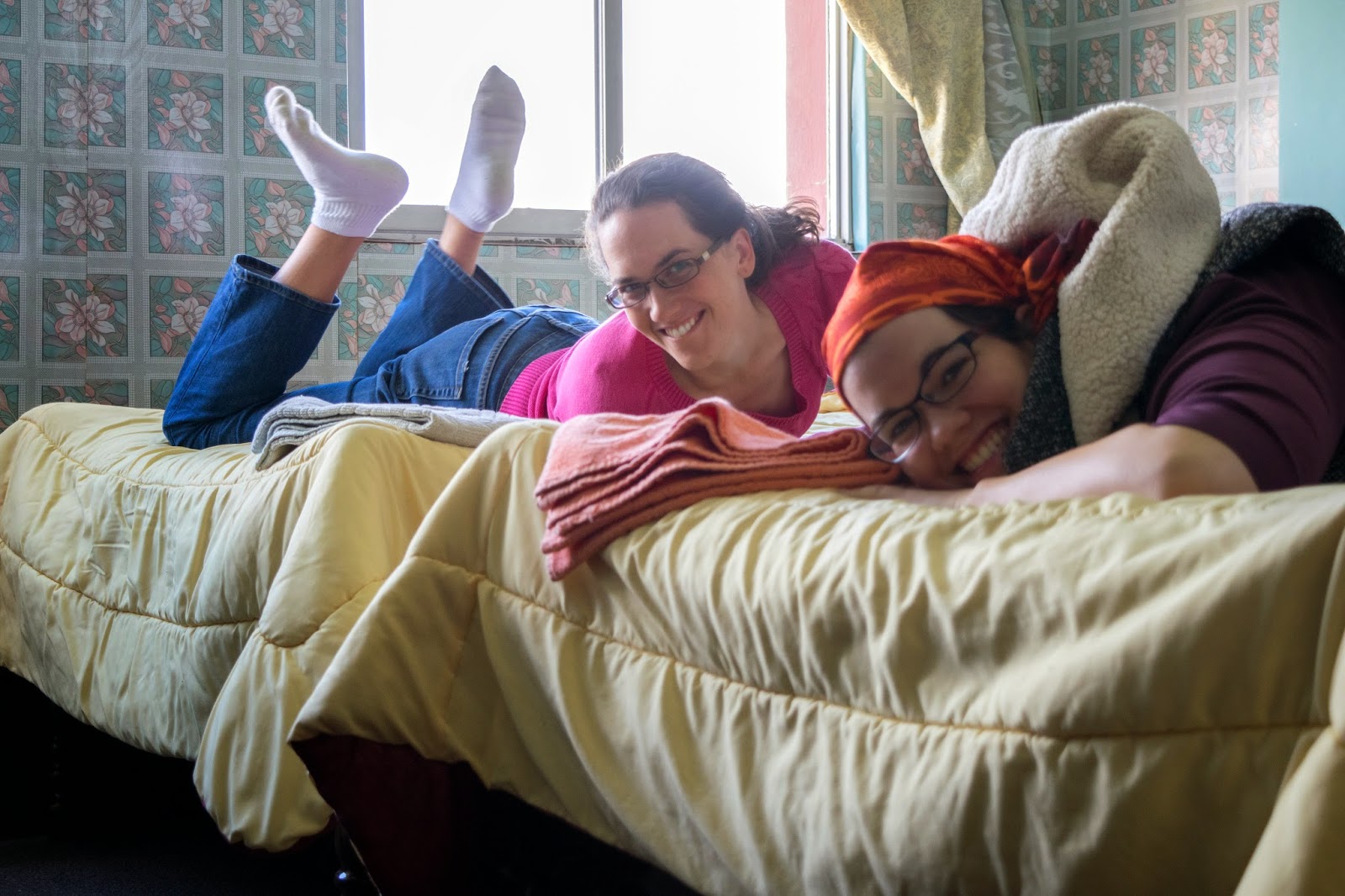 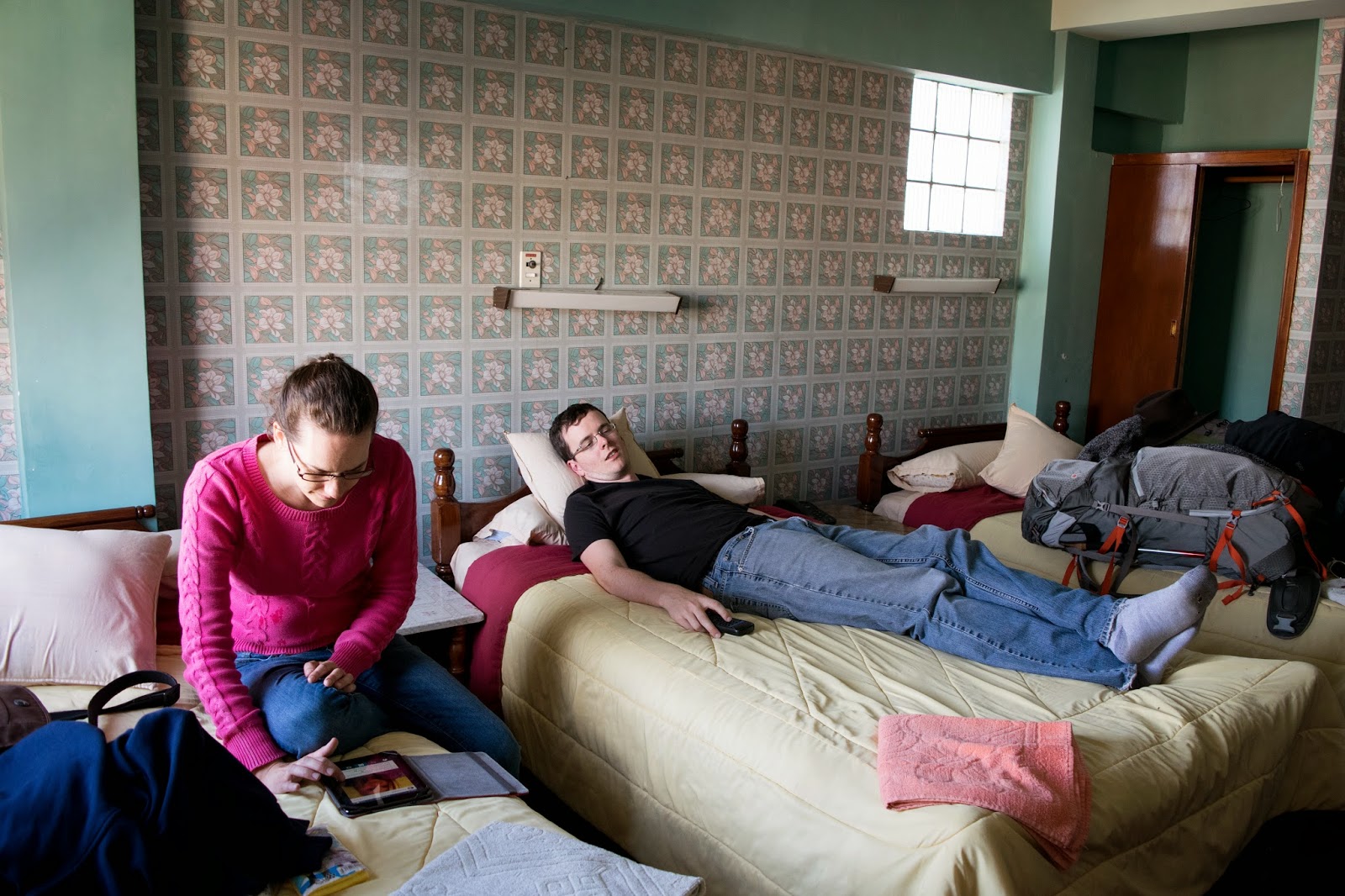 After resting for a  bit, we went for a short walk to get some dinner. We were famished. About a block away we came to a street with a Mexican place, an English pub, and a Swiss fondue place. We talked to the owner of the fondue place (a Texan), who said that the whole street's businesses were run by expats, "all Gringos". The problem with Gringo food is that it is more expensive than Bolivian fare and we weren't looking for pub style food or Italian. At this point Colleen is starting to get kind of shaky and complainy about hunger and we had to trudge back up out of Gringo Alley (as we dubbed it) because the Mexican place didn't open for another half and hour.

And trudge we did. The air was thin. Any incline seemed excruciatingly difficult. And La Paz is full of inclines.

We grabbed some Salteñas and bottled water for snacks later, went back at 4 for Mexican food then back to our hotel.

It was time for some heavy-duty laziness resting and adjusting to altitude. If we couldn't adjust, the hotel had oxygen service at about $3 for 10 min. Honestly haven't seen that service before. 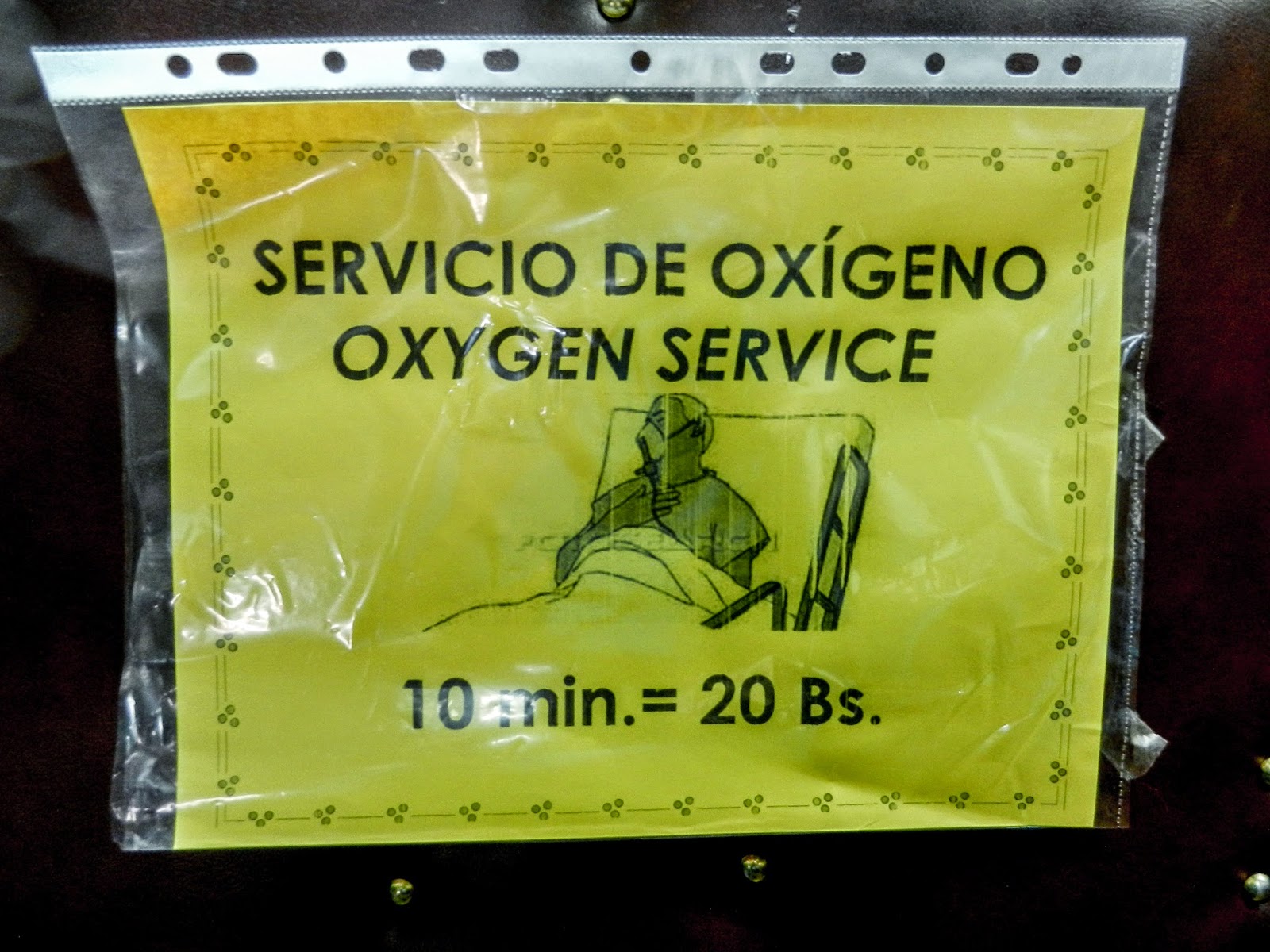 Steve wanted to complete the laziness package by watching TV, and found Star Trek: Generations in Spanish. He settled in, figuring that he knew the lines of the movie well enough to learn Spanish by watching it. 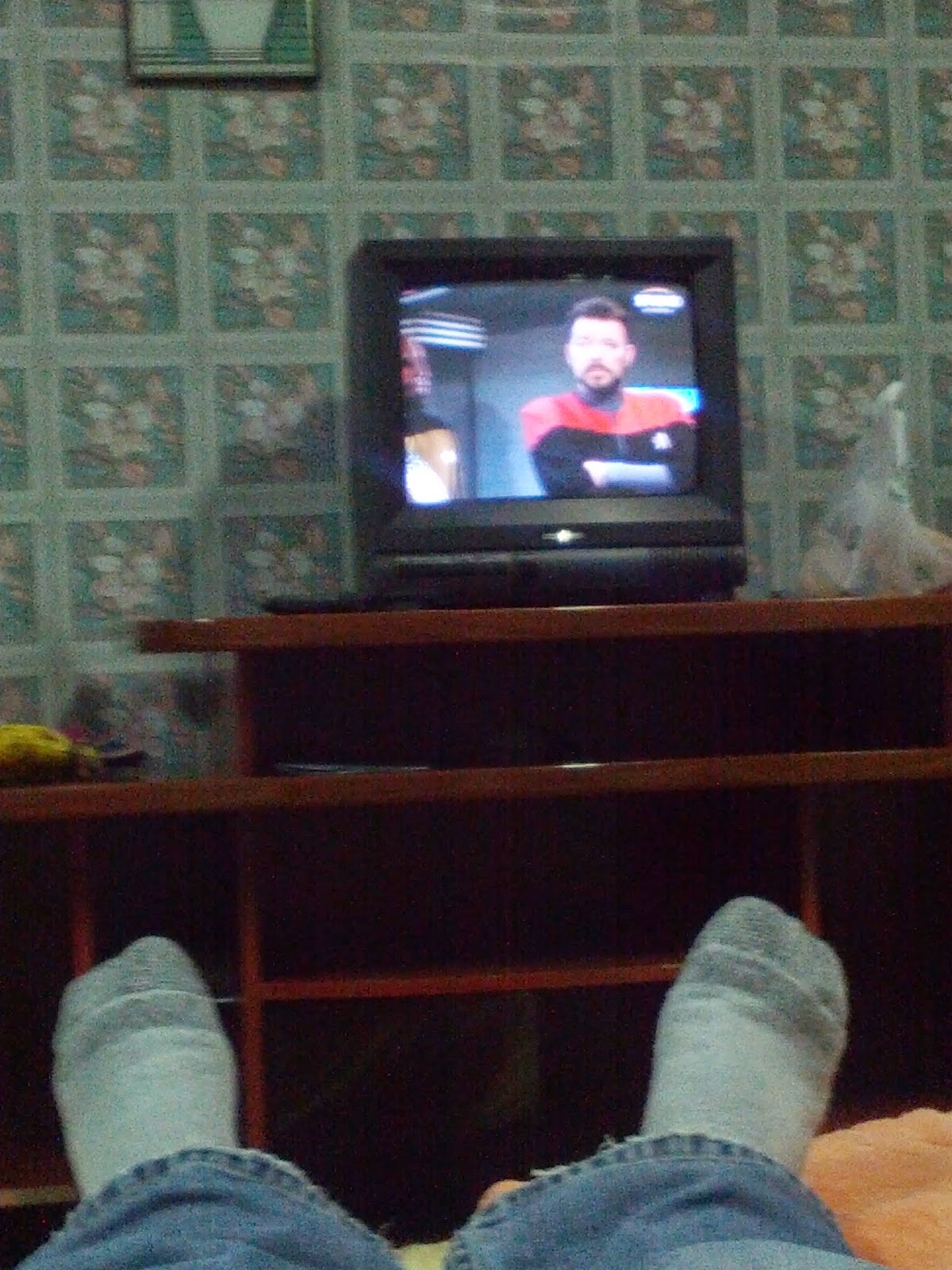 Ultimately Steve remembered no new words but Colleen picked up "penetrado" when a photon torpedo was to "penetrate" the shields. Karen said that's not the kind of word you want to pick up.

Instead of resting like an intelligent person, Colleen took the Spanish Star Trek viewing opportunity to make use of a 7th floor view of the city (and the safety of being in our room), to take out her fancy camera and see what she could see. 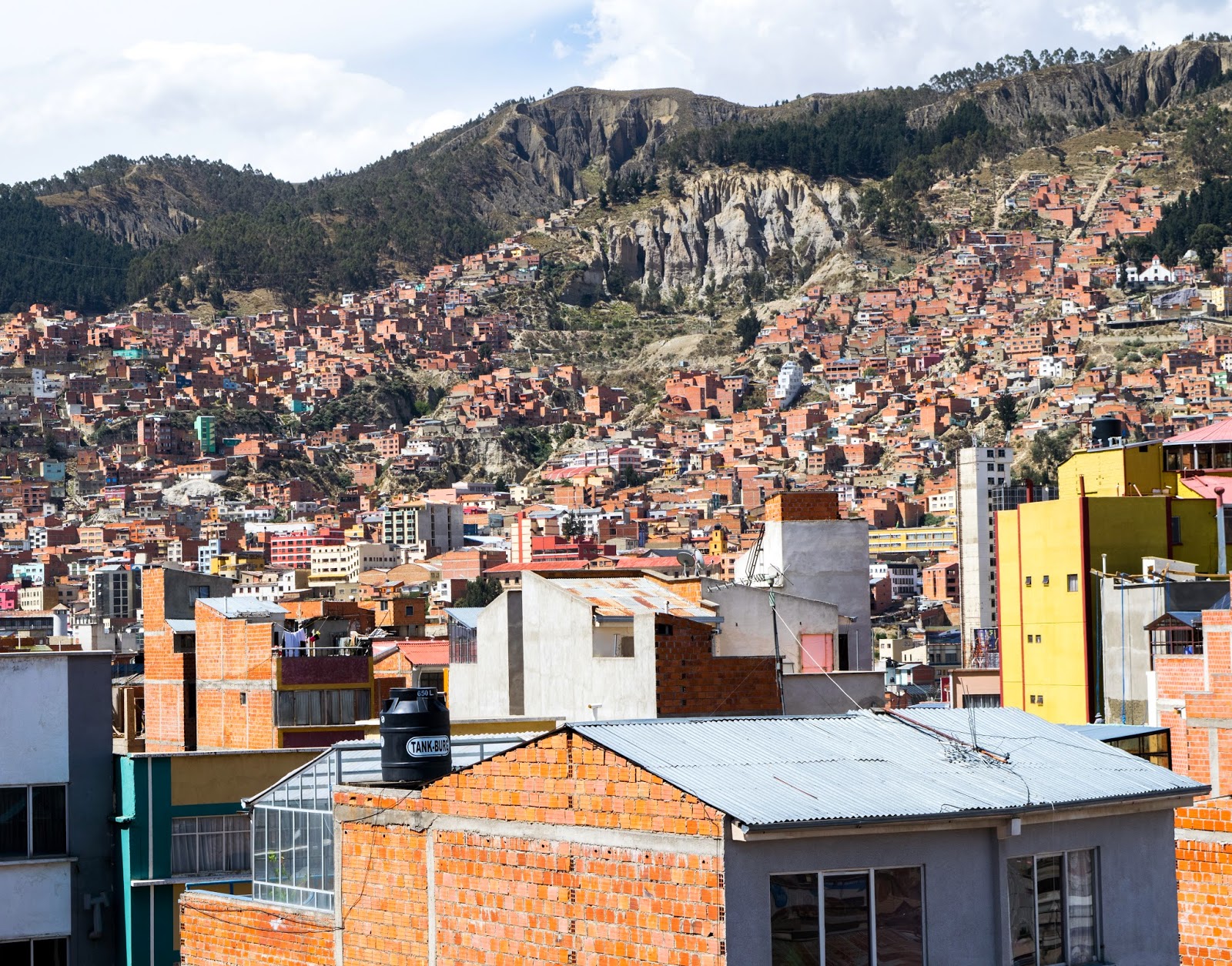 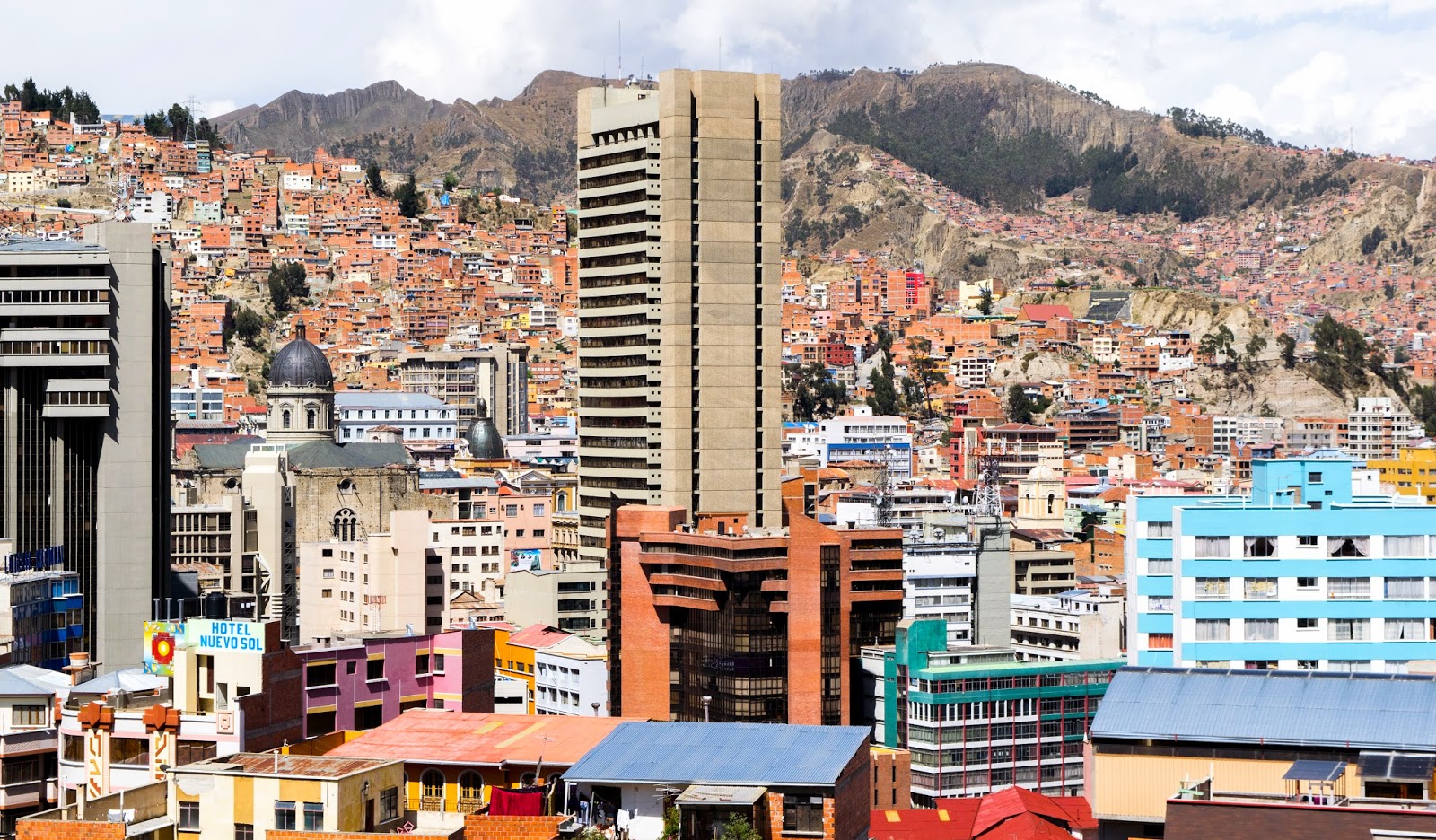 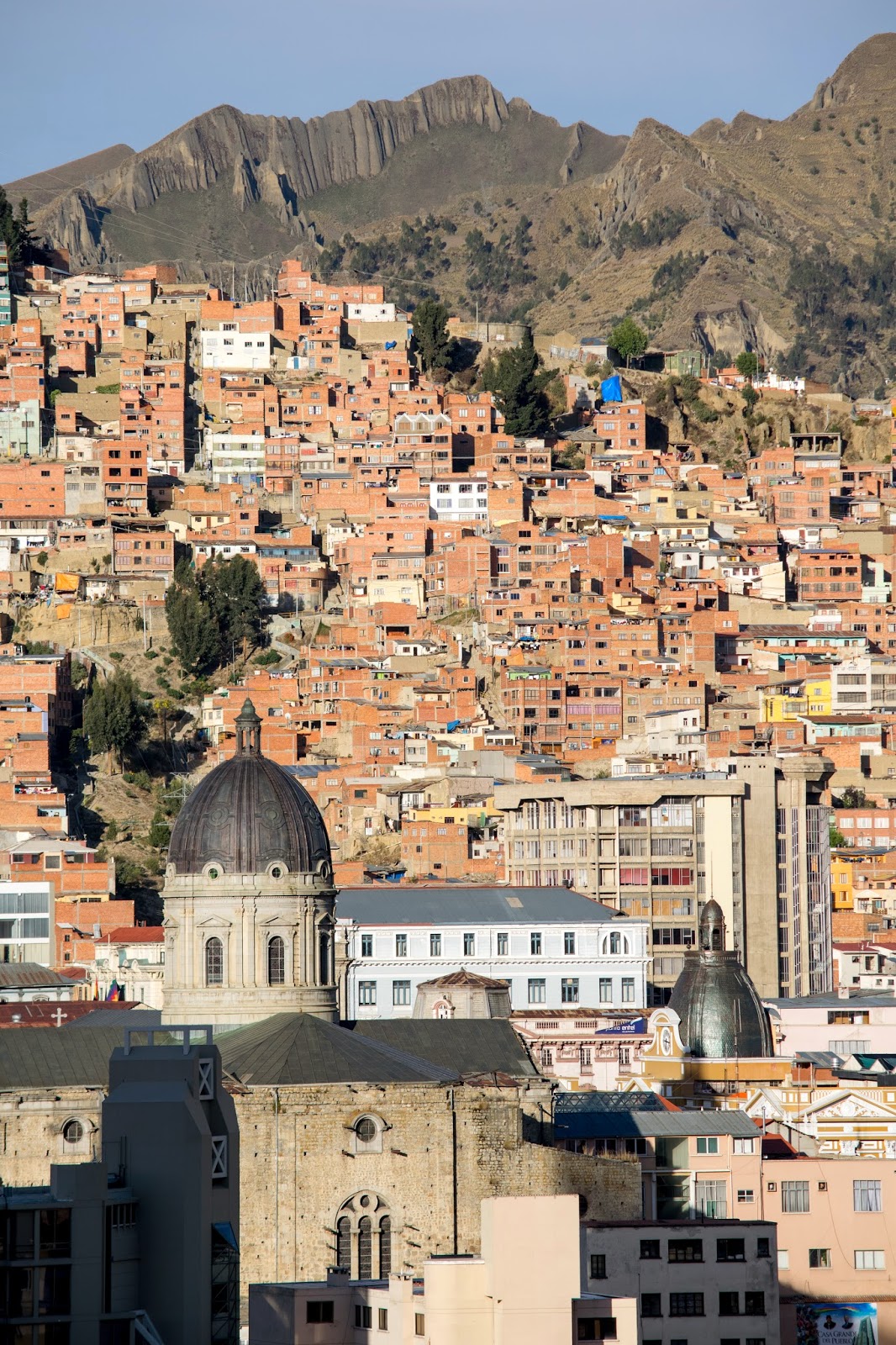 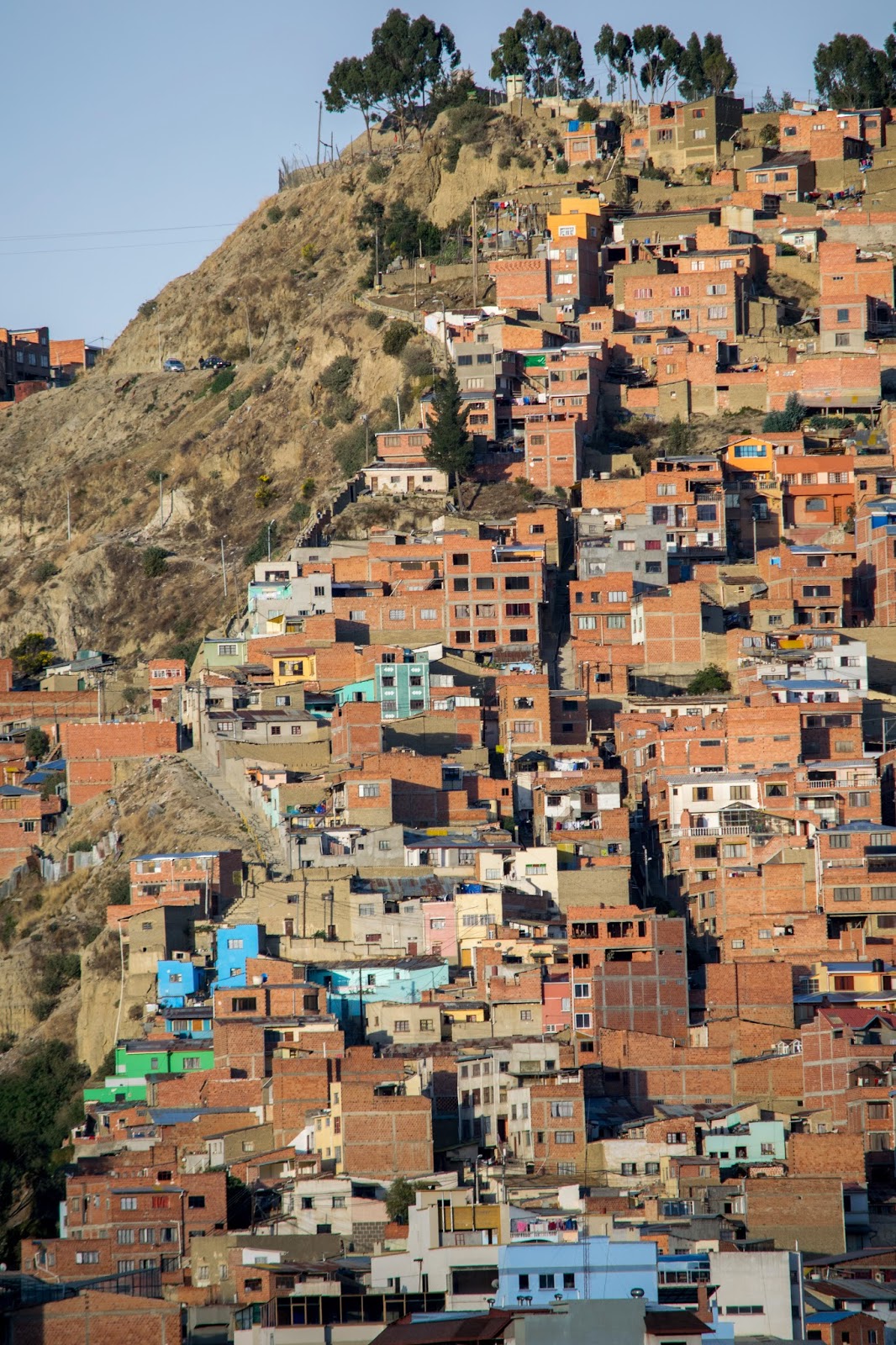 After capturing some of the city, which grows up the walls of the basin on all sides, she realized she could finally take photos of the street without being worried that showing off a camera would mark us as a target for thieves. 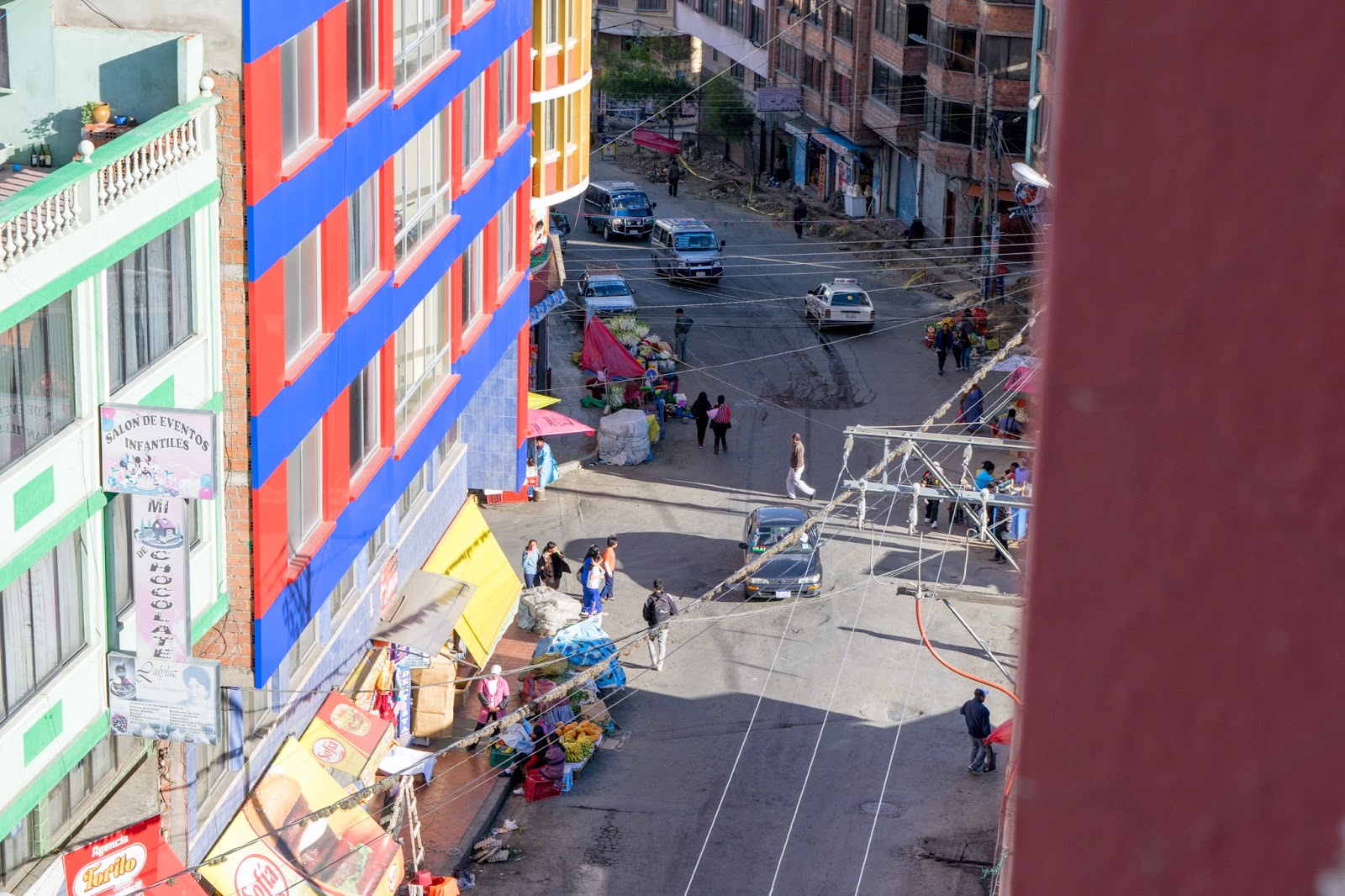 Then she realized that she could get of people without the awkwardness of obviously taking a stranger's picture.

Time for some secret stalker photos from above! 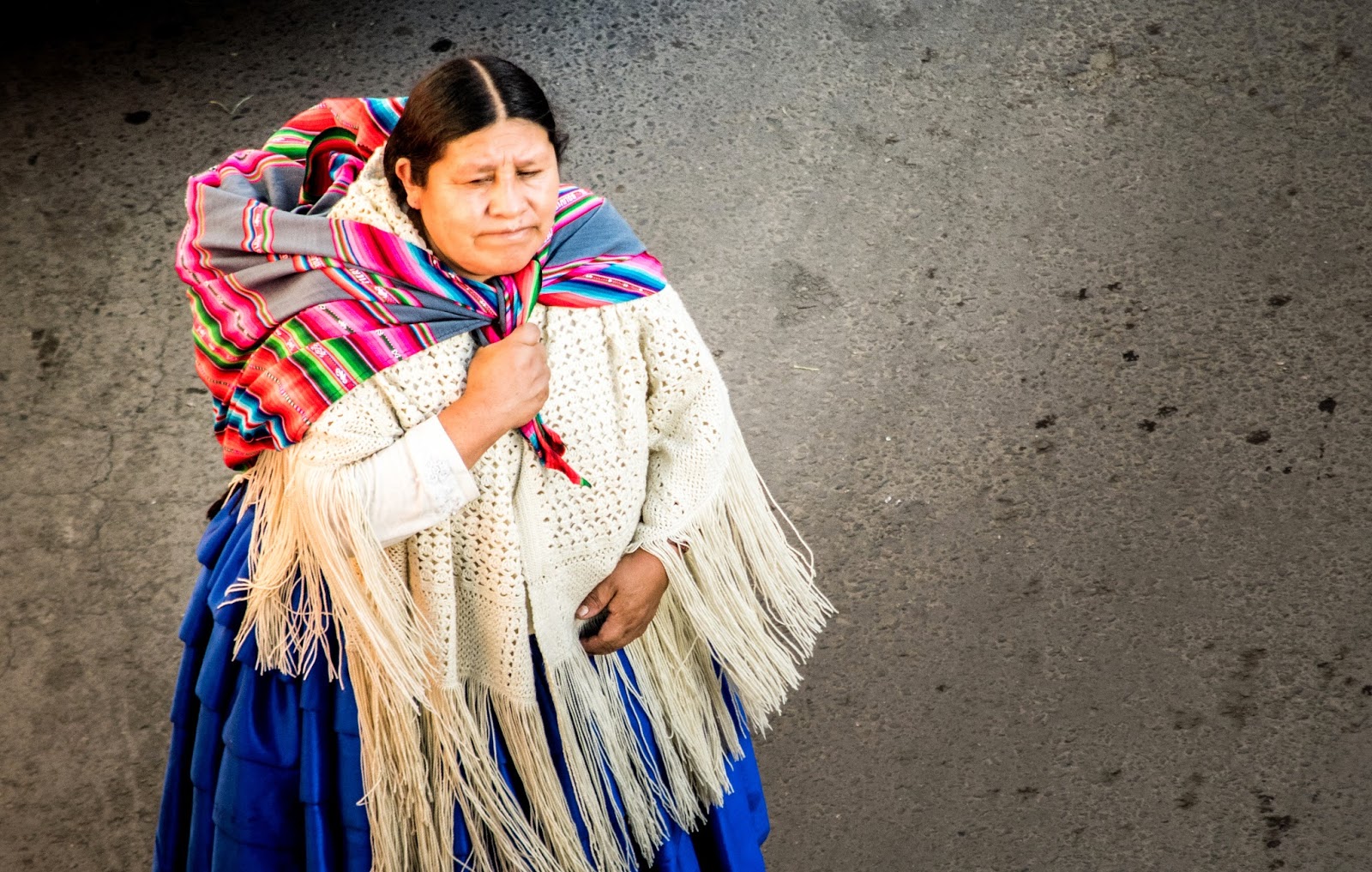 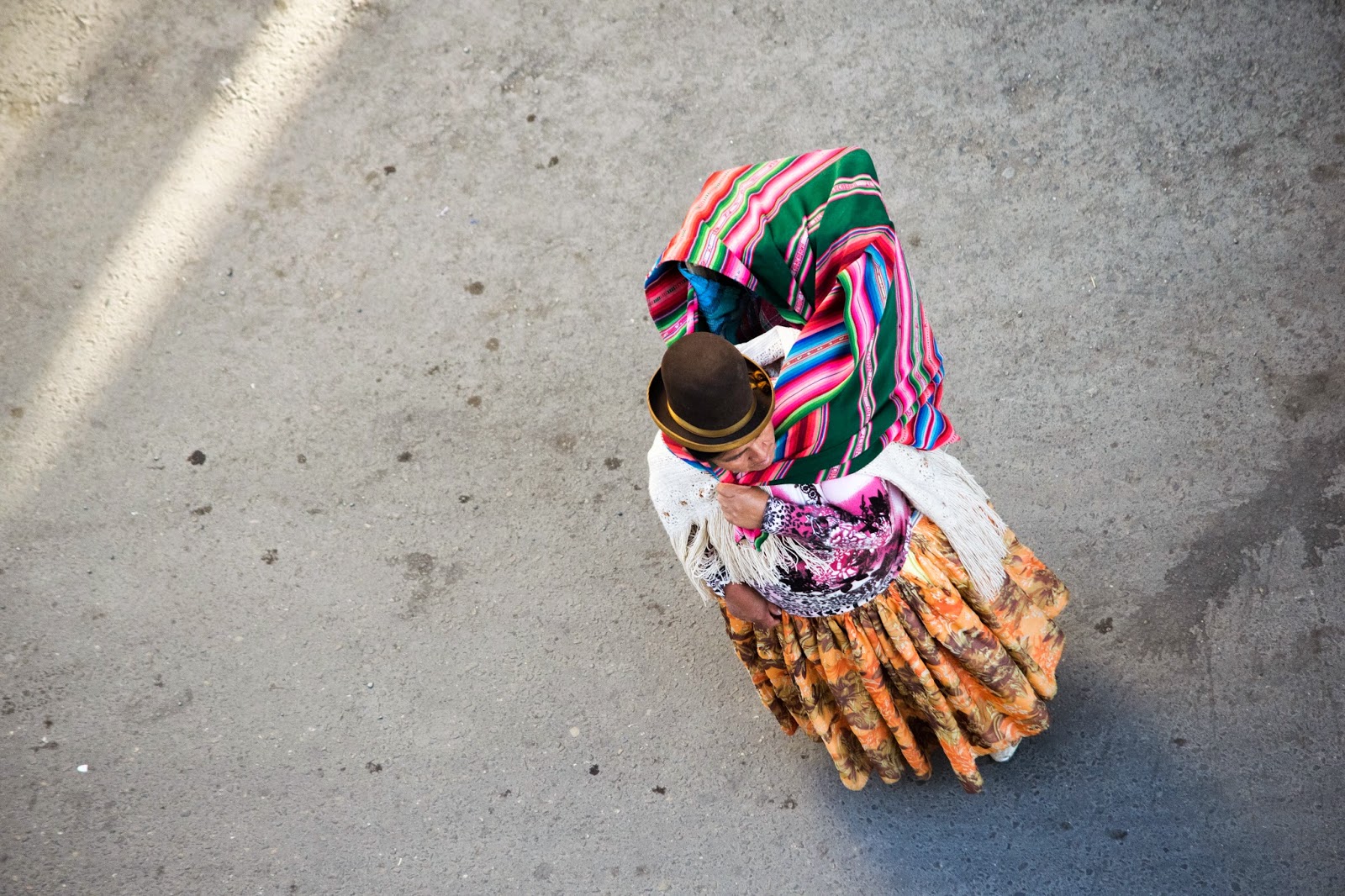 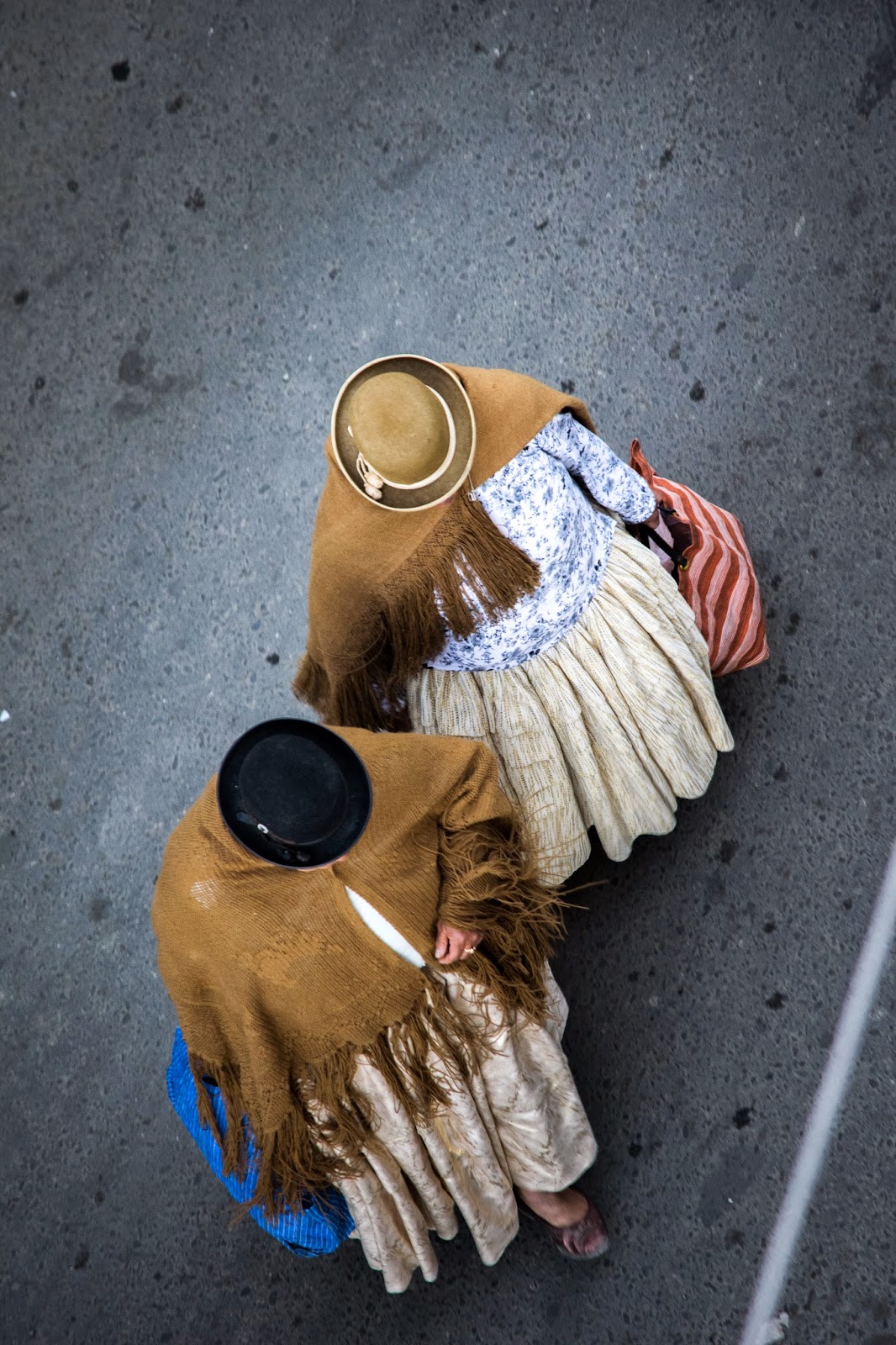 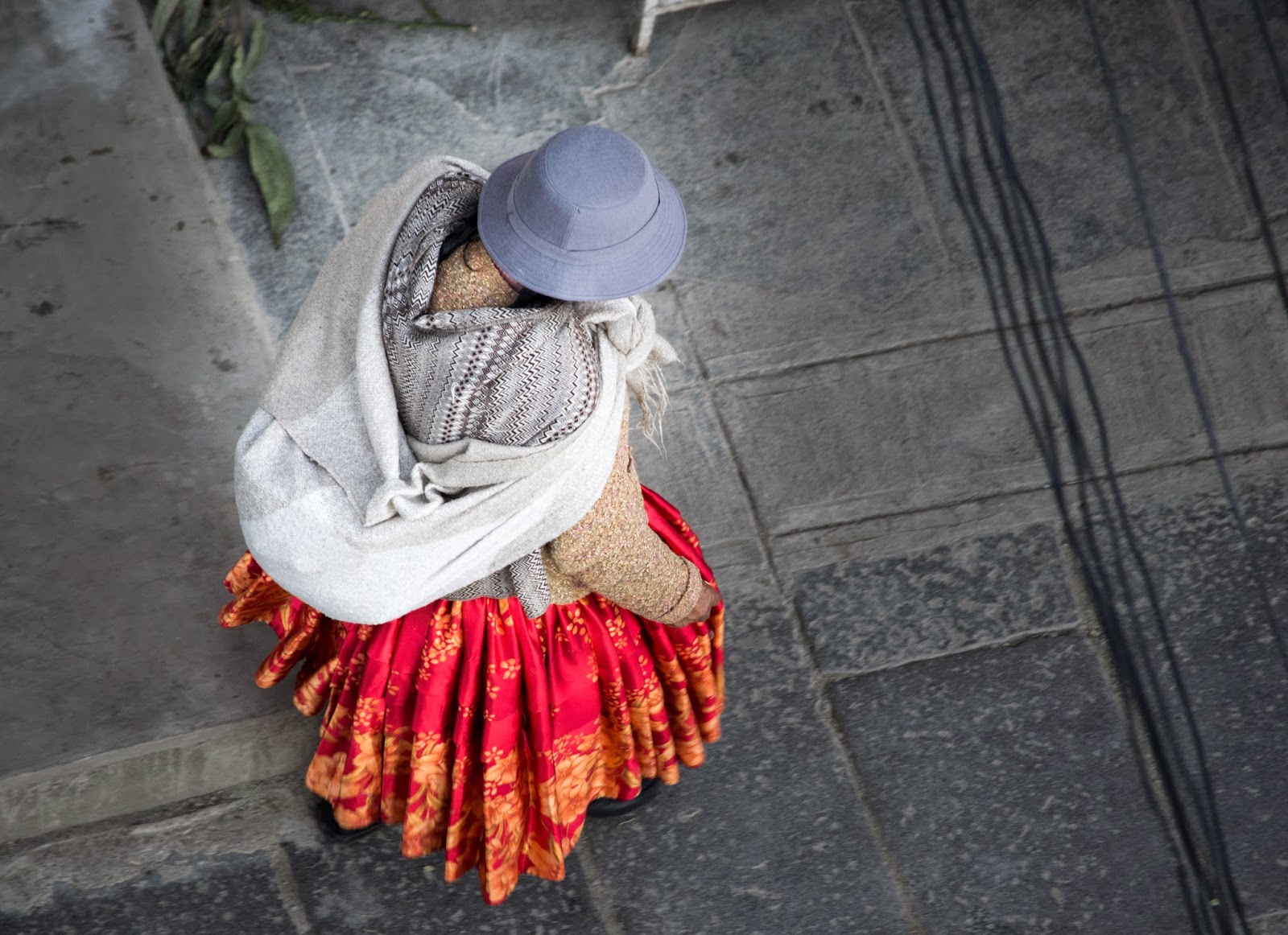 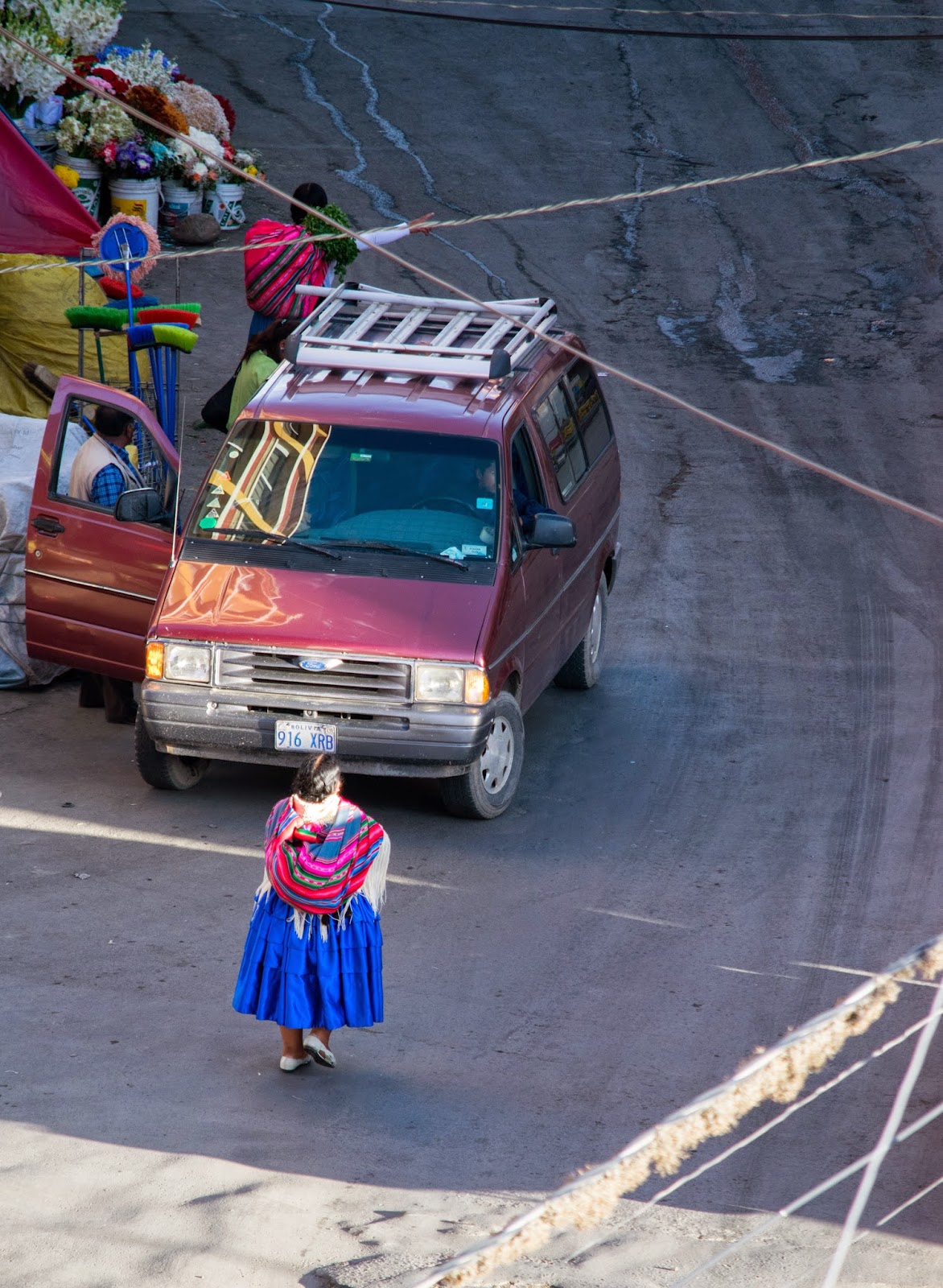 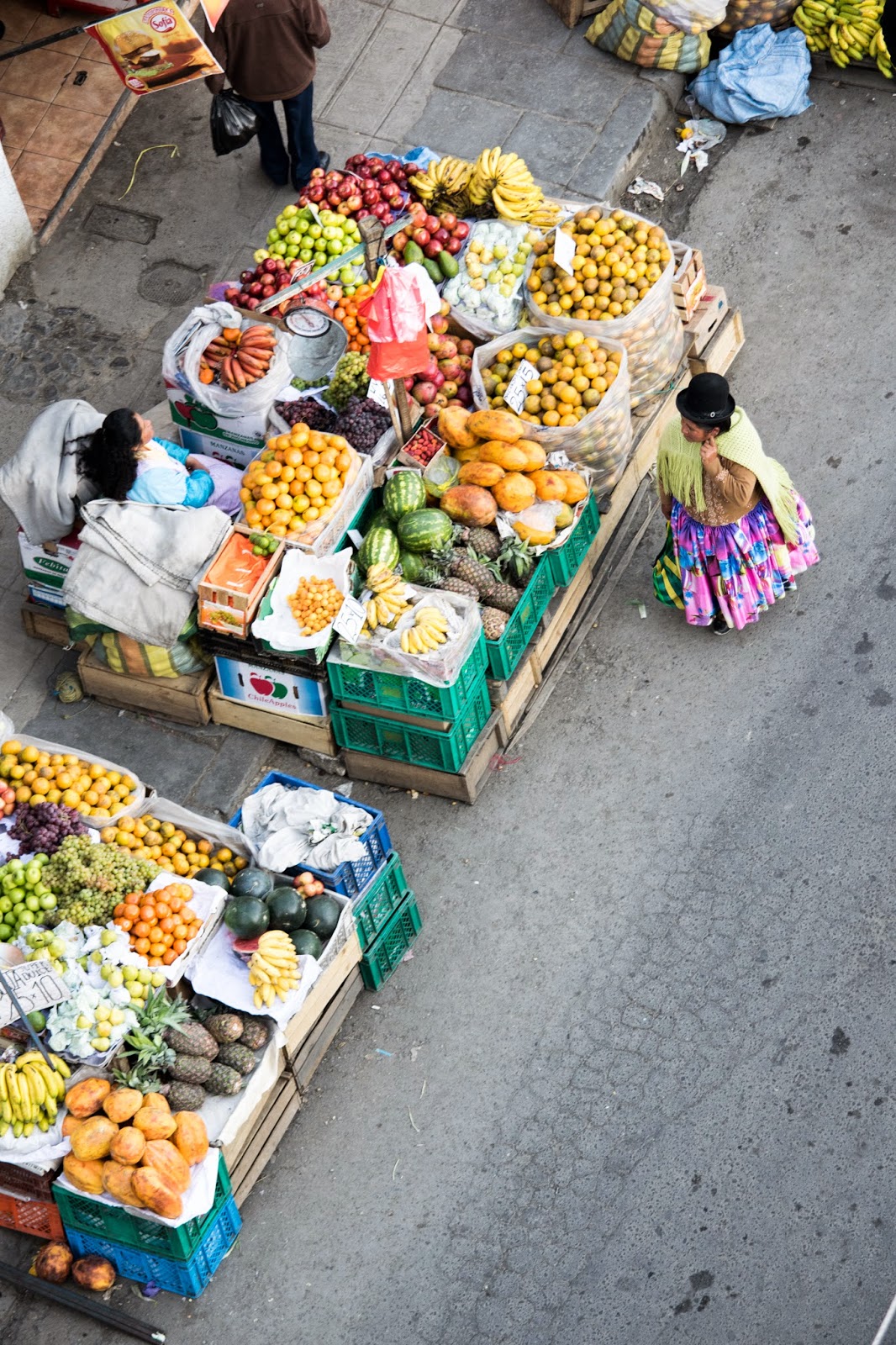 The sun sets quickly on a city in a valley, even while there's plenty of light on the surrounding mountains. 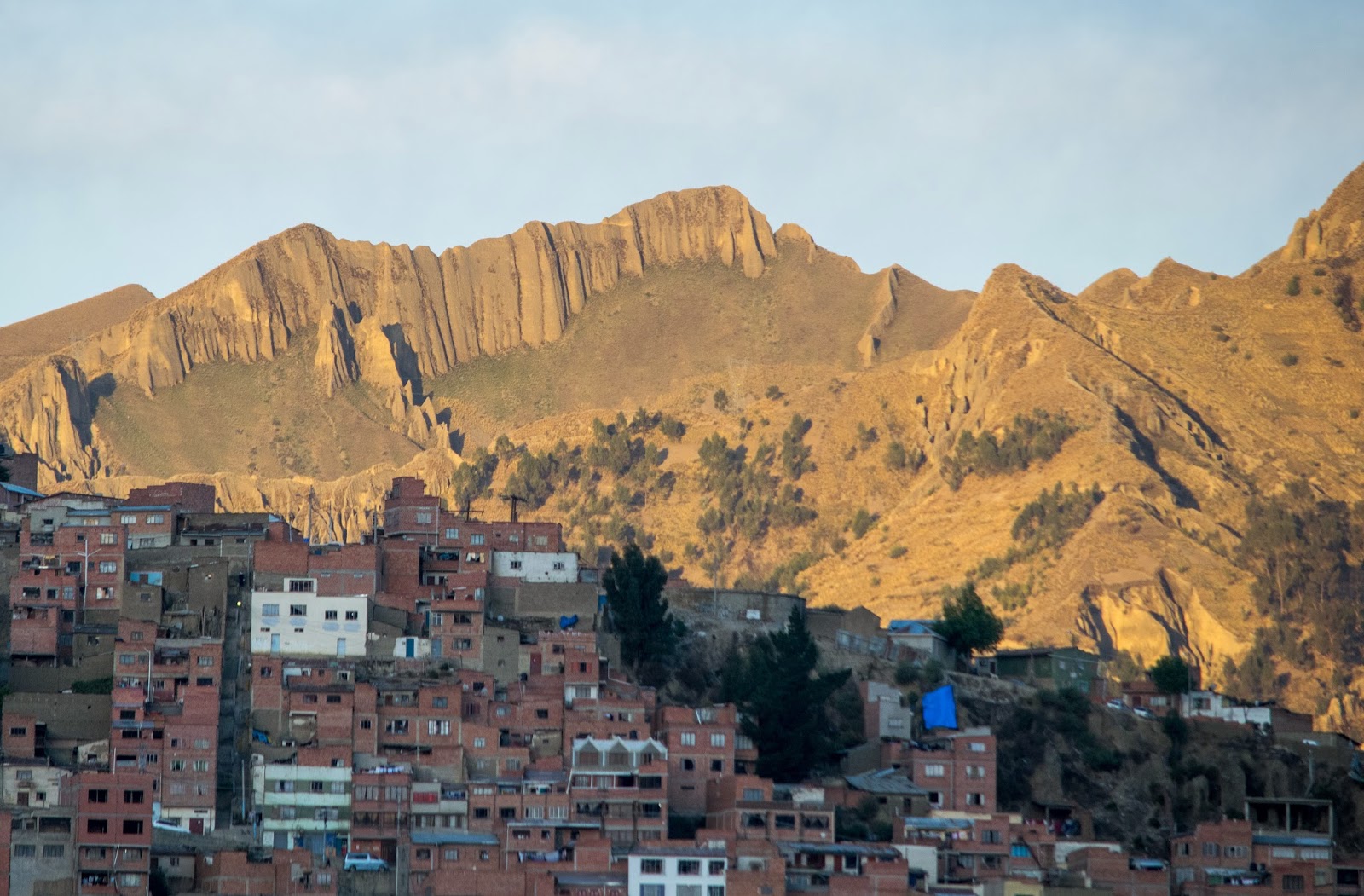 As it got darker, the tripod was attached to get some night photos. 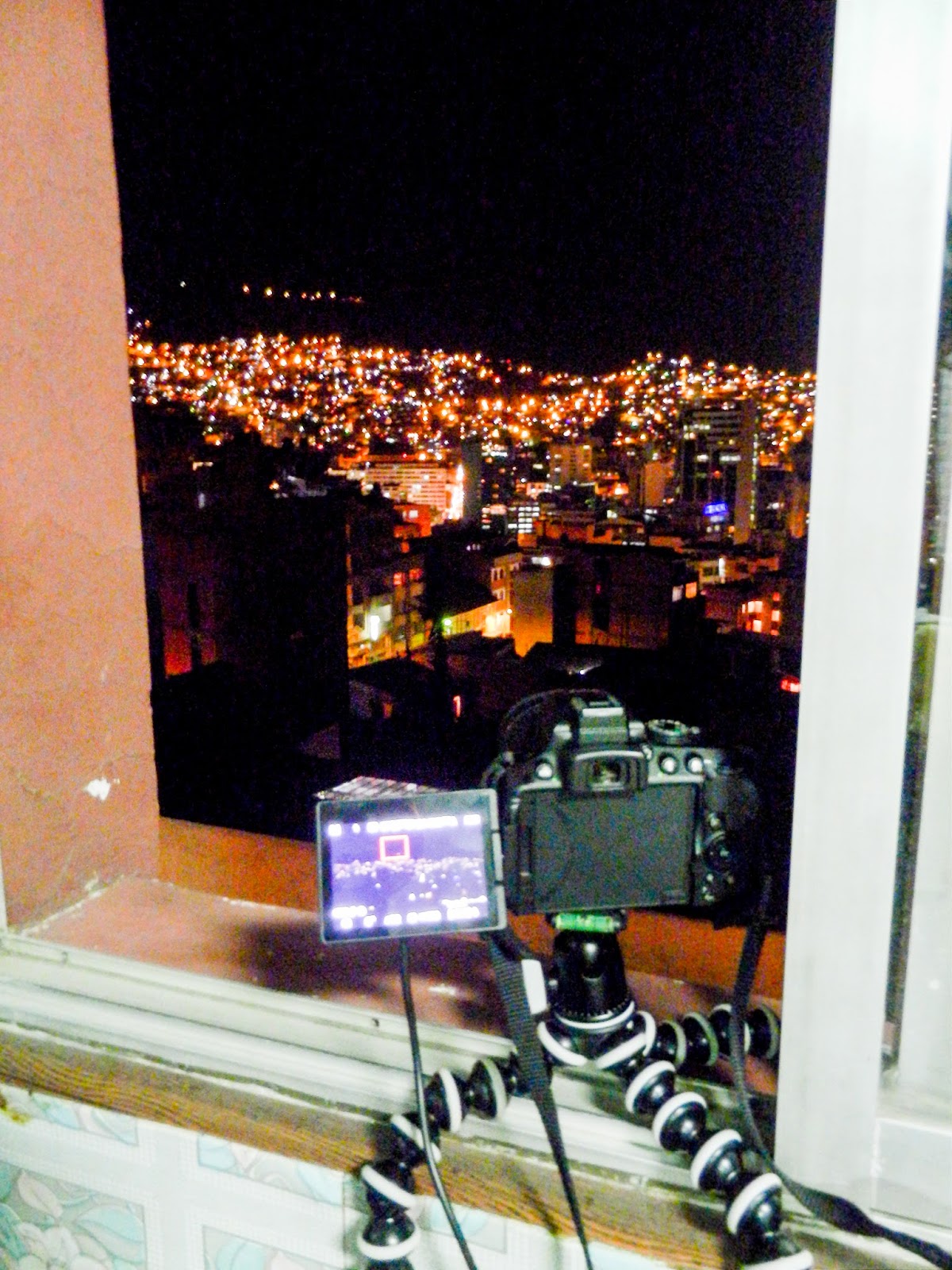 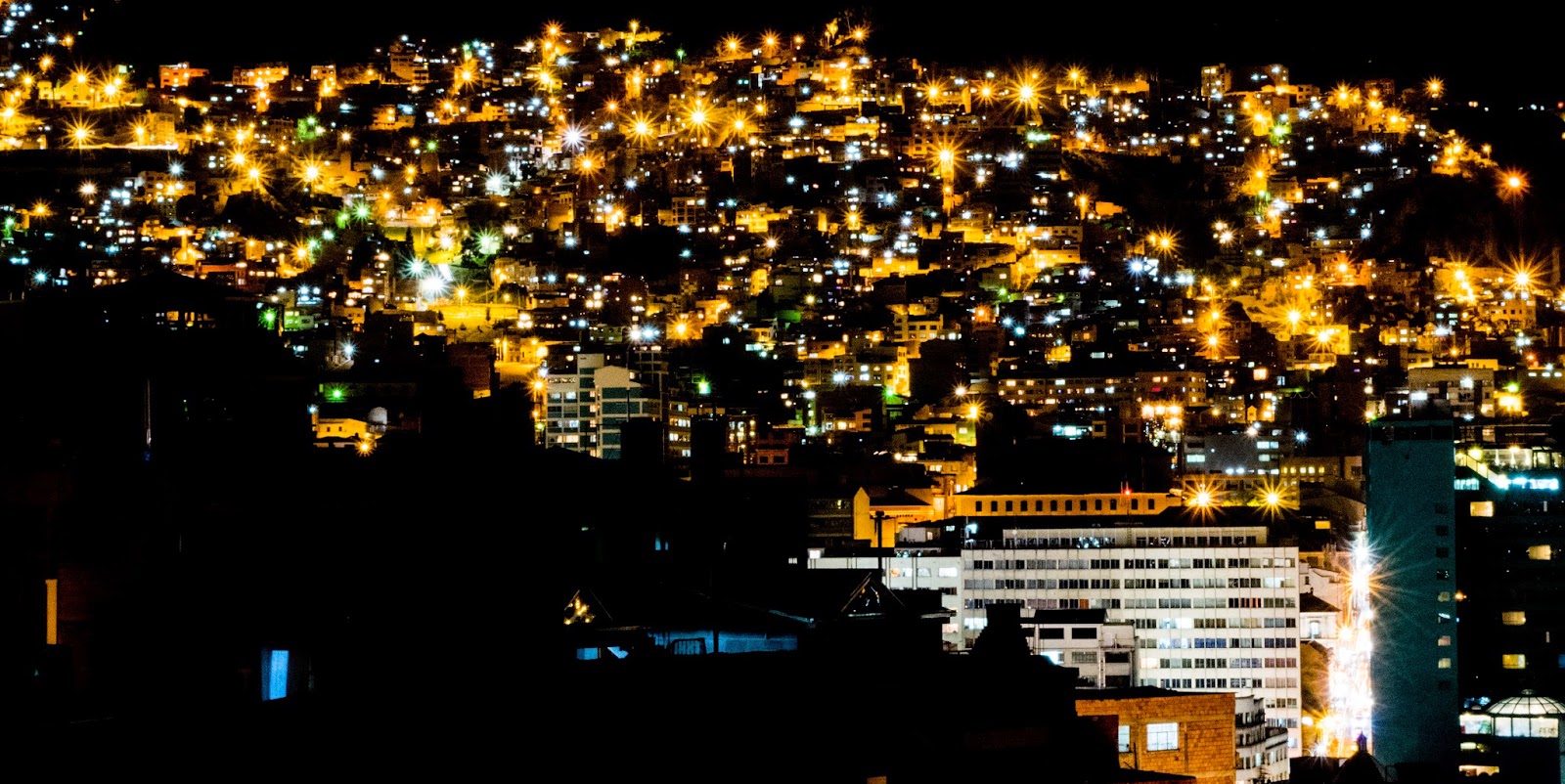 After draining a camera battery or two, it was put away. We watched the end of Star Trek, browsed the channels for a bit, then went to sleep for the sleep of altitude adjusting.

The thing about adjusting to altitude, it gets worse at night. As your heart rate slows, so does your blood flow with precious oxygen...
Posted by Colleen Speed at 9:19 PM