This Land, This Land Will Punish You


In Bolivia, you have you earn your waterfall. 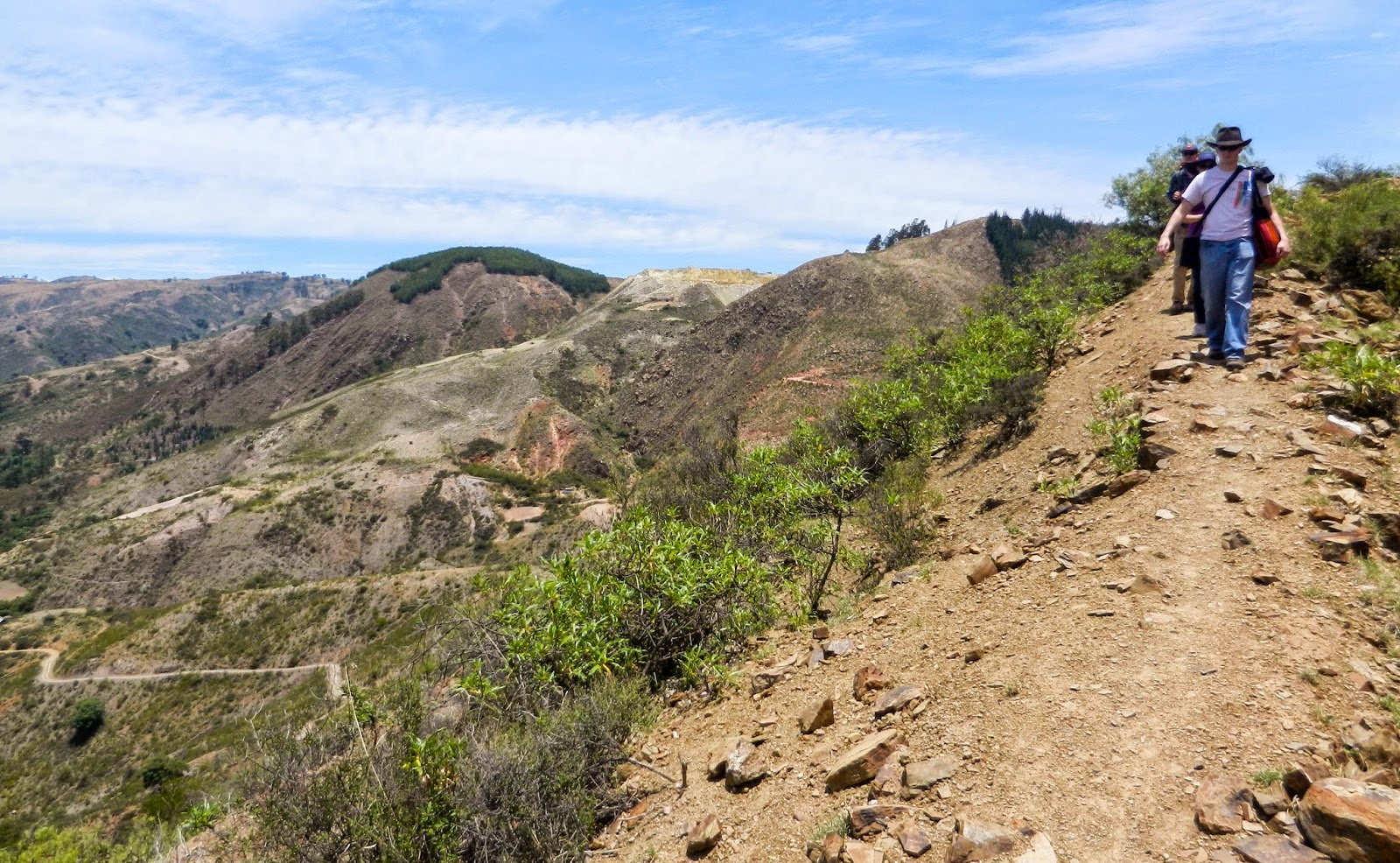 And we swear 10 km in Bolivia is measured differently than in the U.S. or Canada.

Our hike started from the dinosaur footprints. On the "urban" part of the hike, our guide lead us on thin paths beside traffic, often walking single file as pedestrians do not have the right of way in Bolivia. 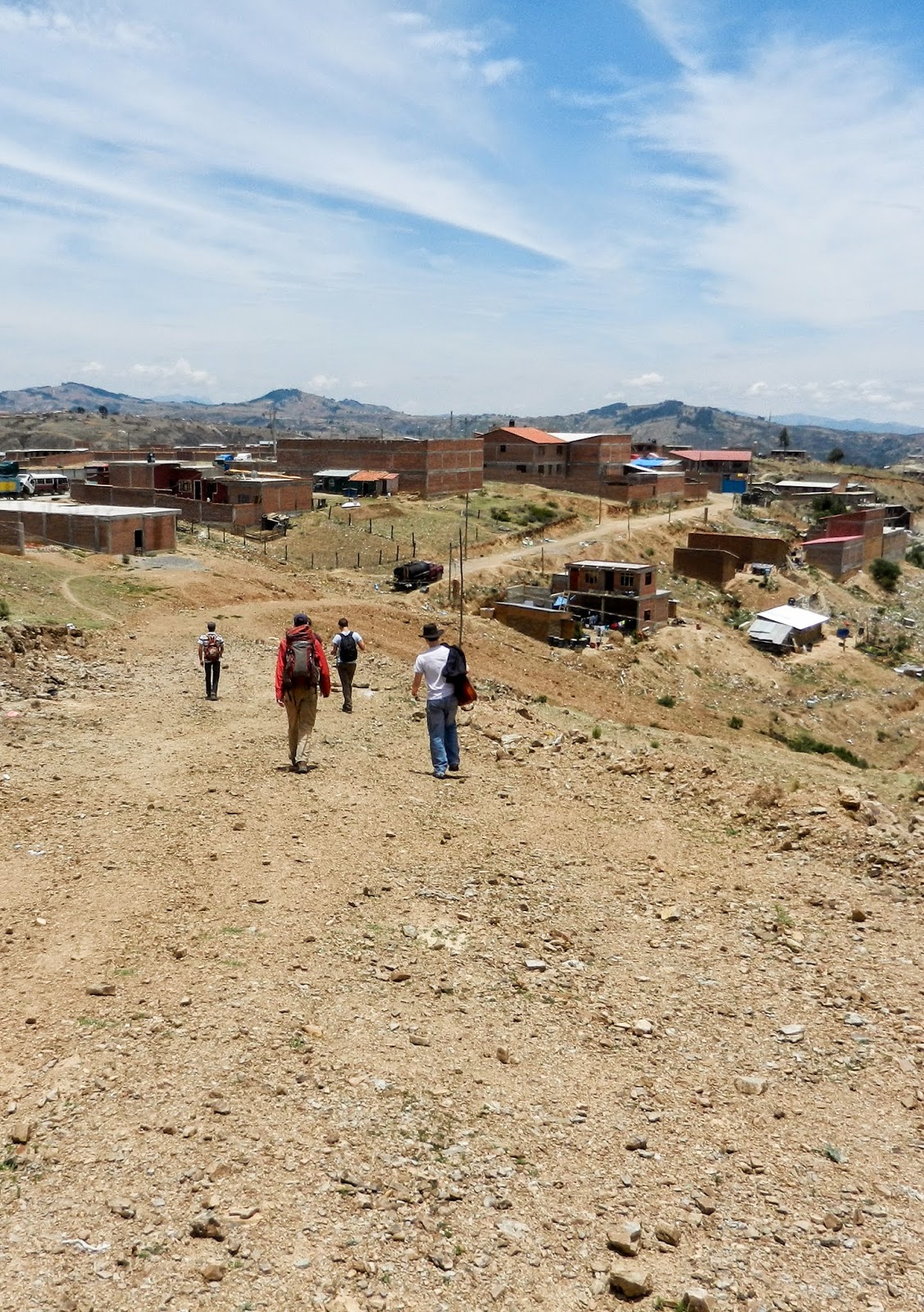 Walking through the outskirts of Sucre, we were descended upon by local pigs, 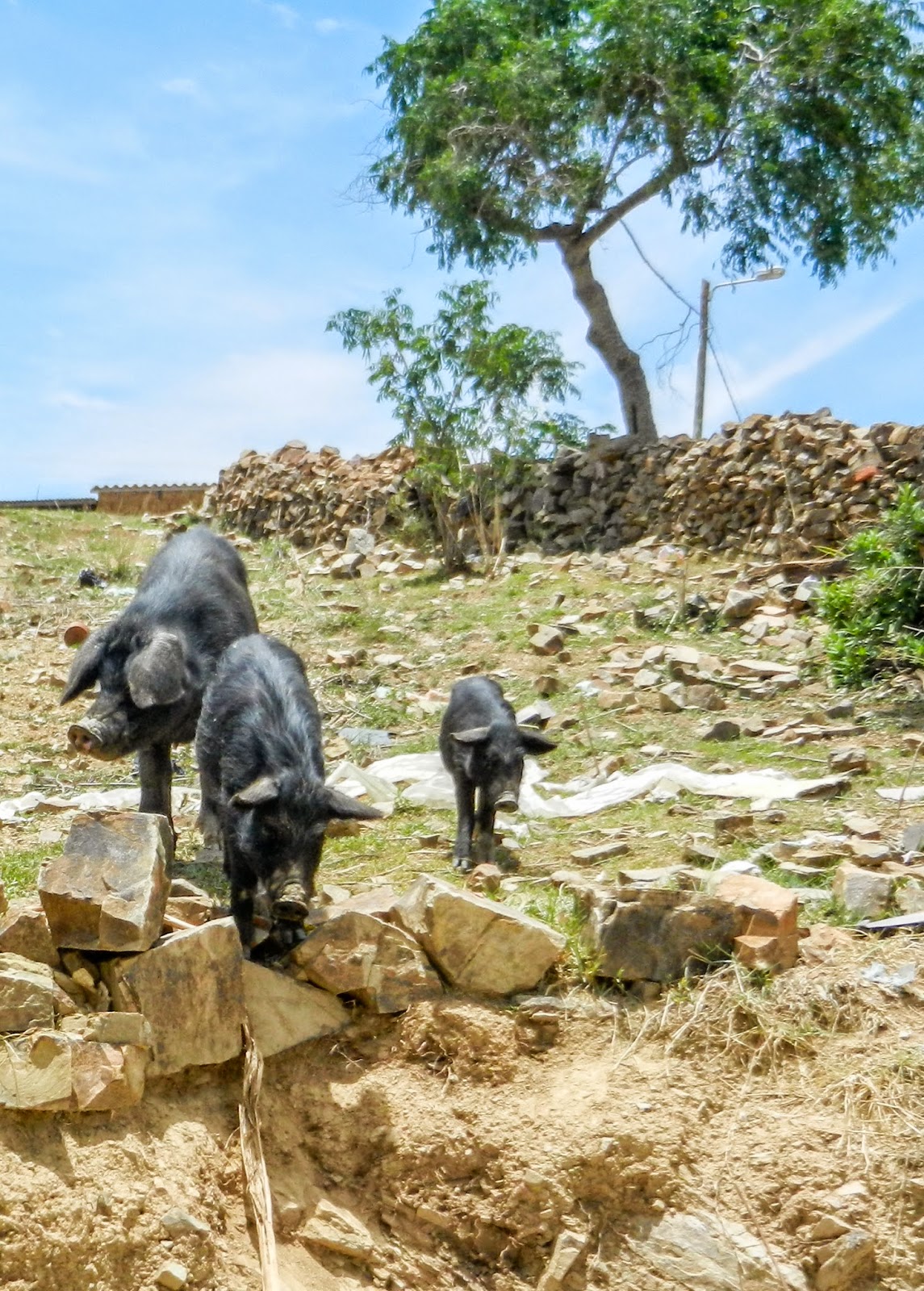 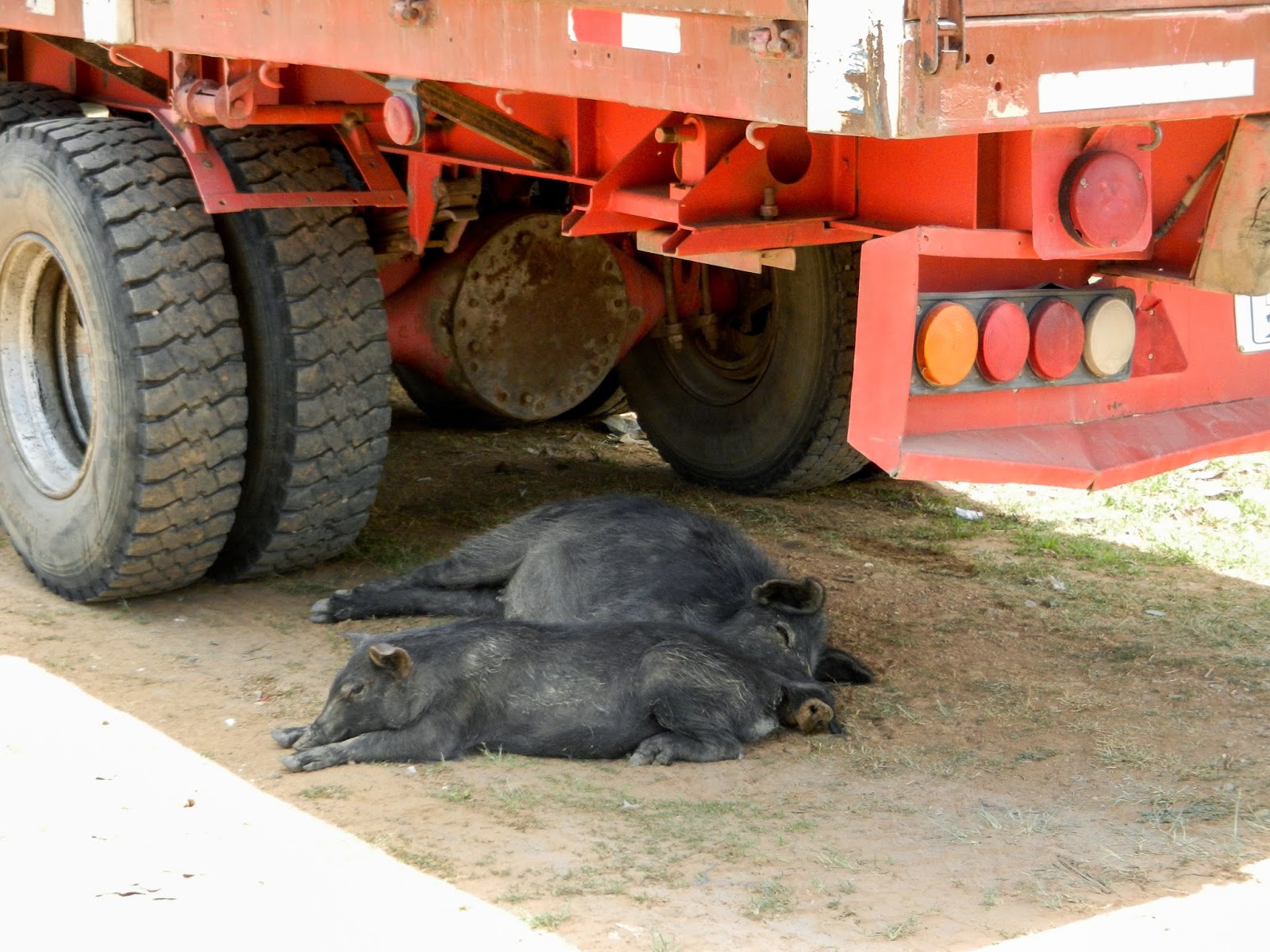 After about an hour of walking we left the residential area and started following a road that switchbacked down into a valley. 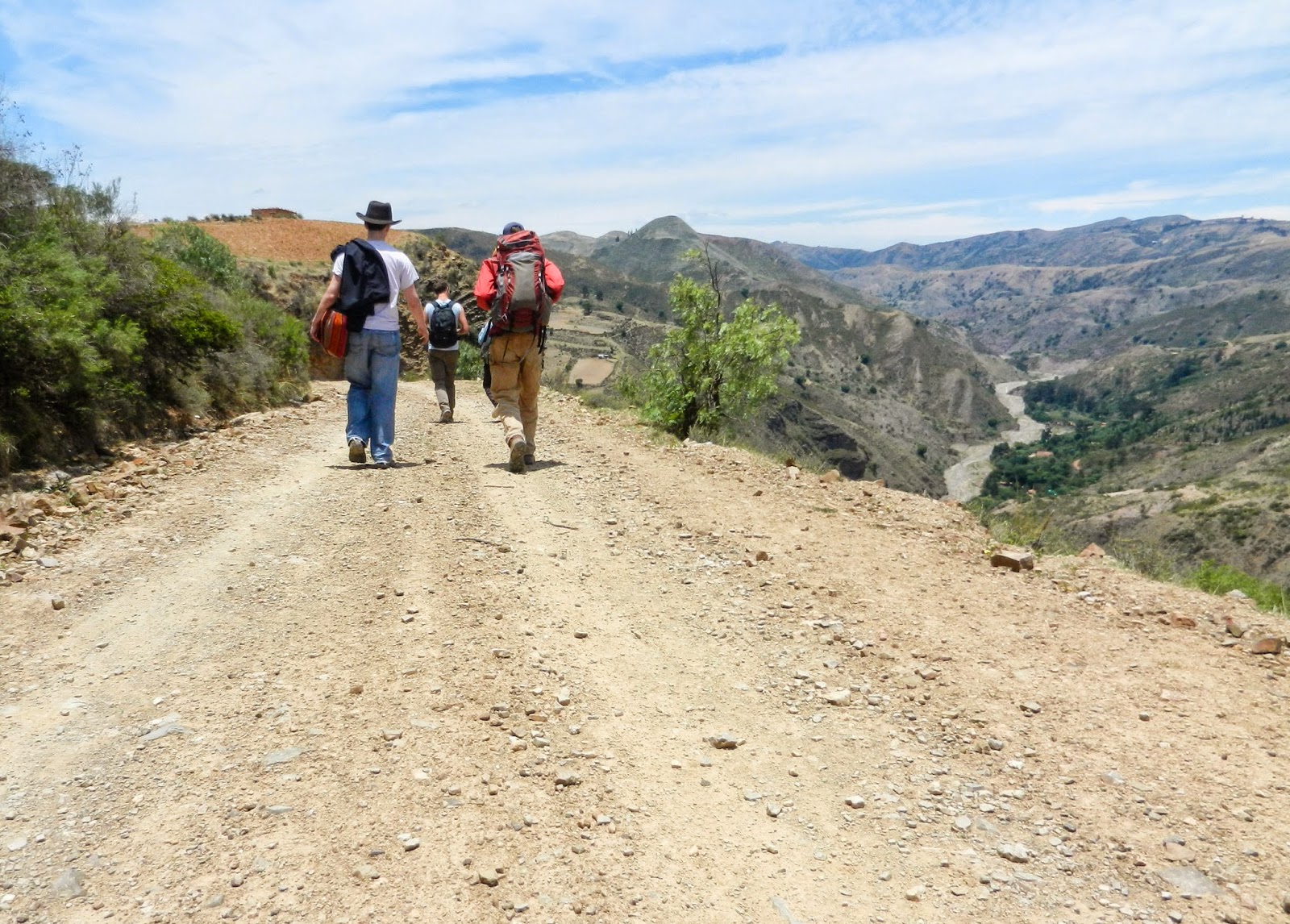 We soon left the "road" and at the first turn, our guide stopped us to warn that path down was full of loose rocks and narrow. We were instructed to not run and to watch our footing. 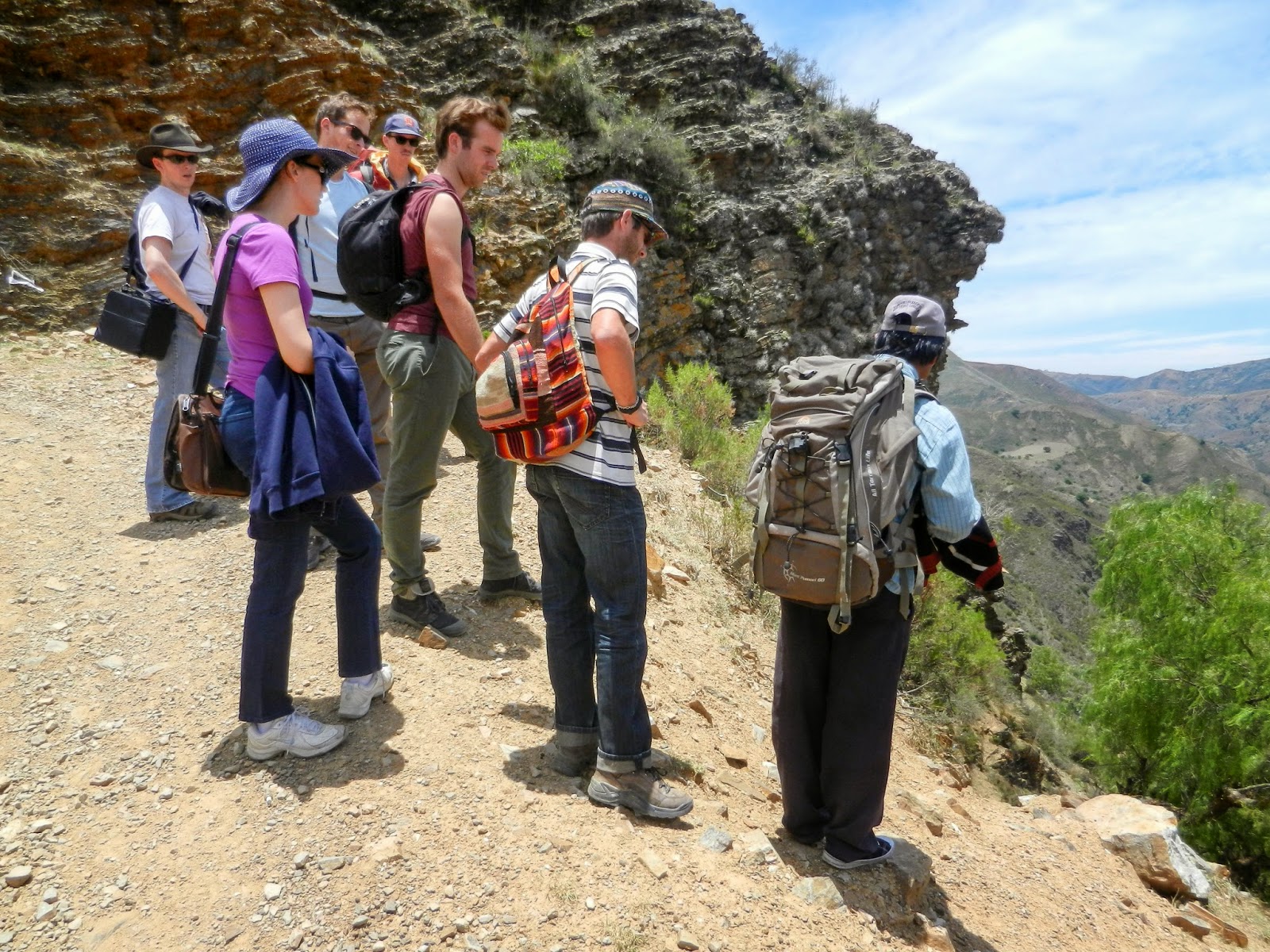 And it was a steep, long way down if you fell off the path. 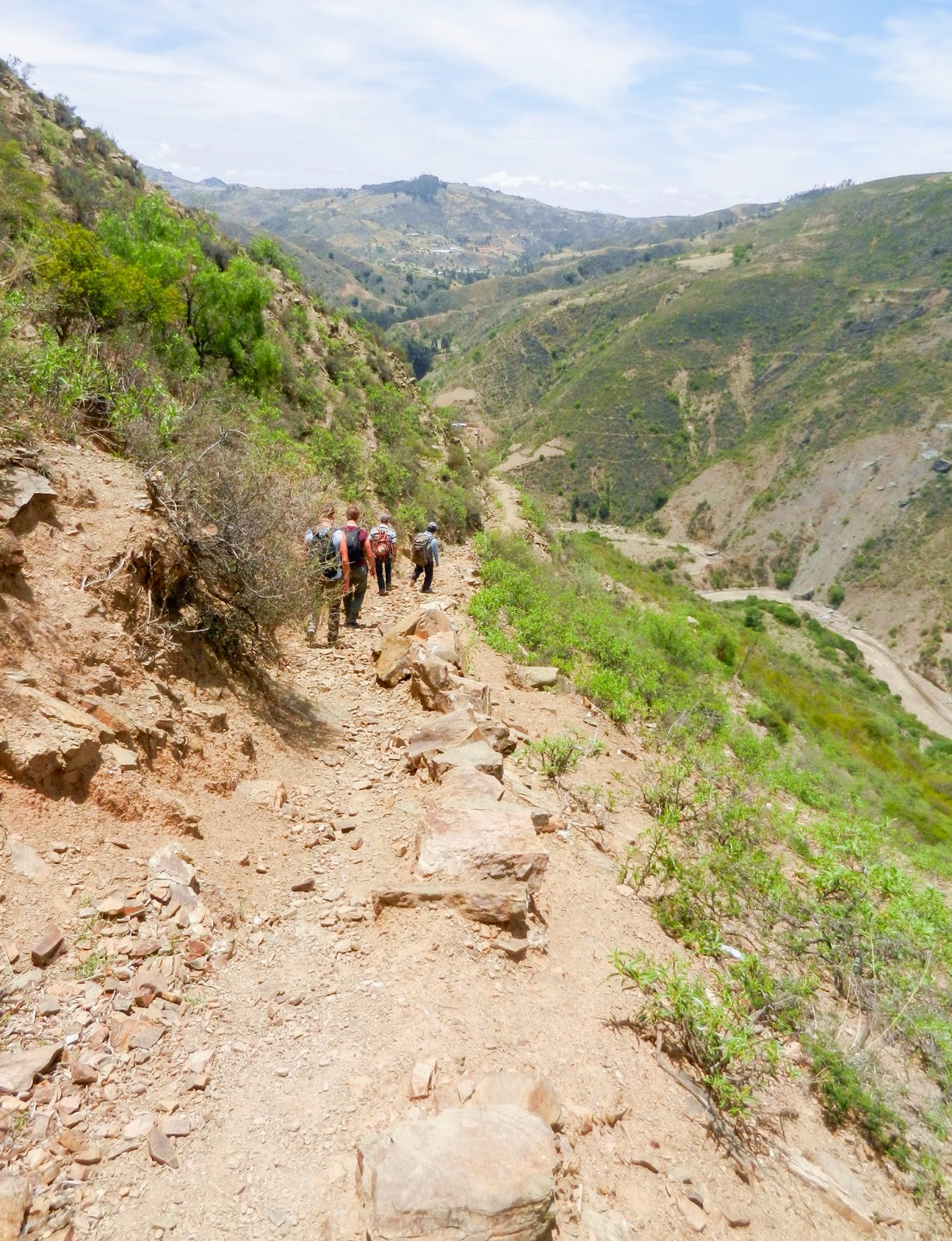 We (Colleen and Steve) both had hiking boots, but Karen was not as well equipped. Ever the chivalrous gentlemen, Steve helped Karen navigate the lose rocks on the path with shoes that had virtually no tread. 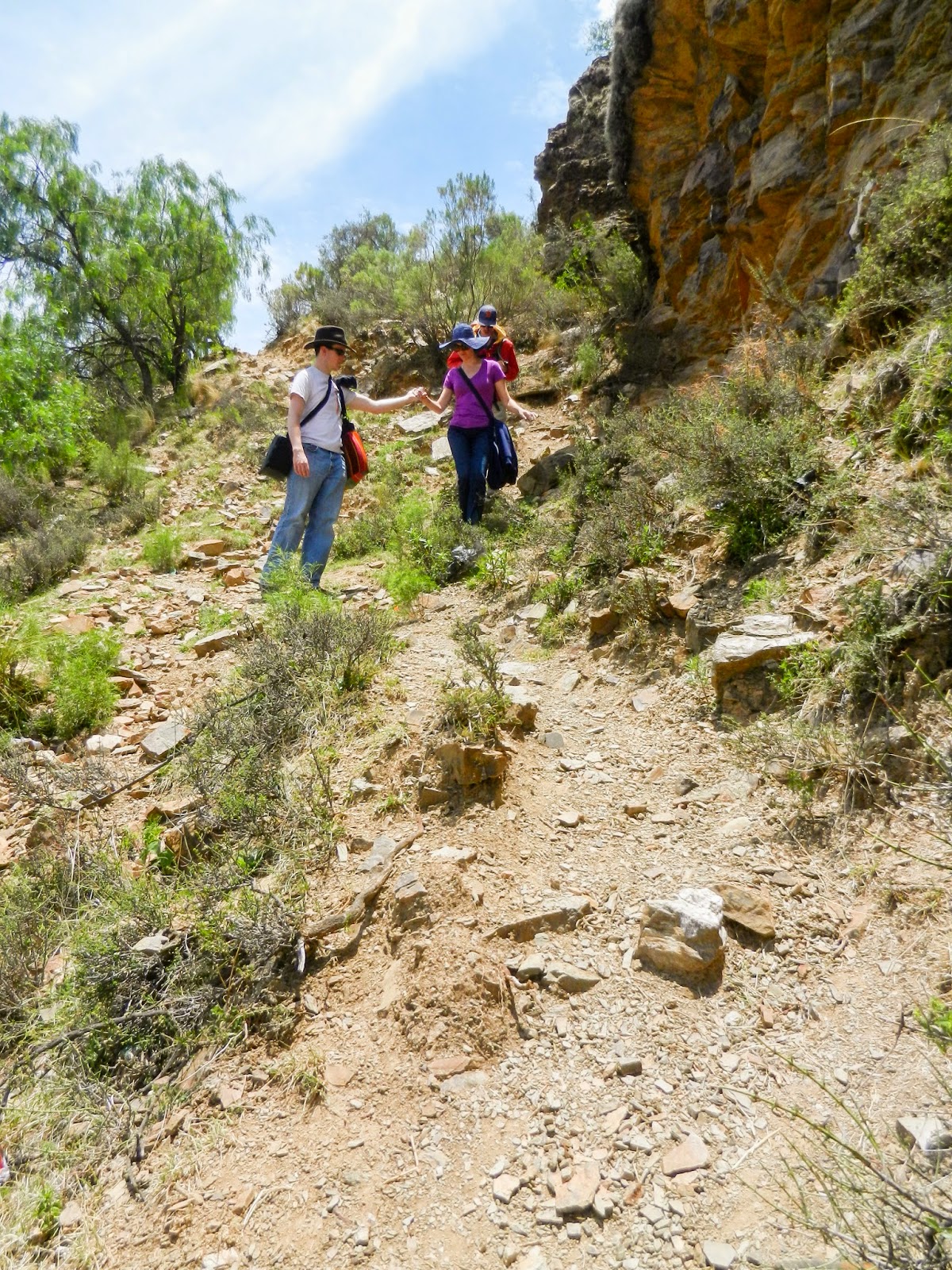 To make matters worse, Karen's shoe broke and part of her sole started flapping around. 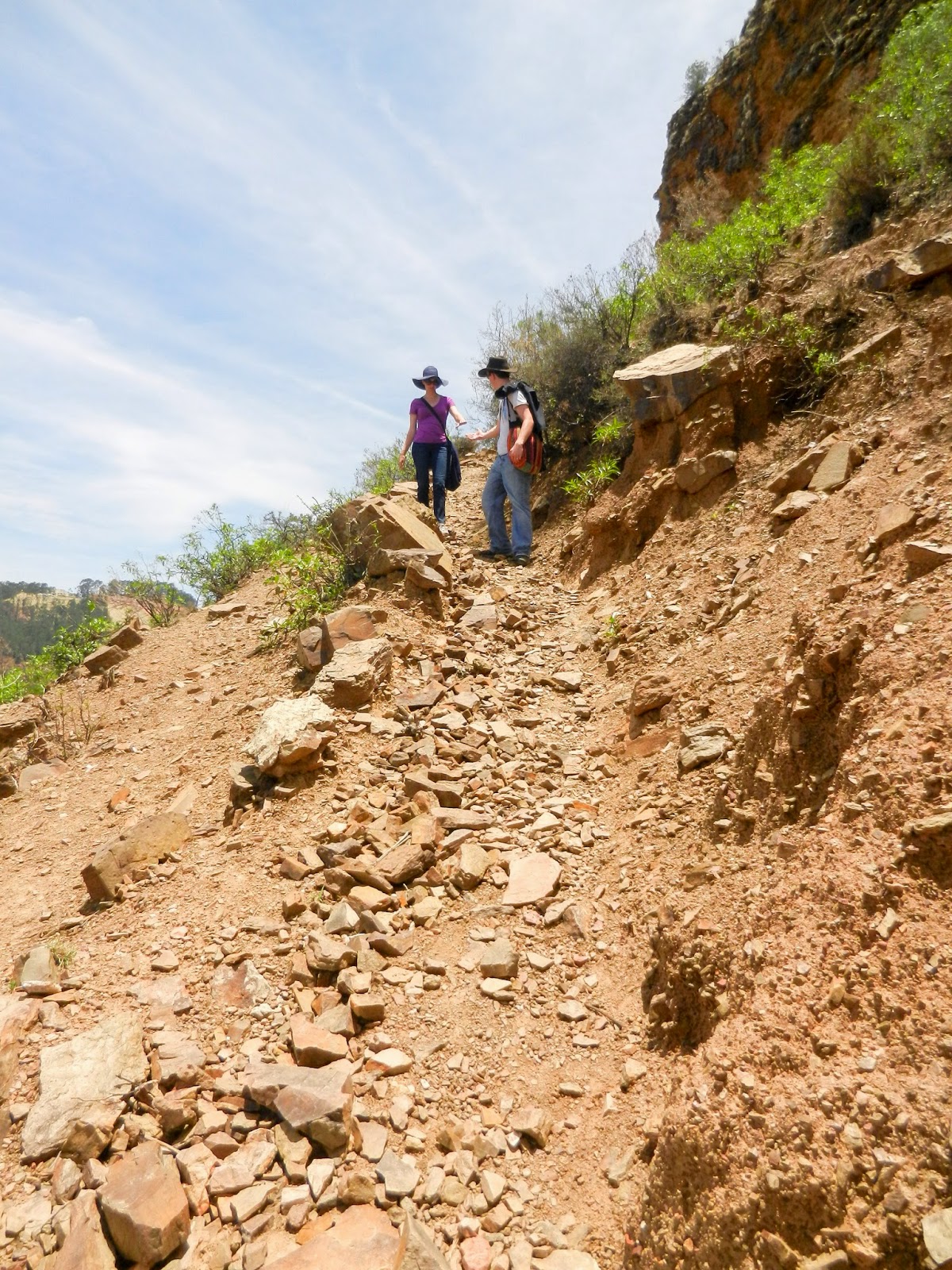 Meanwhile, fleet footed Colleen was in good spirits and taking selfies, when she was confident enough that she had enough space to turn her back to the cliff. 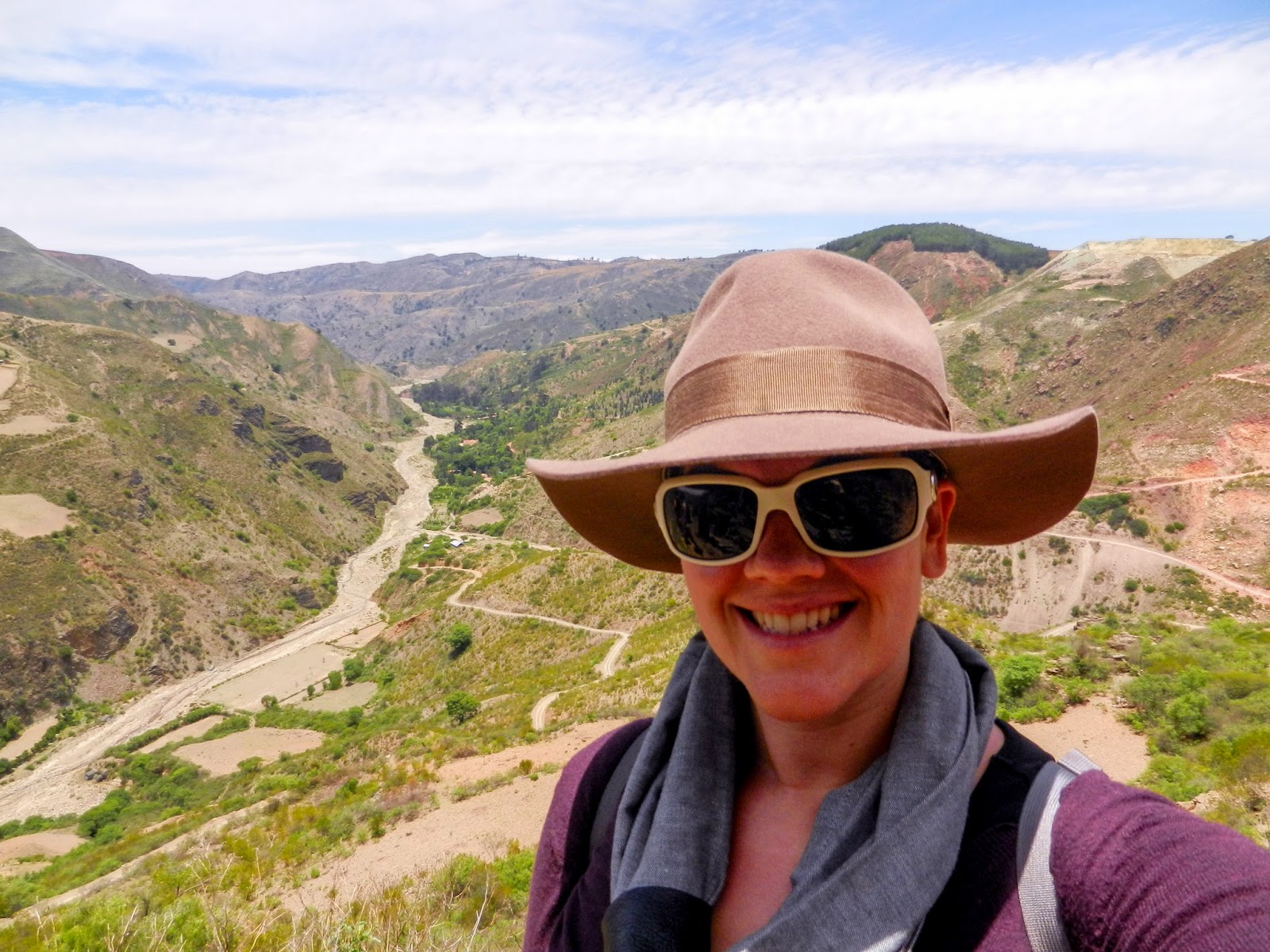 Near the bottom, our guide told us we would be having lunch at those trees. A grove of trees overlooking a stream waited for us (this was a lie, he meant another group of trees that took another 45 minutes to get to after walking in a dry stream bed). 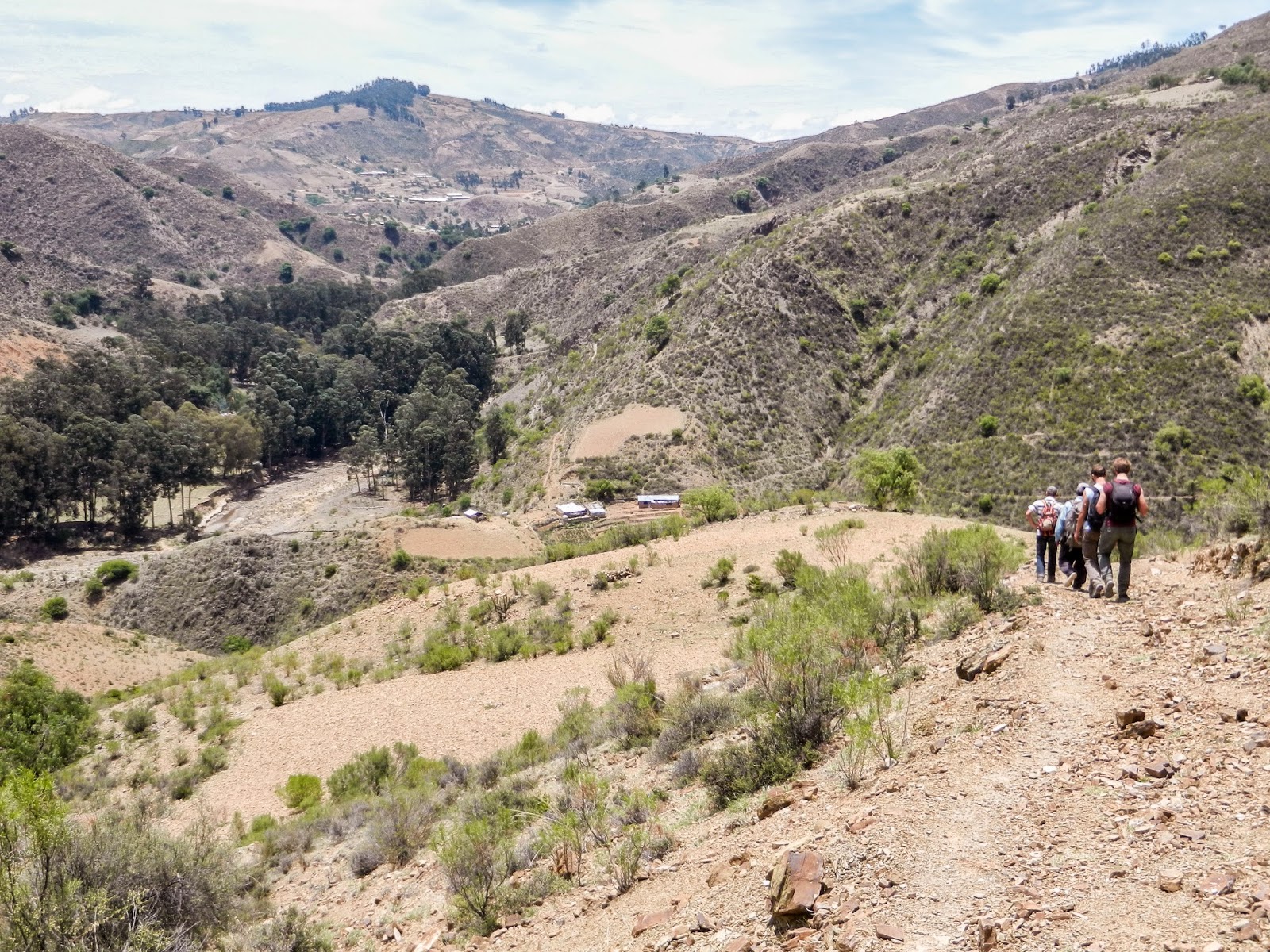 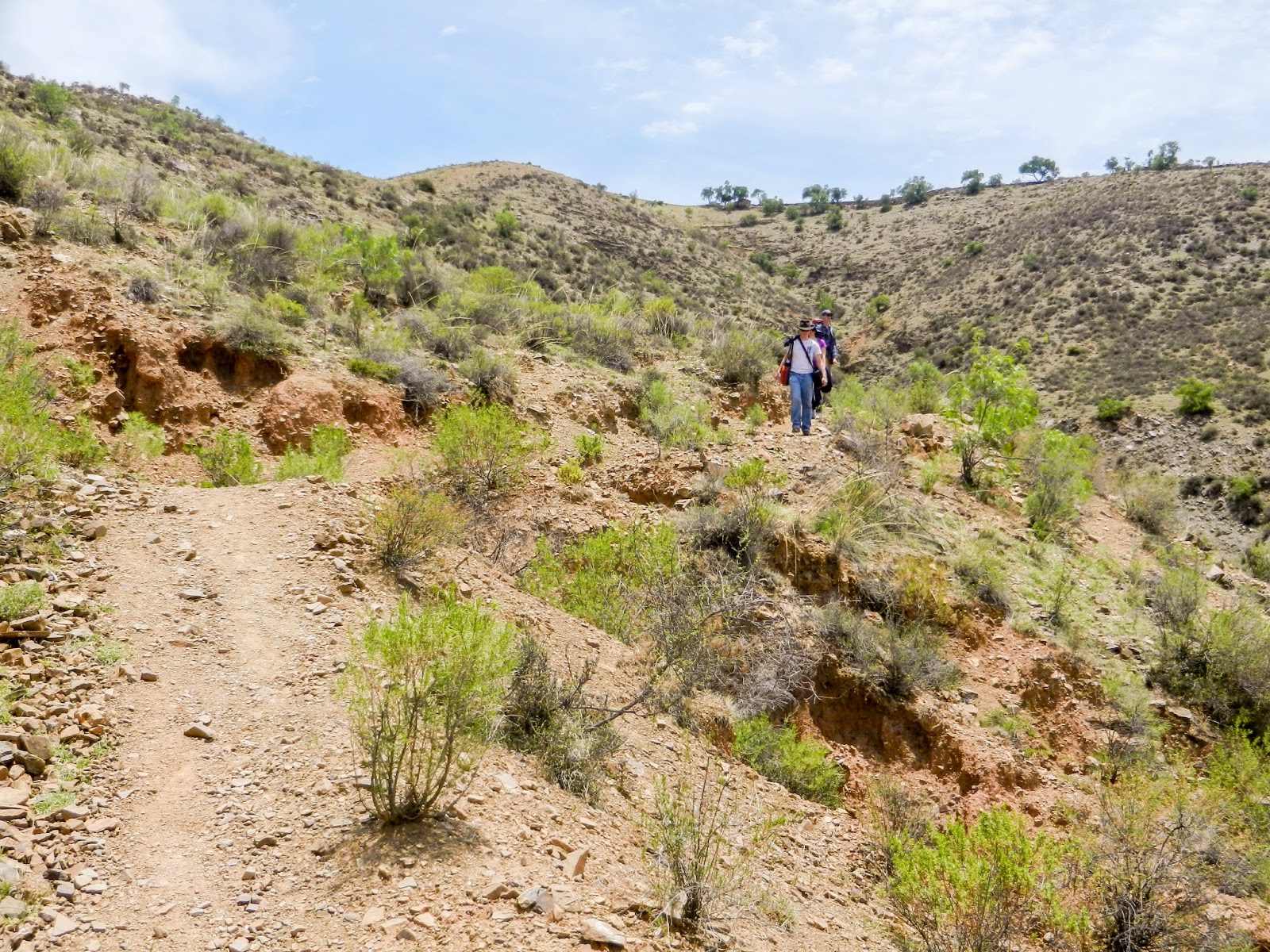 We encountered some very narrow paths where Colleen cheerfully navigated in order to turn around to capture Steve and Karen's crossing. Turns out a hike in Bolivia means using donkey paths.

You know what we aren't? Donkeys. 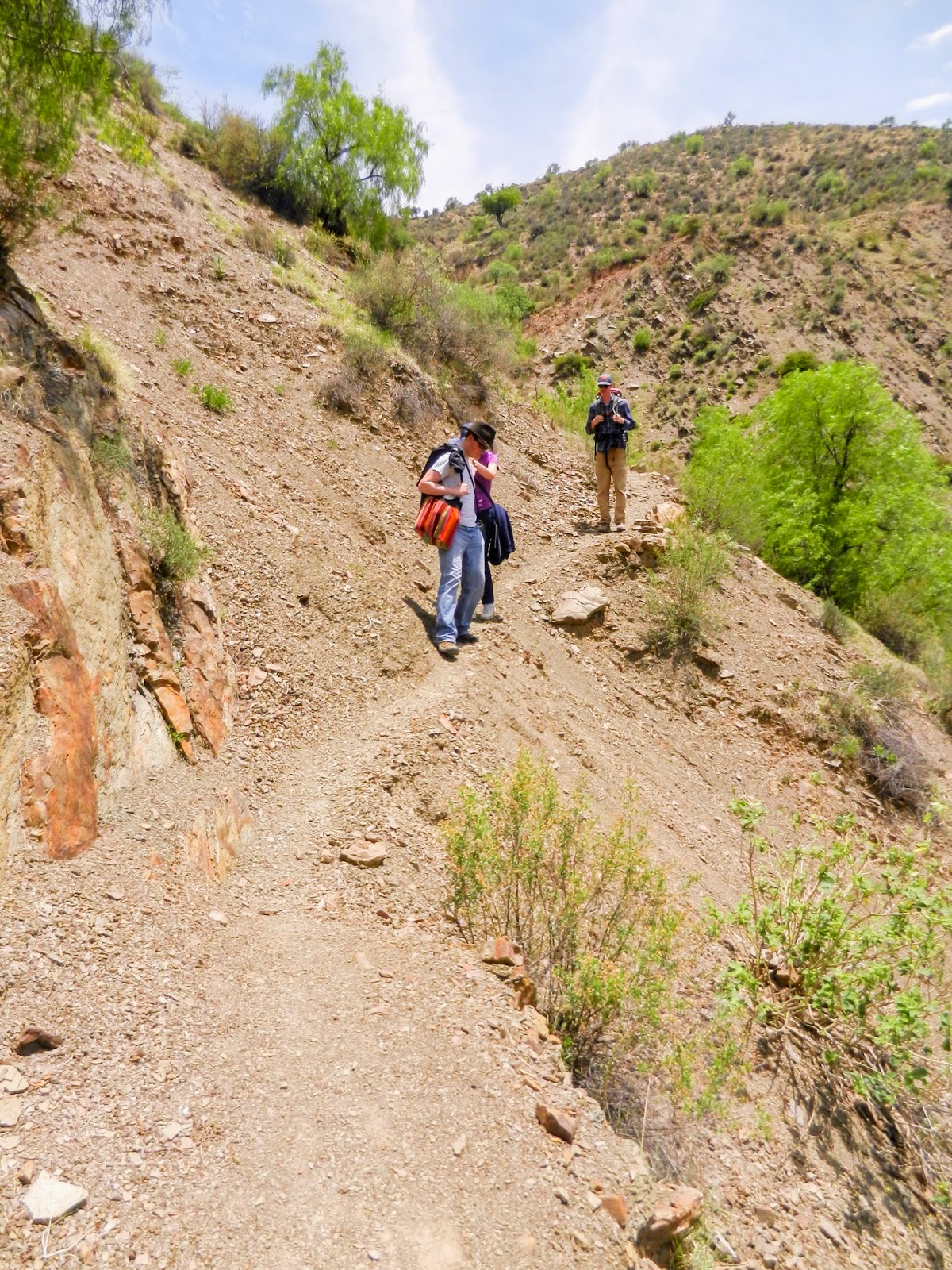 Karen's shoes held out for almost the whole slope. We were nearly at flat ground when her tread finally fell off. This actually improved the tread on Karen's shoe! 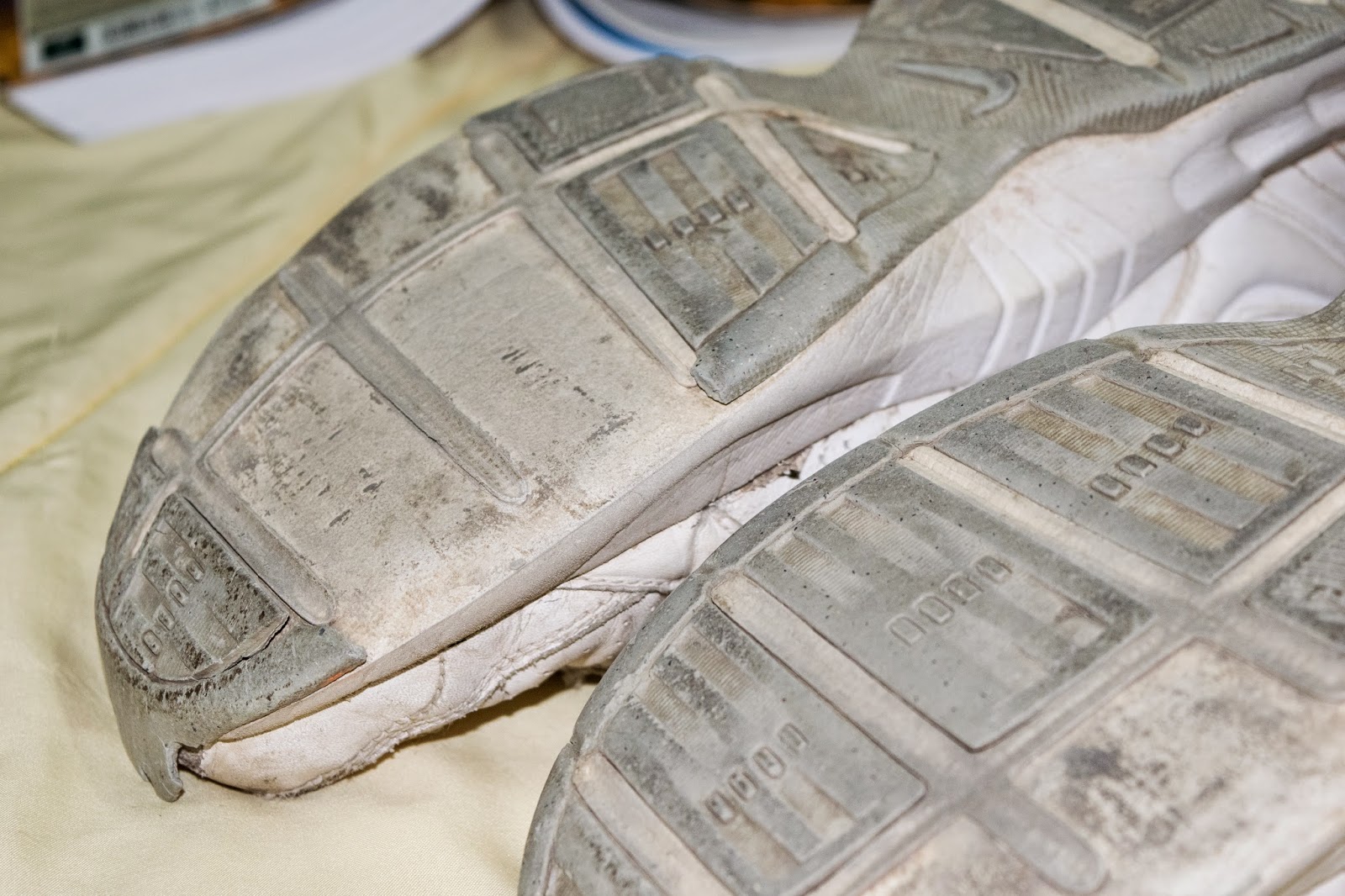 At the river at last, we looked forward to food, as we must be nearly done the hike. 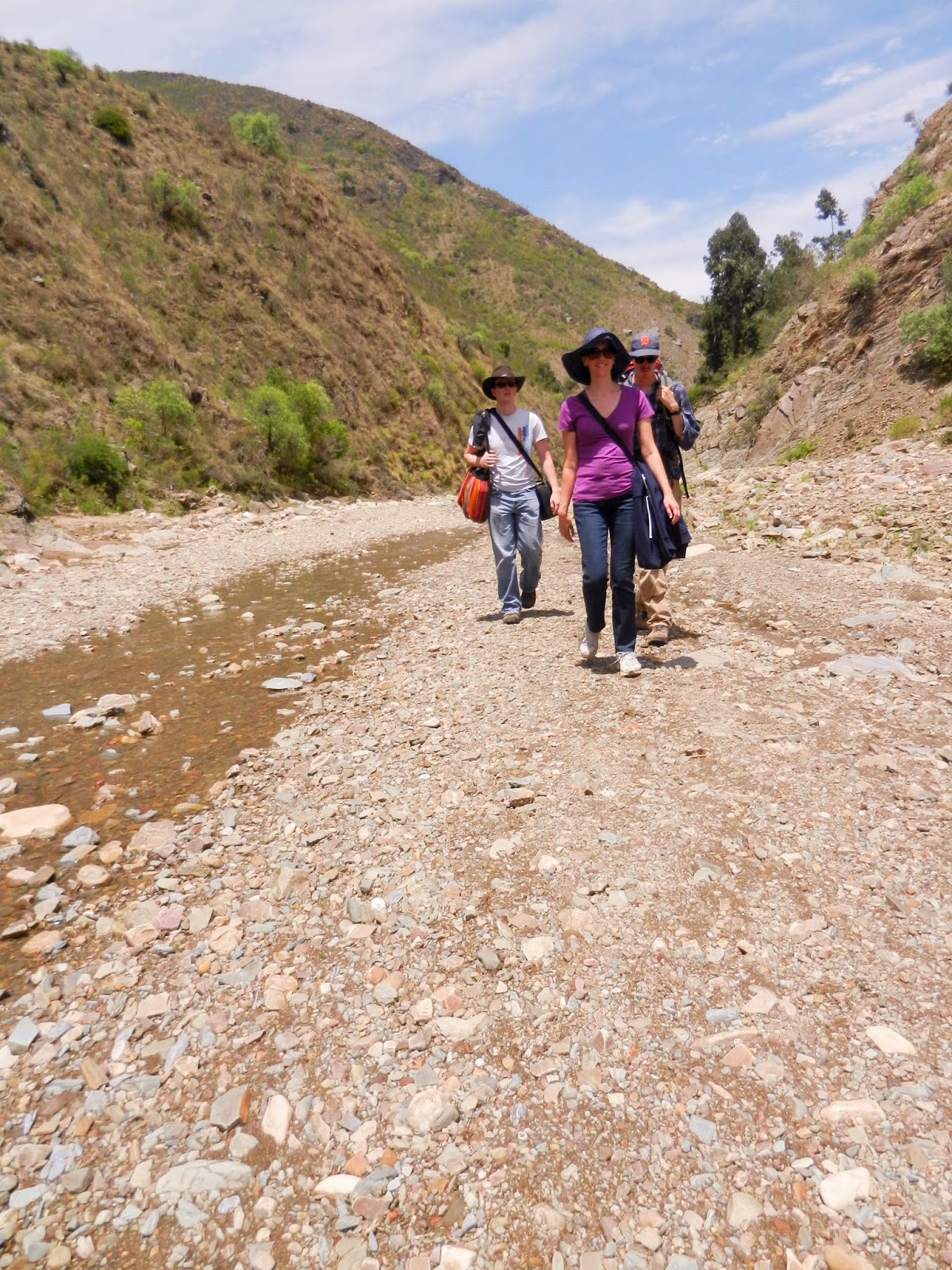 Steve said hello to some donkeys. Having himself carried many bags, been sure-footed down the narrow steep slopes, always been able to find his way home, and not able to speak the language of the humans nearby, he considered them brothers. 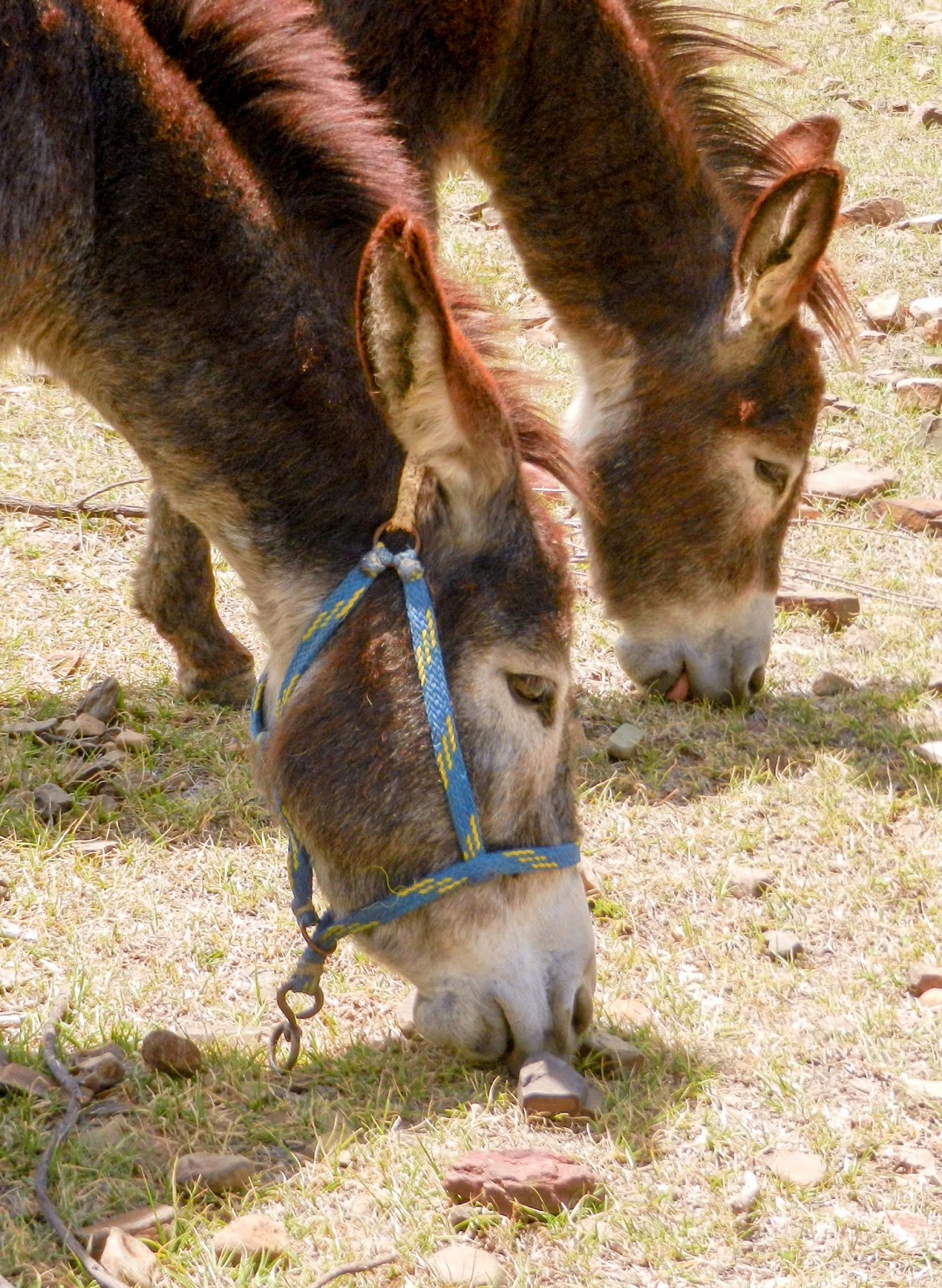 We stopped for lunch on the edge of the river gorge, under some eucalyptus trees. We were too tired to take pictures, so you'll just have to imagine us sitting there, eating, with Steve grumbling because a bird pooped on his leg.

After eating, our hike cut along side and through some farm land, with old walls around some pastures. 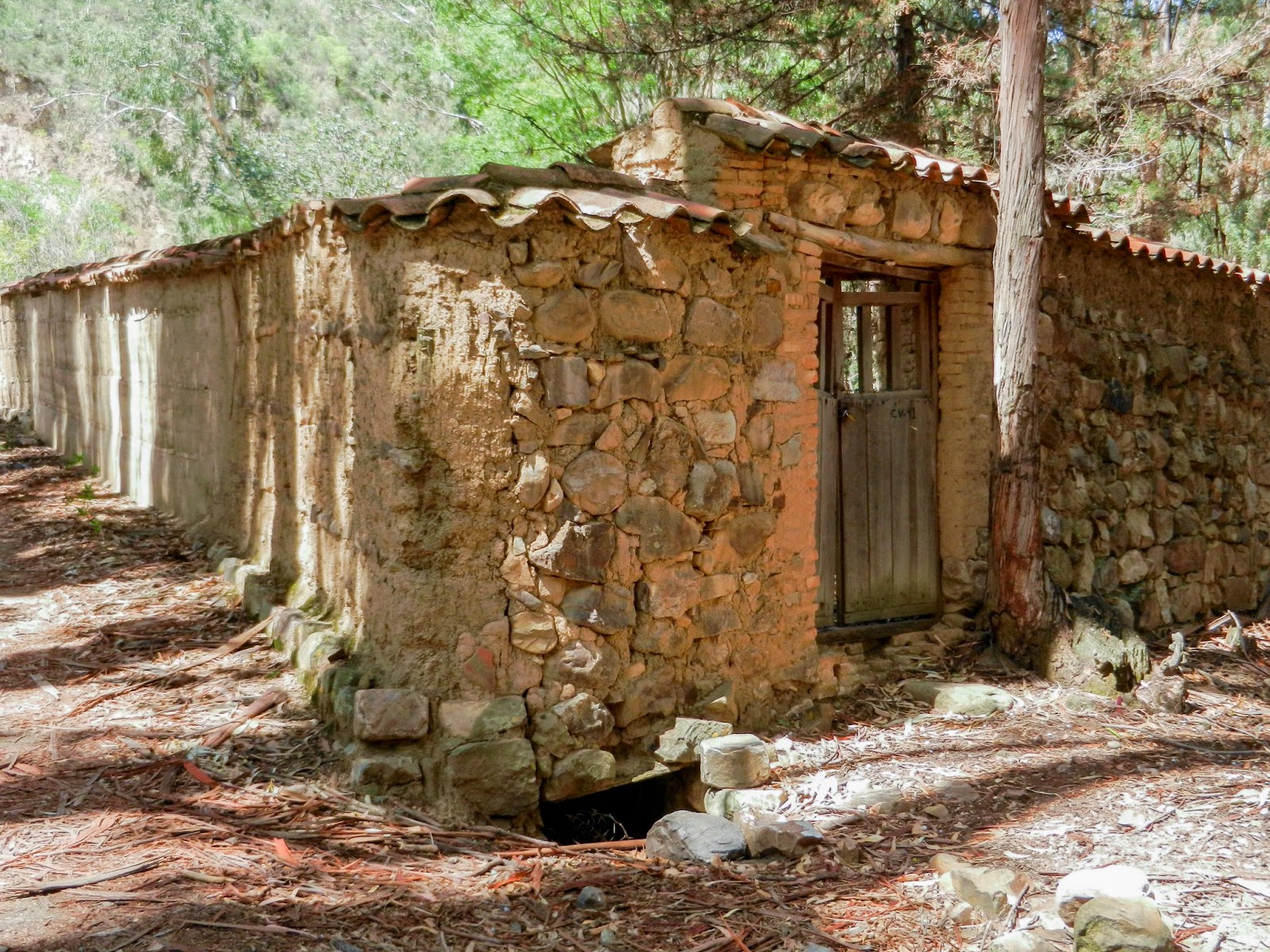 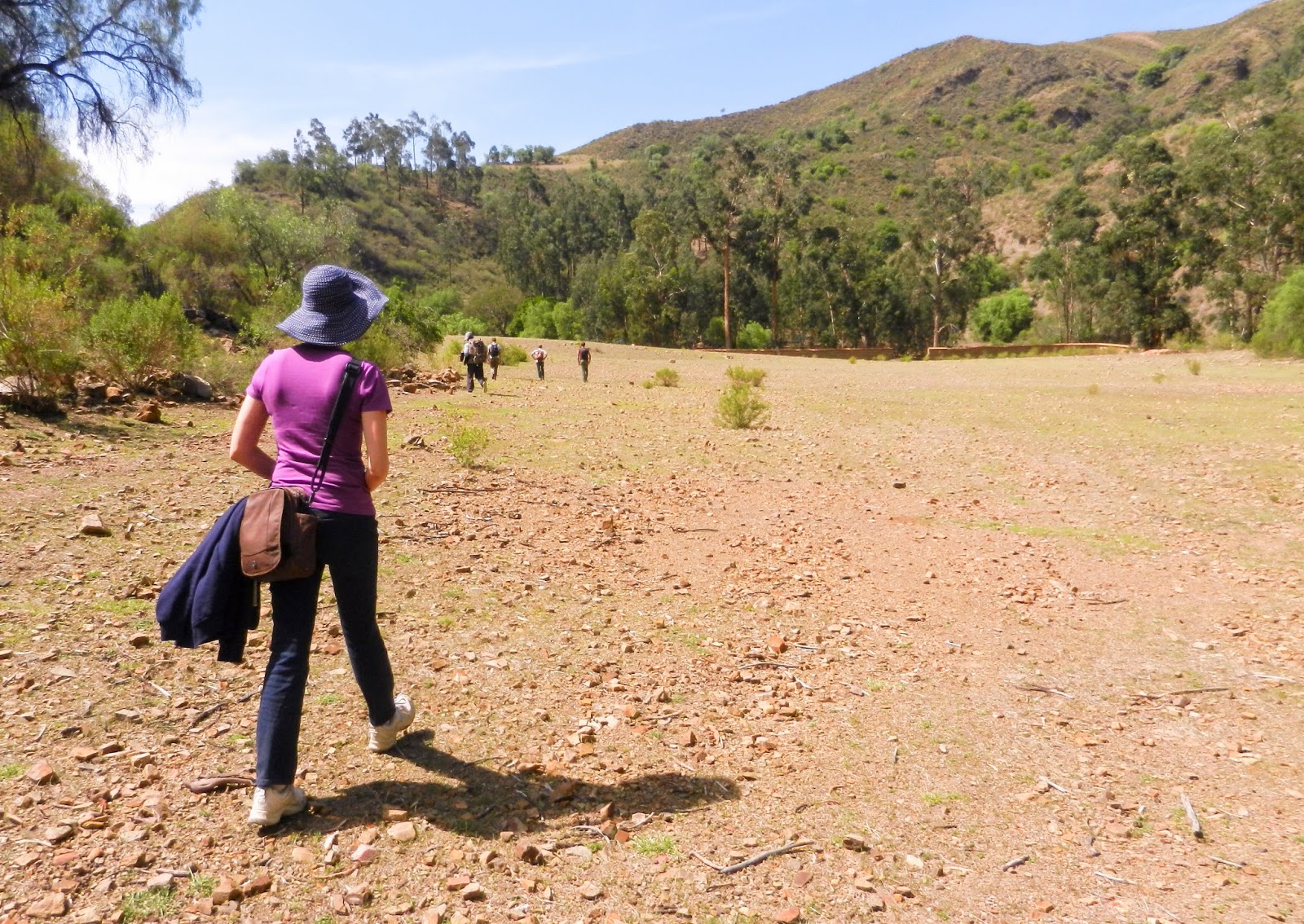 The sights were interesting, and we were still hiking. 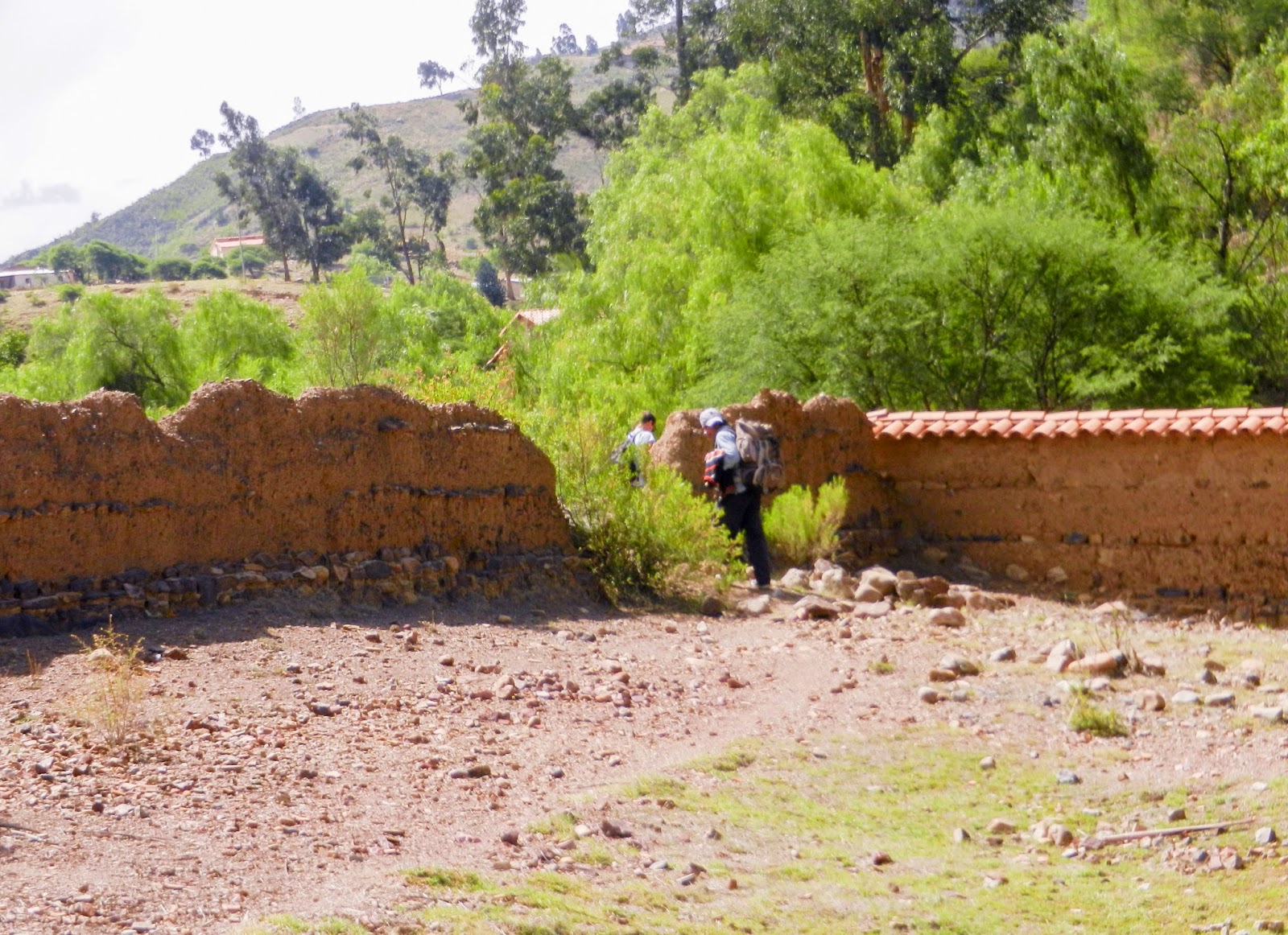 We were walking a Bolivian pace. Which is another unit of measurement that does not equivalently convert for our western minds. 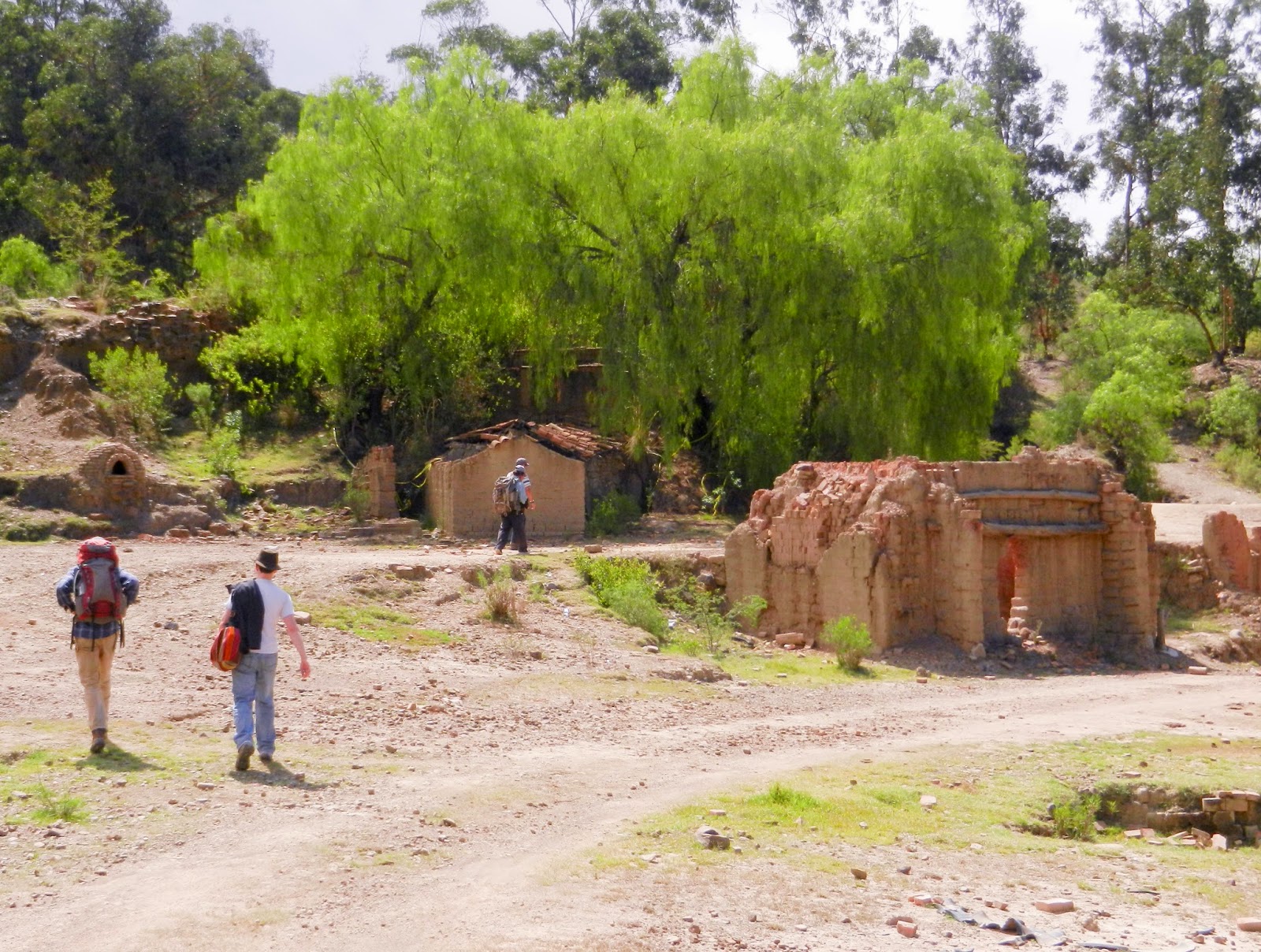 Karen taking a much needed rest, looking back at where we came from. The white cliff in the distance is the dinosaur footprint wall, and that pasture is either very steep and long, or by this point we were getting tired. 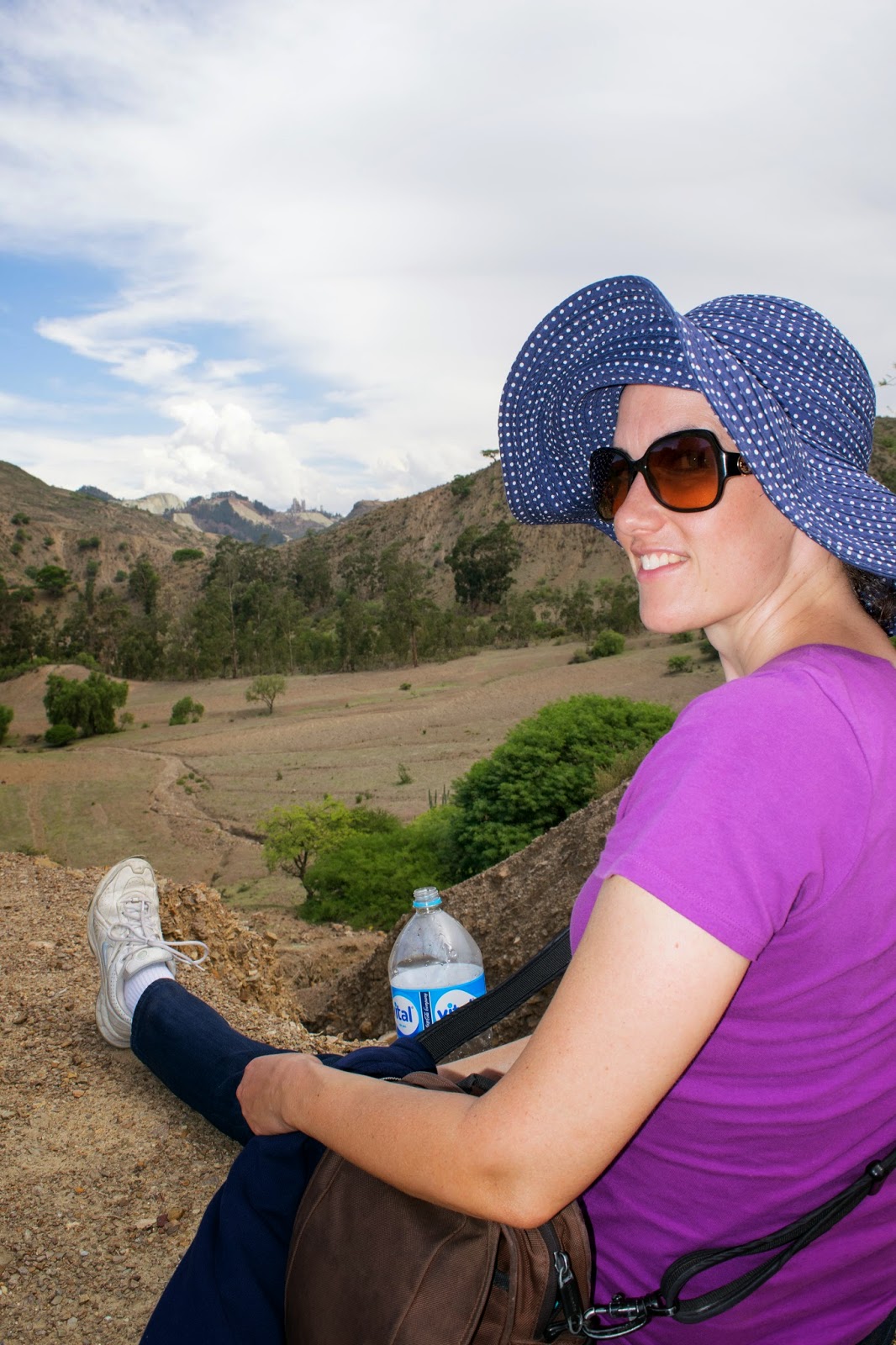 Seriously, the climb up from the field to where we rested felt like the hardest part of our hike so far. The land was punishing us. In Bolivia, you earn your waterfall. We were out of breath, partially because of the altitude, mostly because of the terrain. To regain our strength, we took a 10 min break, had some water, and had energy gummies. With an uneven number of gummies, Steve insisted the only fair way to choose who gets extra was rock-paper-scissors. Steve lost. This would become a theme in the following days 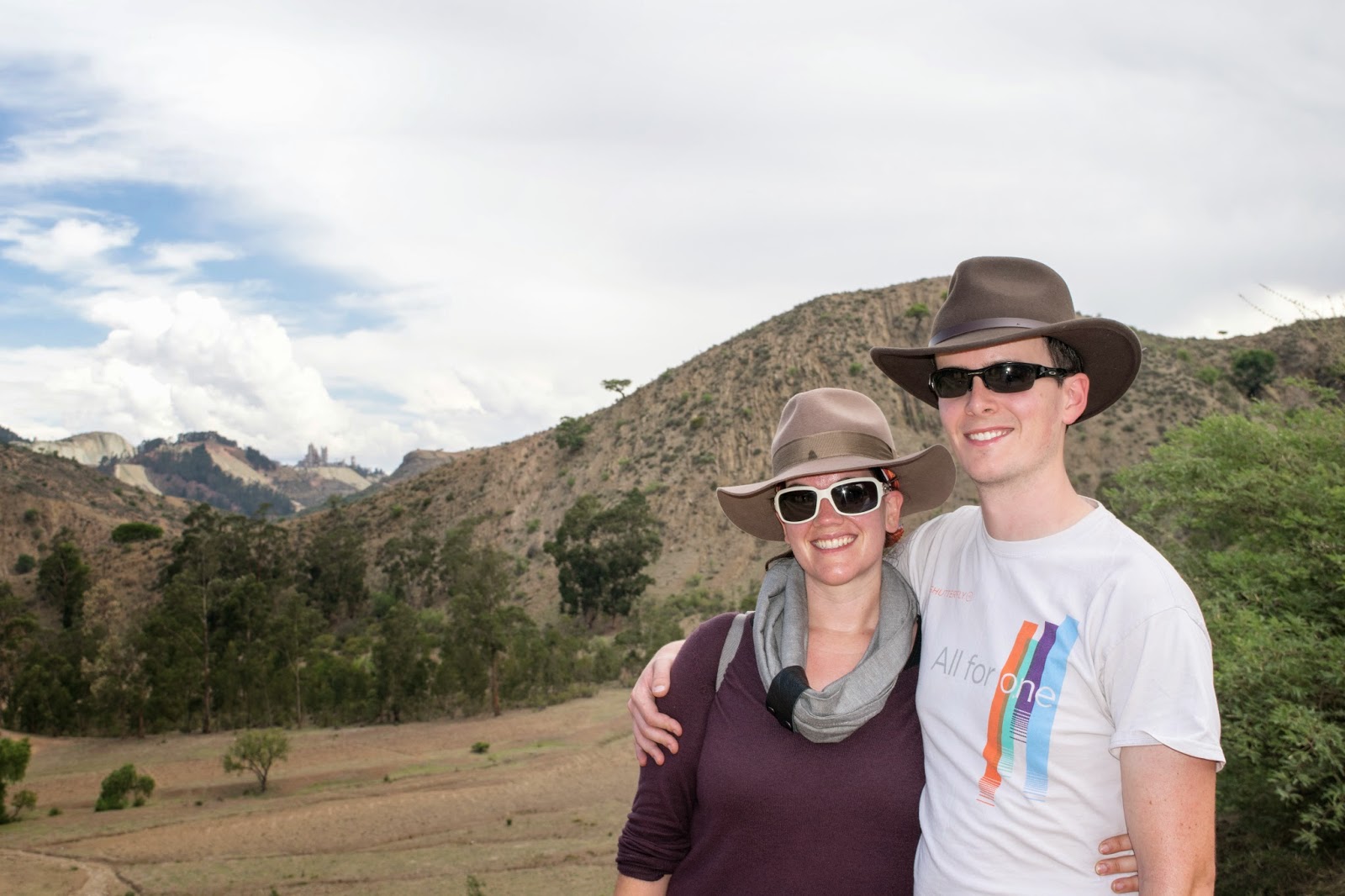 Relatively soon after that, we came in sight of the waterfalls. The one visible in this picture is the second lowest of at least 4 falls. 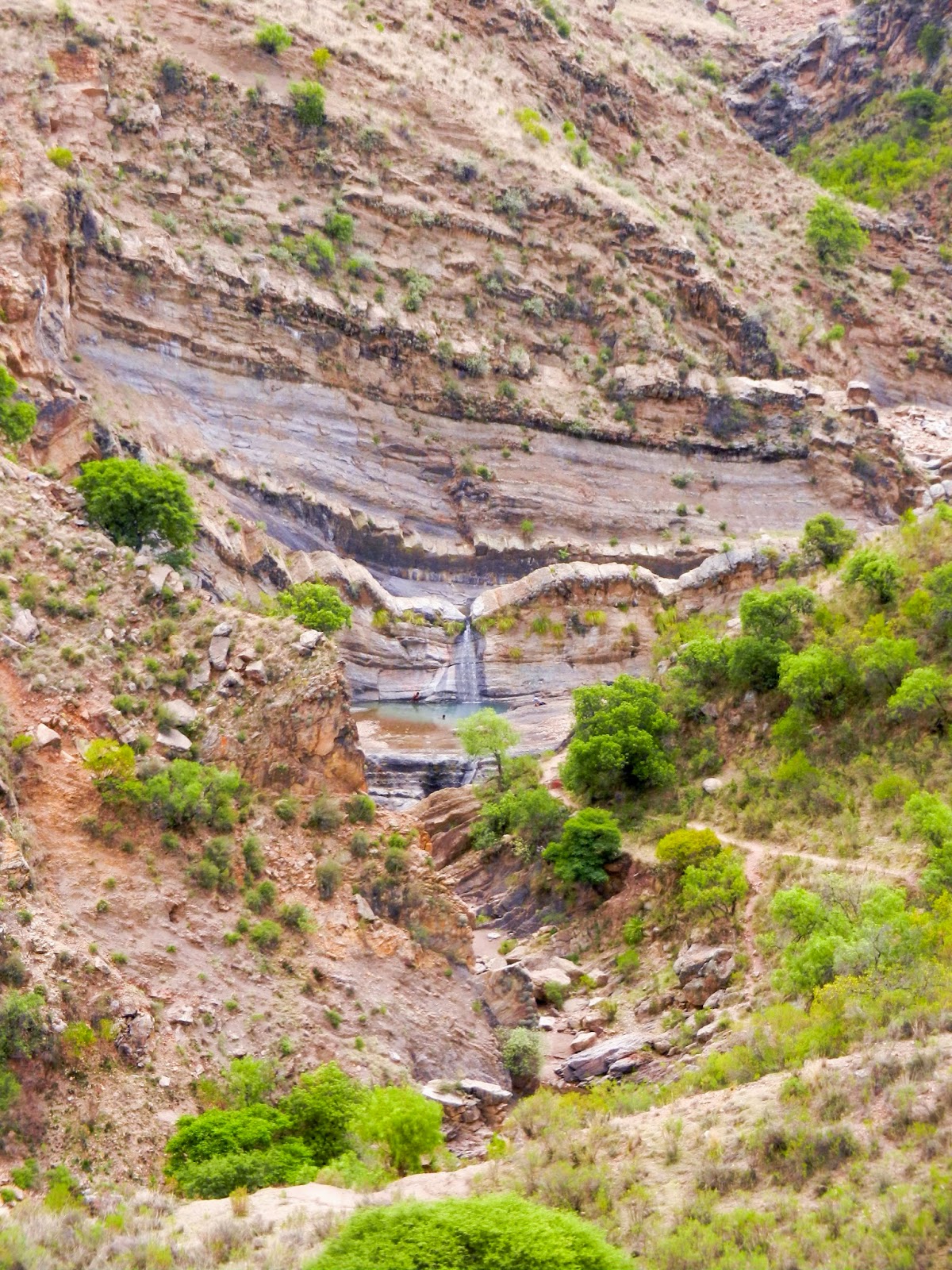 Having completed the 8 Bkm (Bolvian km) hike to the waterfall, we got changed (behind makeshift towel screens) and hopped in. The water (the COLD water) reminded us of Canadian northern lakes, where you swim not because it's nice and warm, but because it's not dangerously cold.


You swim on principle, because you can. 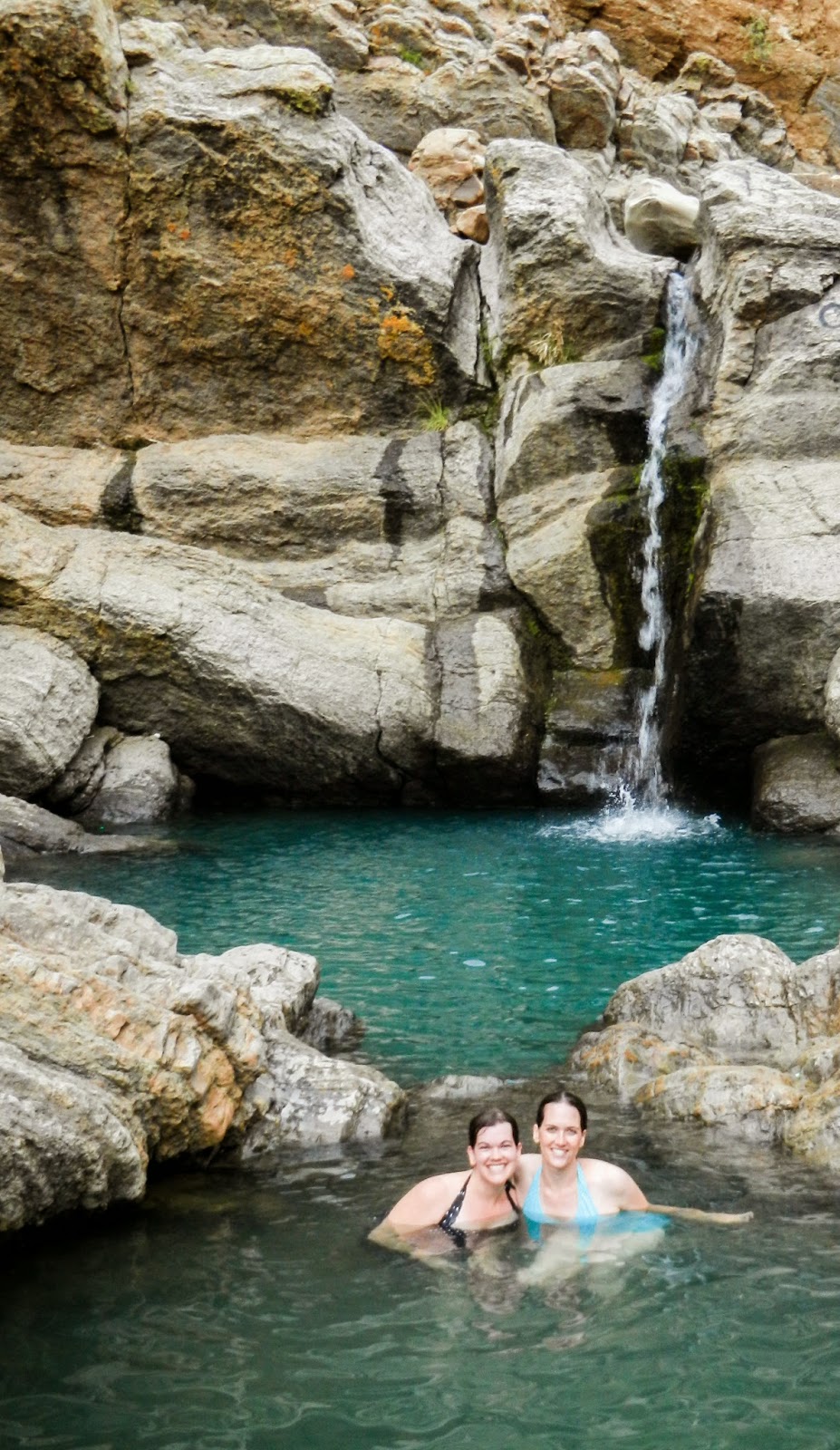 Only one of the other four hikers in our group bothered to get in. It's like you just walked 8 km to a waterfall and didn't go swimming "because it's cold". We swam on principle because we had EARNED it.

The water we swam in was the third pool up from the river. The hiking path led to the second pool, where we had to climb up about 1 story of rocks to the third one for our swim. The falls behind Colleen and Karen in the picture leads up to the fourth pool, but by this point Steve was too shaky and tired to want to climb any more cliff faces.

With a distant thunder, we noticed some dark clouds on the horizon, and decided it was time to get going. The Speed girls, having been trained to LEAVE THE WATER! when there was any possibility of lightning, hopped out and got changed. We prepared to hike the remaining 2 Bkm to a bus stop that would take us home.

If we thought 8 Bkm of donkey trails that climbed up and down (but on average went down) was tough, then 2 Bkm of constant uphill to get out of the river valley was a new level of problem. Colleen managed alright, but Steve and Karen lagged behind. By the end, Steve was pushing Karen up some of the steeper parts.

Some local kids who had been swimming at the falls easily passed us, then sat on the top of the hill to watch. They seemed entertained, and Steve assumed the following was a common conversation: "Hey, I'm bored. Want to go watch some out of shape tourists struggle up the hill?" "Yea, that sounds funny!"

Having "defeated" the hike (by this I mean we didn't die of exhaustion), we took the bus back to the town square. We grabbed some more quinoi soup and potatoes for dinner, then took another bus back to Isabelle and Amanda's. One shower later, and we were having tea and getting sleepy. 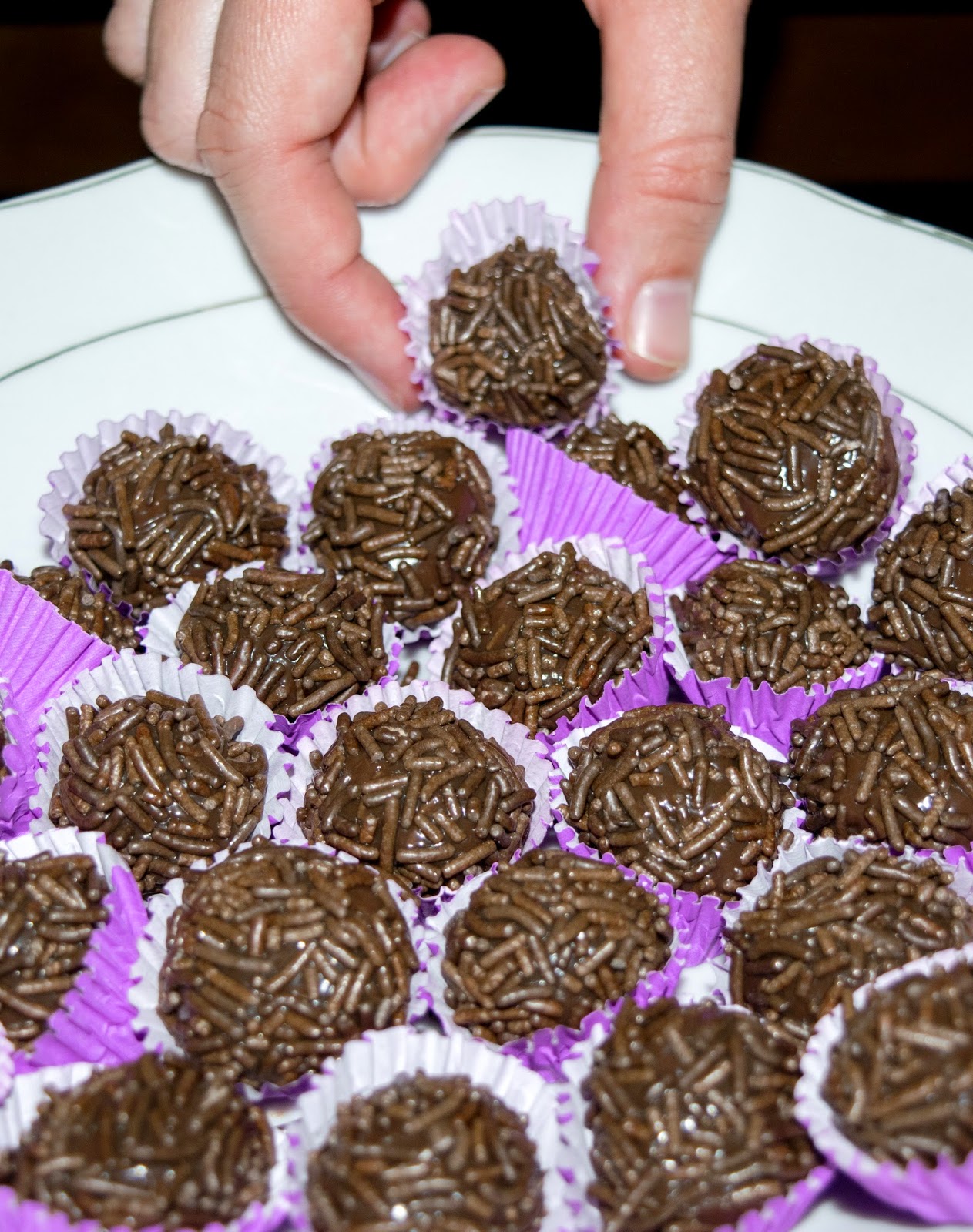 Amanda brought out a batch of truffles that she had made, that somehow had a magical marshmallow-like texture and were completely chocolate. We demolished them. After a hike like that, we had earned any treats that were offered.

After the chocolate and tea, we passed out, proud of our last day in Sucre.
Posted by Colleen Speed at 5:51 PM